Jobs goes on medical leave from Apple, Cook takes over

Apple CEO Steve Jobs said Wednesday that he will take a medical leave until the end of June to focus on his health. In the meantime, chief operating officer Tim Cook will take over day-to-day operations.

Apple CEO Steve Jobs said Wednesday that he will take a medical leave until the end of June to focus on his health. In the meantime, chief operating officer Tim Cook (right) will take over day-to-day operations. 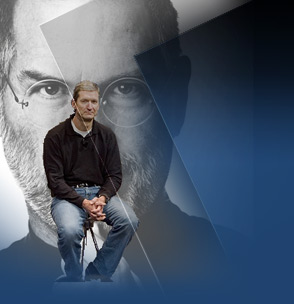 The news (Techmeme, Apple statement) is likely to start succession planning talk at Apple. Jobs is wrestling with “a hormonal imbalance” and speculation about his health has been rampant. Given the news it only seems prudent that Apple create and disclose a succession plan of some sort.

The timing of Jobs return is also notable since it’s an open question whether Jobs would make an appearance at Apple’s WorldWide Developer Conference this summer.

In an email to employees, Jobs wrote:

I am sure all of you saw my letter last week sharing something very personal with the Apple community. Unfortunately, the curiosity over my personal health continues to be a distraction not only for me and my family, but everyone else at Apple as well. In addition, during the past week I have learned that my health-related issues are more complex than I originally thought.

In order to take myself out of the limelight and focus on my health, and to allow everyone at Apple to focus on delivering extraordinary products, I have decided to take a medical leave of absence until the end of June.

I have asked Tim Cook to be responsible for Apple’s day to day operations, and I know he and the rest of the executive management team will do a great job. As CEO, I plan to remain involved in major strategic decisions while I am out. Our board of directors fully supports this plan.

I look forward to seeing all of you this summer.

In a nutshell, Apple will have almost six months without Jobs at the helm. The thing to watch will be how Apple’s product cycle goes. If Apple keeps churning out hits it’ll be a good sign for the future health of the company.

For now though Apple shares are taking a hit, down roughly 6 percent from their market closing price of $85.33.

Jobs’ email comes just a few days after a Macworld confab that was disappointing overall. Apple marketing chief Phil Schiller didn’t have a lot to work with in the announcement department.

Share: Jobs goes on medical leave from Apple, Cook takes over
By Larry Dignan
Larry Dignan is Editor in Chief at Celonis. He was most recently Vice President, Editorial and Editor in Chief at ZDNet. Prior to that he was executive news editor at eWeek and news editor at Baseline. He also served as the East Coast news editor and finance editor at CNET News.com. Larry has covered the technology and financial services industry since 1995, publishing articles in WallStreetWeek.com, Inter@ctive Week, The New York Times, and Financial Planning magazine. He's a graduate of the Columbia School of Journalism and the University of Delaware.