Leaderboard: The 12 best Android smartphones of 2010

A hot, new Android phone seems to hit the market almost every week. To help you sort through them all, here's our updated list of the 12 best Android smartphones, based on the quality and value of each device.

Because there’s a stampede of Android smartphones barreling into the market — including both excellent models and a few duds — many people feel overwhelmed when trying to choose one. I get a lot of the “Would you get this one or that one” questions as well as plenty of requests to rank my favorites.

So I’ve decided to do something a little dangerous — create a leaderboard of my top 10 Android picks. It’s dangerous because this is very subjective stuff. The smartphone that is the best fit for you is going to depend heavily on your needs and preferences.

But, since I’ve had my paws on virtually all of the Android devices and I’ve written reviews of the best ones, I’m going to rank them in terms of the overall quality of the devices, with much more emphasis placed on the smartphones themselves than on the wireless carriers that they’re tied to.

I also keep this leaderboard up to date. So, as I review new Android devices and decide that they deserve a place on the list, I will add them and bump other phones down or off the list. With this update, the new entrants to the list are the HTC Desire and the Motorola Droid Pro.

Caveat: This ranking is primarily based on US smartphones. In each country/region, the telecom carriers tend to name these devices by different names. In many cases you’ll be able to find a close match between the devices on this list and devices in your area, but not in all cases.

You can also view this list as a slideshow and see larger photos of each of the devices.

Pound-for-pound and feature-by-feature, there’s still nothing out there in Android land that can hang with the HTC EVO 4G. With its 4.3-inch WVGA screen, 8 megapixel camera, 1 GHz Snapdragon CPU, front-facing VGA camera, Micro HDMI port, 3G Wi-Fi hotspot, and 4G WiMAX capability, the EVO has it all. And, with its large on-screen keyboard and handy kickstand for watching video, it’s a device that’s easy and pleasant to use. When I reviewed it, I called the EVO “The Hummer of smartphones” because it’s so huge and it’s such a power hog, but there’s no denying that it is the elite device of the Android fleet.

This was the first Android device that really knocked my socks off, and I still use it as the gold standard to measure every other Android smarty. Sure, it doesn’t have the best battery life and its screen isn’t as big and bold as the HTC EVO or the Droid X, but it is remarkably elegant and usable and it remains the one Android phone untarnished by the mobile manufacturers and telecom carriers. Google no longer sells it on the mass market but offers the N1 as a testing phone for Android developers. Still, as I said, it remains the gold standard and as long as Google keeps selling it in one form or another, it will likely remain on this list.

The Samsung Vibrant snuck up on a lot of people. Samsung hadn’t produced many good smartphones in recent years. In fact, the Samsung Omnia was so bad that I rated it as one of the worst tech products of 2009. So when Samsung announced the Galaxy S, its first line of Android devices, expectations were fairly low. But, despite the marketing confusion of naming the Galaxy S something different (and giving it a slightly different configuration) on every carrier, the product has been a big hit, selling over a million units in its first 45 days on the market. The best of the Galaxy S models is T-Mobile’s Samsung Vibrant, which is thin, powerful, has a great screen, and does the least amount of fiddling with the stock Android OS.

This smartphone bears a very strong resemblance to the Nexus One and in the first half of the year it was released in Europe and Australia, where it became a popular choice in both markets. It has since spread to other international markets and became available in the US through regional carrier US Cellular. The Desire has nearly-identical hardware specs to the Nexus One and a very similar, high-quality outer shell that gives it an excellent build quality. The biggest differences are that the Desire has hardware navigation buttons instead of touch-sensitive buttons, an optical touchpad instead of a trackball, includes HTC Sense UI and an FM tuner, but lacks the second microphone for noise cancellation and the pins for a dock connector. Also, keep an eye on the HTC Desire HD (with a larger 4.3-inch screen) and the HTC Desire Z (with a slide-down keyboard).

One of the most anticipated US Android devices of 2010 was the Google Nexus One on Verizon. Unfortunately, it never happened — partly because Verizon dragged its feet to allow the unlocked Nexus One on its network and partly because Google was unprepared to handle the customer service responsibilities for the Nexus One. As a result, the maker of the Nexus One, HTC, released a similar device called the HTC Incredible (sometimes referred to as the “Droid Incredible”). It’s not quite as elegant or high-end as the Nexus One (or the HTC Desire), but the Incredible is still a solid workhorse of a smartphone.

With Sprint’s HTC EVO 4G drawing much of the attention of the Android world since its unveiling at CTIA 2010 in March, the response from Motorola and Verizon (the previous darlings of the Android world) was the Droid X. It matched the HTC EVO with a 4.3-inch screen, an 8 megapixel camera, a Micro HDMI port, and mobile hotspot functionality, but it lacked a front-facing camera, 4G connectivity, and the extra polish that HTC puts on Android with its Sense UI. 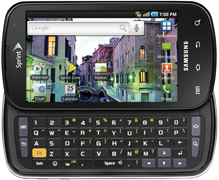 This version of the Samsung Galaxy S is the one that departs most significantly from the standard form factor. That’s mostly because it integrates a full 53-key slide-down hardware keyboard. But it’s not just any keyboard. With it’s large keys and dedicated row for number keys, it is arguably the best hardware qwerty on any Android device. It also features a 4-inch Super AMOLED screen, a zippy 1 GHz Samsung processor, and Sprint’s 4G WiMAX service. I could certainly make a case for ranking this phone as high as number three on this list.

No Android device has taken aim at business users more directly than the Motorola Droid Pro. The most obvious symbol is the Droid Pro’s hardware keyboard, which effectively emulates the classic BlackBerry keyboard found on devices such as the BlackBerry Bold and the BlackBerry Curve. The Droid Pro also integrates enhanced security and management features (such as remote device wipe) that will appeal to larger organizations and their IT departments. These features don’t quite bring Android up to the same level of enterprise readiness as BlackBerry (which offers even stronger encryption, for example), but many companies will likely view it as good enough. While the 3.1-inch screen of the Droid Pro is among the smallest of Android devices, this device will definitely appeal to those users who cling to the idea that they want and need a hardware keyboard, especially BlackBerry converts.

The other Samsung Galaxy S to make this list is AT&T’s Samsung Captivate, which has virtually all of the same internals and specs as the Samsung Vibrant but has a flatter, boxier form factor. The thinness of the Captivate combined with lots of punch and high-end features make this a very attractive phone. I actually prefer the design of the Captivate over its cousin the Vibrant (No. 3 on this list). However, AT&T has loaded it up with a ton of AT&T crapware that users cannot uninstall, and even worse, has restricted the device so that users can’t “side-load” apps that are not in the Android Market. T-Mobile doesn’t commit either of those two sins with the Vibrant, and that’s what makes it a better choice. 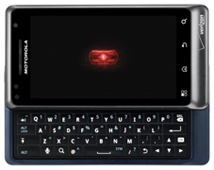 The fact that this phone is all the way down at number seven on this list is an indication of just how competitive the Android market has become, because this is an excellent smartphone. The original Droid really kick-started the Android revolution and remained one of the best-selling Android devices on the market throughout the first half of 2010. The Droid 2 simply updates the design slightly, improves the keyboard, and replaces the internals with more powerful hardware. For those who prefer a physical keyboard and Verizon’s top-notch coverage, the Droid 2 remains a great choice.

The HTC Aria might be one of the best kept secrets of the Android world. HTC could have honestly named this phone the EVO Mini. It looks a lot like the EVO, but in a far smaller package. In fact, while the EVO is the biggest Android phone, the Aria is the most compact, with its 3.2-inch screen. That’s its primary appeal — along with a low price tag (it retails for $129 but you can usually find it for much less than that, even free, based on promotions). The biggest problems with the Aria are the underpowered 600 MHz CPU and the fact that, like the Galaxy S, AT&T has loaded it up with lots of crapware and limited it to only the applications in the Android Market.

The LG Ally is not very pretty — except for being pretty underpowered — but it does have a few redeeming qualities that can make it attractive. It has a great little hardware keyboard — the best hardware keyboard on an Android device next to the Epic 4G. It’s also very compact, though not as compact as the HTC Aria, since the Ally has the slider keyboard that makes it a little more bulky. But, the best feature is the price: $49. And, like the Aria, many customers will get it for free with the right promotion. For 50 dollars or less, this phone is a nice value.

Share: Leaderboard: The 12 best Android smartphones of 2010
By Jason Hiner
Jason Hiner is Editorial Director of CNET and former Editor in Chief of TechRepublic. He's co-author of the book, Follow the Geeks.