Learn what you need to know about cabling and Cisco networking

When your routers and switches are working as expected, you don't think too much about cables. But when you're troubleshooting a problem or making a change, cabling plays a more important role. David Davis goes over some cabling basics and discusses Cisco console port cabling.

Cables form layer 1 of the network — the physical layer. Properly connecting cables is fundamental to healthy network communication. Faulty connections could interrupt service or cause packets to be dropped. Without a clear understanding of cabling, you won’t be able to troubleshoot or design your LAN or WAN. Additionally, knowledge of cable types is important for certification tests like the Cisco CCNA/CCENT.

Now, how is cabling for Cisco routers and switches different?

There are a few differences between Cisco cabling and other network device cabling. Two things immediately come to mind:

One of the most confusing things to Cisco newcomers is the concept of the console cable. Other SMB and home-networking devices don’t usually have a console port. With those devices, they receive a DHCP IP address and then you can configure them over the network from there. With Cisco devices, there is no IP address on the device, and you must first use the console port and console cable to configure the router, switch, or firewall OOB (out of band).

Below, you can see the pin out of a console cable. The console cable is a “rolled” cable, because if you look at the pins from one end to the other, it is as if the end was rolled over (the order is flipped), as in Figure C. 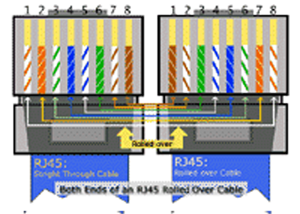 Traditionally Cisco console cables were RJ45-RJ45 and then you would use a RJ45-DB9 adaptor to connect it to your PC’s serial port (COM port). Today, new Cisco devices come with console cables that have a DB9 adaptor integrated/molded to the cable on one end (Figure D). Keep in mind that the data moving across the console cable is serial data (not Ethernet).

While what I said above concerning console cables is true for most Cisco devices, there are variations on the console cable. For more detailed information about Cisco console and AUX port cabling (including the pin-out for a console cable so that you can make your own), see this Cisco document Cisco Cabling Guide for Console and AUX Ports.

David Davis has worked in the IT industry for 15+ years and holds several certifications, including CCIE, CCNA, CCNP, MCSE, CISSP, VCP. He has authored hundreds of articles and numerous IT training videos. Today, David is the Director of Infrastructure at Train Signal.com. Train Signal, Inc. is the global leader in video training for IT Professionals and end users.

Delivered Weekdays
Sign up today
Share: Learn what you need to know about cabling and Cisco networking
By daviddavis