Here's a closer look at some of the technology and design changes made during Microsoft Asia Pacific's Singapore office remodel.

My post about Microsoft Asia Pacific drastically redesigning its Singapore office by removing cubicles, private offices, and desktop phones generated a lively debate among TechRepublic members. Some readers have pointed out the poor ergonomics of the office’s cafe-style chairs, while others commented that the setup would not work in all environments or for all businesses. On the other hand, there are readers who think Microsoft’s approach is the how all offices should be designed.

As a follow up to that piece, I identify some of the technologies the Microsoft Asia Pacific has implemented in its Singapore office in order to realize its vision of a collaborative workplace.

The server room is cooled by chilled water piped in from the central air-conditioning system of the office building. While unorthodox, it is my understanding that it was set up using the office’s existing cooling capacity with no permission required from building management.

In addition, most meeting rooms are clustered around the center portion of the level, which allows for more sunlight and a brighter office environment. During my tour of the space, I noticed meeting rooms were generously adorned with power points, and I spotted smaller rooms implementing a handy power point that retracts back inside the desk grommet when not in use.

The large screen LCD TVs in meeting rooms also caught my attention. I only recall seeing one projector, which is in a conference room that is large enough to seat 25 comfortably. On reflection, the decision to swap projectors for LCD TVs appears to be a smart one, given their ease of deployment even in small or oddly shaped rooms. Moreover, LCD displays also generate less heat, are much quieter since they don’t come with cooling fans, and produce brighter, more vibrant images. 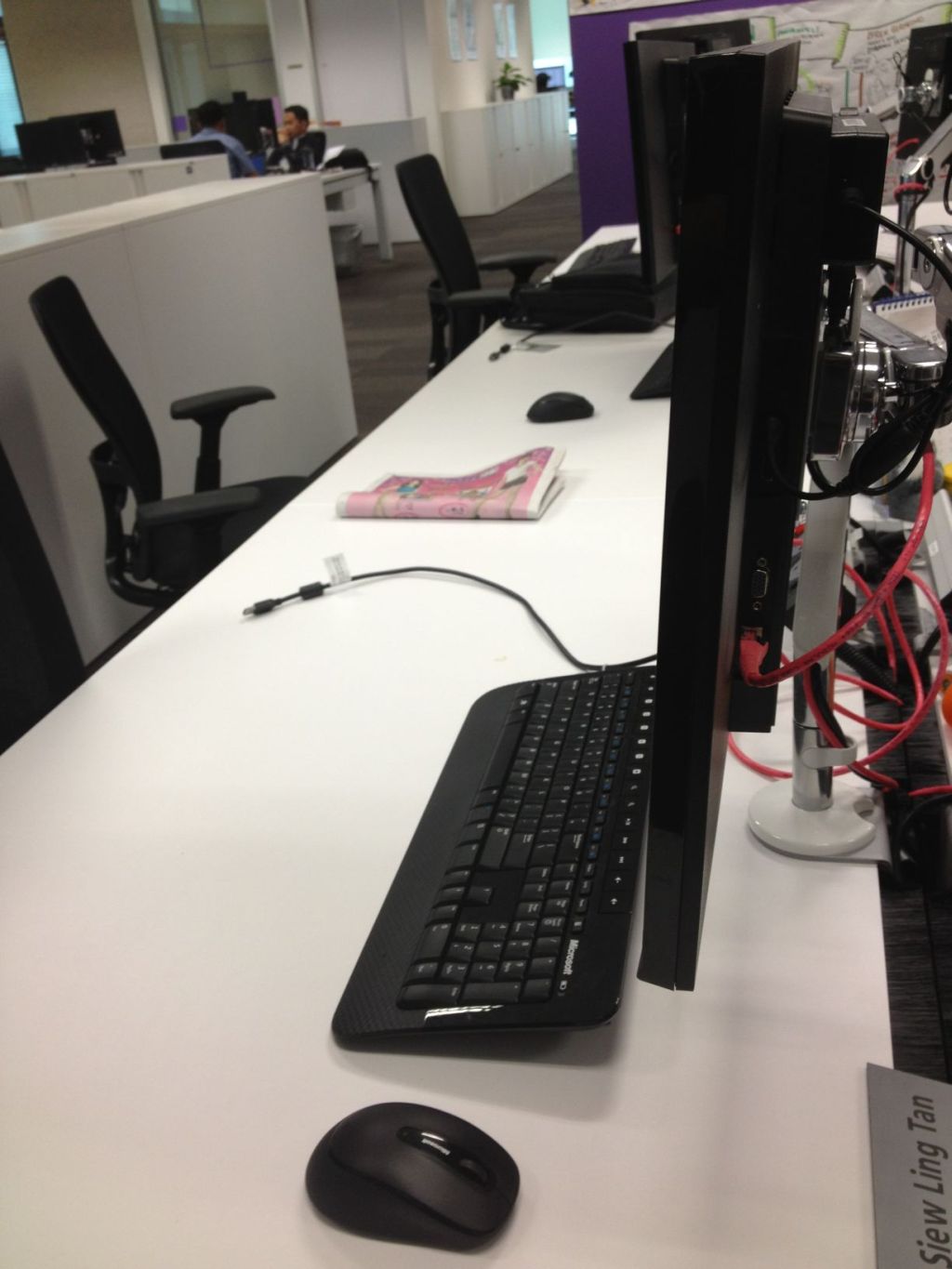 To support the laptop environment, free-access “workstations” come equipped with large LCD monitors held in place by an adjustable monitor arm. Made by Samsung, the displays are embedded with technology from DisplayLink to drive an external display via a USB port. Wired network connectivity is also offered, while the additional USB ports allow for a pair of USB transceivers for the wireless keyboard and mouse found at each desk.

To use a workstation, an employee needs to plug in a USB 2.0 cable to enable the external LCD monitor and bring the wireless keyboard and mouse online. Two power points on the table top offers convenient access to power.

View the TechRepublic photo gallery, A closer look at Microsoft Asia Pacific’s Singapore office revamp, to learn about more of the technology and design changes made during the remodel.

All photos by Paul Mah for TechRepublic

Delivered Weekdays
Sign up today
Share: Microsoft Asia Pacific’s Singapore office revamp: More design and tech changes
By Paul Mah
Paul Mah is a writer and blogger who lives in Singapore, where he has worked for a number of years in various capacities within the IT industry. Paul enjoys tinkering with tech gadgets, smartphones, and networking devices.