Microsoft cries uncle when it comes to bundled Windows 7 features

In my recent TechRepublic Microsoft Windows blog, “Be Ready for New and Improved Applets in Windows 7,” I told you that three of the four standard Windows applets have been endowed with some new features and updated user-interface components. In the ensuing discussion, many of you grumbled about having to put up with Windows default applets.

Well, for those of you who grumbled and for those of you who over the years have opted not to use, but still had to contend with, the Windows operating system’s default applets and features, have I got news for you! With the recent Release Candidate for Windows 7, Microsoft has finally given us more control over what Windows features we can turn off. They have also completely removed some features from the operating system.

As such, I think it is safe to say that Microsoft has finally given in to the demands of those Windows users who really want to be able to choose which features they want to use. (Antitrust lawsuits may have been a factor too.)

Gone with the wind

Let’s begin with what features are no longer a part of the operating system. Movie Maker, Windows Calendar, Windows Mail, and Windows Photo Gallery are gone. However, they can be installed or run from Windows Live. As you know, Mail, Photos, and Calendar are already an active part of Windows Live and have been for a while. Movie Maker is the new addition, and it is now available as a beta on the Windows Live site (http://download.live.com/moviemaker).

In Windows Vista, the utility was renamed Windows Features and the user interface was streamlined with a single tree structure. And while it allowed you to disable more than XP (mainly because it had more optional features) it still did not allow you to remove features that Microsoft considered main features of the operating system.

In Windows 7, the Windows Features does allow you to remove several of those main features. And, as you can see in Figure A, the real stunner here is that you can now turn off Internet Explorer. 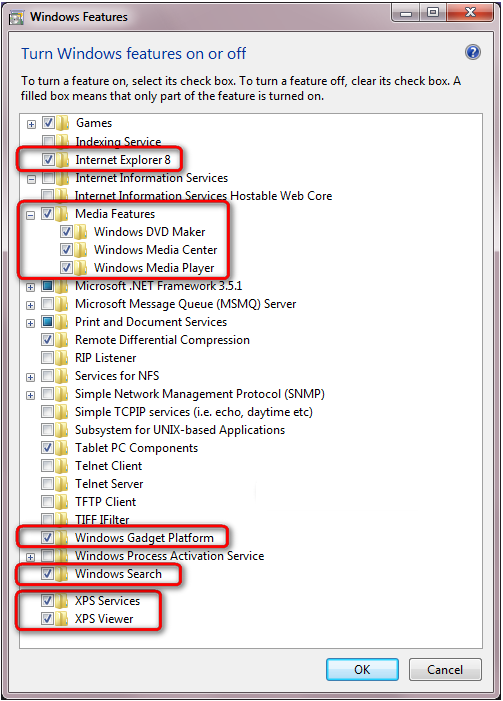 You can now disable a multitude of standard features in Windows 7.

If you would rather use Firefox or Chrome as your main Web browser, you can just clear the Internet Explorer 8 check box to turn it off. And that’s just the beginning!

If you would rather use Nero to burn your DVDs, you can clear the Windows DVD Maker check box. If you don’t have a need for Windows Media Center, you can turn it off. If you prefer iTunes, disable Windows Media Player.

Wow! You really now have a choice!

What does turning off really mean?

As you can imagine, turning off is not the same as uninstalling. And, since the feature must be installed in order for you to be able to turn it off, this is not the same as picking and choosing during Setup. According to Microsoft’s Engineering Windows 7 Blog:

“If a feature is deselected, it is not available for use. This means the files (binaries and data) are not loaded by the operating system (for security-conscious customers) and not available to users on the computer.”

They further back up the advantage of turning off an installed feature as opposed to uninstalling it with:

“These same files are staged so that the features can easily be added back to the running OS without additional media.”

Oh, I almost forgot… While you can turn off more than you would have imagined in Windows 7, Notepad, WordPad, Calculator, and Paint are not among the features you can turn off and will stay where they are. At least three of the four have new features and new interface designs.

Do you regularly use third-party replacements for Windows’ built-in features? Does the capability to turn off main features in the operating system make Windows 7 more enticing? As always, if you have comments or information to share about this topic, please take a moment to drop by the TechRepublic Community Forums and let us hear from you.

Delivered Weekdays
Sign up today
Share: Microsoft cries uncle when it comes to bundled Windows 7 features
By greg shultz
My first computer was a Kaypro 16 \"luggable\" running MS-DOS 2.11 which I obtained while studying computer science in 1986. After two years, I discovered that I had a knack for writing documentation and shifted my focus over to technical writing.