After using the Microsoft Project Professional 2013 Preview, Will Kelly reports back on a handful of appealing new features and tools.

Microsoft Project Professional 2013 is due to launch alongside Microsoft Office 2013 in early 2013. The improvements due in this upcoming release should do a lot to help project managers and their teams centralize project information, collaborate better, and present that information to managers, stakeholders, and partners. I’ve been using the Microsoft Project Professional 2013 Preview since it became available, and here is an overview of some of the software’s new features.

Reporting tools are becoming an even more important feature in project management applications, as many companies drill down further into the details of even well-run projects to see how their budgets are being spent. Accountability is huge right now, and improved reporting tools can give you the best views of project information and help you communicate it to management, the customer, and the rest of your team.

Project Professional 2013 offers improved reporting tools that maintain the Office-like experience, making it easier for users of all levels to see and publish project information in a view that works for them. These tools offer dashboard-like reporting options.

Figure A is an example of the Project Overview report. While this isn’t necessarily a feature for advanced Microsoft Project users, it does provide a better opportunity for experienced users to open up the application to other team members to create these reports within a couple of clicks. Easier to use Microsoft Project reporting tools can go far in dispelling Microsoft Project’s history of being difficult to use and “for project managers only.”
Figure A 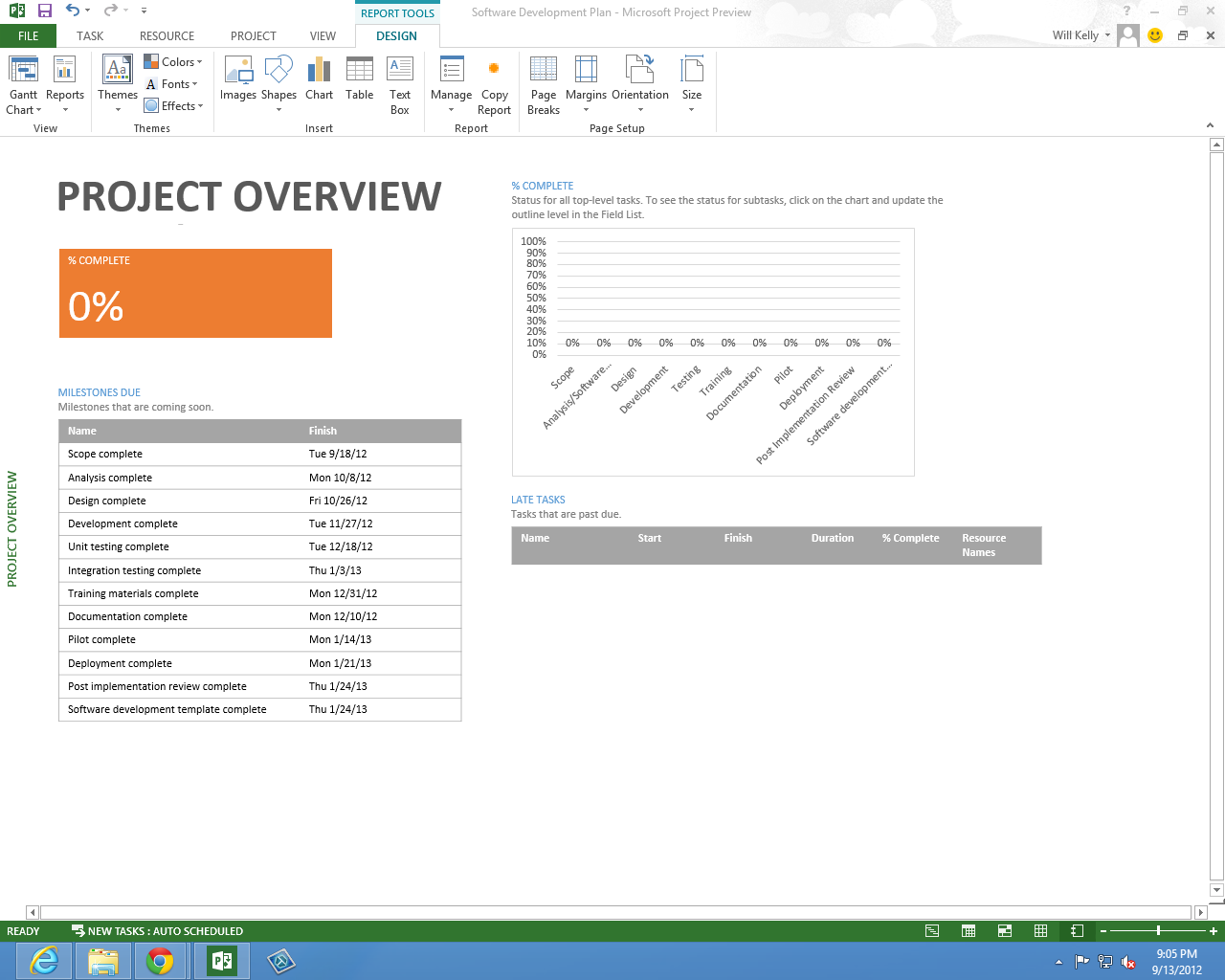 A lack of integration with other Microsoft Office applications, SharePoint, and Office 365 has been hampering Microsoft Project for some time. Project management information has a vibrant life outside of Gantt charts, but Microsoft Project has a notorious reputation in some organizations.

Microsoft made a much-needed step to get project data to the cloud through Office 365 and SharePoint. This integration is especially important to remote workers, because it enables the sharing of project data through a dedicated project team site. It also means task list synchronization between Project Professional 2013 and Office 365.

While this is a wonderful first step, some project teams may have to change the way they work to get the full benefits of Microsoft Project 2013/Office 365 integration. Figure B is an Office 365 project site populated with data from Project Professional 2013.
Figure B

The Project Summary view on an Office 365 project site. (Click the image to enlarge.)

Some compliance programs and special projects may have their own particular schedule requirements, so templates can still come in handy. Microsoft Project Professional 2013 includes an ever-growing library of Project templates on Office.com, a Microsoft-owned Office online resource (Figure C). The missing piece here is a tutorial or other bit of user assistance (no, not an online video) to guide novice users through breaking down a Project template and repurposing it for their own project scheduling needs.
Figure C

New project templates are available in Project Professional 2013. (Click the image to enlarge.)

While Project 2010 offered a better way for getting scheduling data out of Project and into Microsoft Word documents and PowerPoint slide decks than previous versions of Project, there was still room for improvement. Microsoft has done just that in Project Professional 2013 with the Timeline view (Figure D), which offers better visualization tools and better options for designing and printing reports.
Figure D

The Timeline view in Project Professional 2013 (Click the image to enlarge.)

The new Task Path feature might be helpful for project managers handling large, complex schedules, because it enables seeing the path for a specific task including: Predecessors, Driving Predecessors, Successors, and Driven Successors.

Office 2013 is getting its own online app store called the Office Store that promises both Microsoft and third-party add-ins for Project 2013. There is very little information about the Office Store at the time of this writing.

Usually, Microsoft Project is part of a corporate Windows PC foundation, installed as part of a software push or through sneaker net. Now Microsoft is also planning to offer Project Pro for Office 365, with the same features as Project Professional 2013, but allowing users to install Project on multiple PCs in the office or at home. Changing how users can install Microsoft Project 2013 may go well in some organizations and even foster broader acceptance of Microsoft Project; however, organizations with locked down desktops aren’t going to be able to escape the help desk ticket and visit from the IT pro to install the software.

Project on Demand’s potential is appealing, but it makes a Project 2013 mobile client app seem conspicuously absent. After all, Microsoft is offering more flexibility where a user installs Project, but mobile support is still nowhere to be found.

Delivered Weekdays
Sign up today
Share: Microsoft Project Professional 2013 new features preview
By Will Kelly
Will Kelly is a freelance technical writer and analyst currently focusing on enterprise mobility, Bring Your Own Device (BYOD), and the consumerization of IT. He has also written about cloud computing, Big Data, virtualization, project management applications, Google Apps, Microsoft technologies, and online collaboration for TechRepublic and other sites. Will also works as a contract technical writer for clients in the Washington, DC area and nationwide. Follow Will on Twitter: @willkelly.