Microsoft appears poised to officially unveil a Web-based service that will let users store, share, and back up data from their mobile phones.

Microsoft appears poised to officially unveil a web-based service that will let users store, share, and back up data from their mobile phones.

Provided, that is, that the phones run Microsoft's Windows Mobile 6 phone operating system. And the service will be available as only a limited beta to start with.

Details of Microsoft's impending My Phone service slipped out inadvertently when the website went live ahead of its scheduled debut. The site appears to have been spotted first by Engadget Mobile, which also referred to the service as SkyBox. 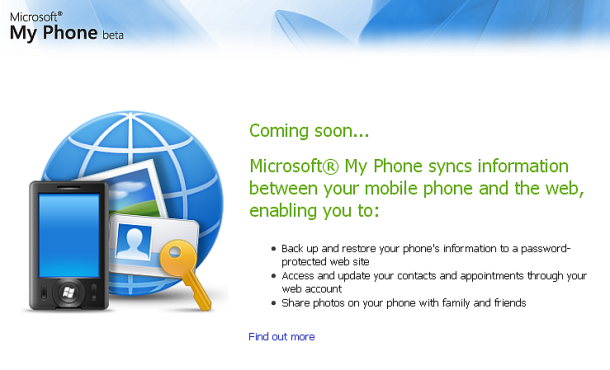 Microsoft's My Phone service is intended to provide backup and other services for Windows Mobile 6 users.

According to the Microsoft My Phone site, the service will let users back up and restore the phone's data, access contact and scheduling information, and share photos. Users will get 200MB of free storage, but beware -- a synchronisation attempt that exceeds the limit will cut off any files beyond the 200MB mark.

Matthew Miller at ZDNet got confirmation of the coming My Phone launch from Microsoft. Here's an excerpt from the company statement, via Miller:


(W)e are excited about the new Microsoft My Phone service, which will be available as a limited, invite-only beta. This is a significant milestone for Microsoft as it connects the phone to the PC and Web, making mobility a key pillar for the company's software+services strategy.

More details about the service are due at the Mobile World Congress in Barcelona in mid-February.

Last month, Microsoft's top Windows Mobile executive, Andy Lees, told CNET News' Ina Fried that the company would be using the Barcelona event to unveil the first steps in a renewed mobile phone strategy, including services that help connect the phone to the PC and web.

Last week, Microsoft said that it has no plans to make a phone.