It was another busy week in the mobile space. Here are the stories that grabbed my attention this week.

The biggest story of the week was the announcement from NPD that Android had moved ahead of iPhone OS in terms of smartphone operating system market share. The new rankings are:

Apple has achieved its 21% with only one device (in a handful of flavors) on one carrier, while Android has the benefit of being on more carriers with more devices. Also, several carriers, including Verizon, have offered buy-one-get-one-free deals on Android devices.

Apple responded to the NPD data by trying to change the subject (and lump in iPod touch sales into its numbers). Apple said:

“This is a very limited report on 150,000 US consumers responding to an online survey and does not account for the more than 85 million iPhone and iPod touch customers worldwide. IDC figures show that iPhone has 16.1 percent of the smartphone market and growing, far outselling Android on a worldwide basis. We had a record quarter with iPhone sales growing by 131 percent and with our new iPhone OS 4.0 software coming this summer, we see no signs of the competition catching up anytime soon.“

If Apple continues to be an AT&T-only device, expect Android to widen its lead.

iPhone rumors getting out of control

iPhone news, rumors, and speculation were everywhere this week.

First, it was revealed that Apple and AT&T signed a five-year contract back in 2007. This lead to speculation that the rumored Verizon iPhone would not be arriving any time soon.

Next came speculation that Apple will launch the new iPhone hardware on June 22, 2010. While the device is expected to be announced at the Apple Worldwide Developer’s Conference (which takes place June 7-11, 2010), Apple also has a mystery event scheduled for June 22, 2010 at the Yerba Buena Arts Center. Coincidentally, many iPhone customers have noticed that their upgrade eligibility date (the date when they can upgrade their iPhone hardware) on AT&T’s Web site mysteriously changed from November 21, 2010 to June 21, 2010. It seems the stars are aligning for new iPhone hardware being announced and launched next month.

In another interesting iPhone story, rumors surfaced that Verizon has ad agency Landor Associates is preparing for a summer launch of an Apple handset. This lead to speculation that the original five-year contract between AT&T and Apple may have been amended; or it could mean that Apple has created a new device for Verizon that wasn’t covered under the original contract.

Finally, a video emerged from Vietnam showing the rumored iPhone 4G. As with the iPhone prototype that Gizmodo got their hands on a few weeks ago, this one doesn’t have a bootable operating system. There is still plenty to see, though. The hardware design offers quite a few changes from the current iPhone including a forward-facing camera. Here is a video showing showing off the device.

Expect the Apple rumors to build through the summer. Whether you’re an Apple fan or not, it is always interesting to see the buzz the brand generates with every new product.

The most anticipated device of the summer (for me, at least) is the upcoming Sprint EVO 4G. It will be the most powerful smartphone on the planet when it launches. There isn’t a firm launch date yet, but more details continue to leak out.

First, it was revealed that Radio Shack will offer EVO 4G pre-orders at some point in May. Then, AndroidGuys.com obtained an internal Sprint training presentation confirming the specs and revealing a few new things, including: 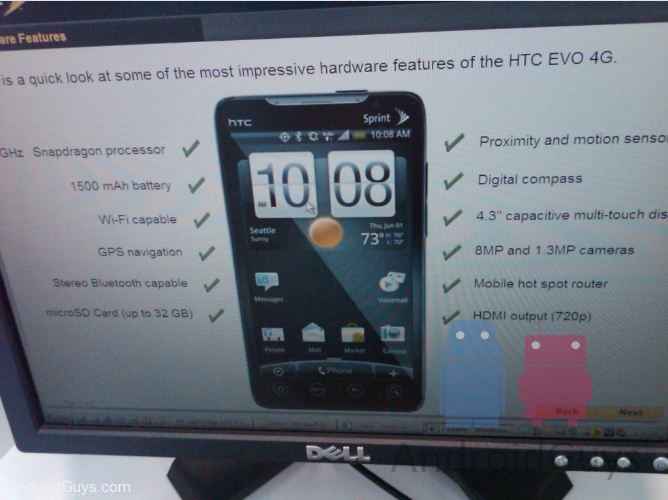 Still no official launch date yet, but it has been suggested that Sprint will launch prior to any iPhone announcements at the Apple Worldwide Developer’s Conference on June 7.

What mobile stories caught your eye this week?

Get smartphones tips and news in your inbox
TechRepublic’s Smartphones newsletter, delivered each Thursday, features tips on how to deploy and manage smartphones in your enterprise, product reviews, news updates, photo galleries, and more. Automatically sign up today!