Microsoft's NTttcp and NetCPS offer a quick and easy way to gauge the peformance of a network between two hosts in a listener and sender configuration. Rick Vanover introduces you to these two handy tools.

Free network tools abound, and here are a couple more that give you a quick and easy look at network performance. Rick Vanover shows us the Microsoft tool NTttcp and NetCPS.

In a recent post, I mentioned the iperf open source tool that allows for quick and easy network testing. TechRepublic members have had positive feedback for these types of tools, so I want to show two more tools that can be used for similar tasks, Microsoft’s Network Performance Tool (NTttcp) and NetChain’s NetCPS.

Microsoft’s NTttcp test tool is effectively iperf on steroids and optimized for Windows environments. NTttcp does one better in correlating in CPU usage for a network task as well as allowing mapping to CPUs for systems with multiple processor capability. Futher, NTttcp has specific versions for 32-bit (x86) platforms, 64-bit (x64), and IA-64 platforms. NTttcp is a free download for Windows XP, Windows Server 2003, Windows Vista, and Windows Server 2008 systems. The first thing you want to do after installing NTttcp is to rename some of the files.

In the accompanying white paper for NTttcp, it mentions that the executable, Ntttcp_x86.exe (for 32-bit systems), will need to be renamed or copied to Ntttcps.exe for a sender and Ntttcpr for a receiver. For the tool, this is somewhat of an underdevelopment, as iperf can function as a listener or a receiver with a simple parameter. Coincidentally, iperf and NTttcp both use the same default port, 5001, for their tests. Figure A shows running the NTttcp process as a receiver. 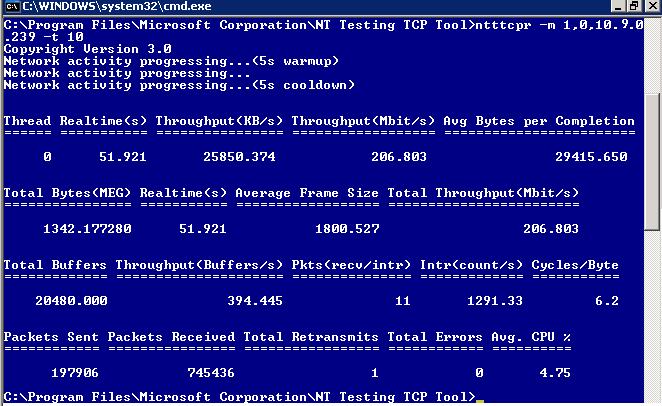 Another handy tool that is quick and easy like iperf is NetCPS. NetCPS does effectively the same things as iperf but without the Java-based GUI of Jperf when running iperf. Even though NetCPS is over 10 years old, I still think it is a good tool for Windows systems to do a quick test of network performance from the command line with no installation requirements. NetCPS also has separate instances of the process that run as a client and as a server. Figure B shows running NetCPS between two systems on a fast network.

NetCPS is an oldie but a goodie, and between iperf and NTttcp, most basic network testing can be performed to give a good baseline of network performance. Are there more tools that you would like shown here? If so, leave a comment below and we’ll cover them soon.