Greg Shultz shows you how to use Paragon Go Virtual to move your Windows XP installation into Windows 7 and run it with Windows Virtual PC.

Would you like to be using Microsoft Windows 7, but are sticking with Windows XP because you have been using it for close to 10 years and have a lot invested in it? Well, what if I told you that you could easily move your existing Windows XP system to a virtual machine that you could then run in Windows 7? Well you can, with Paragon Go Virtual — and the best part is that it won’t cost you a penny.

Paragon Go Virtual is a conversion tool that creates virtual machines which can be run by VMware Workstation/Player or VMware Fusion on a Mac, Microsoft Virtual PC, or Oracle VirtualBox. The software comes in both 32-bit and 64-bit versions, and in addition to converting Windows XP into a virtual machine, it can also convert Windows 2000, Windows Vista, and Windows 7.

In this edition of the Windows Desktop Report, I’ll show you how to use Paragon Go Virtual, which is a free tool, to move your Windows XP installation into Windows 7 and run it with Windows Virtual PC.

You can download Paragon Go Virtual from the Paragon Software Group or directly from the TechRepublic Software Library: 32-bit version or 64-bit version.

Keep in mind that while the software package is indeed free, during the installation procedure you will be asked to register in order to receive a serial number and a product key. Also keep in mind that the free version is designed for single-system virtual migrations and not meant for commercial usage.

If you require more features than are available with the free edition, then you should investigate Virtualization Manager 2010 Professional version, which sells for $69.95 and allows you to use it on up to three systems.

If you need larger scale virtual migrations, then you should look at Paragon Software Group’s Virtualization Manager 2010 Corporate version, which comes in a variety of licensing options that can support servers and workstations.

Editor’s note: In a previous blog post, Greg showed you how to use virtualization and Zinstall XP7 to migrate an entire Windows XP installation over to Windows 7.

In order to ensure a successful virtual machine transition, there are several tasks that you’ll want to perform on your Windows XP system in preparation for the operation. Let’s take a closer look.

Paragon Go Virtual installation is a snap, and after a reboot, you’ll be ready to create your virtual machine — just use the desktop shortcut to launch it. When you see the initial screen, shown in Figure A, you’ll select the first option: P2V Copy. (The P2V Adjust OS option is designed to revive a botched conversion as well as to make Windows Vista/7 backups bootable on virtual hardware. Keep in mind that I did not evaluate either of the P2V Adjust OS options at this time.) 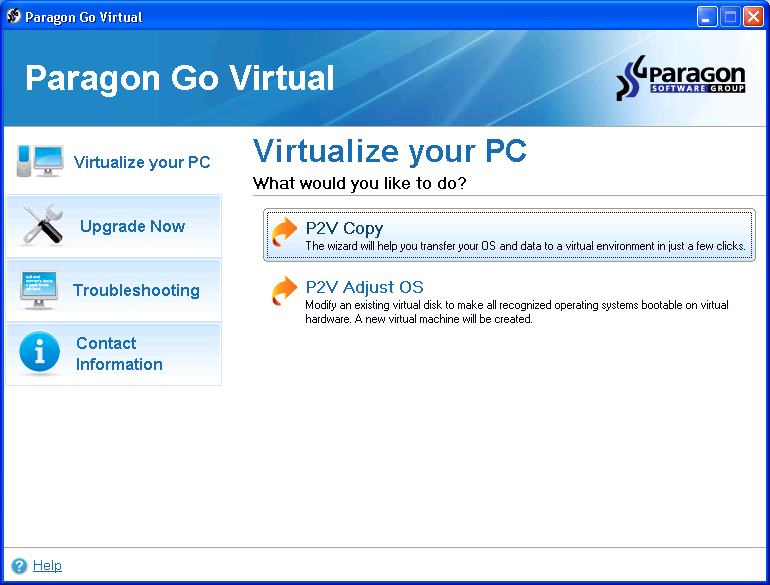 In order to convert your existing system to a virtual machine, you’ll select the P2V Copy option.

After you work through the P2V Copy Wizard Welcome screen, you’ll be prompted to choose the hard disks that you want to convert to a virtual machine. As you can see in Figure B, on my example system, I’ll be converting a Maxtor 80GB hard disk. 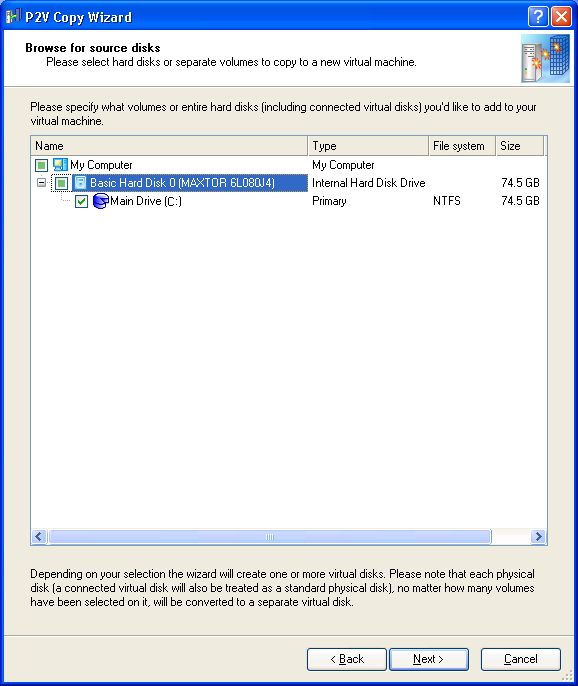 The P2V Copy Wizard will prompt you to select the disk that you want to copy to a virtual machine.

When you click Next, the P2V Copy Wizard will identify the guest operating system and prompt you to choose the software that you will use to run the virtual machine on the host system. Since my example Windows XP system is under the 128GB virtual hard disk size limit for Windows Virtual PC, I have chosen Microsoft Virtual PC, as you can see in Figure C. As such, I’ll be able to run my XP system in Windows 7 natively using the Windows Virtual PC. Now, if your Windows XP system is larger than 128GB, you’ll want to use something like VMware Player to run the virtual machine on the host system. 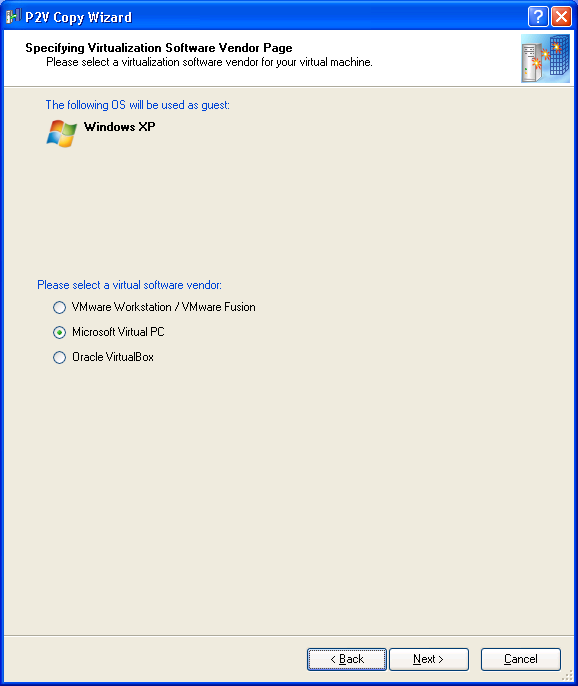 Paragon Go Virtual can create virtual machines that can be run by VMware Workstation/Player/Fusion, Microsoft Virtual PC, or Oracle VirtualBox.

When you click Next, you can specify the Virtual machine version, name, and hardware, as shown in Figure D. As you can see, I have selected Microsoft Virtual PC 7 as the virtual machine version and left the CPU and memory amount settings at the default values, so that they match my existing physical system. 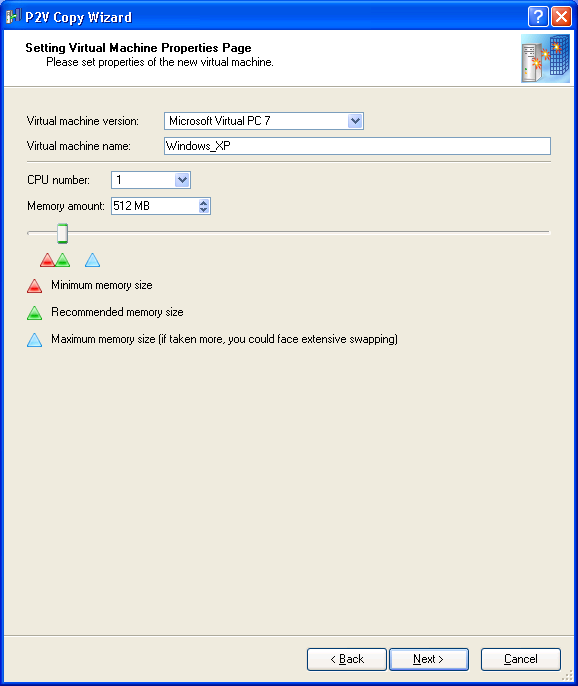 Based on your virtual software vendor selection, you’ll then need to specify the Virtual machine version.

When you click Next, you’ll be prompted to set the virtual hard disk properties. Again, I have accepted the default values. However, you can click the Tools icon and resize the hard disk to make it as large as the virtual software supports. Since I selected Microsoft Virtual PC, I can increase the size of the hard disk up to 128GB, as shown in Figure E. 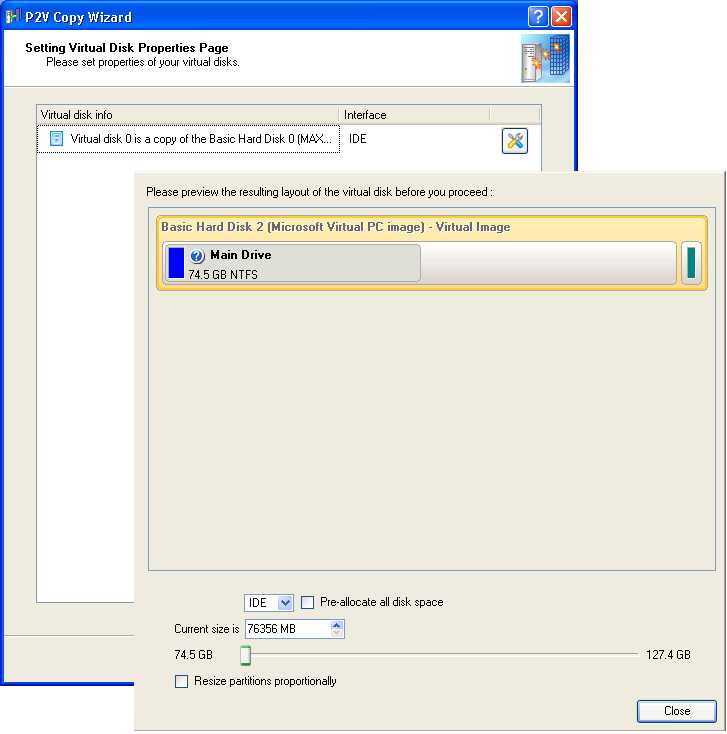 If you click the Tools icon, you can resize the hard disk to make it as large as the virtual software supports.

You’ll then be prompted to select a folder in which to create the virtual machine. As you can see in Figure F, I have chosen an external USB hard disk. Doing so will make it easy to transport my virtual machine over to my Windows 7 system. 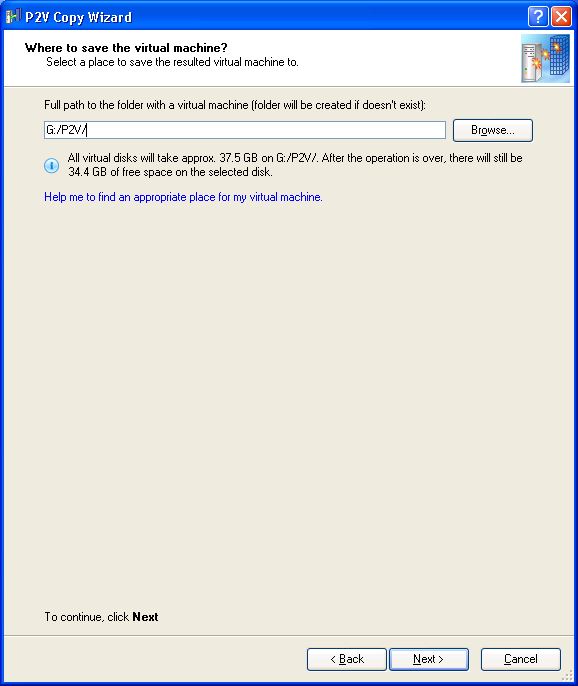 Using an external USB hard disk as the destination will make it easy to transport my virtual machine over to my Windows 7 system.

Once you click Next, the actual conversion procedure will begin. Throughout the process, the P2V Copy Wizard will let you know what is happening in the Operation Progress panel. The animated status bar along with the figures will let you know the elapsed time as well as the time remaining, as shown in Figure G. 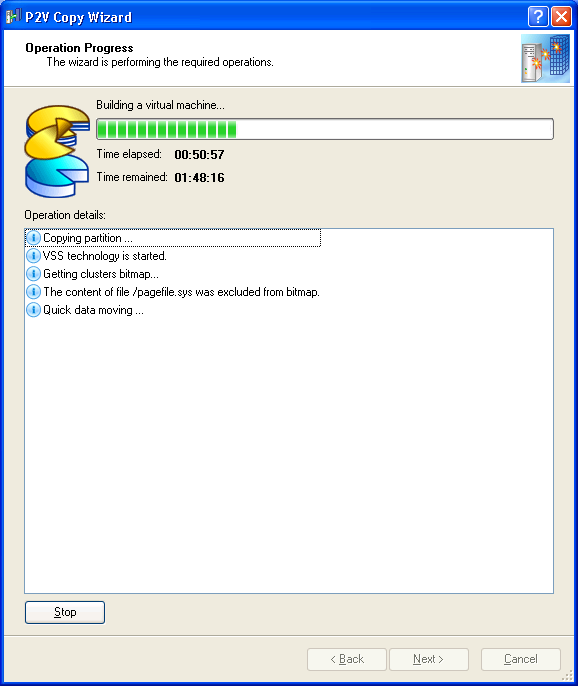 The Operation Progress screen keeps you apprised of the conversion procedure.

Depending on how large your hard disk is and the location of your destination folder, the process can take a long while to complete. For instance, my XP system with about 40GB on an 80GB drive took just a little over two hours to complete the conversion and transfer to an external USB hard disk. When the operation is complete, you’ll see the screen shown in Figure H. 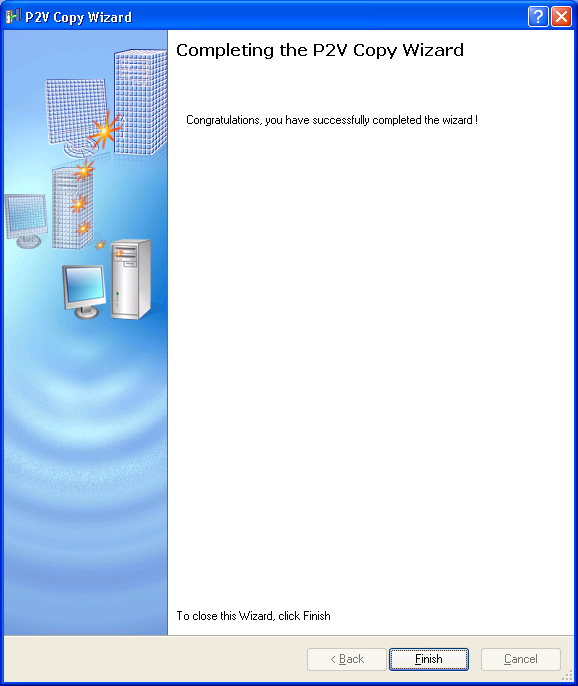 Once I copied my virtual Windows XP system’s files (Windows_XP.vmc and vdisk0.vhd) over to my Windows 7 system, launching and running Windows XP was a snap. I just double-clicked the Windows_XP.vmc, and in a moment, Windows Virtual PC converted the .vmc file to a .vmcx file and Windows XP began booting up.

Of course, I had to do a bit of tweaking in order to get my XP system running, and because XP was now running on a new system, I had to reactivate Windows XP. However all of that was relatively painless and I was able to run my existing Windows XP installation in Window 7, as shown in Figure I. 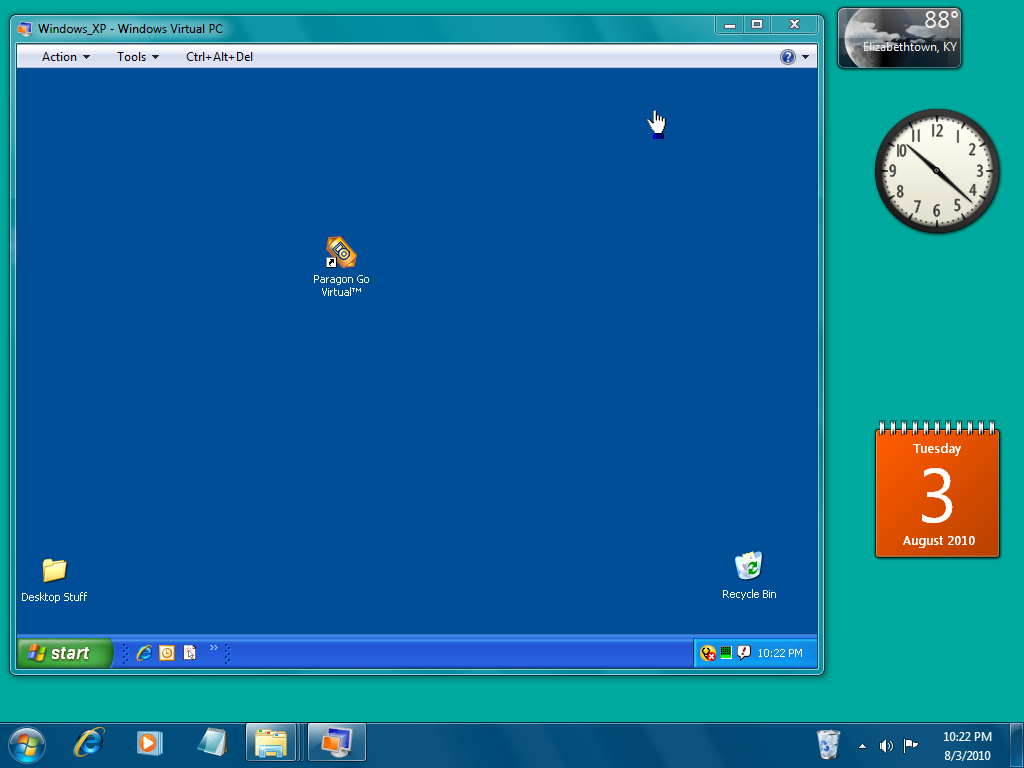 Windows XP running inside of Windows Virtual PC in Windows 7.

Will you use this technique to virtualize your Windows XP system? Have you used Paragon Go Virtual or Virtualization Manager 2010 Professional before? As always, if you have comments or information to share about this topic, please take a moment to drop by the TechRepublic Community Forums and let us hear from you.

Share: Move your entire Windows XP installation into Windows 7 with Paragon Go Virtual
By greg shultz
My first computer was a Kaypro 16 \"luggable\" running MS-DOS 2.11 which I obtained while studying computer science in 1986. After two years, I discovered that I had a knack for writing documentation and shifted my focus over to technical writing.