Navigate Windows 8 like a pro with the Windows Key

We all know that Microsoft Windows 8, with its Metro user interface, is primarily designed for use on a touch-screen tablet. However, Microsoft has said that they also had the mouse and keyboard user in mind when they reimagined the operating system. While using Windows 8 in a touch paradigm will take some getting used to, it will probably be easier than getting used to navigating Windows 8 with a mouse and keyboard — regardless of what the folks at Microsoft say.

As one who has been working with Windows 8 on a desktop system, I can definitely attest to that. Sure there are all kinds of nice features in Windows 8 that are intended to make it easy to use a mouse and keyboard — I don’t deny that — but the problem is that they are essentially in unfamiliar territory.

When I first began working with Microsoft Windows 8, I definitely had déjà vu moments where I felt like I was back in 1987 fumbling around with my first mouse — a boxy Logitech model C7 with serial connector, which I still have in a box somewhere. It was tricky in the beginning, but after playing Reversi in Windows 2.0 for hours on end I finally got the hang of it.

Of course, using a mouse and keyboard in Windows 8 isn’t as nearly as troublesome as back then, but it is still tricky. However, time and perseverance have paid off and I’ve adapted — the nuances associated with Windows 8’s mouse and keyboard tricks are slowly but surely becoming second nature.

Keep up with all the Windows 8 news:

As you know, when you start Windows 8 and log in, the first thing you see is the Metro Interface. You can then launch an app or the Desktop. Once you launch something, the Windows key can be used as a quick task switcher that allows you to quickly move between Metro and whatever you accessed.

Now, if you have more than two things running at the same time, you can, of course, still use the old CoolSwitch feature — [Alt]+[Tab]. If you press [Windows]+[Tab], instead of the Windows Flip 3D, you will now see a thumbnail view of running tasks that is very similar to the Live Taskbar Thumbnail feature in Windows 7, but it is anchored to the left edge of the screen, as shown in Figure A. If you continue pressing [Windows]+[Tab], you will cycle through all the running apps just like in previous versions of Windows. 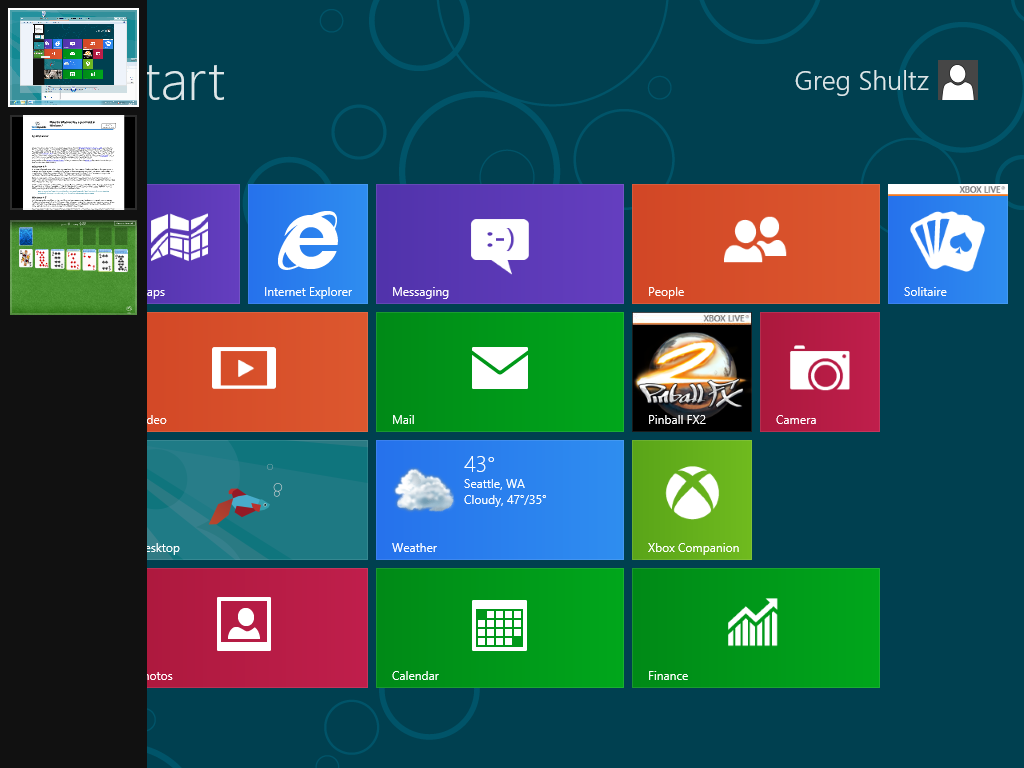 Pressing [Windows]+[Tab] brings up a thumbnail view of running tasks anchored to the left edge of the screen.

Now, here is a trick that I picked up. As you may have discovered, unlike traditional Windows applications, Windows 8 apps do not have a Close button in the upper-right corner. So people wondered how you close an app. Well, if you right-click on an app’s thumbnail, a Close button will appear, as shown in Figure B. Just click the button and the app closes down. 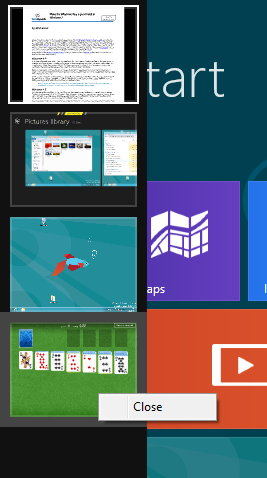 Right-clicking on an app’s thumbnail displays a Close button that you can use to close an app.

Pressing [Windows]+[C] brings up the Charms bar. The Windows 8 Charms are a set of five icons that appear on the right edge of the screen, as shown in Figure C. Via the five icons (titled: Search, Share, Start, Devices, and Settings) you can access a host of controls in Windows 8. On a tablet, the Charms are accessed with a swipe of your thumb. On a desktop, if you press [Windows]+[C] the Charms panel instantly appears. 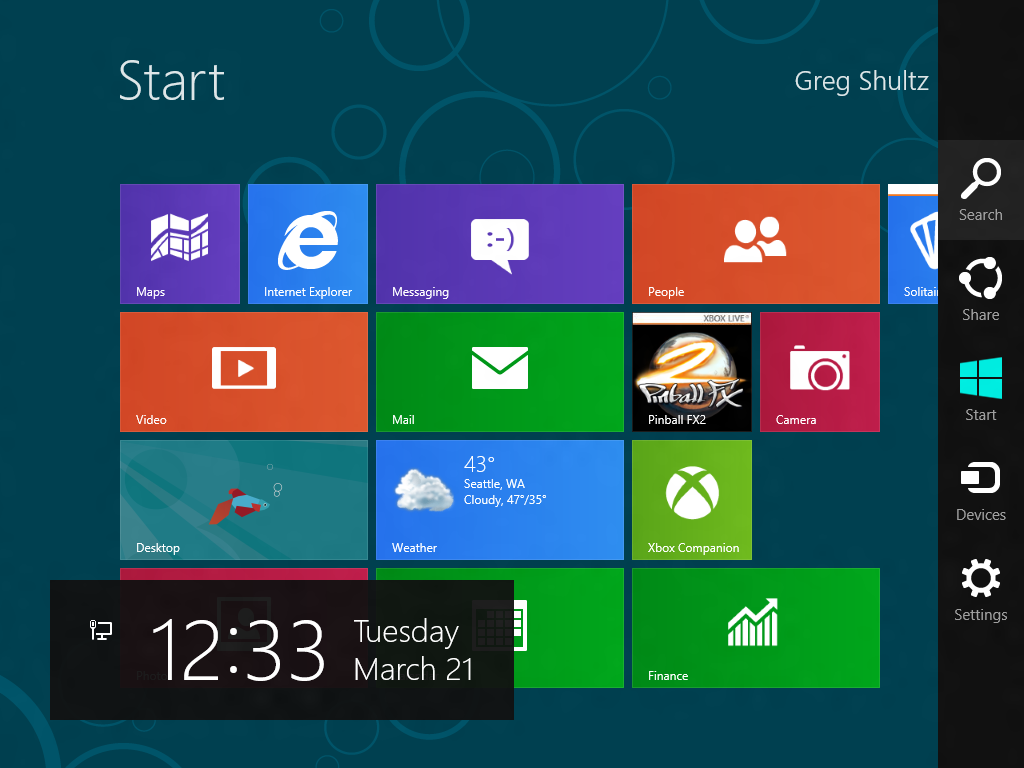 The Charms bar allows you to access a host of controls in Windows 8.

Pressing [Windows]+[I] brings up the Settings bar. The Settings bar (as I am calling it since I am not sure what its official name is) contains a set of standard icons as well as a context list of settings or options that specifically pertain to whatever you currently have on-screen. As you can see in Figure D, the context section of the Desktop Settings bar provides access to Control Panel, Personalization, PC Info, and Help. At the bottom are the standard icons that appear on every Settings bar: Network, Volume, Brightness, Notifications, Power, and Language. 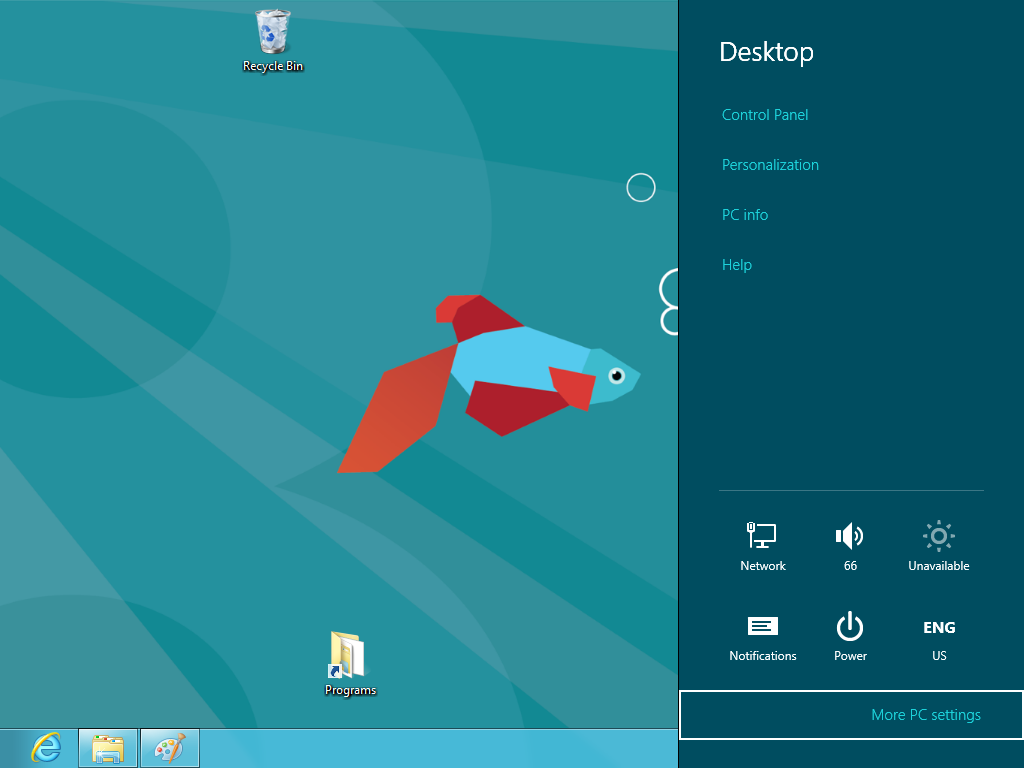 Pressing [Windows]+[Q] brings up the Apps Search feature. If you are looking for the Windows 8 equivalent of the Start menu, then as far as I’m concerned, this is it!

No matter where you are, just press [Windows]+[Q] and you’ll see the Apps Menu/Search tool. Like the Start Search box on the Windows 7 Start menu, you can begin typing the name of the app or application that you want to run and it will appear in the Results list. For example, need Notepad? Just start typing as shown in Figure E. 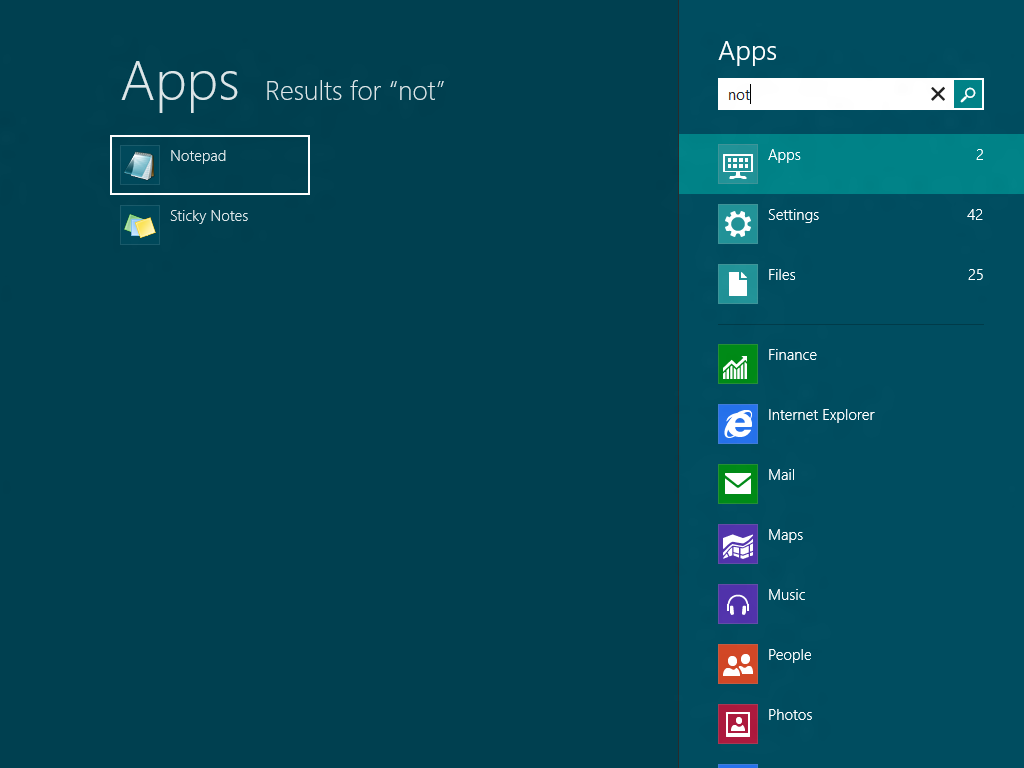 For me, the Apps Search feature is essentially the Windows 8 equivalent of the Start menu.

Pressing [Windows]+[F] brings up the Files Search feature. Simply start typing the name of the file or folder that you want to access and it will appear in the Results list, as shown in Figure F. 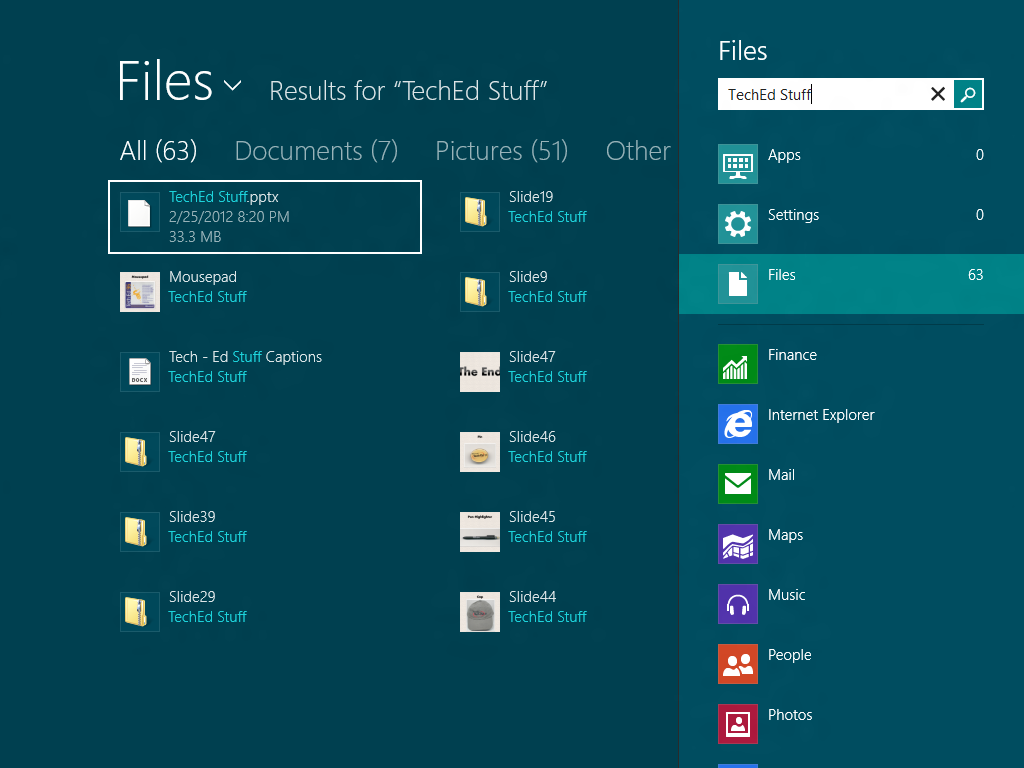 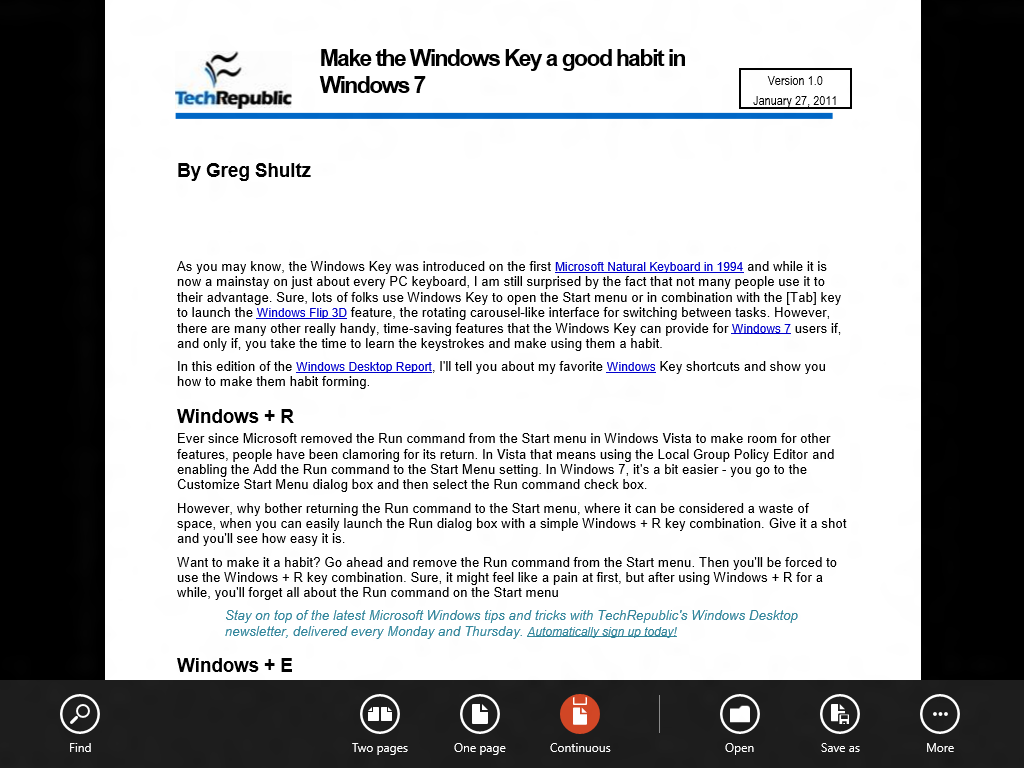 The Apps bar provides access to app-specific features and options.

Pressing [Windows]+[PrtScn] takes a screen shot of the screen. This is a very cool feature to have; in fact I used it to take the majority of the screen shots for this article. When you press [Windows]+[PrtScn], Windows 8 take a picture of the entire screen and then automatically saves the image in the Pictures folder and increments the file name: Screenshot (1), Screenshot (2), etc.

Share: Navigate Windows 8 like a pro with the Windows Key
By greg shultz
My first computer was a Kaypro 16 \"luggable\" running MS-DOS 2.11 which I obtained while studying computer science in 1986. After two years, I discovered that I had a knack for writing documentation and shifted my focus over to technical writing.