Networks vs. Servers: The truce has ended, war is coming

There has long been an unofficial truce between networking vendors and server vendors. However, if you look at the recent actions of HP and Cisco, it’s clear that truce has ended. See why, and how it could benefit IT.

It all began when Mark Hurd took over as CEO at Hewlett-Packard. Hurd, looking for growth opportunities beyond PCs, servers, and printers, kick-started HP’s ProCurve business unit.

ProCurve makes LAN, WAN, and wireless gear for powering networks and has long had a solid product line. However, until Hurd’s arrival in 2005, HP wasn’t aggressively pushing ProCurve, so it was never more than a blip on the radar of the networking market, which Cisco has thoroughly dominated for the past two decades.

Part of that was due to the fact that Hurd’s predecessor, Carly Fiorina, sat on Cisco’s board and developed a deep partnership with HP’s Silicon Valley neighbor. During Fiorina’s tenure, there were even times when HP reps pushed Cisco gear ahead of competitive ProCurve products.

Once Hurd arrived, he quietly put a stop to that, injected resources into ProCurve, and turned into a growth business. Since 2005, ProCurve has consistently been growing faster than the overall networking market and has been nibbling away market share from Cisco.

Now, the gloves are off. Cisco is preparing to launch a full frontal attack on one of HP’s key markets: servers. Although nothing has been officially announced from Cisco, this is one of the worst-kept secrets in the technology business. ZDNet, The New York Times, GigaOm, The Register, Bloomberg, Network World, and lots of other publications have recently written about Cisco’s imminent entrance into the server market. 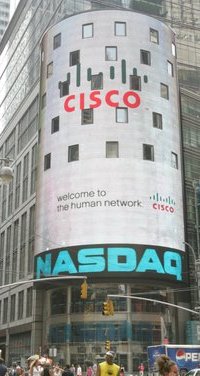 Over the past five years, anyone who has listened to Cisco CEO John Chambers speak or watched the kinds of acquisitions that Cisco has been making – such as Webex, FiveAcross, PostPath, and Jabber – can see that Cisco has ambitions far beyond selling the switches that string together computers on corporate networks and the routers that connect networks and ISPs to the Internet.

At the same time we’ve watched Cisco expand its marketing beyond technology professionals to the mass market with its Human Network campaign, which has been clearly aimed at making the Cisco brand known to average consumers.

So it certainly shouldn’t surprise anyone that Cisco is expanding into an adjacent market – one where it can apply its expertise in hardware and software and use its strong brand recognition among IT professionals to quickly grab market share – at a time when the server market is poised to expand with the growing strength of server-based applications, thin clients, and cloud computing.

That said, Cisco’s move – combined with HP’s unyielding expansion in networking – is likely to set off a chain of events that will not only pit these two as major rivals but also draw server vendors IBM and Dell into the fray. Dell is already toying with lower-end networking products and IBM could easily acquire its way into the networking market, perhaps by buying the networking division of Nortel (which is currently entrenched in bankruptcy).

Cisco has previously had strong partnerships with HP, IBM, and Dell, which led to a tacit truce in which the server vendors stuck to servers and Cisco kept its focus squarely on the network. All bets are off now.

Naturally, Cisco is downplaying the significance of its entrance into servers. Cisco CTO Padmasree Warrior told The New York Times, “We see this not as a new market, but a market transition. Any time there is a major transition occurring, there will be large companies that have to compete in some areas.”

However, Brent Bracelin, an analyst for Pacific Crest Securities, thinks Cisco’s entrance in the server market will be a major development. “This will be the most important and most talked-about product of the year. There will be massive competitive reactions from both IBM and HP, and we expect this will lead to a new wave of industry consolidation.”

The end of the servers-networking truce was inevitable as servers became more utilitarian and networking gear got faster and smarter. Ultimately, the two are powered by similar hardware and software platforms. And since Cisco and Hewlett-Packard are public companies that need to grow every year in order to keep shareholders happy, that means expanding into new markets. So it’s natural that

Nevertheless, if you were to look at Cisco’s move into servers and simply think, “Okay, Cisco wants to jump into a new market so that it can tap another revenue stream,” you’d be missing the forest by staring at the trees. Both Cisco’s ambitions and the forces transforming the data center are much larger than that.

What Cisco will likely announce this spring will be blade servers powered by virtualization. In a rare statement on the subject, Cisco recently told Bloomberg, “Right now, we have virtualized local area networks, virtualized storage and virtualized servers. The challenge is integrating the management of those systems so they all work seamlessly. We think the network is the logical place to solve that challenge.”

So what Cisco is talking about is a common hardware platform with networking, servers, and storage all abstracted into a virtualized layer of software that can work together flawlessly, be managed centrally, and easily failed over to redundant systems or locations for fault tolerance and disaster recovery.

There’s another term for this: Utility computing. It’s the idea that server systems will no longer need to be managed as a set of boxes, but instead as a pool of virtualized resources. These resources can be scaled up or scaled down as needed and will be used mainly by large service providers. Then companies and IT departments can simply buy the capacity that they need from the service providers instead of having to build out for maximum capacity and then allowing a lot of extra capacity to go unused most of the time.

“Our vision is, ‘how do we virtualize the entire data center?'” said Cisco’s Padmasree Warrior. “It is not about a single product. We will have a series of products that enable us to make that transition.”

Like others, Cisco sees the potential to save a lot of money and energy use for lots of companies by implementing utility computing. There’s also the potential to make a lot of money because computing power is moving away from PCs and toward servers. Applications and storage are migrating to “the cloud” (powered by the data center), while low-cost Netbooks and other Intel Atom-powered machines are expected to dominate PC sales in the years ahead. That will make PC profit margins razor thin while driving up the demand for high-powered servers (with much better profit margins).

Cisco knows that utility computing represents a huge market opportunity and believes that it has the expertise to be a leader in that market. Plus, it doesn’t want to relegated to doing just the network plumbing to connect systems within data centers and across the Internet. But HP, IBM, and Dell have their eyes on the same data center prize. They all know that utility computing will power both the Web-based apps of cloud computing and tomorrow’s adaptive enterprise data center. That’s why we should fully expect to see a battle royal among the big four starting this year.

Delivered Weekdays
Sign up today
Share: Networks vs. Servers: The truce has ended, war is coming
By Jason Hiner
Jason Hiner is Editorial Director of CNET and former Editor in Chief of TechRepublic. He's co-author of the book, Follow the Geeks.