No phone needed: Make calls from Gmail or Hangouts

If you use Gmail or Google+ Hangouts, you can call any U.S. or Canadian phone number for free. Andy Wolber shows you how.

There are lots of ways to connect with people these days: Skype, Google+ Hangouts, or Facetime. But the single most reliable method of having a real-time voice conversation continues to be a phone call.

The tools used to make phone calls in the United States changed over the past forty years. In the 1970s, nearly all calls required an AT&T handset. By the 1990s, you could purchase a variety of brands of bulky “wireless” handsets that had roughly the range of early WiFi access points. In the early 2000s, early adopters began to go “cellphone only”, dropping landlines and switching to VOIP (voice over Internet protocol) providers. By 2007, Americans spent more on cellphone plans than “plain old telephone” services.

Our reasons for not placing a call have changed, as well. Today, we deal with cell phone excuses, such as “my battery died” or “my cell signal is really weak at this hotel.” Or the increasingly rare “I’m over the limit on my minutes this month.” Luckily it’s 2012: you can place the call from your computer.

If you use Gmail or Google+ Hangouts, you can call any U.S. or Canadian phone number for free. You need a computer, Internet access, a microphone, and speakers. Depending on your system and setup, you may need to install a plugin found at http://www.google.com/chat/voice/. (Calling to other countries is available, but incurs costs.)

1. Click the “Call Phone” icon in the Chat window displayed in Gmail.

Call a phone from Gmail chat 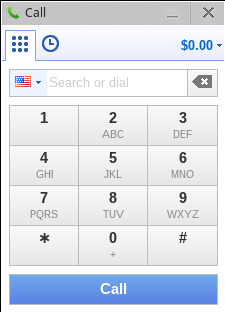 The barrier is getting users to make that very first call. I’ve found that after people make their first call from Gmail, they’ll make another. To get people to use the feature, have folks place a call to a regular phone line during a training session. (Typically, I have people call my cellphone as a demonstration.)

You can also include a phone-only user in a Google+ Hangout. Start your Hangout as usual, and add your Google+ participants. To add the phone-only user, click the “+telephone” option, and then enter their phone number. When you click “Hangout” they’ll receive a phone call and will join the Hangout with an audio-only connection. Google+ obscures portions of their phone number, which is especially useful if you’re doing a Hangout on Air.

Include a ‘phone-only’ user in a Google+ Hangout

If you’ll be making a lot of phone calls from your computer, I suggest a headset. I recommend behind–the–ears models, which look slightly less nerdy than traditional above-the-head models. I prefer headsets that can plug in either with the two separate audio and microphone connections or with a single USB port. These types of headsets tend to work with a wide range of computer systems. Chromebook users can simply use a smartphone headset.

Gmail and Google Voice calling can be quite handy in a pinch. One nonprofit organization I worked with ran out of extensions on their conventional phone system. They simply couldn’t afford the several thousand dollars necessary to upgrade. Instead, they configured a couple of Google Voice lines for carefully selected staff members. Those staff members used their computers and headsets to make and receive calls. No old-fashioned phone lines needed.

Share: No phone needed: Make calls from Gmail or Hangouts
By Andy Wolber
Andy Wolber helps people understand and leverage technology for social impact. He resides in Albuquerque, NM with his wife, Liz, and daughter, Katie.