Peter Cochrane’s Blog: Dumb networks are about to get smarter

Clever devices will be at the heart of fully intelligent networks...

Written in my garden on the first warm day of summer and dispatched to silicon.com via an extended-range wi-fi link.

As peripherals have become smarter, our networks have looked progressively dumber. In some cases, could peripherals ultimately become the core of the network?

Mesh networks have been around for many years in both fixed and mobile formats, with static and dynamic path allocation, partial trunking, and full node hopping. They have been used in civil and military arenas with hybrid fixed-mobile versions flying under the mobile ad-hoc network, or Manet, banner.

In many publications, schematics show planar 2D MeshNets of static and evenly spaced nodes, but the reality is that 3D and uneven spacing is the norm with nodes of different types and configurations.

To make things even more complex, many of the nodes can be on the move. This factor increases the operational ad hoc connectivity, with node switching and sporadic link loss likely.

Multilayer mobile MeshNet
The protocols involved span the ultra-simple to the incredibly complex, while the mode of traffic routing and distribution varies from the single to the multiple path that might be best visualised as a ‘sneeze’.

In the extreme, a message can be transmitted to all adjacent nodes and then propagated like some virus in a biological system. In other words, it can progress in every direction away from the source node and thereby flood the entire network, like pictured below.

Uncontrolled message propagation – viral mechanism
Does progress end at this point? Unlikely. Technology always puts before us new and interesting options that allow novel possibilities. Consider mobile devices in general for example; 2.5 and 3G, wi-fi and Bluetooth are now common to most mobile devices, and soon we may see 4G, WiMax and LTE?

These connection options allow multi-mode networking with long, short and close proximity hops. But there is now an added component – GPS. We actually know where devices are and whether they are moving and in which general direction.

This approach adds another degree of freedom in the decision-making process, especially for all data-transmission modes. It also changes the nature of network flooding and for a mass migration of people and mobile devices it might be best visualised as a sneeze in the wind. 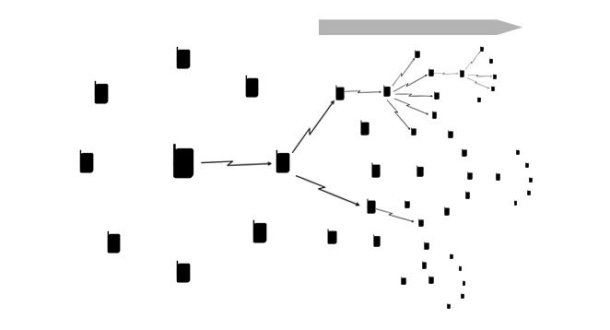 Only static and mobile nodes in the general direction of the target accept the message being transmitted
Does it end here? I think not. Many devices now have diary information onboard and know where they have been and where they are going. They also hold a record of habitual activities that paint a very interesting map. All this information could be used to predict network node positions and overall capacity in real-time.

Interestingly, this type of network requires very little, if any, global control or management today. Tomorrow, they may well require even less and may represent the manifestation of a fully intelligent network.

The inclusion of a variety of sensors in mobile devices will make this development even more likely as we shall then have location, direction, activity, condition, history, habitual and future information.

We shall also have a communication and association history for each device with an obvious option to share all this in a new social-networking mode of devices. And then, of course, there is the interaction with and influence on the fixed infrastructure.

Delivered Weekdays
Sign up today
Share: Peter Cochrane’s Blog: Dumb networks are about to get smarter
By petercochrane
Peter Cochrane is an engineer, scientist, entrepreneur, futurist and consultant. He is the former CTO and head of research at BT, with a career in telecoms and IT spanning more than 40 years.