With Windows 8 you can restore individual files from a System Image backup quite easily using its built-in ability to mount ISO and VHD files.

A VHD is a virtual hard disk that is most notably used with a virtual PC programs like Windows 8’s Client Hyper-V. You probably also know that one of the new features in Windows 8 is the ability to natively work with VHD and ISO files. More specifically, this means that you can mount VHD and ISO files simply by double clicking on them in File Explorer. When you do, the operating system creates a virtual drive from the file, assigns a drive letter, and makes the drive available in Computer.

Now, what you may not know is that a VHD is at the heart of a System Image of your hard disk. In other words, when you create a System Image, like I described in the Creating a System Image section of the article Restore Windows 8 with System Image Recovery, the operating system actually creates a VHD file and stores the contents of the hard disk in it.

Because a System Image on a set of DVD discs contains a VHD file that is broken up into pieces, the native VHD support is unable to mount the VHD because by itself, Windows 8 is unable to put the pieces together. However, because a System Image on an external hard disk or on a network drive is a single VHD file, you can mount it and easily access the files that it contains.

This means that in Windows 8, you can restore individual files from a System Image quite easily. Let’s take a closer look.

The very first time that you access a VHD in a system image, you’ll need to use Disk Management. From that point forward, the VHD will be recognized by the operating system and you can access it directly from File Explorer.

To begin, press [Windows]+X to bring up the WinX menu and select Disk Management. When the tool launches, pull down the Action menu and select the Attach VHD command. When you see the Attach Virtual Hard Disk dialog box, click Browse, and then use the Browse dialog box to locate the VHD file. As you can see in Figure A, the VHD, or more specifically VHDX, file on my external hard disk is located in F:\WindowsImageBackup\Oberon\Backup 2013-06-14010701 folder. 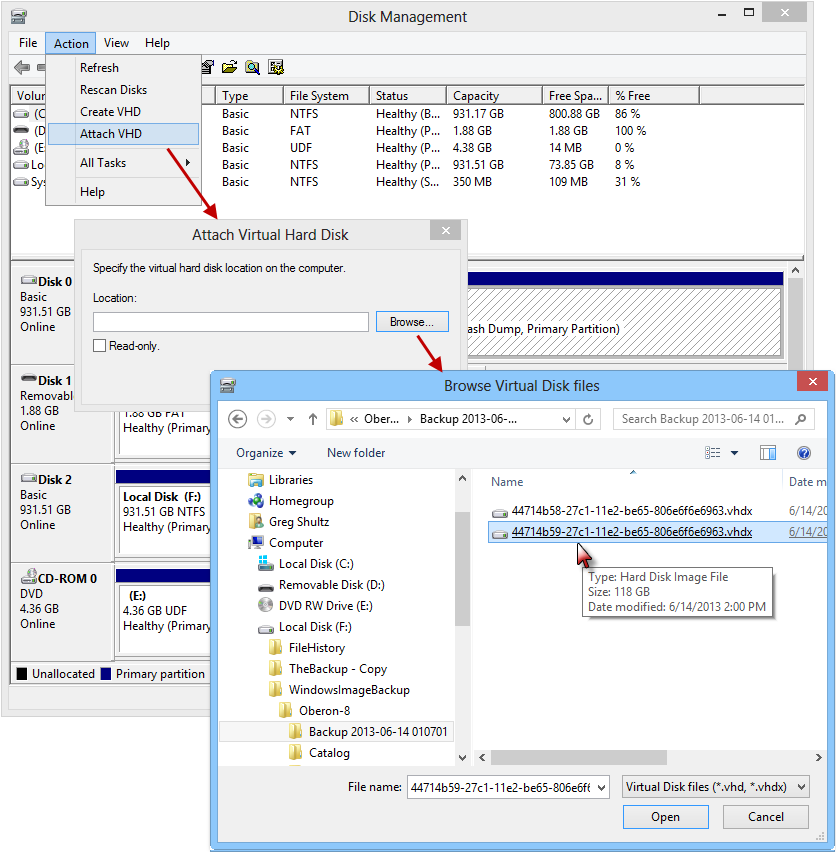 The first time that you access a VHD in a system image, you’ll need to use Disk Management.

There are actually two VHD files and you’ll want to use the largest one. In my example, the largest VHD file is 118GB.

When you double click on the VHD file, it will appear in Disk Management with a blue icon but it will not be assigned a drive letter, as shown in Figure B. 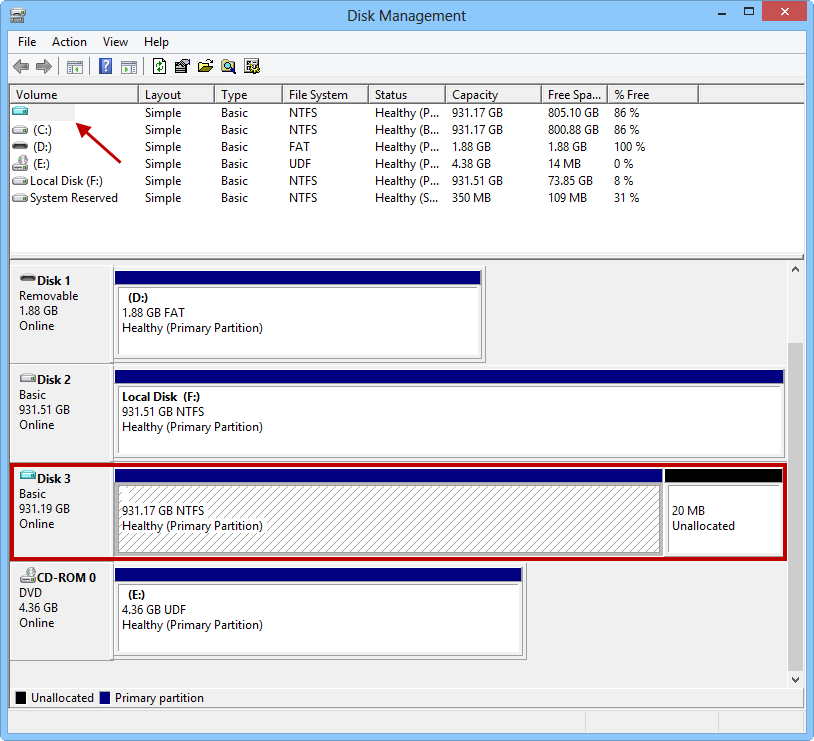 When you attach a VHD from your System Image it will appear in Disk Management with a blue icon but it will not be assigned a drive letter.

Once Disk Management has attached the VHD, you can assign it a drive letter. Right click inside the disk box, select the Change Drive Letter and Paths command, and click the Add button. When you see the Add Drive Letter or Path dialog box, the next available drive letter should be ready to go, so just click OK. This process is illustrated in Figure C. 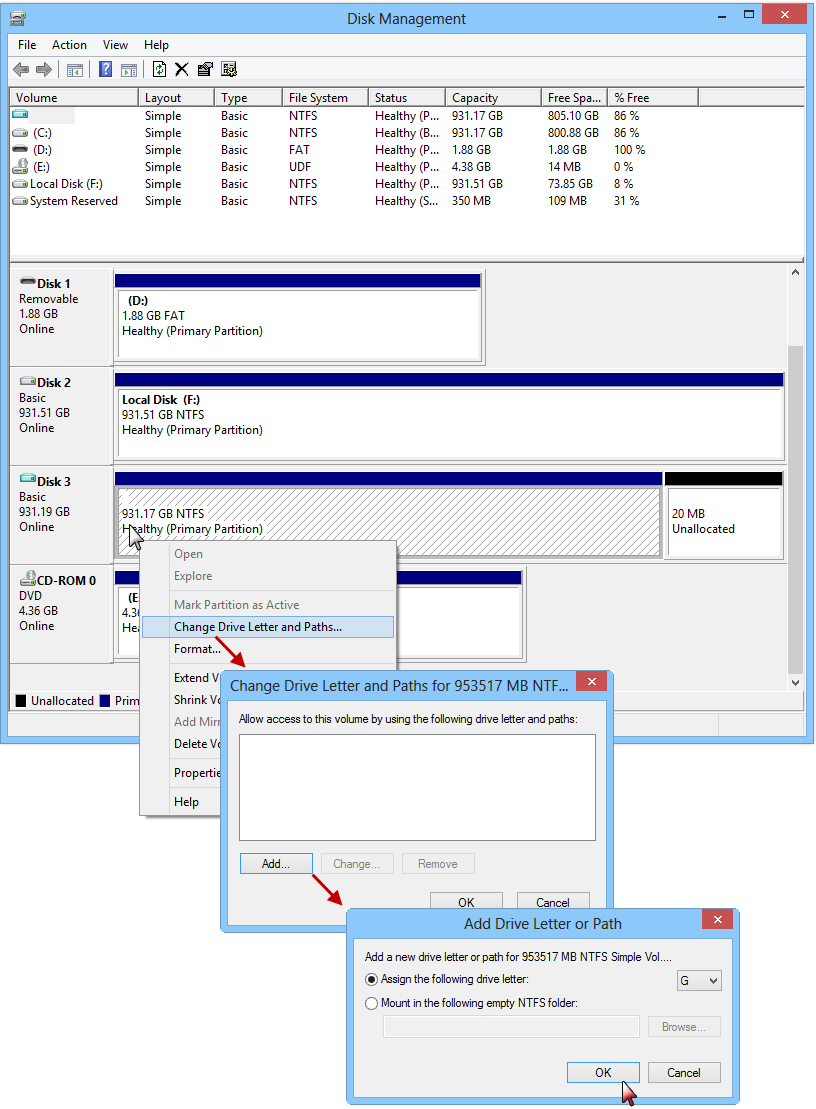 To be able to access the VHD, you’ll need to assign it a drive letter.

Now that you have assigned a drive letter to the VHD, you can open Computer and access and restore any of the files in your System Image backup, as shown in Figure D. 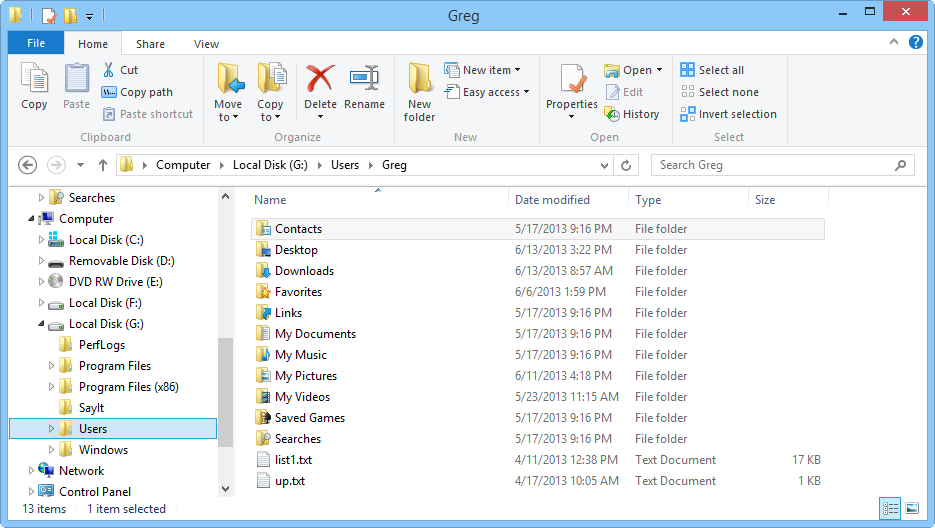 Once a drive letter has been assigned, you can easily access any of the files stored in your System Image backup.

When you are finished with the VHD, just right click on the drive letter and select the Eject command. If you want to access it again later, you can do so right from within File Explorer – just locate and double-click the VHD file and it will immediately be assigned a drive letter.

Share: Quick Tip: Restore individual files from a System Image in Windows 8
By greg shultz
My first computer was a Kaypro 16 \"luggable\" running MS-DOS 2.11 which I obtained while studying computer science in 1986. After two years, I discovered that I had a knack for writing documentation and shifted my focus over to technical writing.