Remove Windows 8 from a dual-boot configuration

Greg Shultz shows you how to remove Windows 8 from a dual-boot configuration.

At some point in time before October 26, 2012, you’ll need to stop using the Windows 8 Release Preview as it will stop working. Not exactly sure what will happen, but if it is like most of Microsoft’s free evaluations, one or all of the following will occur: the desktop background will turn black and you will see a notification indicating that the system is not genuine, or the PC will automatically shut down every hour without allowing you to save any work in progress. As such, you’re going to want to remove Windows 8 Release Preview from your system.

Removing Windows 8 from a dual-boot configuration should be a relatively straightforward operation; however, just to be on the safe side, I strongly recommend that you back up your data files before you proceed. If you followed my instructions in the earlier dual-boot articles, you should already a complete image of your hard disk via the System Image tool. Even so, having a current backup of any data files will ensure that nothing will be lost if anything out of the ordinary were to occur as you follow the steps for removing Windows 8 from a dual-boot configuration.

Removing Windows 8 from the boot loader

You’ll remove Windows 8 from the boot loader from within Windows 7. So the first thing you will do is boot into Windows 7.

When you set up a dual-boot configuration by installing Windows 8 into an existing Windows 7 configuration, the installation procedure creates the boot menu by adding entries to the Boot Configuration Data database. Now, as the computer boots up, the Windows Boot Manager loads first and reads the Boot Configuration Data and uses the information it finds in the database to display the boot menu. When a selection is made, the Windows Boot Manager retrieves information about how to boot that operating system and then passes the information over to the appropriate Windows operating system loader or Windows resume loader, as the case may be.

You need to launch BCDEdit.exe from a Command Prompt with Administrator privileges. To do so, click the Start button and type cmd in the Start search box. When you see CMD appear the results pane, right click on it and select the Run as Administrator command. When you do, you will encounter a UAC and will have to work through it. Once the Administrator Command Prompt appears, just type bcdedit and press [Enter]. You’ll then see the commands that make up the boot menu in the Boot Configuration Data database.

In Figure A, you’ll see the boot menu for a Windows 8 VHD. As you can see, the instructions in the Windows 8 section of the menu specify the Windows8RP VHD file as the device to boot from. 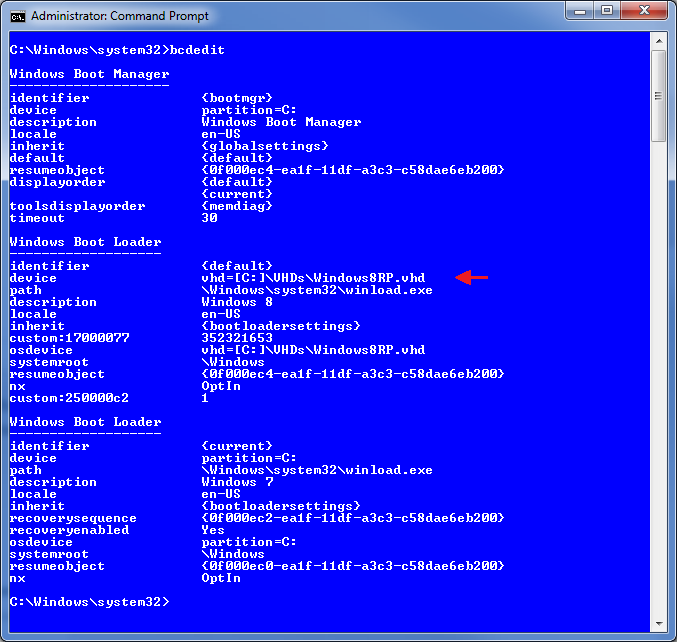 This is a boot menu for dual-booting Windows 8 from a VHD.

In Figure B, you see the boot menu for a Windows 8 partition. As you can see, the instructions in the Windows 8 section of the menu specify the F: partition as the device to boot from. 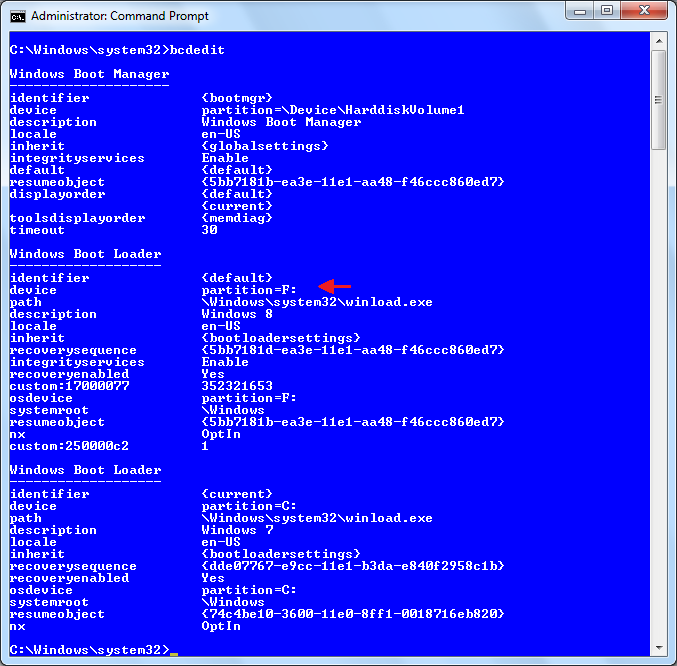 This is a boot menu for dual-booting Windows 8 from a partition.

At this point, go ahead and close Administrator Command Prompt window. 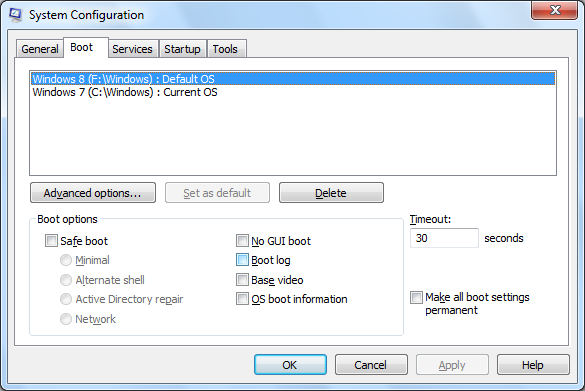 You can easily remove Windows 8 from the boot loader using the System Configuration tool. 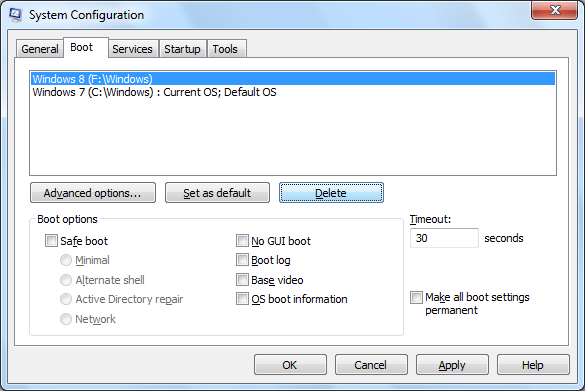 Once you select the Windows 8 entry, just click the Delete button.

As soon as you do, the Windows 8 entry will be removed. When you click OK, you’ll be prompted to restart your computer, as shown in Figure E. Just click the Restart button.

You’ll be prompted to restart your computer after deleting the Windows 8 entry.

When your system restarts, it will boot right into Windows 7 – you will not see a menu. If you wish, you can re-open the Administrator Command Prompt, type bcdedit, press [Enter], and you’ll see that the commands for Windows 8 are no longer on the Boot Configuration Data database’s boot menu, as shown in Figure F. 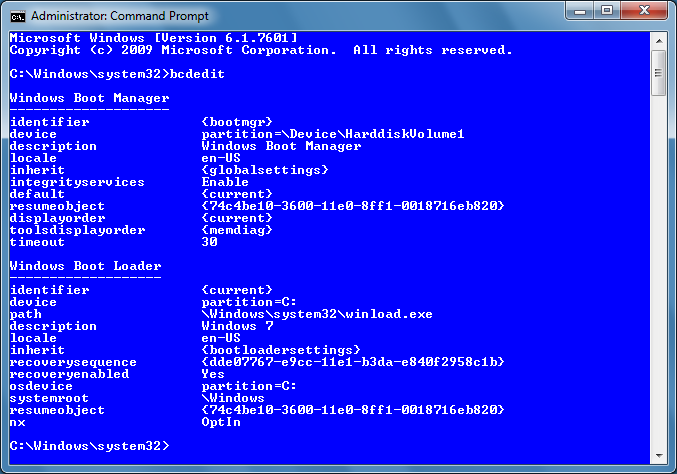 The Windows 8 section will not appear on the Boot Configuration Data database’s boot menu. 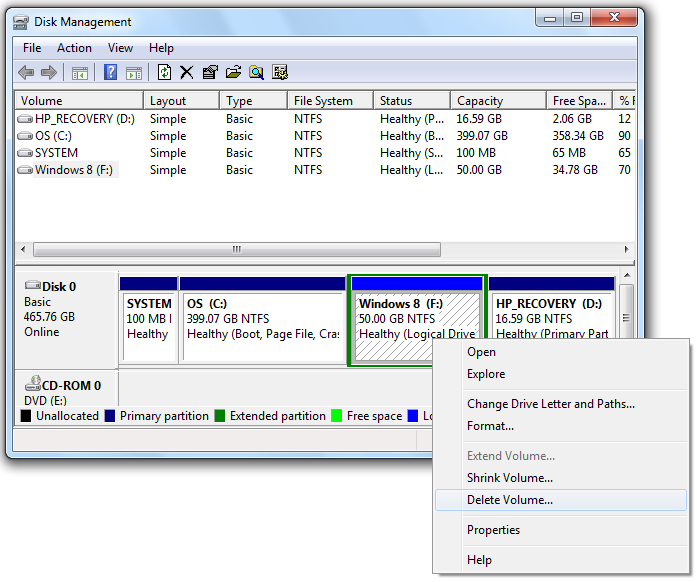 Right click on the Windows 8 partition and select the Delete Volume command.

When you do, Disk Management will prompt you twice to confirm the Delete Volume operation, as shown in Figure H. At this point, you’ll see that the area is now marked as Free space. If at a later date you want to install the real version of Windows 8, you can leave the space as it is. 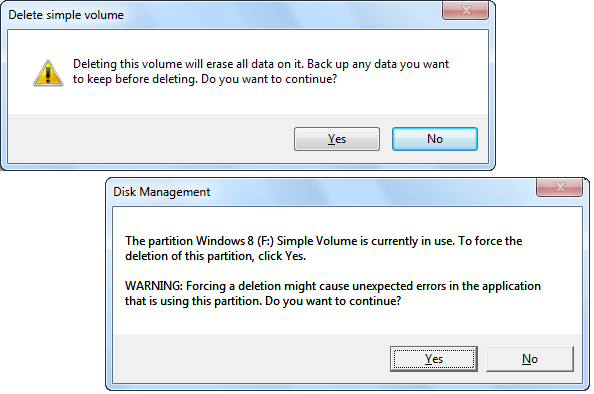 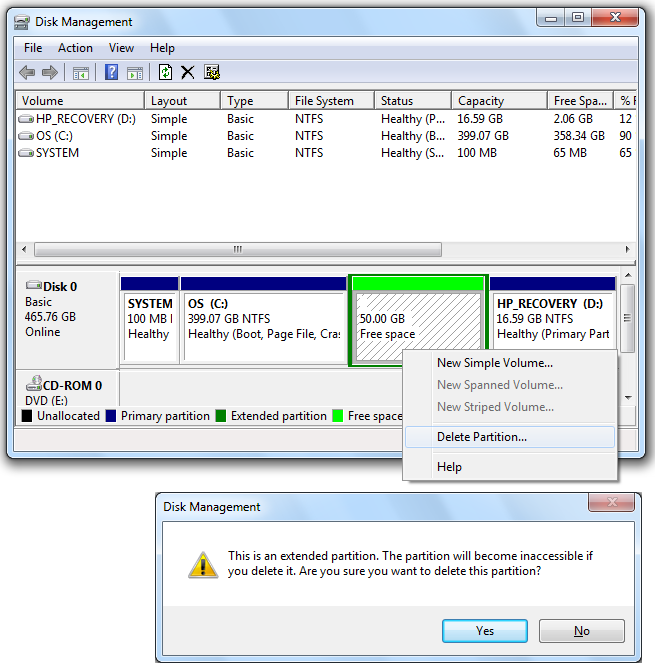 If you want to regain the space, right-click on the Free space and select the Delete Partition command. 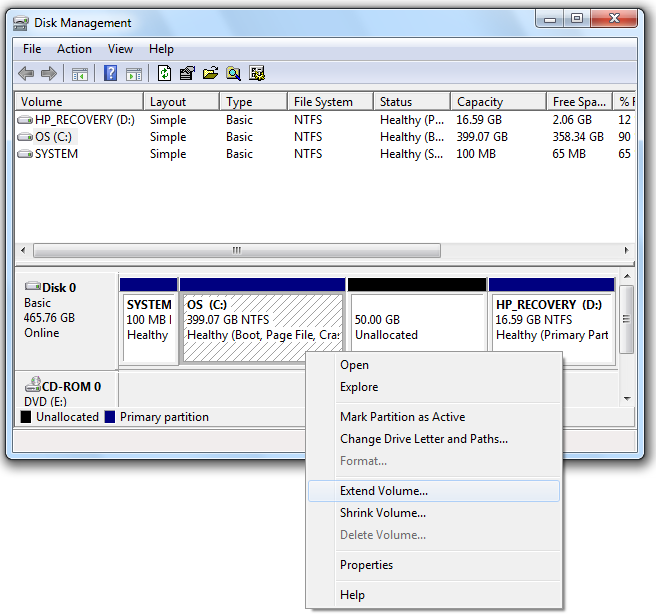 The Extend Volume Wizard consists of three screens, which are shown in Figure K. The second screen will be filled in for you and in most cases you will just go with the default settings. 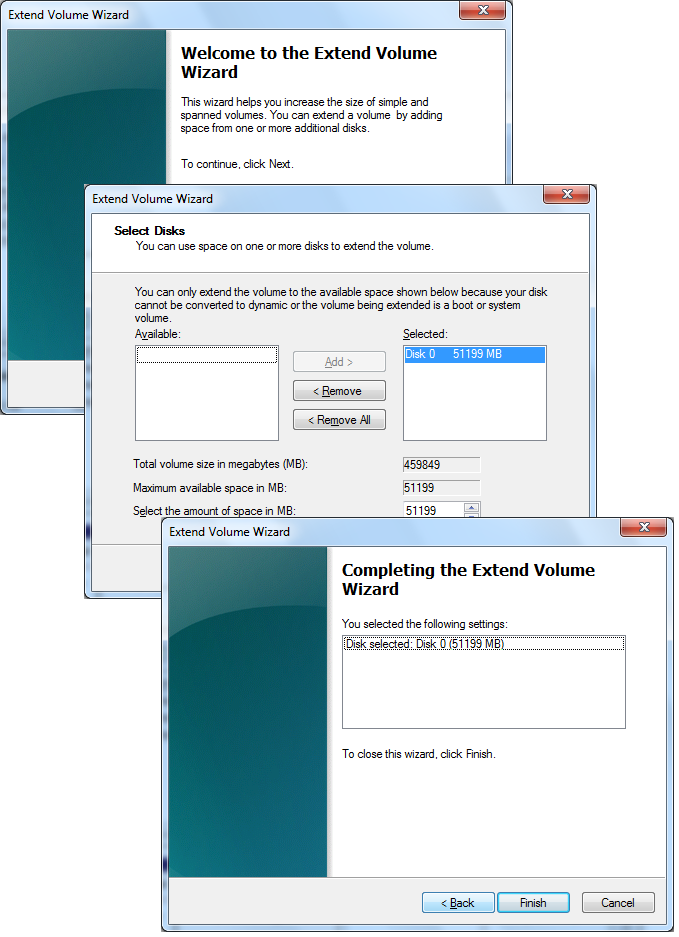 The Extend Volume Wizard consists of three screens and in most cases you will just go with the default settings.

Once the volume has been extended, you’ll see that all of the free space has been reallocated to your primary hard disk, as shown in Figure L. 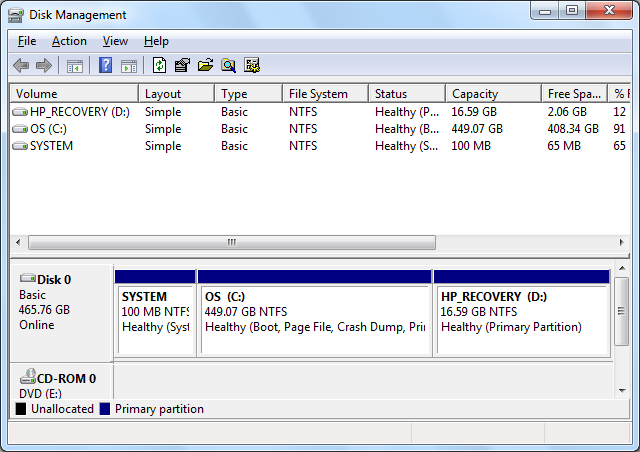 You should be right back where you started.

If you installed Windows 8 to a bootable VHD in either Windows 7 Ultimate or Windows 7 Enterprise, all you have to do is locate the VHD file and delete it as shown in Figure M.

You can just delete the VHD file.

Have you set up a Windows 7/Windows 8 dual boot system? Will you now remove it? As always, if you have comments or information to share about this topic, please take a moment to drop by the TechRepublic Community Forums and let us hear from you.

Delivered Weekdays
Sign up today
Share: Remove Windows 8 from a dual-boot configuration
By greg shultz
My first computer was a Kaypro 16 \"luggable\" running MS-DOS 2.11 which I obtained while studying computer science in 1986. After two years, I discovered that I had a knack for writing documentation and shifted my focus over to technical writing.