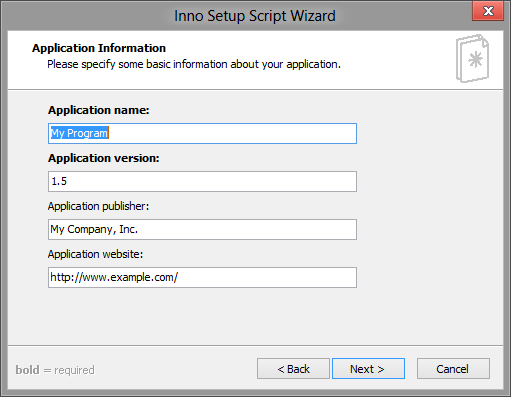 Suppose you wrote a really awesome application that you want to sell on the web, or perhaps you are an IT administrator that wants to push a set of packages out internally and need a neat way to deliver everything in a nice, custom-made installer app. In either of these scenarios, a simple ZIP file might not do your software justice for the end user, especially if additional work such as setting up registry keys and Start Menu items are in order.

For a better part of the past two decades, InstallShield has been one of the big players in the Windows application installer space, and for good reason. It offers the end user a nice MSI package that can install software without requiring any serious technical knowledge. However, InstallShield is very expensive to license and really isn’t suited well to small-time software developers with limited budgets.

For those looking for a suitable alternative that gets the job done, Inno Setup by Jordan Russell Software is a freeware product which gives you the ability to create EXE installer programs for redistribution on physical media or on the web. Inno Setup offers an easy to understand scripting system for building installers from scratch.

Of course, a script wizard is offered as well, to help flesh out the majority of an installer script using a short series of step-by-step prompts. During my tests, I was able to generate a script for an example app from start to finish in just under a minute. Once the script is done to your liking, you can then tell Inno Setup to compile to EXE, which creates a setup file ready to deliver to the customer in mere moments.

Just to keep everyone on their toes, Jordan Russell didn’t want to stop at the basics with his installer toolkit. You can also compile out to 64-bit targets, modify the installer icon with any ICO files, compress the package down with LZMA2 compression (the same compression technology used by 7-zip), manage digital signatures for installers, and even include password protection, just to name a few.

In comparing this software to something of higher caliber, such as InstallShield or Wise, you won’t get super advanced bells and whistles such as cloud deployments or Windows Installer platform support. But honestly, unless you have a dedicated purpose that requires such things, Inno Setup covers all the basic requirements quite nicely.

Of all the free programs in this category, Inno Setup stands out as professional looking and super easy to use.

To say that installer applications in the lower end of the spectrum have come a long way since the dog days of software like the Package & Deployment Wizard from Visual Studio 6 is an absolute understatement. In fact, the functionality and look and feel provided by a free installer creator app such as Inno Setup is close enough to paid professional kits that many developers, and end users alike, won’t be able to really notice or care about the differences. If you write or re-bundle software and need a proper delivery system, give Inno Setup a try. I highly recommend it.

Delivered Weekdays
Sign up today
Share: Review: Inno Setup – app installer made easy
By matthewnawrocki
An avid technology writer and an IT guru, Matthew is here to help bring the best in software, hardware and the web to the collective consciousness of TechRepublic's readership. In addition to writing for TechRepublic, Matthew currently works as a Customer Success Professional for Ultimate Software in Santa Ana, California.