LEGO Harry Potter Hogwarts building set and board game teaches logic, problem solving, and engineering skills. Find out whether Donovan Colbert thinks the gameplay makes it worth the price.

Last Christmas I bought a D&D board game, The Legend of Driztt, as a project to see if I could introduce my 10-year-old to gateway fantasy role-playing (FRP) gaming. The game ended up to be far more popular with my college-aged drinking buddies than with my daughter. Undaunted, I decided to try again, going for lighter fare with the LEGO Harry Potter Hogwarts game. Not only was it a hit with my daughter, I think the gameplay is better than The Legend of Driztt. 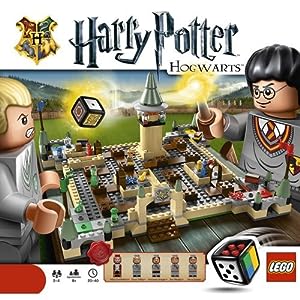 If you’re not familiar with LEGO games, the basic idea consists of a LEGO kit that can be built into a game-board. Once you’ve built the board and assembled the game pieces, the documentation contains a set of rules to play an interactive game. This kit is typical in terms of LEGO quality and cost.

My daughter was very excited when I gave her the gift. She insisted on building it herself. The kit is between a basic and intermediate set. We bought her LEGO kits when she was younger, but she never showed a lot of interest in the engineering portion of building the kits. She was always more focused on playing with the finished product. In this case, she was enthusiastic about attempting to build the kit herself. Despite her inexperience she did pretty well, only needing help on a few of the more complex steps. The value of getting my daughter interested in reading the instructions and building the playset herself was a big deal to me. LEGO is struggling to get girls interested in their toys, but she jumped right into this project.

Because the kit is designed to play as a game and not a free-play toy, it isn’t as intricate or as literal as the Hogwarts Castle playset. Authentic representation takes a backseat to game mechanics, so it requires a little more imagination to envision the finished game-board as Hogwarts.

After my daughter completed the build, I read the play instructions, and the gameplay didn’t seem interesting or well-thought-out. Several game scenarios are included. The main rules involve a quest to visit four classrooms, gather homework assignments, and be the first to return to your character’s “common-room.” Each of up to four players selects a color-coded character that matches their common-room house. Players race around the board trying to collect all of their assignments and return to their common-room tower first. The other games are loose outlines that are incomplete and recommend that players develop their own rules around those suggestions.

Between a lack of excitement over the game rules and the lack of authenticity of the game board, once the set was completed, there wasn’t a lot of interest in playing the game, so the kit got stored away. Several months later, my daughter was grounded from electronic entertainment. In bored desperation she suggested a “family game night.” Being indulgent parents, after looking through the options, we decided to give Harry Potter a shot.

We read the rules and were initially a little confused, but I thought I had an idea what LEGO was going after. The finished board is a square with towers representing the common-rooms in each corner. Inside the perimeter is a 4×4 grid of LEGO tiles, some of which represent “hallways and stairs” and others that represent  four classrooms that hold assignments. Each character moves one tile per turn. What makes things interesting is that there are die rolls that shift and rotate tiles. This represents the constantly shifting staircases in Hogwarts, and adds an interesting dynamic of strategy and complexity to the game. Another tile on the die allows users to move one adjacent square in any direction, regardless of if the path is blocked because of a shifted or rotated tile. This adds an element of trying to thwart the progress of other players, while making your path the quickest to each assignment. Players find themselves trapped in rooms with no exit and on stairs that lead nowhere, their destination suddenly unreachable.

Although not perfect, the game mechanic works very well, and my daughter, wife, and I really enjoyed the game. It is a difficult task to find a game that a husband, wife, and daughter can all agree on, and rarer still one that encourages building, problem solving, and logic skills from start to finish. The LEGO Harry Potter Hogwarts game kit is a winner on all levels in this regard.

Share: Review: LEGO Harry Potter Hogwarts game
By dcolbertmatrixmso
I spent several years with MCI SGUS/VANSIS in the early 90s providing support for early ebusiness dialup applications including CampusMCI, California Smog Check II Vehicle Information Database, California Firearms Information Systems and others. \ \ In 1997 I moved to Fulltime Systems, makers of Octopus, CoStandBy Server and Fulltime Cluster (Legato Cluster) and Data Replication. \ \ In 2001 I joined Intel's Supplier Integration Systems group, part of the global eBuisness team tasked with making Intel a 100% eBiz company by 2003. \ \ I currently work for a medium sized organization hosting Electronic Medical Practice applications. \ \ I am experienced with Win32, Linux and Unix platforms - with an emphasis on systems design, implementation and support.\ \ You can follow me @dcolbert on Twitter. My personal blog, which often deals with non-technology and controversial subjects is at http://piddlyd.blogspot.com/