MacDrive is an HFS+ installable file system for Windows XP, Vista, and 7, allowing you to take full advantage of Windows Explorer on an Apple Mac.

Ever since Apple’s switch to the Intel x86/x64 architecture for their Mac computers, using Windows on the machines went from slow and cumbersome to quick and easy. All it takes to create a useful dual-boot setup is to use Boot Camp to set up your disk partitions and then allow the tool to install Windows. This comes in handy should you ever need to run Windows software while wringing out every last drop of performance, usually not possible in a virtual machine setting. Now, although OS X can access NTFS-formatted partitions just fine, HFS+ access through Windows is another story entirely. 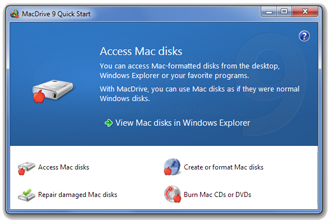 A company called Mediafour aims to fill the gap with an interesting software utility of their own called MacDrive, an HFS+ installable file system for Windows XP, Vista, and 7. Unlike TransMac, a utility I reviewed for the Windows Blog back in March, MacDrive is designed to take full advantage of Windows Explorer by integrating HFS+ support transparently as if it were a file system natively recognized by Windows.

Partitions and disks, whether they are internal or external, are given drive letters at mount for easy access. No fussing around with an application. Just install MacDrive and you are pretty much good to go. For those who need more advanced capabilities, such as Apple RAID or secure delete features, MacDrive is offered in a Pro version for a $20 dollar premium over MacDrive Standard’s $49.99 price tag.

Unfortunately, Mediafour’s versioning scheme for their MacDrive product is a bit limiting, at best, when it comes to compatibility with newer releases of Windows. For instance, when MacDrive 7 was released back in 2007, it was designed to be supported on Windows Vista, but not Windows 7. Even though Windows Vista and 7 were virtually identical under the hood from a driver’s perspective, Mediafour insisted that everyone had to pony up for an upgrade license for the next version release, which cost about $20 or $30 dollars, depending on the edition procured initially. Of course, despite this slight nuisance, Mediafour has to continue supporting their developers somehow, and this is how they make that work for them.

Aside from the somewhat high price, MacDrive truly is worth checking out, especially if you dual-boot Windows 7 alongside OS X on your Mac. However, if the thought of having to pay for major version upgrades is getting you down, you can just as easily save money and go for a small exFAT storage partition, whereby data saved into this area will be accessible (with full read/write capability) in both Windows and OS X. Still, such a possible solution pales in comparison to actually tapping into HFS+ directly on Windows. For those still stuck on the fence and for the faint of heart, Mediafour offers their product with a free 5-day trial version ready to download at their website.

Delivered Weekdays
Sign up today
Share: Review: MacDrive for Windows
By matthewnawrocki
An avid technology writer and an IT guru, Matthew is here to help bring the best in software, hardware and the web to the collective consciousness of TechRepublic's readership. In addition to writing for TechRepublic, Matthew currently works as a Customer Success Professional for Ultimate Software in Santa Ana, California.