Due to scheduled maintenance, the ability to log in to your account and make purchases will be disabled December 1 - 2.

PuTTY is a free, open source terminal application that is highly configurable. In addition to the basic chores of serial terminal communications, telnet, SSH, rlogin, and so on, it is also able to perform secure file transfers via SFTP and SCP. It is also able to act as an SSH tunnel for X11 traffic. 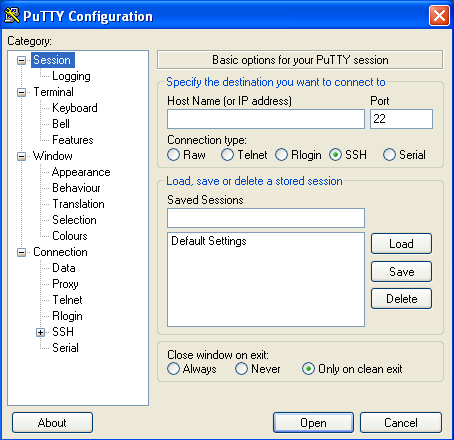 System administrators, developers, network engineers, and other IT pros that need to connect to remote systems will find PuTTY useful.

PuTTY fills the gap that was left when Microsoft Windows stopped shipping with HyperTerminal. In addition, its extreme configurability, combined with the ability to save connections, makes it a far more usable option than what Windows ships with (currently, a plain command line telnet client which is not installed by default). *Nix users will appreciate that it puts a lot of functionality into a single package.

Most system administrators and network engineers, and many developers, have a need to connect to remote systems on a regular basis. Unfortunately, Windows does not ship with the tools to do this, leaving these IT professionals on their own. PuTTY neatly fills this gap.

Primarily users find PuTTY is useful for connecting to routers and switches (via telnet, SSH, and serial connections), and *Nix servers and mainframes, which are quite useful via text-only terminal sessions. For people working with X11 over the public Internet, PuTTY can tunnel their sessions via SSH, protecting sensitive data in transit.

Users with more demanding needs, such as writing macros or support for additional protocols, will want to look elsewhere. PuTTY can make every common type of connection and its feature set is strong enough to meet the needs of most IT professionals, and for the price it can’t be beat.

Have you encountered PuTTY? If so, what do you think? Rate the unit and compare the results to what other TechRepublic members think. Give your own personal review of the PuTTY in the TechRepublic Community Forums or let us know if you think we left anything out in our review above.

Read our field-tested reviews of hardware and software in TechRepublic’s Product Spotlight newsletter, delivered each Thursday. We explain who would use the product and describe what problem the product is designed to solve. Automatically sign up today!

Share: Review: PuTTY terminal application
By justin james
I am an all purpose IT person. If there's a generic job title in IT, I've probably had it, most likely more than once. Programmer, systems administrator, DBA, PC tech/repair, Help Desk, webmaster, web designer, web developer, applications developer, network engineering. Somehow I have managed to get my thumb stuck in each one of those pies!