SiSoftware Sandra 2013 is a single tool that can bring every benchmark and testing routine under the same roof.

Just the other week, a good friend of mine from Illinois decided it was time for an upgrade to his computer. Running on a now pokey Core 2 Duo and 4GB of RAM, my friend decided to upgrade to an Ivy Bridge based system with higher specs and newer hardware. Now with everything put together, he wanted to put his new baby through the paces and really see where it stands in terms of overall performance. Not to mention, he also wanted the ability to create a dump of his system configuration and any logs in the event that he would need to send such information to a tech support representative. Fortunately, he found a friend in a company called SiSoftware.

SiSoftware has a compelling solution that fills the system testing role quite nicely, and has been doing so for some time now. SiSoftware Sandra 2013 is what I call the end-all-be-all of diagnostic and testing tools out there for the Windows platform. There are a plethora of options to choose from, which can give your PC quite the workout, thoroughly testing each component for speed and functionality, such as the CPU, GPU, RAM, and disk drive performance. Sandra’s included “Burn-in” test can be set to run constantly at maximum utilization as a means to stress-test new equipment. 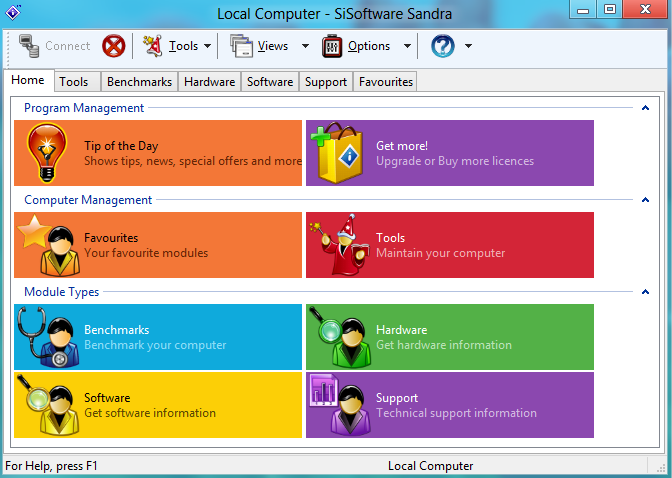 What makes Sandra a fairly compelling package for sysadmins can be attributed to the comprehensive testing of not only your local machine, but on networked PCs via “remote analysis”, which grants you the ability to connect to a PC located on the network and run diagnostics to suit your needs. Sandra even has a wizard that effectively gives you advice on how to boost performance and improve stability where applicable. If you are running a resource-intensive service, such as PostgreSQL or a graphical simulation, Sandra can monitor performance in the background and post results after a specified period of time, which can contain information like system temps, fan speeds, and watts of power consumed.

That’s not all. Sandra is also well versed in software reporting. If you need to send a dump of your system registry to a tech for further examination of a potential or present issue, there’s a feature where with a few clicks of a mouse, the raw data for your registry is exported to a file for further viewing. Likewise, hardware register information can be generated the exact same way if you wanted to look for any hardware conflicts that could be impeding on proper system use.

Now as for the pricing for licensed copies of Sandra, it’s important to note that there are several editions available. They are the Lite, Personal, Business, Tech Support, and Enterprise licenses. The Lite version is the only free version of Sandra available and is made available strictly for home use only. If you are on a corporate network and log into a domain, the Lite version will block itself from running and urges you to consider a purchased copy of Sandra. Paid editions range wildly in price, with the Personal edition starting out at $49.99, then going clear up to $7000 for a 500 seat Enterprise license.

Ultimately, to have a single tool that can bring every benchmark and testing routine under the same roof is something to be cognizant of if you want to stress your PC as well as generate useful reports that can be used for diagnosing issues. Sure, you could use Windows’ built in System Information Tool for a decidedly barebones experience, but you would arguably be missing out on one of the best diagnostic toolkits out there, and you got to give it a try.

Share: Review: SiSoftware Sandra 2013 performance testing suite
By matthewnawrocki
An avid technology writer and an IT guru, Matthew is here to help bring the best in software, hardware and the web to the collective consciousness of TechRepublic's readership. In addition to writing for TechRepublic, Matthew currently works as a Customer Success Professional for Ultimate Software in Santa Ana, California.