Developing a web-based application is never a small undertaking. At the very best it’s a lot of work just to develop the code that does whatever it is your application is supposed to do but before you even get to the point of writing your application’s code, you have to decide what you going to ...

Developing a web-based application is never a small undertaking. At the very best it’s a lot of work just to develop the code that does whatever it is your application is supposed to do but before you even get to the point of writing your application’s code, you have to decide what you going to write it in.

Deciding what framework or even platform to use can be an excruciating decision and can greatly influence how well your final product works and how easy it is to maintain or connect up to other systems should you need to either export your systems capabilities or import services/data from them.

For the last 4 months I have been developing a very interesting web-based business application (which I will announce here as soon as we’re out of our alpha-test) but deciding exactly how to implement our product took many months and a lot of agonizing analysis about what platform and framework to use. In the Open Source universe, just like Linux or *BSD distributions there is an almost incomprehensible list of options to choose from, and the decision what to write your application in must almost always come after what to write your application on.

Did I hear you say”Huh?” I’ll explain…

On top of each of these have been developed hundreds of frameworks, libraries, and the like. For Web Servers these are usually scripting languages like ASP, PHP, Perl, Ruby. For Web Application Servers Java frameworks like Struts, Tapestry, Spring, or Wicket to name a few (there are dozens) all the way down to the HTML/Java fusion that is Java Server Pages (JSP) or even more recursive hybrids like Groovy or Jython on top of Java on top of a Java Web application platform.

The first problem anyone thinking about developing an application has to wrestle with: What’s the development platform? The answer to this question is often dictated by the skills of the people involved: If you are a really hot Perl programmer it’s unlikely that you will randomly decide to leap into a Java framework. If you have a diverse collection of skills, you have more choices, but the hard part is deciding which frameworks or libraries supports most of the capabilities you need, so that you don’t spend lots of time implementing things that could have come for free inside a framework..

After surveying, evaluating, and agonizing well over a hundred frameworks and libraries in Perl, PHP, Python, Ruby, and Java, we chose perhaps the most under-the-radar, yet most powerful web application currently available. It’s called RIFE.

RIFE is a web application framework developed at Uwyn which is a custom software development shop in Belgium, and Open Sourced several years ago. It has been in more or less continuous development since about 2000 (back when there were very few choices in large-scale Java web frameworks).

It is a “Full Stack” framework, and by that I mean that the RIFE framework supports application development at every level of abstraction, from the presentation layer all the way down to the management of the databases that underly the web application. RIFE sits on top of a web application container (like Apache Tomcat or Jetty) and provides all of the application level services needed to start up and run a web application. 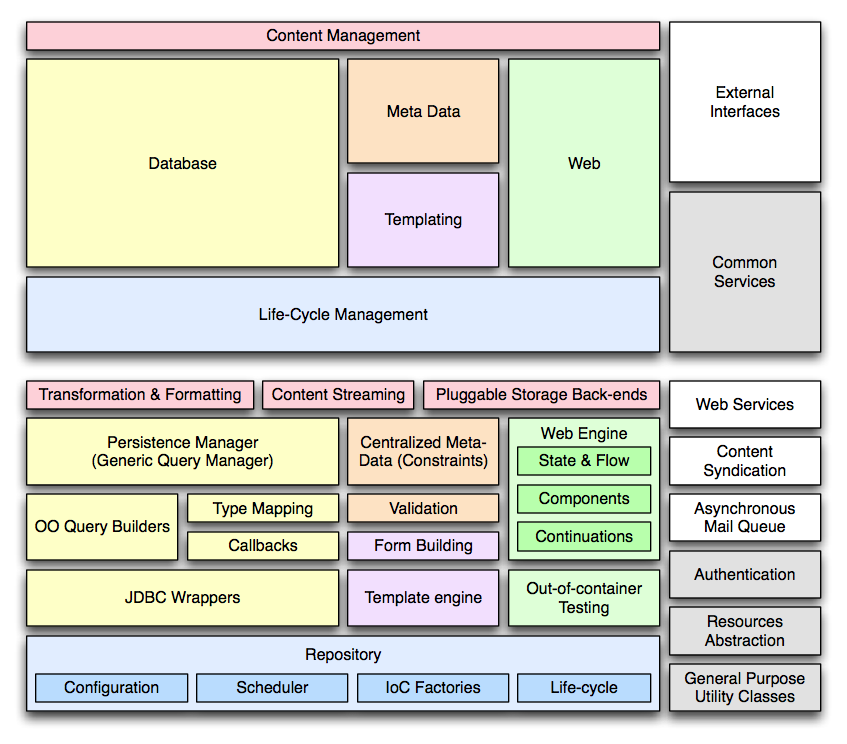 As shown in the RIFE application stack diagram (courtesy Geert Bevin, Uwyn), the services RIFE provides look very much like the kind of services and processes you might find in a traditional desktop application development environment framework, such as Microsoft’s Foundation Classes or Apple’s AppKit. RIFE provides high-level access to and management of web pages, databases, timed events and asynchronous task execution, email processing, exports of RSS/ATOM feeds, authentication and access controls and more.

Clearly, the design goals of RIFE were to take away as much of the grunt work in Web Application development as possible, allowing developers to focus as strictly as possible on the processes and features that make their application unique.

There’s a lot of stuff in there, which is all nicely covered at the RIFE Web Site, but some of the most interesting features are:

What makes RIFE different from my perspective compared to most (if not all) other frameworks out there is that the RIFE framework is, out of the box, a fully functioning web application. The standard RIFE distribution, called “RIFE JumpStart” is a basic application that is ready to be customized with which one can (and it is even demonstrated in some great videos over at the RIFE web site) create pretty substantial applications in under an hour.

Yet, for all that RIFE provides in terms of what’s built-in, the framework doesn’t preclude you from using, even embedding other web technologies into your applications. A lot of other technologies have been integrated into RIFE, including the very slick flash-based OpenLaszio and even AJAX toolkits like DWR.

Writing web applications using RIFE feels very different than writing in most other Java frameworks. As mentioned above, it it a lot more like working with an event-driven desktop application framework. For the most part you don’t write much infrastructure code – the stuff you often need to write before you get down to writing your application. RIFE provides all of the application skeleton, and you just plug in your features and then tell RIFE how they should be connected together to control the flow of your application.

One interesting aspect of using RIFE was what I would call a steep UNlearning curve: In particular I had to stop trying to invent reasons to try and stuff all sorts of processing into my web form handlers — RIFE handles most web form processing for you (in fact, it compiles your HTML into Java classes on the fly) and just hands you back the data you expect — or will automatically highlight errors or incorrect data that users need to correct before a submission can be completed. Once I got over my ingrained desire to write more code than I needed to and learned to just focus on my business logic, I was able to crank out amazing amounts of work.

This entry has gone on a bit longer than I intended, so I’ll close by suggesting that RIFE should be on the evaluation list for anyone is planning on developing a Web-based application: it’s fast, incredibly powerful, and very easy to get started using and to quickly see productive results from.