BlackBerry continues to dominate the general smartphone market and its grip on the business market is even tighter. But which BlackBerry is best for which business users? Here's a comparison of the three primary models: the Pearl, the Curve, and the World Edition.

BlackBerry continues to dominate the general smartphone market, and its grip on the business market is even tighter. But which BlackBerry is best for which business users? Here’s a comparison of the three primary models: the Pearl, the Curve, and the World Edition.

The Palm Treo was supposed to be the “BlackBerry killer.” So was Apple’s iPhone. Ditto for Google Android phones. It hasn’t happened and it’s doubtful that BlackBerry will lose its place at the top of the smartphone market anytime soon. Why? Because it is still the preferred platform for the most business users and IT departments — mostly due to security, manageability, and software that has always been designed for business users.

Since more IT departments than ever are looking at deploying BlackBerries, I’ve put together a quick look at the three primary BlackBerry product lines to help sort out which models are best suited to which types of users.

Caveat: This comparison does not included the BlackBerry Bold — which is set to debut widely in the fourth quarter of 2008 — since it is so new and IT departments have not been able to systematically deploy it yet (and TechRepublic has not been able to test it). For the purposes of this article, TechRepublic tested a Pearl, a Curve, and a World Edition on loan from Verizon Wireless.

The Pearl, also known as the 8100 series, is the smallest and most portable BlackBerry. It utilizes the candy bar form factor and was the first BlackBerry to introduce the trackball for navigation.

This model is best for users who are new to smartphones and don’t necessarily need to send a ton of messages but need to have a smartphone to check messages and occasionally send a short reply. For business users who are intimidated by smartphones, the Pearl can be a great first device. IT departments can view the Pearl as a gateway drug to the CrackBerry phenomenon.

The distinguishing features of the Pearl are:

The biggest drawbacks to the Pearl are the screen, which is small and can be difficult for prolonged reading, and the SureType keyboard (below), which is frustrating for some users to learn. Also, most models (except the 8120) do not include Wi-Fi.

The Curve, also known as the 8300 series, is arguably the most popular BlackBerry among business users. You’ll find lots of different iterations of the Curve among many different cell phone carriers. It represents a full featured business phone and e-mail device with a full QWERTY keyboard in the traditional rectangular smartphone form factor.

This is the smartphone for the average business user who needs to read and send a steady flow of e-mail, manage contacts and calendars, and view business documents. It is today’s meat-and-potatoes BlackBerry.

The distinguishing features of the Curve are:

The biggest drawback to the Curve (below) is that Wi-Fi and GPS are not included in all of the models.

This is the industrial-strength BlackBerry. It is a rugged device, and it caters to IT security and compliance by NOT including a built-in camera. Those features, in addition to its roaming capabilities and strong battery life, make it a great phone for road warriors, especially international travelers.

The distinguishing features of the World Edition are:

The World Edition (below) is larger, more bulky, and more expensive than the Curve. Also, for a phone in this price range and aimed at heavy travelers, every model should include Wi-Fi.

The Curve is the best all-purpose BlackBerry. If your IT department is looking for one BlackBerry model to standardize on, the Curve is your best bet. The Pearl can be good for smartphone newbies and the World Edition can be useful for some of your most active road warriors, but the Curve can suffice for even those two camps. The new BlackBerry Bold (right) could challenge the Curve as the most versatile BlackBerry for business users. 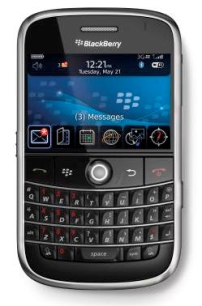 Most IT departments still prefer the BlackBerry platform for its centralized manageability and the enterprise-grade security of its mobile devices. Goodlink, Windows Mobile, and Symbian have all made strides and are approaching the same level of enterprise-readiness as BlackBerry, but none of them have been able to win over businesses at the same rate as BlackBerry.

Also, don’t forget that for those IT departments that want to take a more open approach to devices while still maintaining a BlackBerry infrastructure on the backend, you can use BlackBerry Connect to allow devices from other platforms, such as Palm, Symbian, and Windows Mobile.

Delivered Weekdays
Sign up today
Share: Sanity check: Best BlackBerry for business? Pearl vs. Curve vs. World Edition
By Jason Hiner
Jason Hiner is Editorial Director of CNET and former Editor in Chief of TechRepublic. He's co-author of the book, Follow the Geeks.