Sanity check: The two tides that are turning against Microsoft

Microsoft has a hoard of cash and several mature, money-making businesses. It’s not going anywhere any time soon. However, there are two big trends that Microsoft is not well-positioned to benefit from. Learn why.

If you clicked into this article thinking it would be a Microsoft bashapalooza or a vapid prediction about the downfall of the Seattle software giant then you’re going to be disappointed.

Microsoft isn’t going anywhere. It has a massive installed based of software and $20 billion in cash stuffed under its mattress. It could stop making new products today and survive for a decade off of licensing fees and support contracts from its current software.

See also: What would Larry Ellison do with Microsoft?

However, Microsoft’s role at the center of the information technology universe is very much in doubt, for two reasons. The first culprit is Microsoft’s own lack of focus and the second is a pair of industry trends that Microsoft is not well-positioned to exploit:

Two tides that are turning

The interesting thing is that Microsoft initially had its eye on these two trends over a decade ago and even positioned itself to take advantage of both of them. The company anticipated the Web browser as the next great application platform and that’s why it went all out to take down Netscape with Internet Explorer.

Microsoft also saw the potential for the smartphone to develop into a major force in computing. That’s why it took Windows CE and turned it into Windows Mobile. Earlier this decade Bill Gates even provided a vision of a future in which a smartphone could be a person’s primary computing device that could be wirelessly paired with a full keyboard, mouse, and monitor when the person sat down to work – a vision that will likely be brought to market by other vendors and not Microsoft in the next few years.

The problem in both cases is that Microsoft took its eye off the ball and has let both initiatives languish as it got distracted with ambitious projects like Xbox and Live Search. As a result, Microsoft is not very well-positioned in either case, and there’s nothing coming out of Redmond that makes it look like they will change course in 2009.

In terms of applications in the Web browser, keep in mind that I’m not just talking about cloud computing. Many business applications now use the Web browser as the front end platform to deliver applications to users, as I recently discussed in the article Have we now entered the post-OS era? This obviously makes the operating system increasingly insignificant since a user can access a browser using popular Windows alternatives Mac OS X and Ubuntu Linux.

Microsoft has talked a good game. There was Chief Software Architect Ray Ozzie’s 2005 memo on “The Internet Services Disruption” which talked about the steps Microsoft needed to take in the new Internet-powered world. There have been the over-hyped launches of Windows Azure, Live Mesh, and Windows Live. And there has been lots of talk about “Software+Services.”

In other words, the company’s strategy has been all over the map. Ultimately, Microsoft has talked about some interesting ideas but has failed to deliver a clear product roadmap to the market when it comes to Web applications.

Ozzie (right) recently remarked that “there has been a dramatic shift” at Microsoft toward the Web as a platform and he even reiterated the promise of a forthcoming Web version of Microsoft Office. But, the world is passing Microsoft by in the area where the company has its traditional strength and should be a leader. And it’s unclear whether or not Microsoft will make this a priority or will simply continue with a reactive Web strategy and ride out the traditional software model for as long as possible.

In terms of the smartphone, the story is much simpler. The Windows Mobile platform is old, awkward, and slow. It has been passed up technologically by BlackBerry, iPhone, and the new Palm WebOS. Even Google Android has leapfrogged Windows Mobile in terms of usability.

On the consumer side, the Apple iPhone and the forthcoming Palm Pre feel much more like small computers, and that’s the future of this market. Microsoft could have had a device to match if it wouldn’t have gotten side-tracked with the Zune music player, for example. But now, the company is going to need to take a page from Palm’s book and completely reboot its mobile OS if it wants to be a player in the smartphone world – and I don’t think it can afford not to. Smartphones are the future computers of the masses, especially in the developing world.

Too many north stars, or none at all?

For the first two decades of its existence, Microsoft had a clear north star: “A computer on every desk and in every home, running Microsoft software.” It used that mission statement to decide which projects to do, and – more importantly – which ones not to do.

That ambitious mission statement was the product of a populist vision of computing by Bill Gates, who wanted Microsoft to be the most important company in the technology business. And with the spread of Microsoft Windows and Microsoft Office by the end of 1990s, Gates had largely reached his goal.

The problem was that Gates and Microsoft weren’t just satisfied with the spread of the technology. They could never let go of the populist vision. As other popular technologies and companies took center stage, casting a temporary shadow over Microsoft, Microsoft developed a chronic habit of launching new products to compete with the popular new kid on the block. 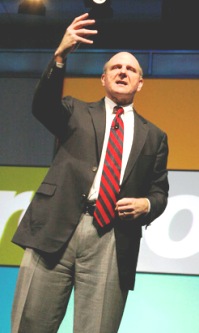 The result is a company that now has so many north stars that it effectively has none at all. Microsoft has lost its focus and its CEO, Steve Ballmer (right), has done little to help. While Ballmer is an excellent business administrator and motivator, he’s not the visionary Gates is. However, at this point he doesn’t even need to be a visionary. He just needs to let go of Microsoft’s populist aspirations and pick what kind of company the 21st century Microsoft is going to be, focus on 2-3 things, and spin off, sell, or shut down the rest of the stuff.

For example, Microsoft would be far more useful to the world – and far more profitable – if it focused on just these three things:

In this vision of Microsoft, it becomes a software platform and applications company that stretches from the smartphone to the desktop to the data center – and it quits wasting money on Xbox, Zune, and Live Search. This scenario may or may not be the answer, but at least it would have some focus.

Delivered Weekdays
Sign up today
Share: Sanity check: The two tides that are turning against Microsoft
By Jason Hiner
Jason Hiner is Editorial Director of CNET and former Editor in Chief of TechRepublic. He's co-author of the book, Follow the Geeks.