Scaling up vs. scaling out: Which makes more sense?

The day-to-day infrastructure administrator will inevitably come to a decision point on whether to scale up or scale out when it comes to servers and systems. IT pro Rick Vanover shares his opinions on one of today’s dividing issues.

A few years ago, we were frequently pressed with decisions such as whether or not to select two or four processor (socket) systems. Processor architectures have continually increased the number of cores available, and in many situations IT administrators could choose the smaller two-processor system in favor of loading up on cores. This was one of my first decision points of scale up or scale out during server virtualization. In terms of servers, scaling up is usually favoring a lesser number of more capable systems where scaling out is to add a higher number of relatively less powerful systems.

That argument seems so 2008 now. Today’s infrastructure teams have additional options for scale-out architecture like we’ve not had before. There are a few products that recently I have come across that give additional scale-out options, and resurface this argument. Here are a couple of thoughts about new storage and blade products that can make it quite easy to scale out.

The HP ProLiant DL980 G7 system was announced last week. This monster will offer up to 8 processors with up to 8 processor cores and a maximum RAM configuration of 2 TB. I have used ProLiant servers for quite a while and have found that the DL380 is a versatile platform, and have favored this model over the four-processor series. My practice has evolved to favor this platform for both physical operating system installs as well as virtualization installations. Use cases for this new eight-processor system include enterprise data warehouses, virtualization host hardware, or anything else that needs an incredible amount of compute power locally. Figure A below shows the HP ProLiant DL980 G7 server: 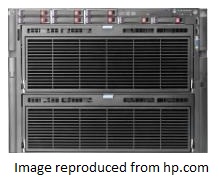 The use of blade servers can be an entirely separate debate by itself. Many administrators find benefits in blades when advanced management features and backplane benefits for intra-blade communication are considered. Blades are providing more features today, however. Last week at HP’s Technology Forum, the P4800 BladeSystem was showcased with a SAN and blade host infrastructure. This is targeted at virtual desktop infrastructure installations that scale up to hold the entire infrastructure in a logical bundle that includes hosts, storage, and interconnect networking.

Even more versatility with blades

Recently, I attended the inaugural Hitachi Data Systems (HDS) Geek Day. HDS Geek Day was a social media event for bloggers and HDS engineers. There was a session dedicated to scaling out versus scaling up and HDS blade computing products. We learned that HDS will soon market their blade products in the U.S.

The BladeSymphony series may, at face value, appear like any other blade chassis of eight blades in a 10U enclosure. Blade systems are always feature-rich compared to their chassis server counterparts, but this series has one important distinction. The BladeSymphony series supports logical portioning (LPAR) and hardware virtualization referred to as Virtage, which allow administrators the choice of assigning eight blades individually or assigning all of the resources as one logical server to make the entire collection of blade resources function as one logical server with 64 cores. This gives the BladeSymphony a unique position in being able to both scale up and scale out. Couple this with available storage blades, and virtually every workload seems possible. Figure B shows the BladeSymphony 2000 system:

Unlike their competition, Hitachi can pull a trick out of their hat due to the fact that they have direct access to the supply chain of many electronic components. In fact, HDS Senior Director of Product Strategy Michael Hay said during the event that their direct access (as the OEM) to underlying component offload technologies can be the differentiator in comparing commodity components amongst different vendors.

Scale up or scale out?

These products are just what I have come across in the last few weeks that make me circle back to this age-old decision. Where are you on scaling up or scaling out? Consider also entry cost to scaling out. That has historically been my biggest obstacle to scaling out, as the unit cost of scaling up becomes easier to absorb. Please share your comments on scaling out or up below.