Scoreboard: Who are the highest rated leaders in the tech industry?

Who is the best judge of a tech leader's performance? It's not Wall Street analysts or the general public, it's the people inside the company. Based on ratings from Glassdoor.com, see how the tech industry's top leaders, from Steve Ballmer to Larry Ellison to Steve Jobs, are rated by the people who work for them.

Who is the best judge of a tech leader’s performance? It’s not Wall Street analysts or the general public, it’s the people inside the company. Based on ratings from Glassdoor.com, see how the tech industry’s top leaders, from Steve Ballmer to Larry Ellison to Steve Jobs, are rated by the people who work for them.

When I looked up technology executives on Glassdoor.com to see how they were rated by their employees, I was surprised at how they naturally divided themselves into two groups. I picked 14 leaders and they ended up dividing evenly between seven rated 62% or higher and seven rated 48% or lower.

I had already planned on making 50% the natural dividing line (and it was), but it turned out that none of the leaders fell in the 49%-61% window. To me, that meant that tech industry employees were generally not ambivalent about their leaders. The leaders were either widely admired or couldn’t gain approval from even half of their employees.

Before we dive into the list, keep in mind that Glassdoor.com is not scientific, but it is statistically significant (because nearly all of these tech companies have over 100 responses). The data is based on anonymous feedback from employees, who self-select themselves to participate. Glassdoor’s methodology requires participants to go through a fairly rigorous submission process, and that naturally limits the amount of false submissions. However, because it is anonymous, there’s no verification process to determine that the participants are legitimate company employees.

Nevertheless, the information from Glassdoor is extremely interesting, and in most cases it is consistent with information I’ve read or heard from insiders at the companies mentioned.

In the lists of the highly-rated and poorly-rated tech leaders below, I’ve listed them from high to low based on their approval rating. I’ve linked the company names to the full company profiles on Glassdoor.com, where you can see the updated numbers and lots of additional comments from the employees who participated. And I’ve also included the ratings that employees gave to their respective companies, beyond just the leaders.

It’s not surprising that Steve Jobs (right) is at the top of the list. He and Apple have been on an amazing run over the past decade with the rise of the iPod and iTunes, the resurgence of the Mac, and of course, the launch of the iPhone. Plus, he is an almost cult-like leader who inspires–and requires–absolute loyalty.

It’s also not surprising that Eric Schmidt and John Chambers are so highly regarded, since their companies have been on multi-year hot streaks. These three top-rated CEOs have widely divergent leadership styles, which shows that successful leadership is not about methodology or personality type.

Conversely, on the poorly-rated list it’s not surprising to see it dominated by CEOs whose companies have been in a tailspin. Palm, Sun, and Motorola have all been stuck in reverse, even before the current economic downturn, so it’s not much of a shock to see their chief executives mired at the bottom of this list. 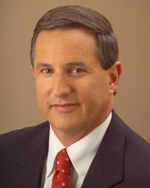 However, it is a little surprising to see Mark Hurd (right) from HP in the lower list. After all, HP has jumped to the number one spot in PC and server sales under Hurd’s watch and produced a series of strong financial results. Despite all that, Hurd has a low 41% approval rating and employees gave the company a 2.8 rating, the second worst on this list. Only Motorola is rated lower.

When you have a leader who drives top-tier results but still has a company morale problem, that person is often called a “scortched-earth” leader–someone who gets things done but burns everyone out in the process. That could be what’s going on with Hurd.

The other mild surprise is Microsoft’s Steve Ballmer, who only had a 44% approval rating among his troops. While Microsoft’s stock price has been stuck in neutral for years and the company’s reputation in the general public is mixed, 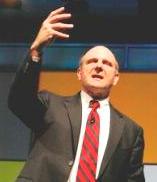 during the past decade Microsoft continued to grow its revenue and its product lines and expand its workforce. Its employees even rated the company at 3.7–only Google, Apple, and RIM scored higher.

The biggest problem Ballmer (right) may face with Microsoft employees is that he’s not Bill Gates. While Ballmer has been the Microsoft CEO since 2000, he remained in the shadow of Gates until mid-2008 when Gates retired from his full-time role at the company. While Gates was a visionary, Ballmer is simply a businessman. They complimented each other well, but without Gates what is Ballmer’s vision for the company and the computing industry? It’s unclear. And that is likely the culprit for his lukewarm endorsement from the Microsoft rank and file.

Delivered Weekdays
Sign up today
Share: Scoreboard: Who are the highest rated leaders in the tech industry?
By Jason Hiner
Jason Hiner is Editorial Director of CNET and former Editor in Chief of TechRepublic. He's co-author of the book, Follow the Geeks.