Mark Underwood takes a look at IBM's Watson project and what it means in more practical terms of applying AI to the future of network management.

This past year has been a publicity bonanza for IBM’s Watson project. If you haven’t been following it, this introduction by the NYT’s Clive Thompson last summer will get you up to speed. On the surface, Watson is software sitting on very pretty hardware, designed to provide Jeopardy answers (which are questions, of course), and do it really well – as well as champion Jeopardy players. Dig a little further and it’s clear that Watson is a project to bring AI back into the forefront of software engineering, and learn that this has real implications for network managers. Well, it might… someday. Before I get to its relevance to network management, here’s some background on the Watson Project and what it can and can’t do.

Expensive and probably worth it 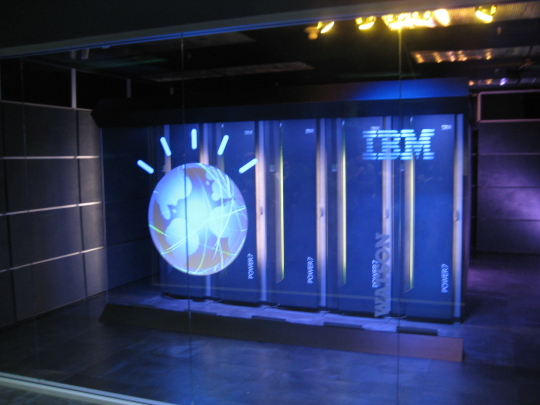 What does a reported $3.2B of product development, R&D and integration buy you? There’s the cool gear part — Watson uses “the equivalent of 2,800 computer nodes,” and has offline storage of 10TB. But if you’re among those thinking that it’s all about looking up stuff fast, plan to spend some time doing task decomposition with a good analyst. That few billion buys a lot. Jeopardy’s question designers enjoy periodic forays into the puns, ambiguities, and coincidences of language, and Jeopardy is strict about how successful responses can be phrased.

Watson is able to deconstruct Jeopardy “answers” into problems that it can launch a hundred algorithms simultaneously to solve. This parallelism, key to the success of IBM’s chess-playing Deep Blue project, allows the software to try multiple solutions, score their plausibility, and even test its “question” before hitting the buzzer — all in a split second. With help from its tutors, Watson has been coached to learn from its mistakes, and from Jeopardy category-specific (“column”) patterns. Once the game is underway, it can exploit new solution opportunities with comparatively little additional effort in comparison to human contestants.

Watson is not a completely new approach. It integrates previous work in partial knowledge, natural language understanding, and machine learning. As the AI magazine survey of Question Answering systems illustrates, the problem has been studied for some time. What is new? As one writer put it, “Watson doesn’t just hunt through materials like a search engine.” Watson was designed for specific tasks within the Jeopardy framework. “It builds on its understanding of clues in the vernacular of Jeopardy the way a puzzler would solve a Will Shortz New York Times crossword puzzle.”

Apart from the incalculable promotional value, the back story may be the unglamorous, steady, incremental attack on the problem of machine intelligence, as opposed to the quantum leaps the Jeopardy drama suggests. As late as 2008, Watson was running on hardware that took two hours to answer some questions. Other teams at IBM were brought into to speed things up. In addition to Watson’s speed, related IBM products may be more interesting to the network administration community.

IBM’s Infosphere Streams product is being deployed at Columbia University Hospital to detect changes in the symptoms of brain injured patients, and a recent press release claims that Sequoia Hospital has reduced its mortality rate in cardiac surgeries by more than 50% through the use of IBM predictive analytics. IBM’s Infosphere product suite contributed to Watson, and IBM’s R&D pipeline has other tricks up its sleeve. Consider that IBM’s Haifa Research Lab has been involved in complex event processing ideas for seven years. See also their Content Analytics, InfoSphere Warehouse, and InfoSphere BigInsights offerings. Not that I am merely a publicist for IBM; Watson might be needed to sort out the current patchwork of IBM acquisitions and offerings.

Aside from the oohs and ahs, bear in mind what Watson can’t do. It can’t drive, it can’t migrate 7,145 miles like the Alaskan bar-tailed godwit, .It can’t create a Stuxnet, catch a baseball, write an essay, avoid a flyswatter as well as a fly, tell you which factors should be considered when choosing between a Cisco and a Juniper router, or even make sense of a report from IBM’s own Tivoli.

A post in the New Yorker quotes a skeptical cognitive scientist Steven Pinker who, citing the opaqueness of the technologies used to build Watson, rightly points out that AI “has become disengaged from cognitive science.” Worse, for non-IBMers, he worries that “we won’t be able to know how much of the program’s success to attribute to humanlike or superhuman intelligence, and how much to Jeopardy-specific hacks.” True, though perhaps Pinker was unaware of the IBM / Carnegie Mellon Open Advancement of Question Answering initiative. One hopes that useful domains, such as sensible subsets of expertise within network management, may be within the realm of possibility.

Watson’s success is also due to extensively edited and hyperlinked resources such as Wikipedia. Following a different track (as pointed out in the PBS special on Watson), Cycorp has worked for many years to develop complex rules with deep understanding of specialized topics. But one must guess that if the presence of Wikipedia and online encyclopedias had been on the radar, a different approach to using third party knowledge frameworks might have been chosen long ago.

When a software development firm where I worked suffered a half-day Internet outage a few years ago, I joked that developer productivity tanked because developers could no longer look for solutions to specific error messages from Microsoft and other products. Effective, fast help for system administrators facing increasingly complex network troubleshooting chores has yet to be developed.

Watson’s caretakers, like any parents, must decide what sort of education is best suited for Watson’s abilities. Can Watson be used for benign, useful purposes such as network management, network defense, or will others seek to use it for offensive operations and surveillance?

Good questions, and let the debate begin. But the larger lesson from Watson’s success at Jeopardy is how it guides what we ourselves invest in learning.