Shut down Windows 8 from the keyboard

Shut down Windows 8 by just pressing a key on your keyboard, pressing a button on your computer, or closing the lid on your laptop.

After a recent discussion with a friend of mine about getting used to using the [Windows] key on the keyboard in Windows 8 instead of pining away for the Start button, my friend asked about shutting down Windows. As the discussion heated up in a friendly manner, he snarkily said, “There’s no shut down key on the keyboard!” As a quick retort, I said “Well, there can be!”

This blog post is also available as a Screenshot Gallery.

I then told him that using a keyboard with programmable hot keys, one could easily configure a key on the keyboard to Shut down Windows 8. Even without such a keyboard, a plain old desktop shortcut can be configured to respond to a keyboard shortcut. As the discussion evolved, I also pointed out that you can shut down Windows 8 using the power button on your desktop PC or closing the lid on a laptop.

Later, I realized that while I had covered several ways to shut down Windows 8, I had not written an article about these techniques.

However, shutting down Windows 8 can be simplified to just pressing a key on your keyboard, pressing a button on your computer, or closing the lid on your laptop. In this edition of the Windows Desktop Report, I’ll show you how.

Since not everyone has a keyboard with programmable hot keys, I’ll start with the shortcut method. In the article about integrating a Shut Down menu into the Desktop context menu, I showed you a table containing eight command lines that perform all the options typically associated with terminating an active session. For your convenience, these eight command lines are shown in Table A.

Table A: Command lines that perform all the options typically associated with terminating an active session 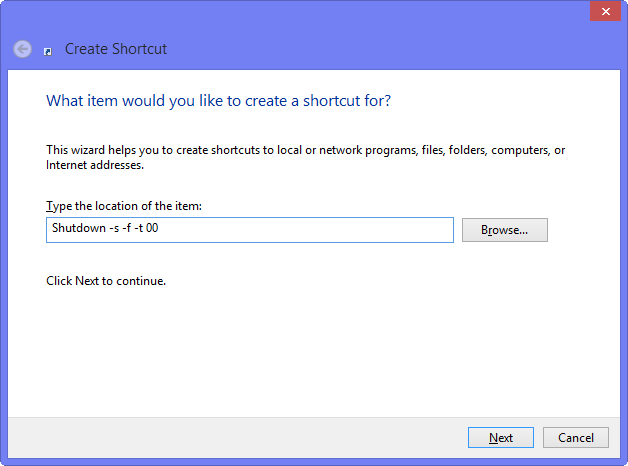 When the Create Shortcut wizard prompts you, enter the command line to shut down window.

Once you have created the shortcut, right-click on it and select the Properties command. When you see the Properties dialog box, select the Shortcut key text box and press the key(s) that you want to use to shut down your Windows 8 system. Of course, you’ll want to use an odd keystroke combination that won’t interfere with other existing keyboard shortcuts and will not be easy to accidentally press. As you can see in Figure B, I have used [Ctrl] + [F12]. 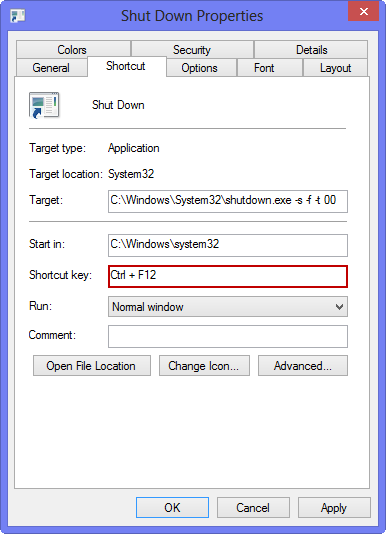 You’ll want to use an odd keystroke combination that won’t interfere with other keyboard shortcuts.

I have a Microsoft Natural Ergonomic Keyboard 4000, and have installed the Free Microsoft Mouse and Keyboard Center, which allows you to easily program the available hot keys on Microsoft keyboards and mice. While many of the keys on this particular keyboard are assigned specific actions, such as volume controls or launching Internet Explorer, there are five keys, called My Favorites, at the top center of the keyboard that aren’t assigned to any special operations. Using the Microsoft Mouse and Keyboard Center, you can easily configure these keys to access Web sites, open files, launch programs, and even run command line tools.

Returning to eight command lines shown in Table A above, I chose five to assign to the customizable hot keys on my Microsoft keyboard: Shutdown, Restart, Hibernate, Sign off, and Switch.

After launching the Microsoft Mouse and Keyboard Center, I accessed the keyboard section’s basic settings, located My Favorites, and typed in the command lines to initiate my chosen options, as shown in Figure C. Now, in addition to shutting down my Windows 8 system from the keyboard, I can restart it, put it into hibernation, sign off, or switch users. (I later affixed custom stickers to those keys to help me remember which key was which.) 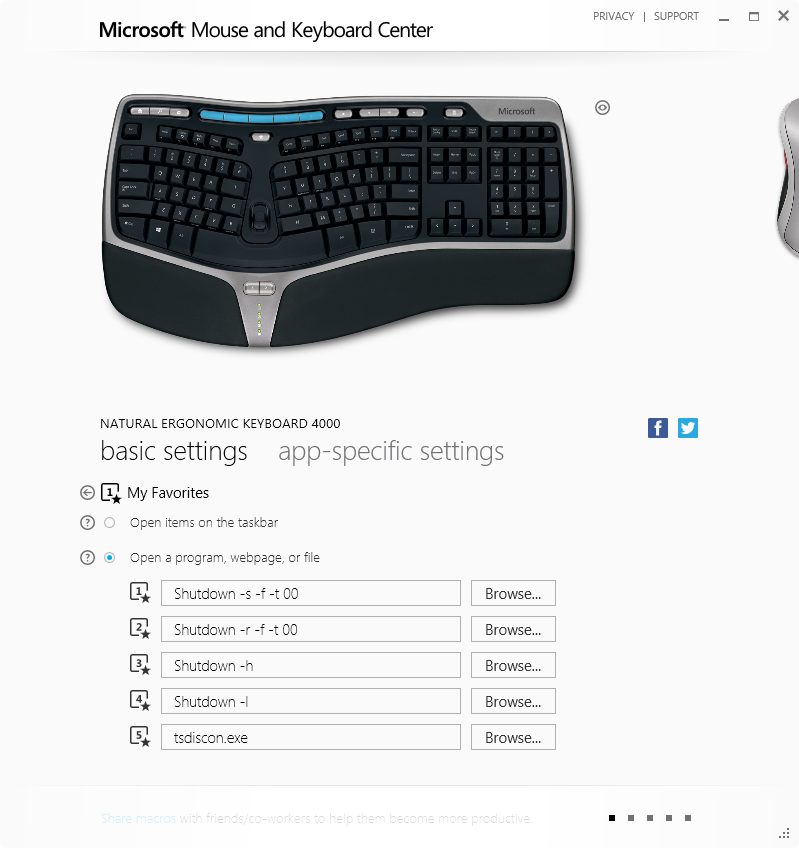 The Microsoft Mouse and Keyboard Center makes it easy to configure these keys to shut down Windows 8.

Most folks don’t associate pressing the power button on a PC with a controlled shut down procedure, because in the old days doing so would just turn off the power – akin to pulling the plug of a running PC. However, pressing the Power button on the front of your PC will initiate the exact same procedure as selecting Shut down from Windows 8’s Power Charm, as illustrated in Figure D. 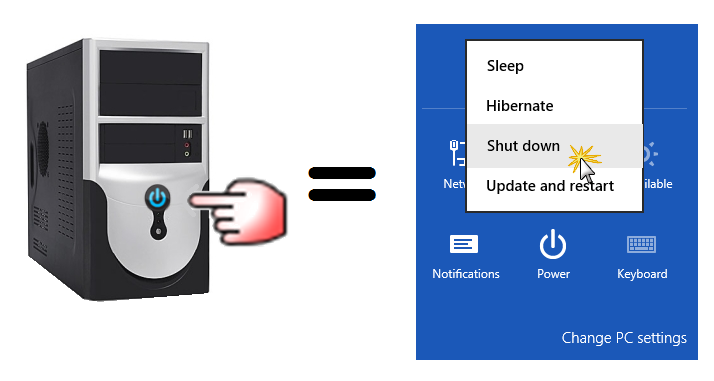 Pressing the Power button is the same as selecting the Shut down command.

You can quickly access the Power button configuration options from the Search Settings page.

Alternatively, you can move your mouse pointer to the lower left corner of the screen and when the Start Screen button pops up, right click to display the WinX menu. You can then select the Power Options command. When the Power Options window appears, select the Choose what the power button does command. This process is illustrated in Figure F. 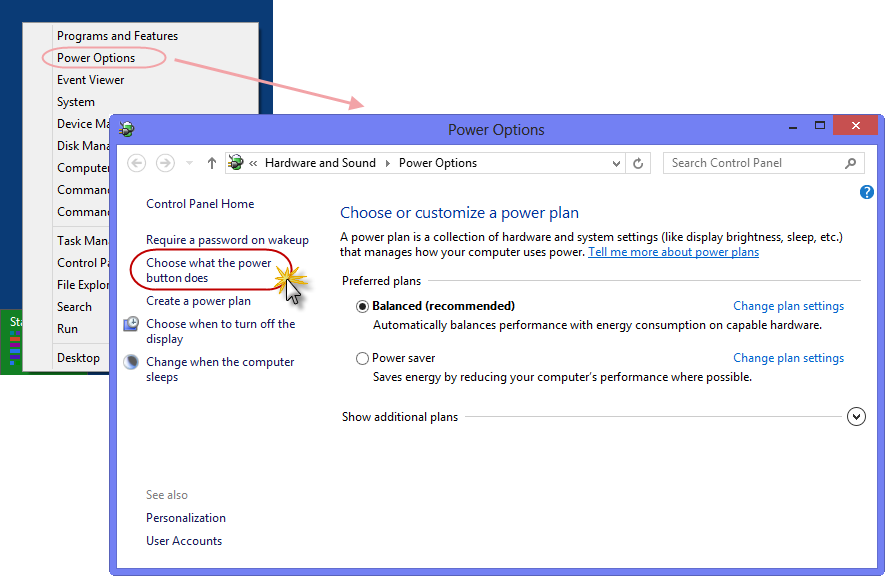 From the Power Options window, select Choose what the power buttons do.

When you get to the System Settings page, locate the Power button settings section and you’ll see that the option is already configured for Shut down, as shown in Figure G. 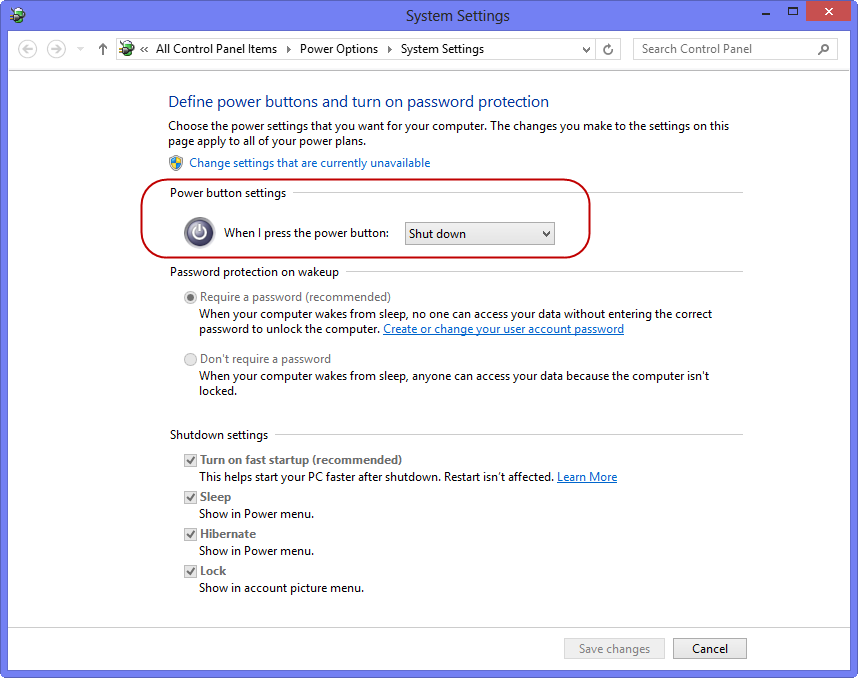 By default, the Power button settings should be configured as Shut down.

Now, if you don’t want the Power button to shut down the system, you can click the drop down arrow in the Power button settings section and select one of the other options, such as Hibernate or Sleep, as shown in Figure H. Once you make a change, just click the Save changes button and then close the Power Options window. 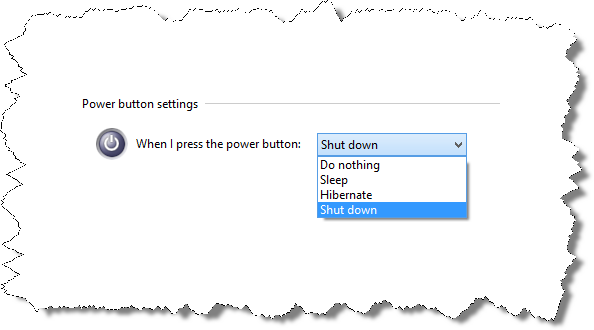 In addition to Shut down, you can configure the power button to put the system to sleep or into hibernation.

There are actually quite a few keyboards out there that have a Sleep button on them, like the keyboard shown in Figure I. As you can imagine, the Sleep button is automatically configured to put your Windows 8 system into Sleep mode. 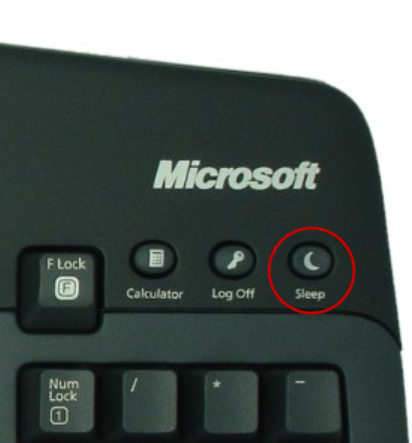 Many keyboards have a Sleep button.

When you access the System Settings page on a system with such a keyboard, you’ll find that the section is titled Power and sleep button settings. If you click the drop down menu, you can also choose Hibernate, as shown in Figure J. 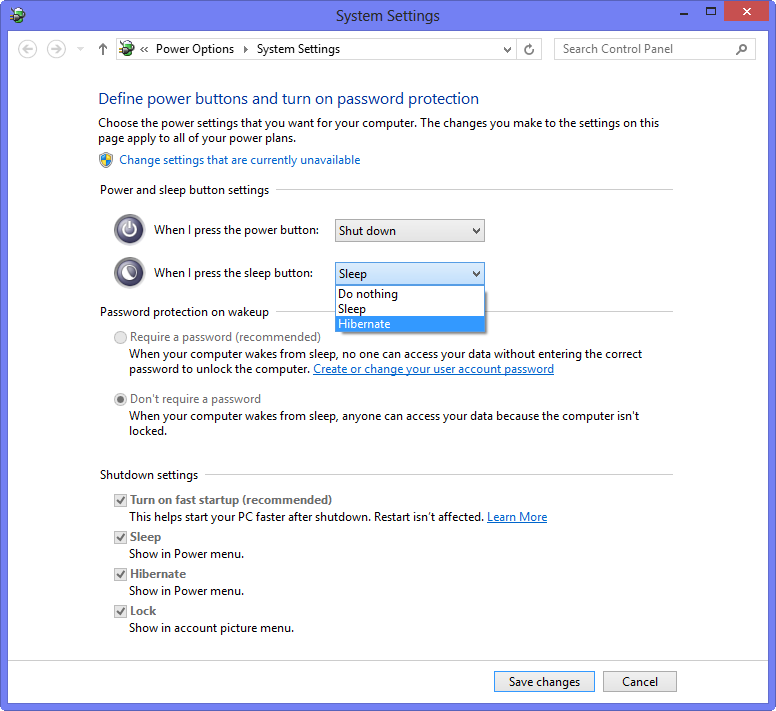 The System Settings page allows you to reconfigure the Sleep button.

On a laptop, you have one more option for terminating an active session – closing the lid. When you access the System Settings page on a laptop, you’ll find that the section is titled Power and sleep buttons and lid settings. As you can see in Figure K, on this particular laptop, I have configured the When I close the lid setting to be a Shut Down operation when on battery and a Hibernate operation when plugged into AC power. 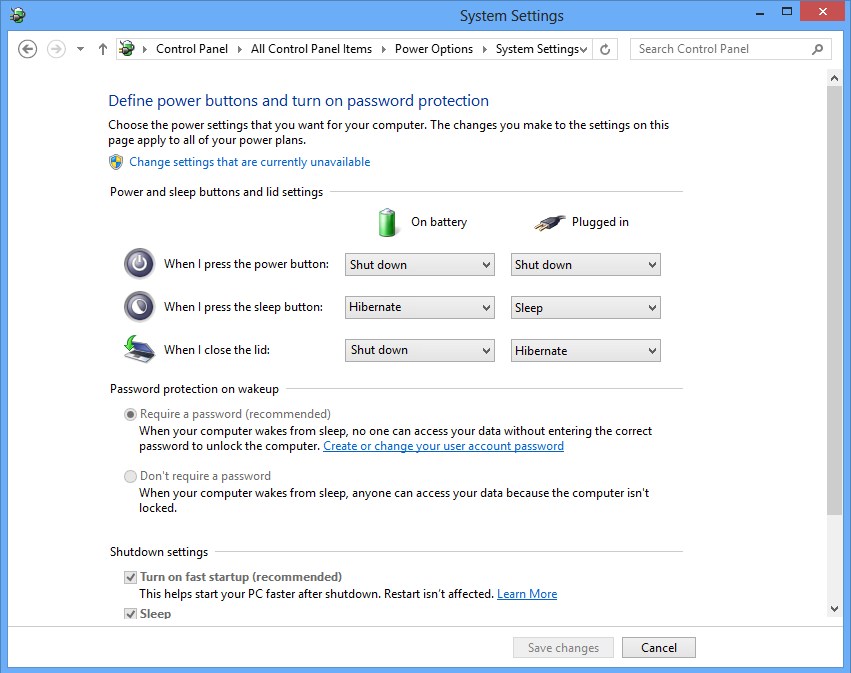 On a laptop, you can configure the various operations to occur when you close the lid.

As you can see, there are a number of different ways that you can shut down a Windows 8 system. What method do you currently use? Are you interested in employing one of the keyboard or power button techniques shown in this article? As always, if you have comments or information to share about this topic, please take a moment to drop by the TechRepublic Community Forums and let us hear from you.

Share: Shut down Windows 8 from the keyboard
By greg shultz
My first computer was a Kaypro 16 \"luggable\" running MS-DOS 2.11 which I obtained while studying computer science in 1986. After two years, I discovered that I had a knack for writing documentation and shifted my focus over to technical writing.