No longer just a luxury, staff now rely on remote connectivity to office systems to complete work from home. Fortunately, Apple systems benefit from remote connectivity capabilities, too. Windows-based offices that deploy Macs will find Macs capable of completing painless secure remote desktop connections to Windows systems and VPNs, as well as to other Macs. Erik Eckel shows you the options.

Remote connectivity has grown from a luxury to a requirement in the few short years since Windows XP helped popularized the feature. Staff now rely on remote connectivity to office systems to complete work from home, after-hours or on weekends.

Fortunately, Apple systems benefit from remote connectivity capabilities, too. Windows-based offices that deploy Macs, whether for one employee or entire departments, will find Macs capable of completing painless secure remote desktop connections to Windows systems and VPNs, as well as to other Macs.

Apple Remote Desktop, shown in Figure A, is aimed primarily at administrators as a management tool. It provides a seamless method of remotely accessing one Mac desktop from another. In addition to supporting software distribution, real-time user support, detailed performance reporting capabilities, and the ability to automate routine tasks (such as updating software applications and the Mac OS), the Apple Remote Desktop enables performing Spotlight searches across multiple systems, script deployment and execution, and inventory reporting. 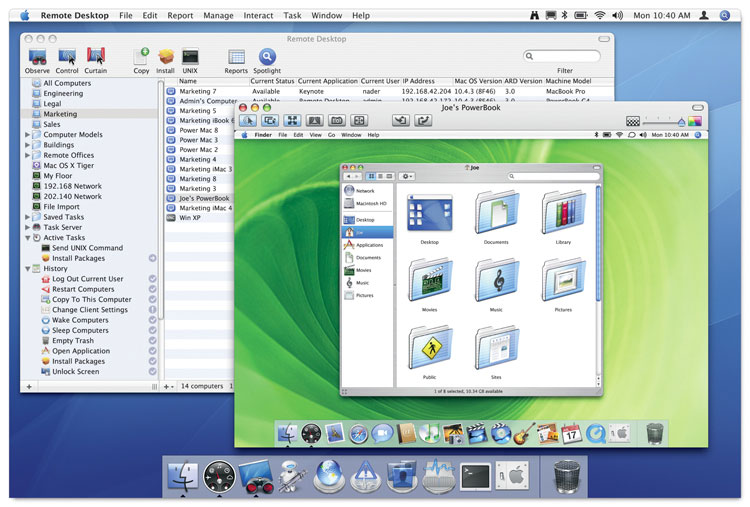 Priced at $499 for the Unlimited Managed Systems edition or $299 for the 10 Managed Systems version, Apple's remote desktop software isn't exactly free. Regardless, it's a potent remote connectivity application that any administrator charged with maintaining for than a half-dozen Mac systems should consider deploying. The expense is quickly offset, thanks to the application's ability to automate common tasks and enable centralized administration.

Should administrators wish, they can also choose to remotely administer other platforms using Apple's remote software. Any VNC-enabled computer can be remotely managed using Apple Remote Desktop, including Windows- and Linux-based boxes.

More often than not in many organizations, administrators and users must connect to Windows systems. Fortunately, Microsoft provides Mac users with a free Remote Desktop Connection Client For Mac application. Once installed on the Macintosh, the software makes it easy for Mac users to connect to and control Windows systems.

Using the Local Resources tab, Mac users can specify where sounds play, whether local drives and printers should be connected to the remote system session, and the key to be used as the Windows [Alt] key. This last element is particularly important, as Windows use often requires use of the [Alt] key, which Mac keyboards don't supply. By default, the Mac's [Option] key is set to serve as Windows' [Alt] replacement key (although Mac users can opt for another selection, should they wish).

The Programs tab is used to specify programs (and accompanying program locations) that should be run upon starting a session. The Performance tab, meanwhile, is used to optimize remote desktop connections. Mac users can configure the speed of their network connection, as well as specify whether desktop backgrounds, themes and other items (all which can slow a remote session) should be displayed.

Once connected, the remote Windows desktop appears within Mac OS X in its own window, as shown in Figure B. However, Mac users receive full-featured control over the Windows desktop (receiving essentially all the same capabilities as if they were physically seated at the Windows system). 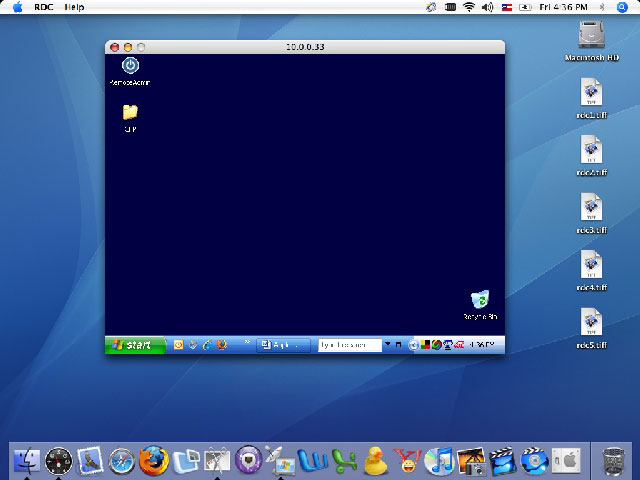 Since Apple's remote administration utility supports sharing the end user's mouse and allows administrators to chat and share an end user's screen, the tool provides a complete remote support solution. By observing the steps or processes an administrator demonstrates, users (and even large numbers of students or staff) can receive instruction on performing specific actions simultaneously.

Frequently traveling and mobile employees require access to documents, spreadsheets, presentations, and e-mail powered by or stored on corporate servers. In the past, the Mac's VPN capabilities were somewhat limited, but continued refinements in Mac OS X have brought the Mac up to speed with Windows.

When starting Internet Connect, Mac users are greeted with a fairly simple menu. However, the menu's basic interface belies its potential. In addition to supporting L2TP VPNs, this software also supports PPTP connections.

Internet Connect walks users through configuring a VPN connection. Before completing a VPN link, Mac users will likely need to obtain several pieces of information from their network administrators, but IT professionals will find the tool simple to configure.

Internet Connect begins by asking whether users wish to create an L2TP over IPSec or PPTP VPN connection. Next, users must specify a username/password on the Mac system possessing administrative rights. This is a security precaution that helps prevent regular Mac users from creating VPN connections without proper authorization.

Apple users can then typically complete a VPN connection by supplying the server address, an account name and an appropriate password, and pressing the Connect button.

Once connected, Mac users can browse server shares using the Finder, their favorite Web browser,and a host of other applications.

Networks featuring more complex network configurations may require that additional parameters be set or specified, however. Depending upon the type of VPN in use (L2TP or PPTP), the available options differ within Internet Connect.

For L2TP connections, administrators and users alike can specify the server address, an account name, the user authentication method (which includes password, RSA SecurID, Certificate, Kerberos, and CryptoCard), machine authentication method (Shared Secret versus Certificate), Group Name, and even whether the VPN should be enabled on demand. All of these settings are configured by pressing on the Configuration drop-down menu and selecting Edit Configurations.

A host of providers develop applications, utilities, and resources aimed at better integrating Macs with other platforms. As a result, many third-party remote administration tools exist for the Mac, including a wide variety of VNC programs. Chicken Of The VNC is one leading VNC port on the Apple platform; OSXvnc is another.

Perhaps the best known product for connecting Windows systems, meanwhile, to Macs is Symantec's PCAnywhere. Version 12.1 of the software supports connecting everything from Windows XP and Vista PCs (among others) to Mac OS X computers, whether the Macs are PowerPC or Intel-based. Besides including file transfer capabilities, Symantec's PCAnywhere includes 256-bit encryption, remote management tools, and connectivity wizards to simplify administration.

No longer do Macs pose remote connection or VPN liabilities. Numerous tools, including free applications from both Microsoft and Apple, help ensure Mac users enjoy the same freedom of mobility as do Windows staff.

Erik Eckel owns and operates two technology companies. As a managing partner with Louisville Geek, he works daily as an IT consultant to assist small businesses in overcoming technology challenges and maximizing IT investments. He is also president o...