To ease the pain of deploying a new operating system across many workstations, Microsoft improved its method of creating desktop images in Windows Vista by creating the Business Desktop Deployment 2007 tool. In this article, Brien Posey shows how to finish creating the deployment image.

Deploying a new operating system like Windows Vista across
many workstations in an organization can present challenges. To ease the pain,
Microsoft improved its method of creating desktop images in Windows Vista by
creating the Business Desktop Deployment 2007 (BDD 2007) tool. In the article “Using the
Deployment Workbench to install Windows Vista“, I introduced this tool
and began showing you how to create a Vista deployment image. So far, we have
copied the Vista system files from the installation CD and associated a few
applications with the deployment image. In this article, I will continue the
discussion by showing you how to finish creating the deployment image.

Windows Vista ships with an extensive number of device
drivers, so Vista should be able to identify even the most current hardware.
When Windows XP was first released, it too had drivers for the vast majority of
hardware components that were commonly found on workstations. Over time though,
new hardware devices were created, for which Windows XP did not have a built in
device driver. Likewise, the drivers that were included with Windows XP quickly
became outdated as hardware manufacturers updated their device drivers.

In order to demonstrate the technique for adding a device
driver to a deployment image, I am going to add a device driver for a Netgear
gigabit Ethernet card to my deployment image. All of the computers on my
network are equipped with this particular network card, and I’m honestly not
sure if Vista comes with a driver for it or not. Rather than take a chance on
using a built-in driver that may or may not exist, let’s add the Netgear driver
to the deployment image.

To do so, open the Deployment Workbench and navigate to
Distribution Share | Out of Box Drivers. When you do, the Details pane will
display any device drivers that have been associated with the deployment image.
As you can see in Figure A, there are no drivers on this list by
default. 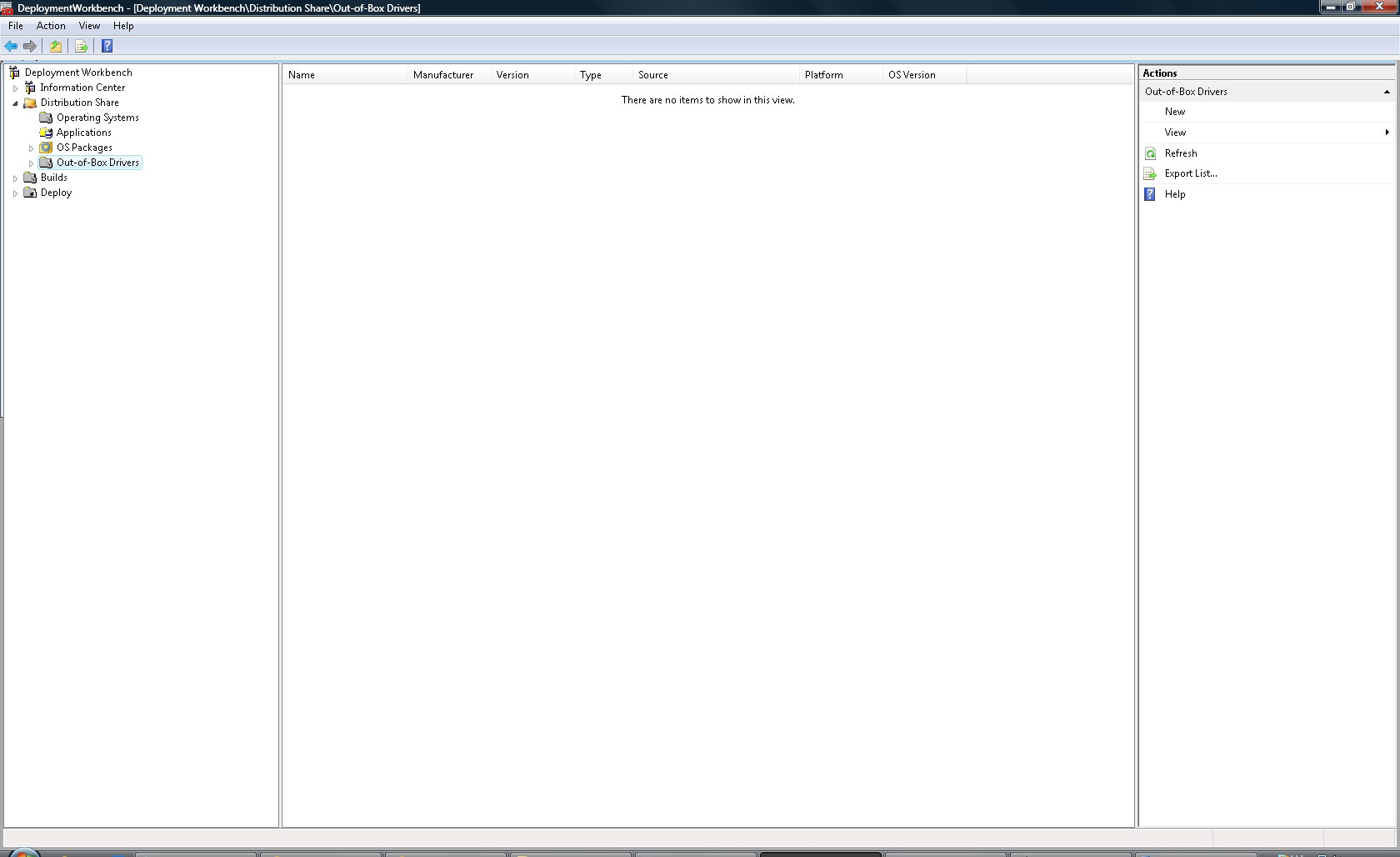 The Deployment Workbench
does not list the built-in device drivers.

Now, right-click on the Out of Box Drivers container and
select the New command from the resulting shortcut menu. When you do, you will
see the screen shown in Figure B, which prompts you to enter the
location of the device drivers that you want to include in the deployment
image. 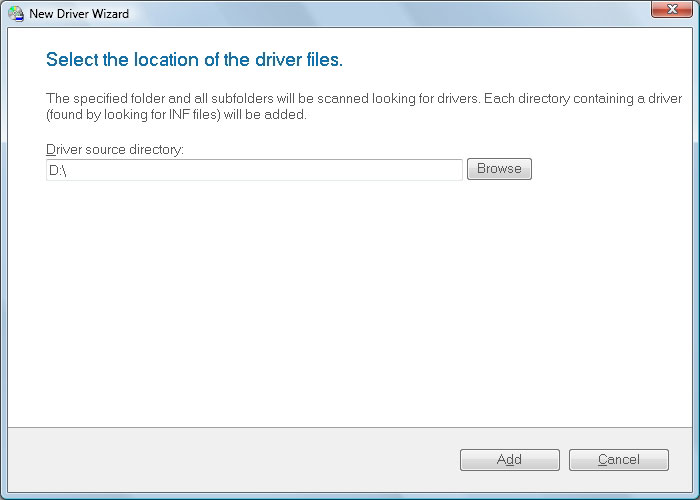 The New Driver Wizard
prompts you for the location of the device drivers that you want to include in
the image.

If you look closely at the image, you will notice that the
text above the Driver Source Directory input field indicates that all of the
subdirectories beneath the location you specified will be scanned for device
drivers. Since that’s the case, I just entered the path to my Netgear
installation CD. This CD contains drivers for network cards other than the
model that I use, but device drivers are small, so it doesn’t really matter if
drivers other than the ones that I need are included in the deployment image. I
would rather include unnecessary drivers than to try to look through the CD’s
directory and hope that I choose the correct subdirectory.

Press the Add button and the Deployment Workbench will begin
scanning the specified location and its subdirectories for device drivers. When
the process completes, any device drivers that have been detected will be
imported into the deployment image and listed in the Out of Box Drivers
container, as shown in Figure C. 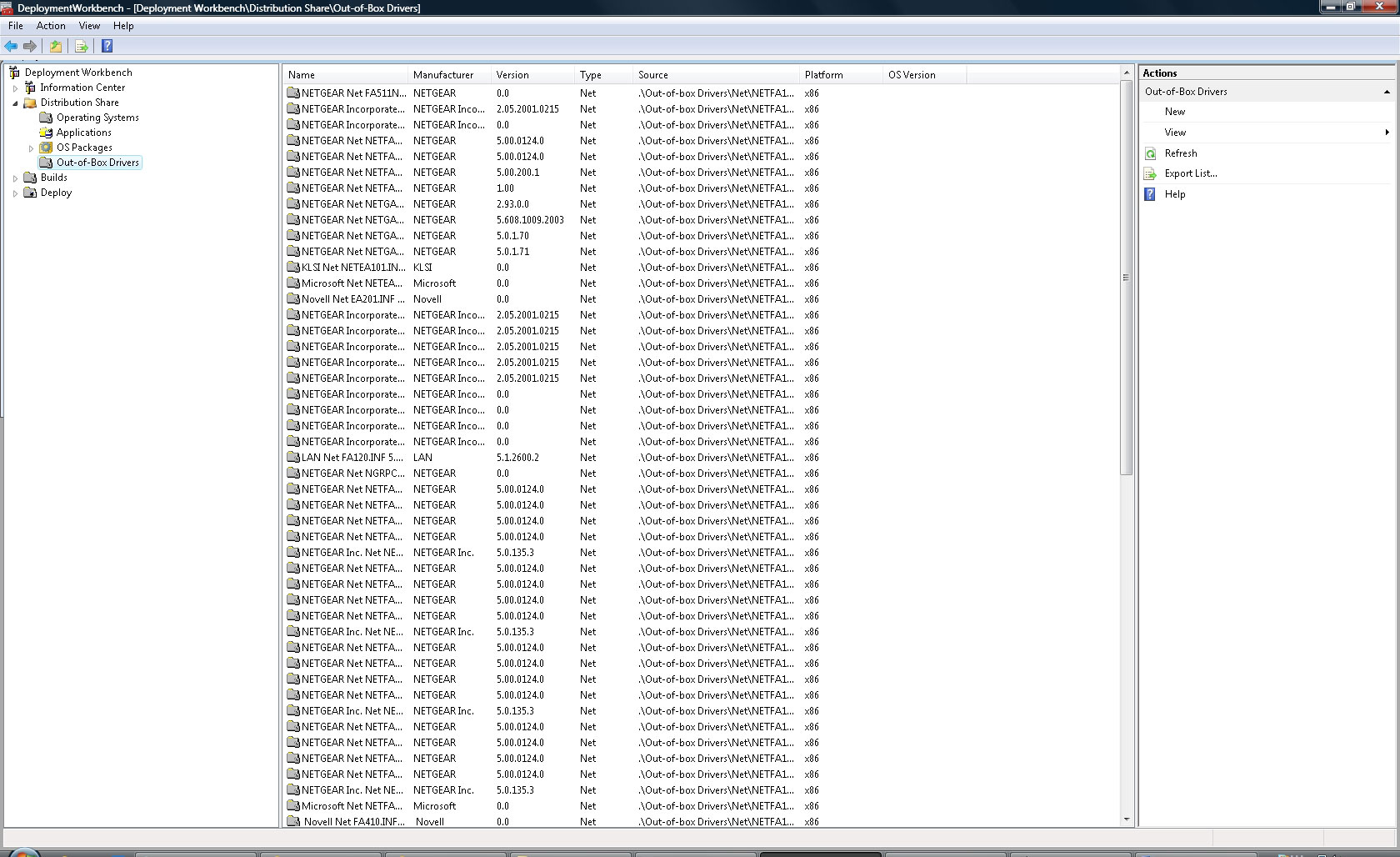 Drivers that have
been detected are imported into the deployment image and are listed in the Out
of Box Drivers container.

As I’m sure you know, the days of deploying an operating
system and then never touching it again until the next OS is released are long
gone. Windows Vista is a fairly new OS, and yet there are already plenty of
patches that have been released.

Patching a newly deployed OS can be somewhat problematic for
a couple of different reasons, firstly because the initial patching process can
be annoying to the end user. For example, last week I set up a new machine that
was running Windows Server 2003. I applied Service Pack 2 immediately after
deployment, and a short time later, the machine began receiving updates from my
WSUS server. The problem is, not all of the updates can be applied
simultaneously. Each time I received a message that updates were available, I
would apply the updates and then reboot the machine when prompted. Shortly
after the reboot, though, I was prompted to apply more updates. This probably
happened about a half-dozen times before the machine was fully up-to-date with
the latest patches.

Granted, an end user isn’t going to be running Windows
Server 2003 on their desktop, but the concept is still the same. As more and
more updates become available for Windows Vista, it may eventually get to the
point where end users are prompted to reboot new machines multiple times before
all of the latest updates are installed.

Having a machine constantly prompt end users to apply
updates isn’t really as much of a problem as it is an annoyance. What is a
problem is that the majority of the released updates are security related. A
new machine is left vulnerable to the various security holes until the related
patch is applied.

This is where OS packages come into play. OS packages allow
you to incorporate patches into the deployment images that you create. Patches
are just the beginning; OS packages can consist of patches, service packs, or
even language packs.

The process of adding an OS package to a deployment image is
very similar to that of adding a device driver. To do so, navigate through BDD
2007’s console tree to Distribution Share | OS Packages. The OS Packages
container should initially be empty. Now, right-click on the OS Packages
container, and select the New command from the resulting shortcut menu. When
you do, Windows will launch the New Package Wizard, as shown in Figure D. 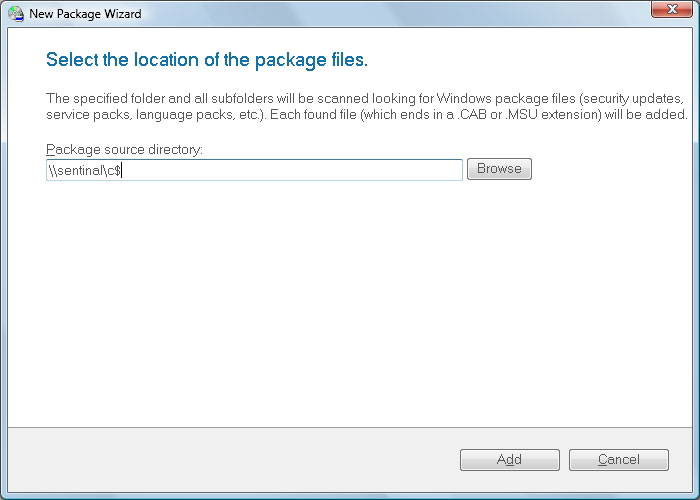 You must provide the
path to your OS package files.

Most importantly, know that you cannot just download a
Windows Vista patch from the Microsoft Web site and expect to be able to apply
the patch as an OS package. When you manually download a patch from Microsoft,
the patch is almost always an EXE or MSI file. The New Package Wizard does not
support these file types. You can only use files that are in CAB or MSU format.

The easiest way to get files that are in the correct format
is to copy them from your WSUS server. The current version of WSUS stores patch
files in the \WSUS\Wsuscontent
folder, in a series of subdirectories with hexadecimal names. You can copy the
desired folders directly to the machine that is running BDD 2007. Another
option is to simply provide a direct path to your WSUS server. For example, the
name of my WSUS server is Sentinel, so I entered \\Sentinel\C$ as the path to the OS
package files. The server contains OS package files for other operating systems
as well, but BDD 2007 ignores the files that it can’t use. For example, Figure
E shows the results of scanning an entire WSUS server. 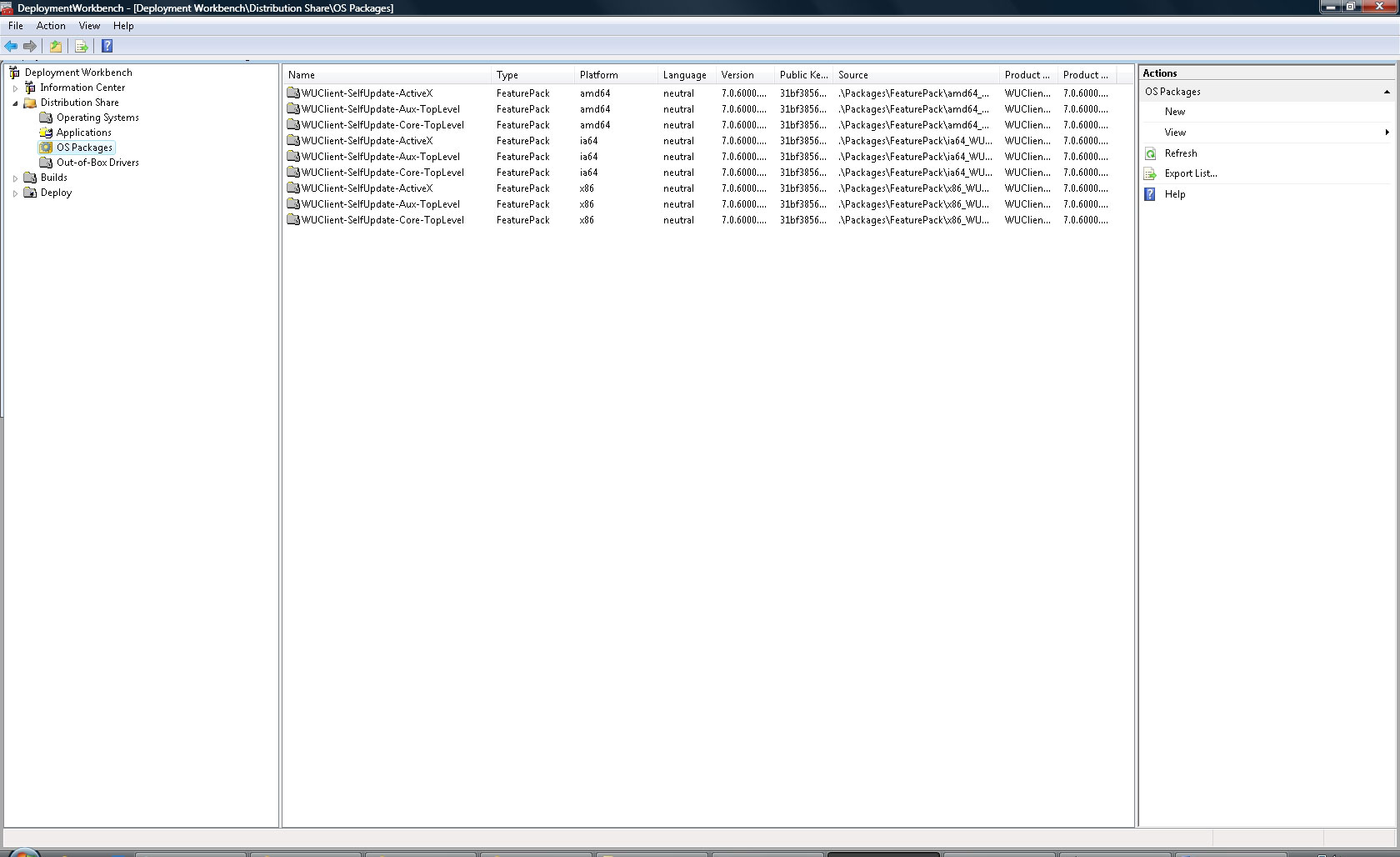 You can pull OS
package files directly from your WSUS server.

Now that you have provided operating system source files,
applications, drivers, and OS packages, you have most of the components in
place that you will need for deploying Vista. Right now though, all of the
files that you have provided to BDD 2007 all exist as separate entities. You
must now create a build that will pull these various resources together.

Begin the process by right clicking on the Builds container
found in the console tree, and selecting the New command from the resulting
shortcut menu. When you do, Windows will display the New Build Wizard, as shown
in Figure F. 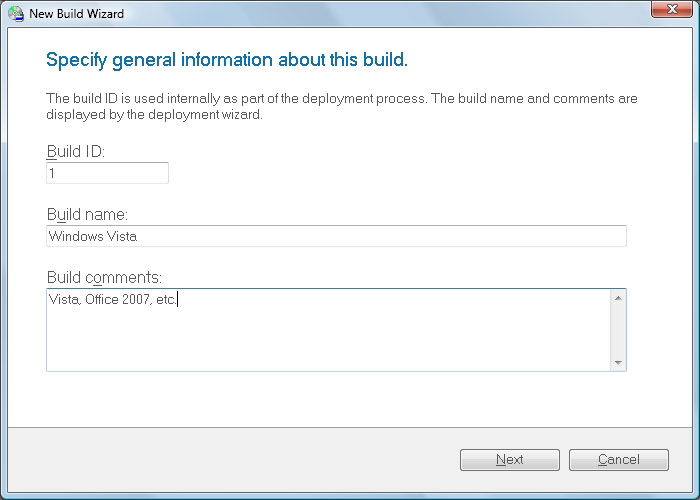 The New Build Wizard
allows you to create a Vista build.

As you can see in the figure, the wizard’s initial screen
just asks you for some basic information that you can use to identify the
build. You can enter pretty much anything you want into these fields. Press
Next and the wizard will prompt you as to what OS you want to install.
Obviously, you will be deploying Windows Vista, but there are many different
editions of Windows Vista, as shown in Figure G. 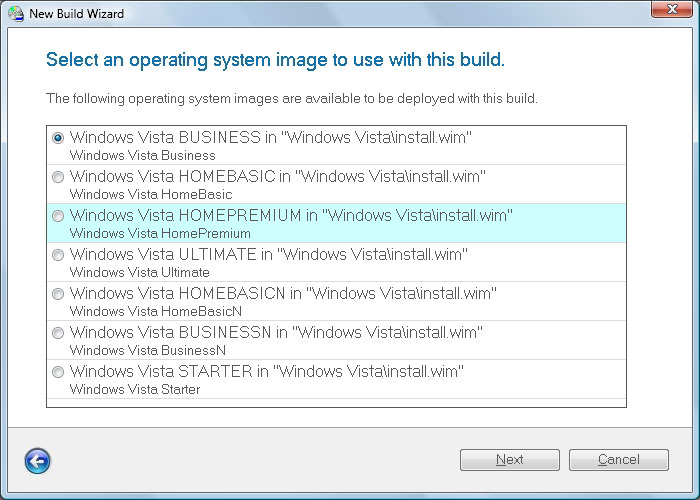 You must select the
edition of Windows Vista to be included in the build.

Press Next and the wizard will prompt you for a product key,
as shown in Figure H. If you will be using Windows Vista volume
licensing, or a key management server, you don’t have to enter a product key. 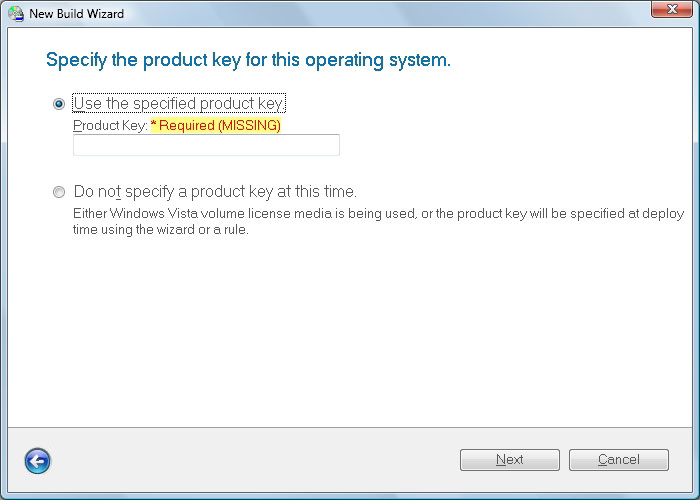 You are given the
option of entering a product key.

Press Next and the wizard will begin prompting you to enter
information required by Windows Setup. You are prompted to enter a full name,
organization name, and the home page that Internet Explorer should default to.

After entering this information, press Next, and you will be
prompted to enter a local administrator’s password. Since the password will be
stored in an XML file, you have the option of providing the password during the
deployment should you choose. Keep in mind that having to manually enter a
password partially defeats the purpose of automating the installation process,
however.

Finally, press the Create button, and the new build will be
created. As you can see in Figure I, the new build is listed in the Details
pane when the Builds container is selected. 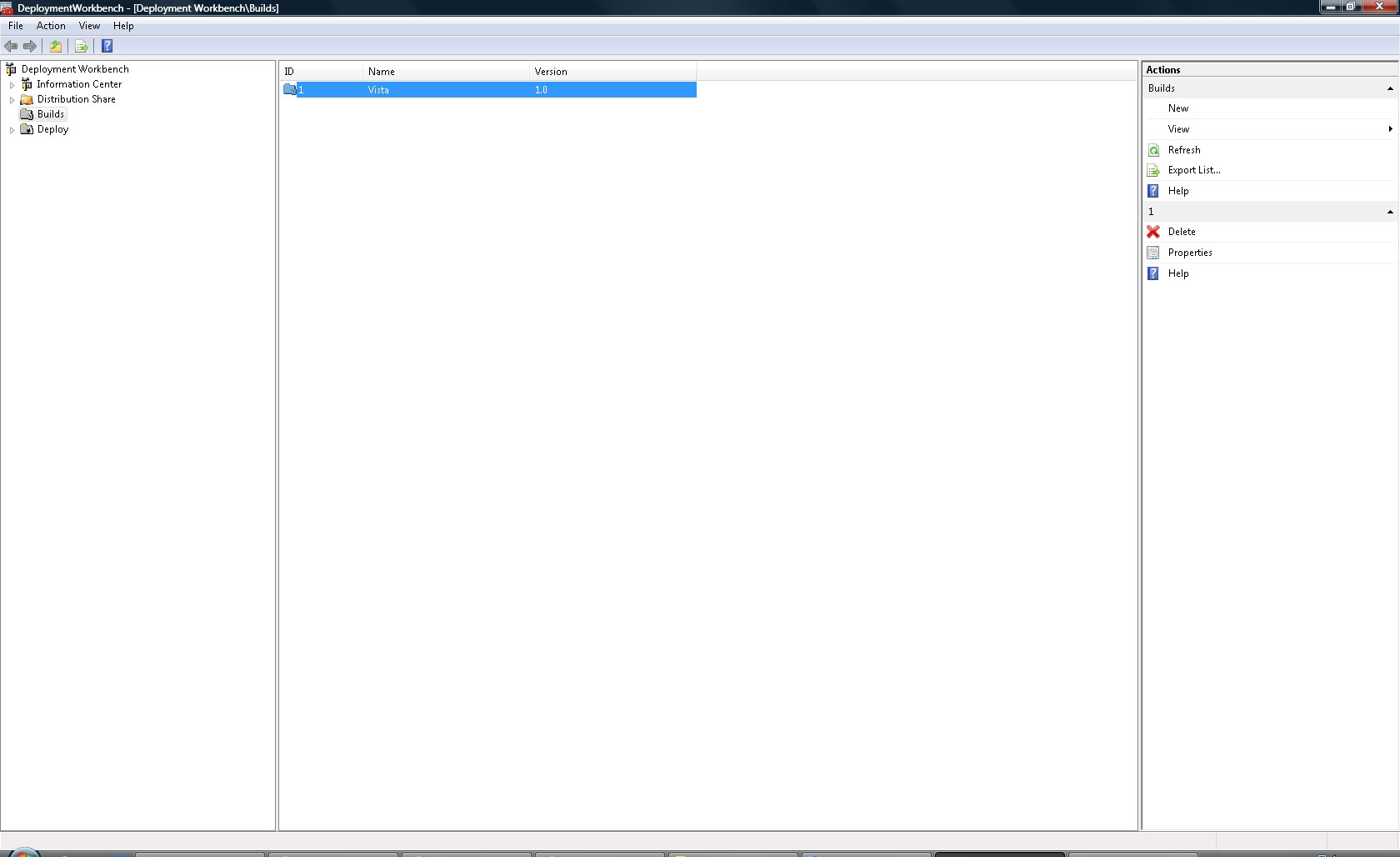 The new build is
listed in the Details pane. 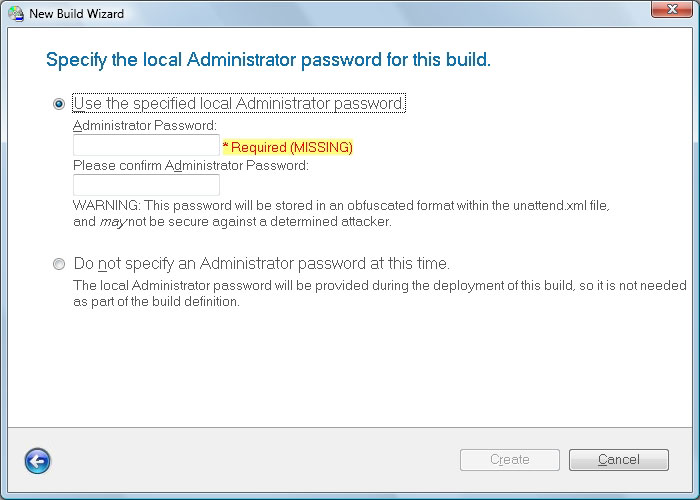 You can alter the
build’s settings from the build’s properties sheet.

In this article series, I have shown you how to use the
Business Desktop Deployment 2007 tool to create a Windows Vista deployment
image. I will be discussing the deployment process in a separate article.

Share: SolutionBase: Customize a Vista deployment image
By Brien Posey
* 1988 - Started teaching myself about computers \ * 1992 - Mainframe programmer for an insurance company \ * 1993 - Network Administrator for a different insurance company \ * 1996 - Author for The Cobb Group \ * 1998 - Network Administrator for Fort Knox \ * 1999 - CIO for chain of hospitals \ * 2000 - Gave up the corporate rat race to work out of my home. I have been a full time technical author ever since. Visit my Web sites at http://www.brienposey.com and http://www.relevanttechnologies.com \