SolutionBase: Getting to know GNOME

Linux has come a long way from the early, oft-crashing days. GNOME is now one of the primary desktops for the Linux operating system; not only is it highly customizable, but it is amazingly stable. Jack Wallen explains why Linux -- running GNOME -- is a viable desktop alternative.

I was present at the very first unveiling of GNOME at the
Linux Expo at Duke University; it was pretty amazing at the time to see a new Linux
desktop. This was version .30; as of this writing, GNOME is at 2.18.1. It has come a long way from the early, oft-crashing days. Even though GNOME doesn’t have the same look and feel as it did in its early,
ground-breaking days, GNOME is now one of the primary desktops for the Linux
operating system. If you’ve never given GNOME a try, I’m confident that you
will after reading this article.

For the purposes of this article, I’ll be
running GNOME from a fresh install of Ubuntu 7.0.4 (Feisty Fawn) with the
following hardware specs:

Obviously, this machine is no powerhouse, but
GNOME is as snappier than any Windows install that has been on the same
machine.

If you’re of the 95 percent
of the world that uses Windows, you know what a GUI is, but because you’re
running Windows, you’re stuck with only one — the GUI Microsoft forces you to use.
In the Linux world, you can choose pretty much any GUI for your desktop. GNOME
is one of the most popular desktops available, although you’ve probably heard
of other ones such as KDE or Enlightenment.

GNOME is the default GUI
for most of the major Linux distributions, including Red Hat, SuSE, and Ubuntu. Even if your chosen distribution doesn’t
natively come with GNOME, you can easily install it. It rides on top of the
Linux X Windows services, so almost any product that uses X can run GNOME.

If your distribution uses
KDE or another window manager by default, you can switch to GNOME by simply
logging off. When the login screen appears, select Session and then GNOME; then,
log in as normal. You’ll get the default GNOME screen, just like other Linux
users.

Take a look at Figure A: this is the default GNOME desktop
(with a few minimized windows). The layout is simple: At the bottom of the
screen, you’ll see a GNOME panel configured to serve primarily as a window list
where minimized windows can live. You will also see the Show Desktop button,
the Workspace Switcher, and the Trashcan. At the top of the desktop, you will
see another GNOME panel configured to serve as an application launcher, menu
system, and system tray. 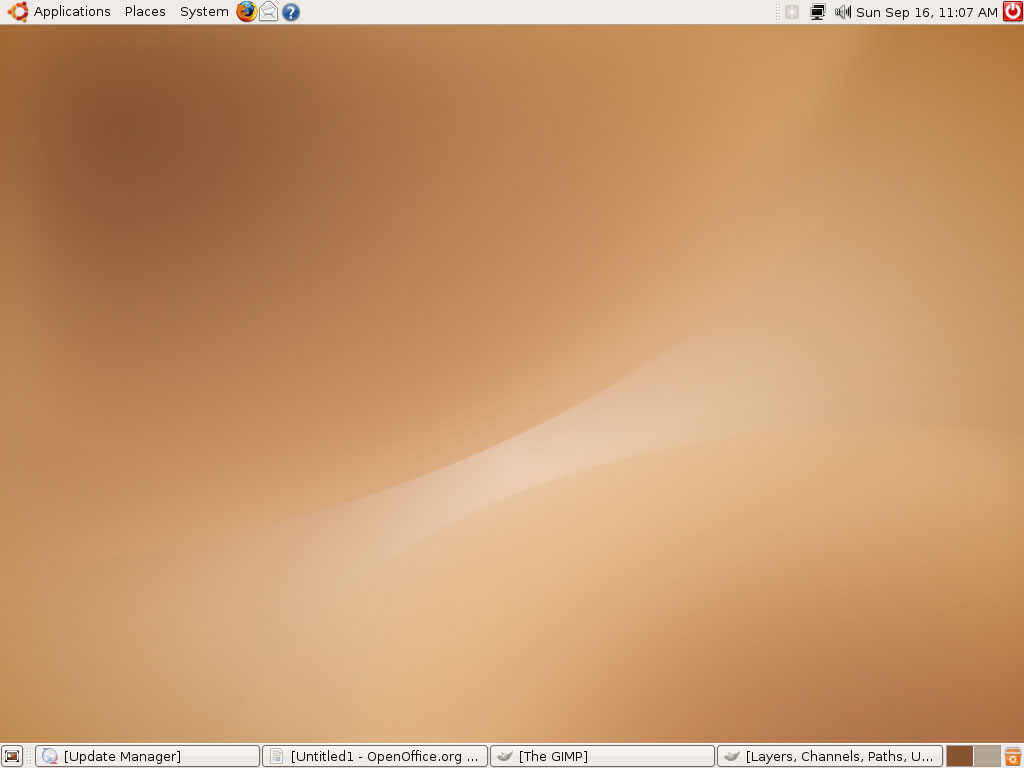 This default desktop is
somewhat reminiscent of the Apple desktop, but much more configurable.

Let’s take a look at the GNOME panel. I’ll show
you how it’s configured.

The GNOME panel is, for the most part, a typical
panel application. You can add items to the panel, configure, remove, and even
report problems with the panel. All of these actions are done via a right-mouse
click on the panel. When you right-click the panel, you’ll see a new menu open,
as shown in Figure B. 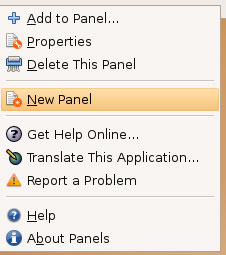 Ensure you click on an
empty space in the panel to get this menu.

Let’s take a look at the properties of the
panel. Select Properties from the Panel configuration menu. The Panel
Properties window allows you to configure the look, location, and action of the
panel.

Suppose you want to configure your panel to be
transparent. You can do this by pressing the Background tab, selecting Solid
Color, and then sliding the Style slider all the way to the left. The changes
happen in real time, so there’s no need to preview or press an OK button. Figure
C shows the results of having a transparent panel. 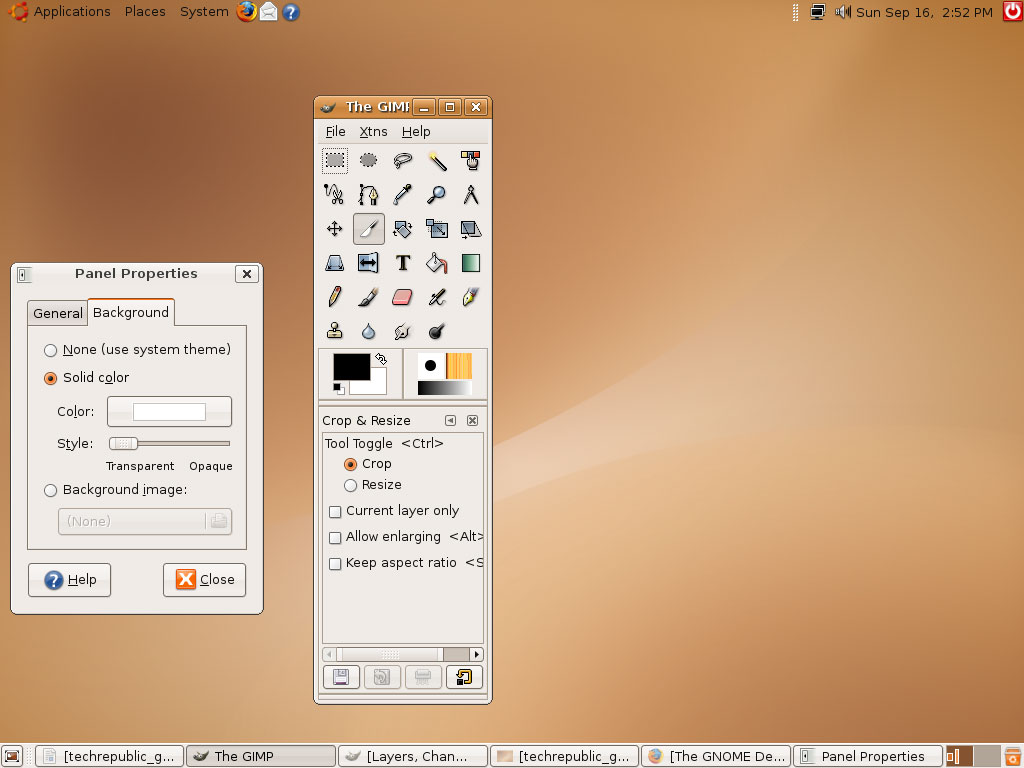 The panel is still there, right-click
on it to bring up the configuration menu.

From the General tab within the Panel Properties
window, you can also change the arrangement of the panel (Top, Right, Bottom, or
Left), change the size of the panel, or change the hiding options.

Now take a look at the bottom panel. You can
configure the bottom panel in the same manner you configured the top panel. The
only difference between these two panels is the applets added to each. You
could, effectively, create an identical panel on the bottom as you have on the
top. That is one of the most appealing aspects of GNOME — its configurability.
Granted, the GNOME developers assume their default setup is the most usable
setup.

There will be instances when screen real estate
might dictate only one panel on your desktop. This is simple:

The WindowList applet is now a part of the top
panel. Do the same for the Show Desktop button, the Switch Workspace applet,
and the Trashcan, and you have all of the default attributes in one panel.

You can also add application buttons to the
panel by pressing the Application Launcher button. Once in this window shown in
Figure D, navigate to the application you want to add and press the Add
button. 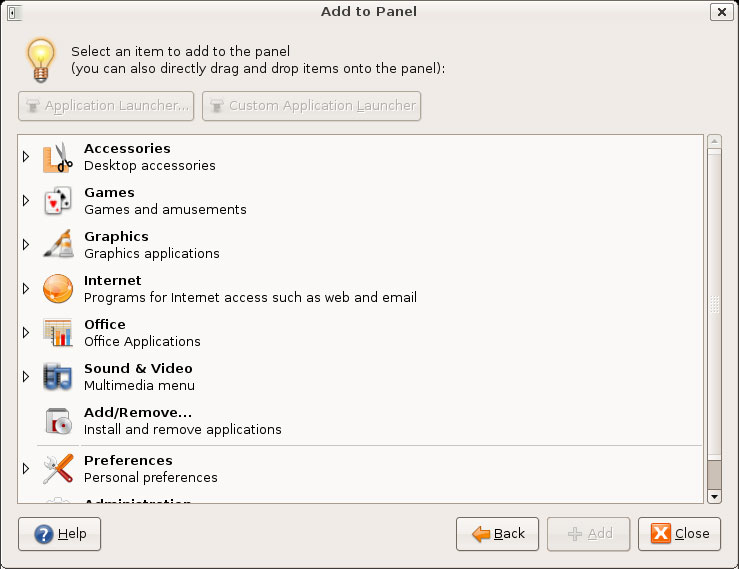 Press the arrow to expand
the categories to locate your application.

One of the first things you’ll notice about the
GNOME desktop is how clean it is. If you’re used to looking at a Windows XP desktop,
you expect to see My Computer, My Documents, and other icons. With GNOME, there
are no icons, but that’s easy to resolve. Right-click the desktop to reveal the
only desktop menu available, shown in Figure E. Select Create Launcher
from that list. 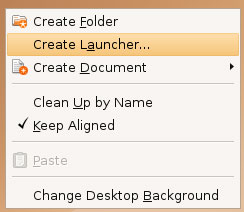 This same menu is where you
would line up your desktop icons once they are created.

Figure
F shows what this looks like in the Create Launcher window. 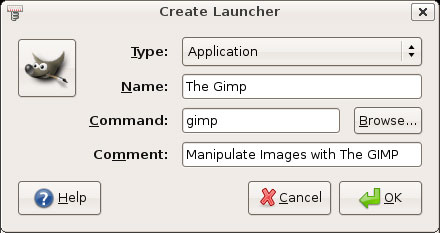 You could use the browse
button to find the application you want to associate with your icon.

Once your icon is complete, it will appear on
your desktop.

There are a number of applications unique to
GNOME; one such application is the Nautilus file browser, shown in Figure G.
Although this browser is not nearly as powerful as KDE’s Konqueror
browser, it does have its benefits. 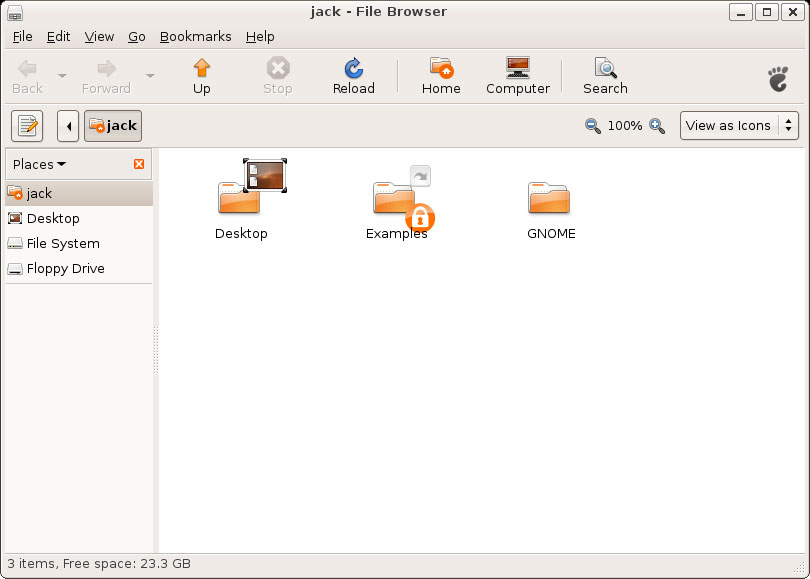 It will take a while to
discover all of the nifty options available with this file browser.

One of the best options available to Nautilus is
the ease of burning CDs: Much like OS X’s ability in iTunes, simply drop your
items into the Burn folder and press the Write to Disk button. There are two
ways to do this. The first — and more troublesome — way is to open a second
instance of Nautilus. On the first instance of Nautilus, select the Go menu
(from the top) and then select your CD (or DVD) burner. You will now have a
Nautilus instance open for burning. Now go to the second Nautilus instance and
navigate to the folders you want to burn. Drag-and-drop those folders to the
other instance of Nautilus in the Burn window. Now, with a writeable CD (or
DVD) in the drive, select Write To Disk to burn the
disk.

There is an easier way: Open up an instance of
Nautilus and open the burn window; navigate to the files you want to burn (via
the tree view in the left pane); right-click the file (or folder) you want to
burn and select Copy; right-click in the Burn window and select Paste; and select
Write To Disk to burn the disk. You are effectively doing the same thing, but
are bypassing the need to have the second instance of Nautilus open.

Here’s a brief description of other GNOME
packages:

You probably like to customize your GUI
environment to fit your aesthetic needs. You can do this easily with GNOME, and
will have more options than a Windows user.

Select the System menu (from the Panel) and then
select Preferences. From the Preferences menu, select Theme, which
opens the Theme Preferences window, as shown in Figure H. 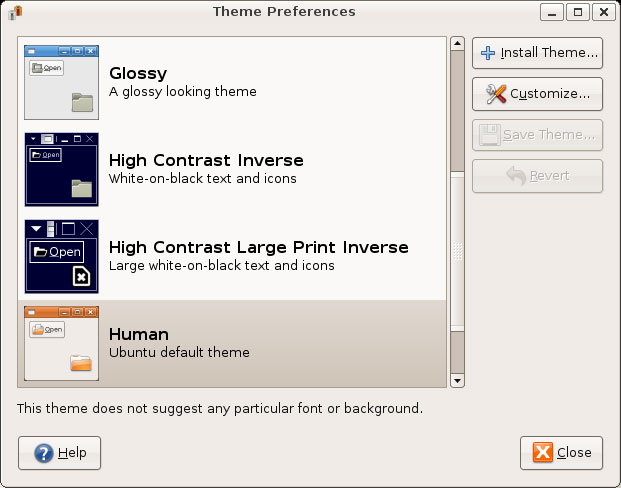 To install a new theme, go to the official GNOME Theme site, download a theme,
and drag it into the Theme preferences window. Once the theme is installed, it
will appear at the top of the list and be labeled Custom Theme. Save that theme
— and rename it — by pressing the Save Theme button. You can then go in and
customize to your heart’s content.

GNOME is one of the best Linux GUIs; not only is
it highly customizable, but it is amazingly stable. The widgets are stable and
fast, the applications are robust and user friendly, and configuration couldn’t
be easier. So if you’re using the Linux operating system, or just trying to
decide if the Linux OS desktop is for you, give GNOME a try; it just might sell
you on Linux as a viable desktop alternative.

Share: SolutionBase: Getting to know GNOME
By Jack Wallen
Jack Wallen is an award-winning writer for TechRepublic, The New Stack, and Linux New Media. He's covered a variety of topics for over twenty years and is an avid promoter of open source. For more news about Jack Wallen, visit his website jackwallen.com.