If fear of a windowless environment has kept you from running Linux, KDE may be your answer. Jack Wallen explains what you'll find running a windowing environment such as KDE on your Linux workstation.

It’s the same metaphor, layout, and methods; the biggest
difference is the underlying system, which the average user never sees. Still,
people seem to fear change. I’m going to alleviate those fears by showing you
what you’ll find running a windowing environment such as KDE on your Linux
workstation.

For the purposes of this article, I’ve installed
a fresh version of Kubuntu 7.04 (Feisty Fawn), The
Gimp, and OpenOffice on my test workstation. I’ve also
run full updates (using Synaptic), but that’s it. Little configuration has been
done outside of a few window behaviors that better suit my working style.

It doesn’t matter what distribution of Linux you’re
running KDE on. KDE pretty much works the same no matter what version of Linux
is underneath the surface.

The system I’m working on contains the following
specs:

It isn’t spectacular and is somewhat out-of-date,
but is up to par with what many businesses would still be running on a desktop.

A quick look around

By default, Linux doesn’t boot into a graphical
environment. Operating systems that do often boot into GNOME. However, if
you log off of a GNOME session, you can switch into KDE by making a selection
from the Session menu. When KDE starts, you’ll see a desktop like the one shown
in Figure A. 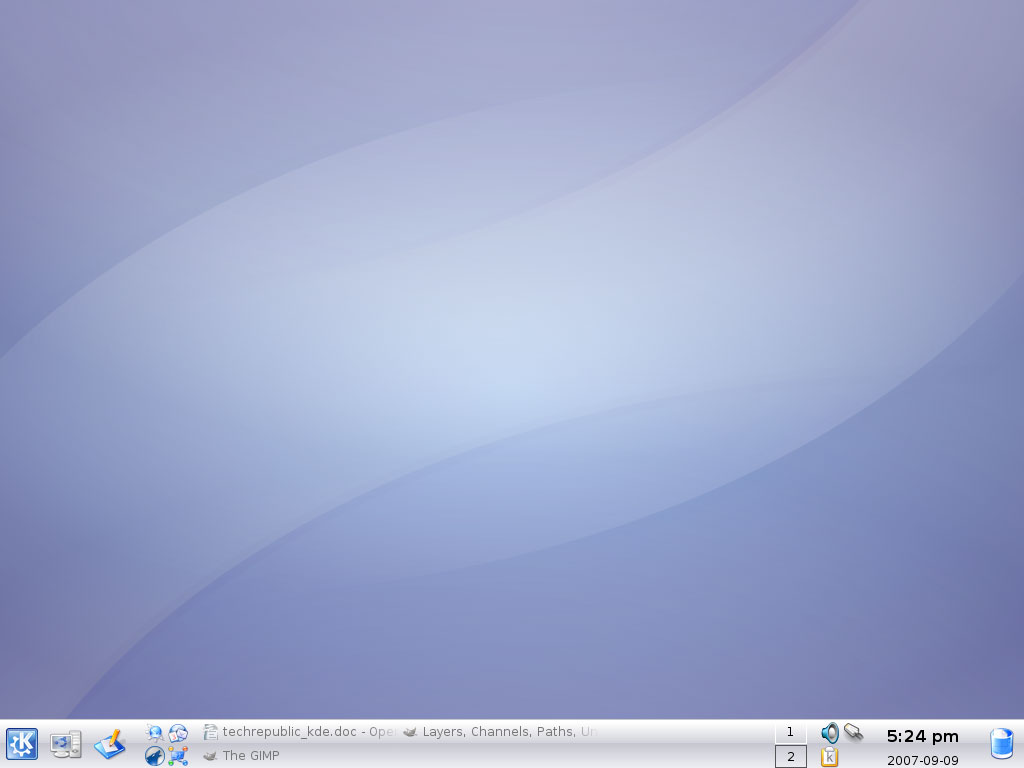 What you see is a standard desktop. It’s very
basic, clean, and very similar to those desktops of the Windows operating
systems. At the bottom is the Panel, where you’ll see these items: 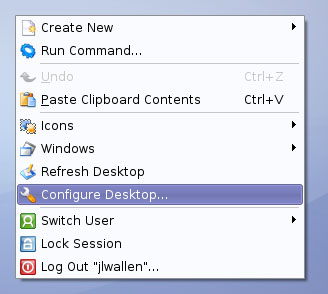 From this menu you
will also create clickable icons (more on that later.)

The resulting new window, shown in Figure C,
is where you will configure the look and feel of your desktop. 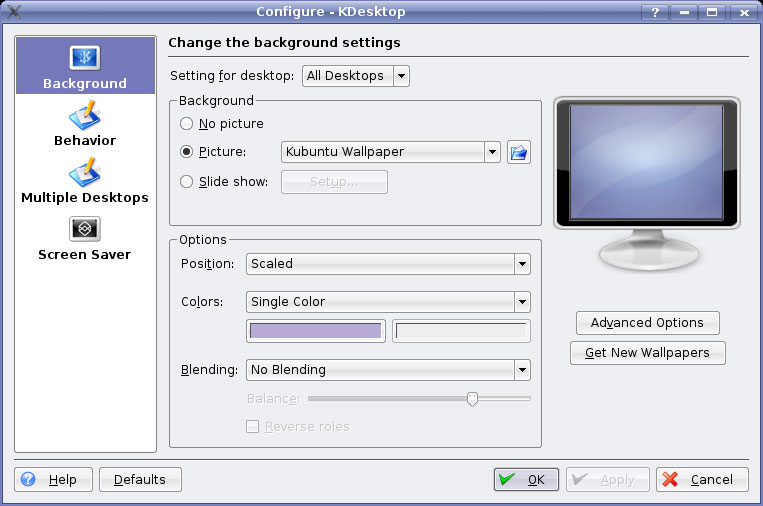 You can add items and behaviors that can enhance
the desktop experience by pressing the Behavior button. From this section, seen
in Figure D, you can add a Menu Bar, edit the action of the mouse buttons,
and configure Icons to show for various file types and device types. 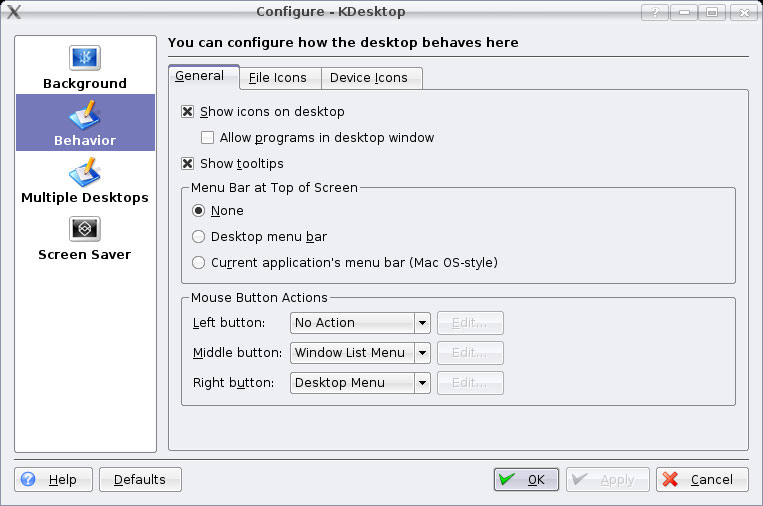 You can create your
own mouse menu by selecting Custom 1 or Custom 2 from the Mouse Button Action
drop down lists and selecting Edit.

Suppose you want to configure the Desktop
background; there are some interesting tricks for this. Go back to the Configure
Desktop window and press the Background button. In the Change The Background window, you’ll see a few things that vary
from the Windows wallpaper configuration.

The first thing you’ll see is the drop-down for
which desktop you want your settings to apply to. If you click the drop down
you will see that you can apply the settings to either All
Desktops, Desktop 1, or Desktop 2. This setting refers to the Pager which we
will discuss momentarily.

If you click on Advanced
options you can configure KDE to use the kwebdesktop
application to download various images from the web. If you select Get New
Wallpapers, you can download various wallpapers from kde-look.org.

The pager is a desktop metaphor that has been
with Linux for quite some time. Effectively, this system allows you to have far
more screen real estate than you would normally have. Suppose in your office,
you have two desks. On one desk, you do all of your bookkeeping chores; on
another desk, you do all of your face-to-face chores. Having two desks keeps
various paper work and jobs from getting confused with one another and it gives
you far more space to work; that is how the pager works.

By default, the KDE desktop gives you two
pagers: Desktop 1 and Desktop 2. You can have as many as twenty desktops.

To configure multiple desktops, you’ll make
changes in the Desktop properties screen. In the Desktop Properties window, press
the Multiple Desktops button. You can take care of three configurations:

Naming the desktops is actually quite helpful.
Most times I will name each desktop with the work I will be undertaking on that
desktop. So, I will often have a desktop named Writing, another named Network,
one named Graphics, and still another named System.

Let’s move on from the Desktop and head toward the
item that will be most familiar to the Windows user: the Panel. Sometimes
referred to as the Kicker, the Panel will be the place from where many of your
applications will be launched as well as where they are minimized. The panel
is, to many, the heart of the desktop.

The Panel is a simple bar that runs across the
bottom of your screen; it can also be set up to run on the sides or the top. The
Panel can be highly configured: You can add applets and icons to it and change
the look and feel of it.

Configuring the Panel is simple: Right-click
anywhere on the Panel that doesn’t house an icon, tray, menu, or minimized
application. When you right-click the Panel, you will see a menu appear, as
shown in Figure E. 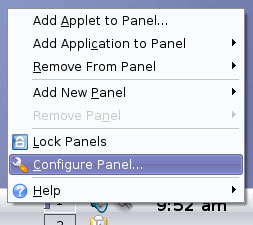 Not only can you
configure the existing panel, but you can add and remove panels as well. 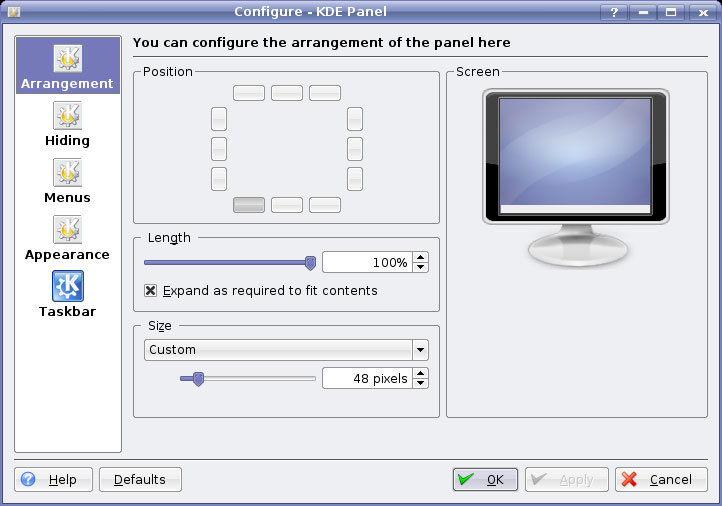 There are quite a few
options to take care of here.

As in Windows, you can set up your panel to auto-hide,
consequently giving yourself even more screen real estate. One aspect of panel
hiding that differs from Windows is the hiding buttons. If you enable the panel-hiding
buttons, as shown in Figure G below, you will see a small arrow pointing
in the direction the Panel will move. You can configure the Panel to hide to
the left or right. 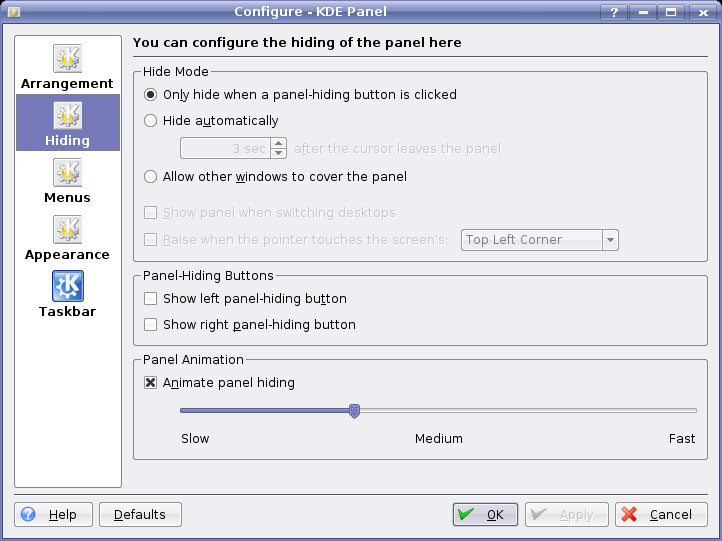 You can enable both
buttons to slide the panel either way.

Once you’ve hidden it, you can bring the Panel
back by pressing the arrow once again. Of course, with the panel hidden, how do
you get to your minimized applications? Simply press the middle mouse button
(probably the mouse wheel). The resulting menu — the Window List — is shown
in Figure H.

This is a simple way
to bring back your applications.

The window list is simply a clickable listing of
the applications currently running. Even if an application is minimized, you
can bring said application to the desktop by selecting it from the Window List.

You can also add more pagers to the desktop.
There are five different types of panels you can add:

External
Taskbar: A bar that can take the place of the taskbar
on the Panel so that there can be more room for minimized windows.

Kasbar: A
replacement for the KDE panel with a totally different look and feel.

Universal
Sidebar: This is a similar sidebar that used to belong
to Konqueror. It holds clickable icons for applications, bookmarks,
directories, and networks.

The Kasbar is a very interesting tool that
hearkens back to the look and feel of Next (or AfterStep). Take a look at Figure
I; it illustrates one
way the Kasbar is used. As you can see, I hovered over the minimized icon for OpenOffice, and a thumbnail of the window appeared. 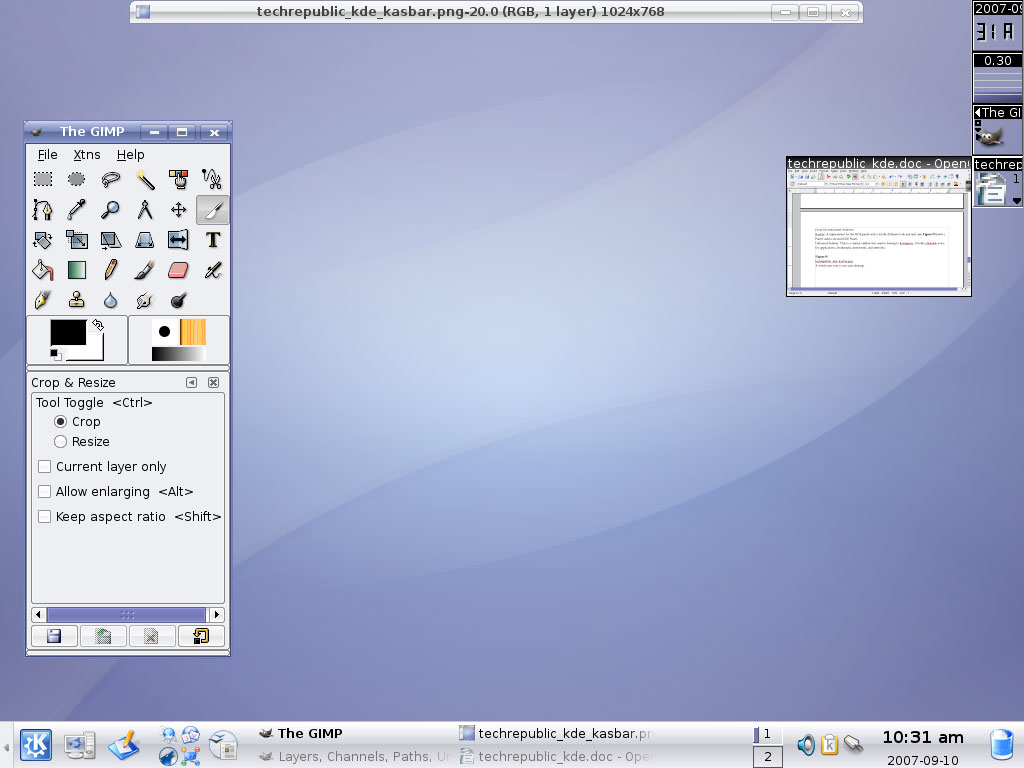 Click on the Kasbar
minimized icon and the window will appear.

Although the Kasbar is a neat take on some
old-school ways, it probably won’t have much of a place with your users
migrating from Windows.

The system tray, shown in Figure J, is
exactly what you would think it to be. Here you will find tiny applets that
offer up system information or tools. By default, KDE has the Sound Applet, the
Klipper (the copy tool), and the KNetworkManager applet. These applets are the
only available applets by default. There are certain applications (such as the
personal time tracker KArm) which, when minimized, will go directly to the
system tray.

If you press the left
mouse button on any of the three applets shown, a menu will appear.

The clock is not really a part of the system
tray, but just an applet on its own. As with any of the panel applets, you can
move the clock by hovering your mouse on the left edge of the clock until you
see the vertical bar and arrow appear.

Most users wouldn’t know what to do without
Desktop Icons. By default, KDE doesn’t have any desktop icons. Creating icons
is very simple: Right-click the desktop and select Create New. From the Create
New menu select Link To Application. Once this entry
is selected, a new window (Figure K) will appear that will allow you to
create the necessary icon. The one possible drawback is that you will have to
know the location of the command to run (or the name of the command, which must
be in your user’s $PATH.)

Ensure you press the
icon button (the button with the blue gear) in order to give the icon a unique
graphic for the application icon.

There is, of course, another way to create a
desktop icon. Select the System menu (located in the Panel to the right of the
K Menu) and select Home Folder. The Konqueror browser will appear in the users home directory. Select the small red Root Folder icon
to place the browser in the / directory. Navigate to /usr/bin and locate
the application you want to add the icon for.

Click and drag the icon to the desktop and an
icon will appear. The only change you will have to make is to right-click the
icon, select Properties, and edit the icon button so you won’t have a desktop
full of blue gears. Once the icons are created, they will all be single-click
icons.

KDE shares so much familiarity to Windows. Some
feel as if this was done intentionally because Microsoft just got the desktop
metaphor right. Some, on the other hand, feel as if it was done because it was
what users were accustomed to. At any rate, KDE did do many things correctly,
and your users will feel right at home using the KDE GUI.

Share: SolutionBase: ‘Konquering’ the desktop with KDE
By Jack Wallen
Jack Wallen is an award-winning writer for TechRepublic, The New Stack, and Linux New Media. He's covered a variety of topics for over twenty years and is an avid promoter of open source. For more news about Jack Wallen, visit his website jackwallen.com.