Sometimes individual office application alternatives are better suited for the actual job than the mighty giants. In these instances, you can find word processors not so insistent upon gulping up massive amounts of memory, space, or budget; you might even find those "little apps that could" do their job just as they should. Jack Wallen introduces two such word processors: AbiWord and KWord.

In the arena of office application
suites, you know all about the big two: Microsoft Office and OpenOffice.org.
Integrated suites of applications became all the rage in the ’90s, when the
Windows 3.1 version of Microsoft Office cleared the completion of standalone
products such as WordPerfect, Lotus 123, and dBase.

Although the issue may seem settled,
if you dig deep enough, you can find individual alternatives that are, in some
cases, better suited for the actual job than the mighty giants. In these
instances, you can find word processors not so insistent upon gulping up
massive amounts of memory, space, or budget; you might even find those
“little apps that could” do their job just as they should.

At one time, AbiWord was positioned
to become the word processing software for a planed GNOME office suite. When it
became clear that OpenOffice.org had taken that title, AbiWord kept working
hard to become the best stand-alone word processor it could be.

KOffice is exactly what it sounds
like: The KDE Office suite. Among that office suite are numerous
tools — more
so than are included in MS Office — among which is KWord. KWord is
another outstanding tool that does exactly as you would expect it to; it allows
you to write words.

With the above introductions in
mind, let’s take a closer look at each.

To better understand where we’re
starting from, let’s examine our environment. I will be running on an older
installation of Fedora (FC6). The processor is an AMD 64 bit (running in 32 bit
mode), with 1 GB of RAM. My test machine doesn’t warrant using tools with
smaller requirements, but I would be remiss in saying that both word processors
(especially AbiWord) excel in the area of bringing new life to older machines.

The desktop you’re using doesn’t
matter with either tool; even if not running KDE, you can still run KOffice.
You will, however, have to have KDE installed before you can install KOffice.
My desktop of choice is Enlightenment.

Although KWord is a part of the
KOffice suite, I will only deal with KWord (not the entire suite of tools).

Once the package is installed, start
AbiWord one of two ways: run the command abiword, or select AbiWord from
the Office menu of either KDE or GNOME, as shown in Figure A. 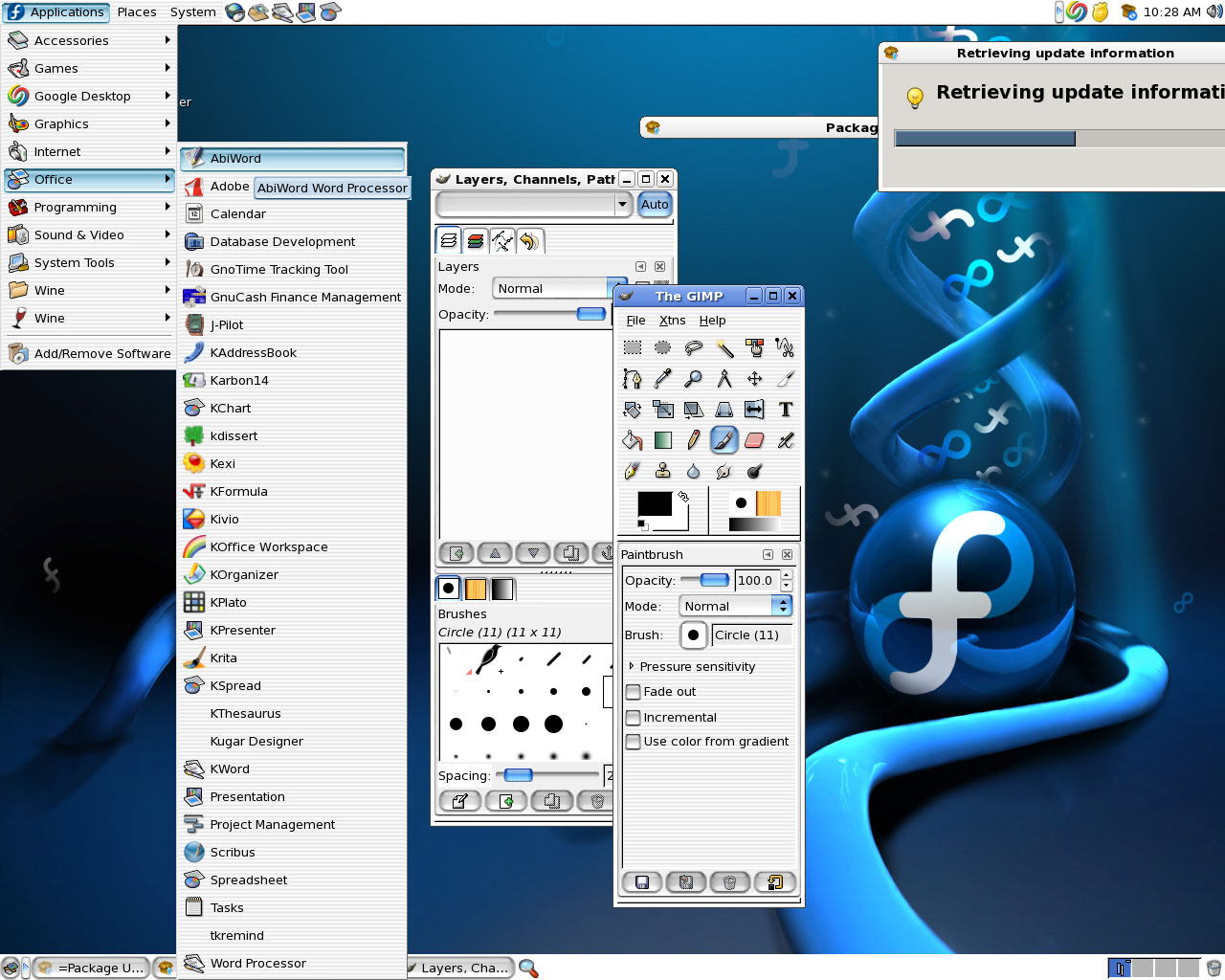 When you start AbiWord what you will
see might surprise you; it looks pretty much like every other word processing
software out there. The UI is standard, clean, and simple to use. Take a look
at Figure B; minus the LCARS Enlightenment theme, you will see nothing
out of the ordinary. If fact, I would venture to say the learning curve with AbiWord
is probably the lowest of all the word processing software packages available. 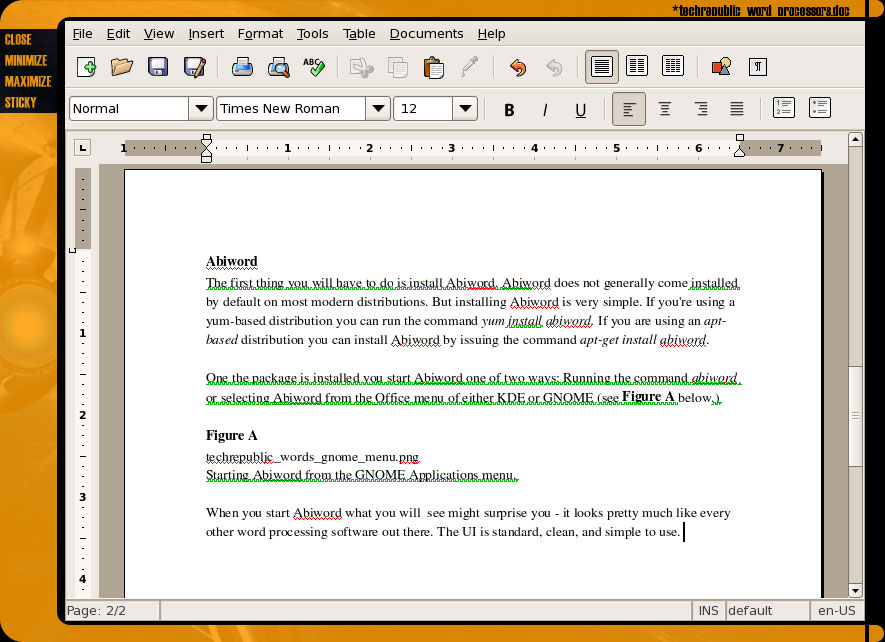 Instead of running the gamut of more
obvious tools, I thought it best to highlight some of the tools unique to AbiWord.
There aren’t many of them, but those that are available are really quite nice.

The first is the Babelfish
translation tool. Many of you have probably already used AltaVista’s Babelfish
translation site. Well, if you are using AbiWord and you write a word you need
translated, highlight the word, select Use Babelfish Translation from
the Tools menu, and a new window will appear, as shown in Figure C, prompting you to select a
language to translate. 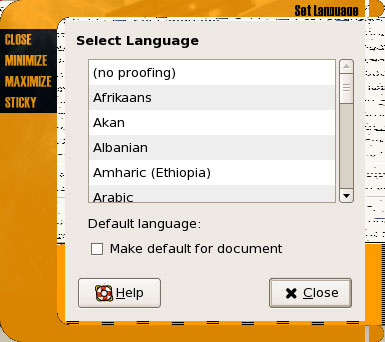 Finally, a browser window will open
to the Babelfish site with your translation in place. You can do the same thing
with the Free Translation site.

The Wikipedia plug-in is a similar
tool. Highlight the text you want to reference and select the Wikipedia Encyclopedia
entry from the Tools menu; a new browser window will display the Wikipedia
entry for whatever it was you were referencing.

Another interesting feature is the
Views. In AbiWord, you can view your document in four different views: Normal
layout, Web layout, Print layout, or in a Web browser. Let’s take a look at the
differences.

Figure D
illustrates our document shown in the Normal layout. This is an old-school
layout format; notice the page break indicator, no rulers, and no gray-space
indicating outside of the page boundaries. 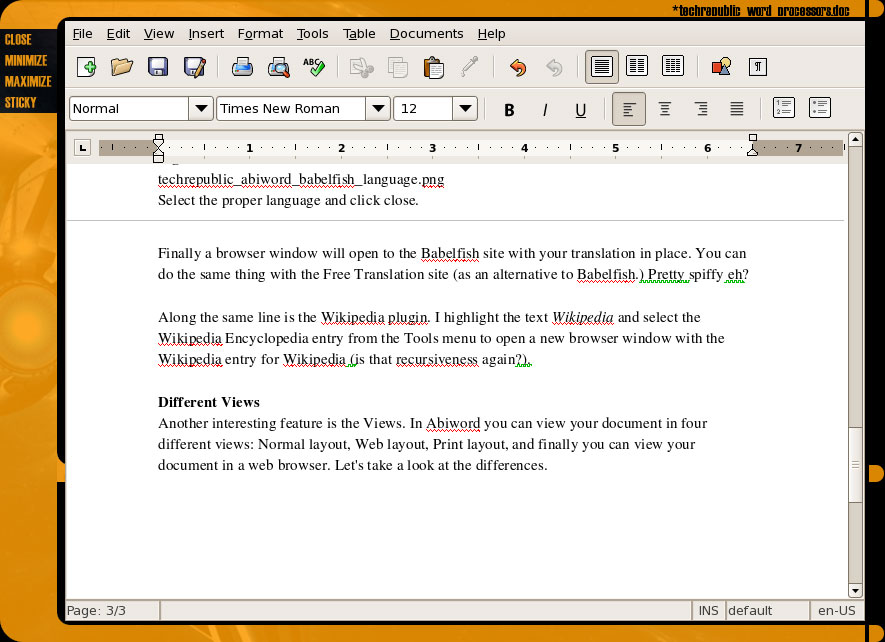 This layout brings me
back to the days of WordPerfect.

Figure E
shows the Print layout. This is the layout that most have grown accustomed to
in modern-day word processors. 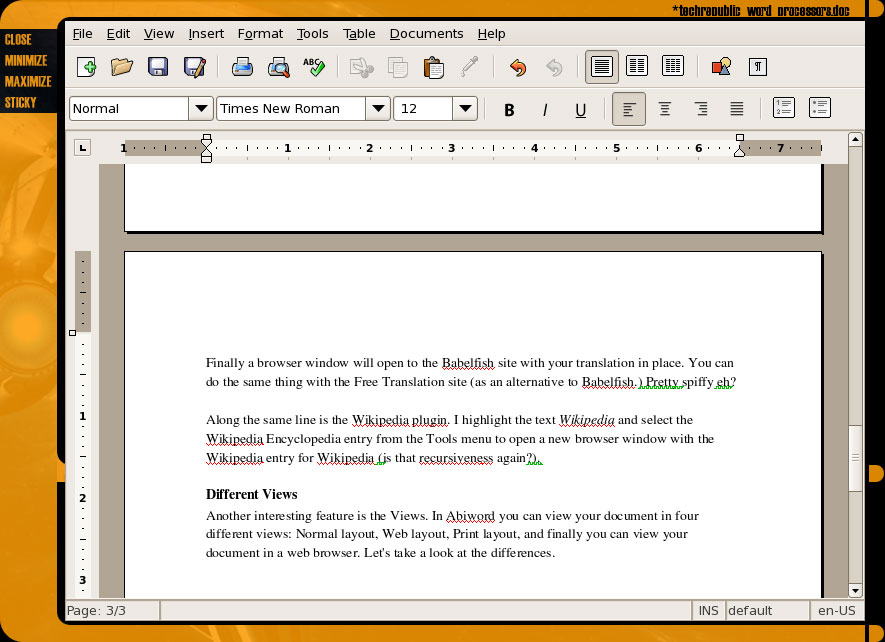 Now the layout looks
exactly as the printed page will look.

There are two ways to view your
document as if it were a Web page. From the View menu, select Web Layout to see
how the page will look as a Web page in AbiWord. You’ll then see the screen
shown in Figure F. 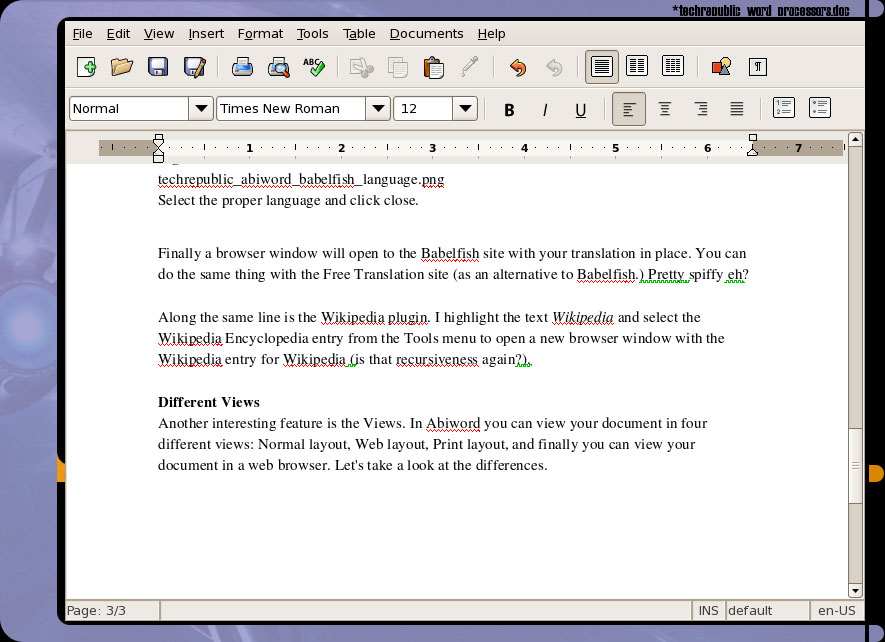 This view is somewhat
deceiving because paragraph breaks will not appear with double spacing in the Web
browser.

To get the full effect of the Web
browser view, you have to actually go to In Web Browser from the View menu.
When you select this, you’ll be asked to make a couple of selections, as shown
in Figure G. 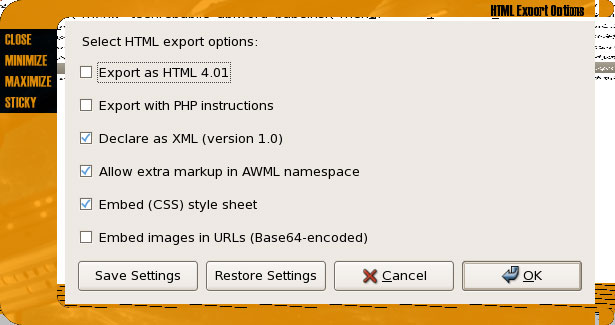 There are just a few
selections to make, but these selections will effect how the rendering will
appear.

Figure H
shows just how the document looks in a browser. As you can see, the page breaks
are single spaces, the bold text does come out as bold, and the hyperlinks
created in AbiWord actually do work. 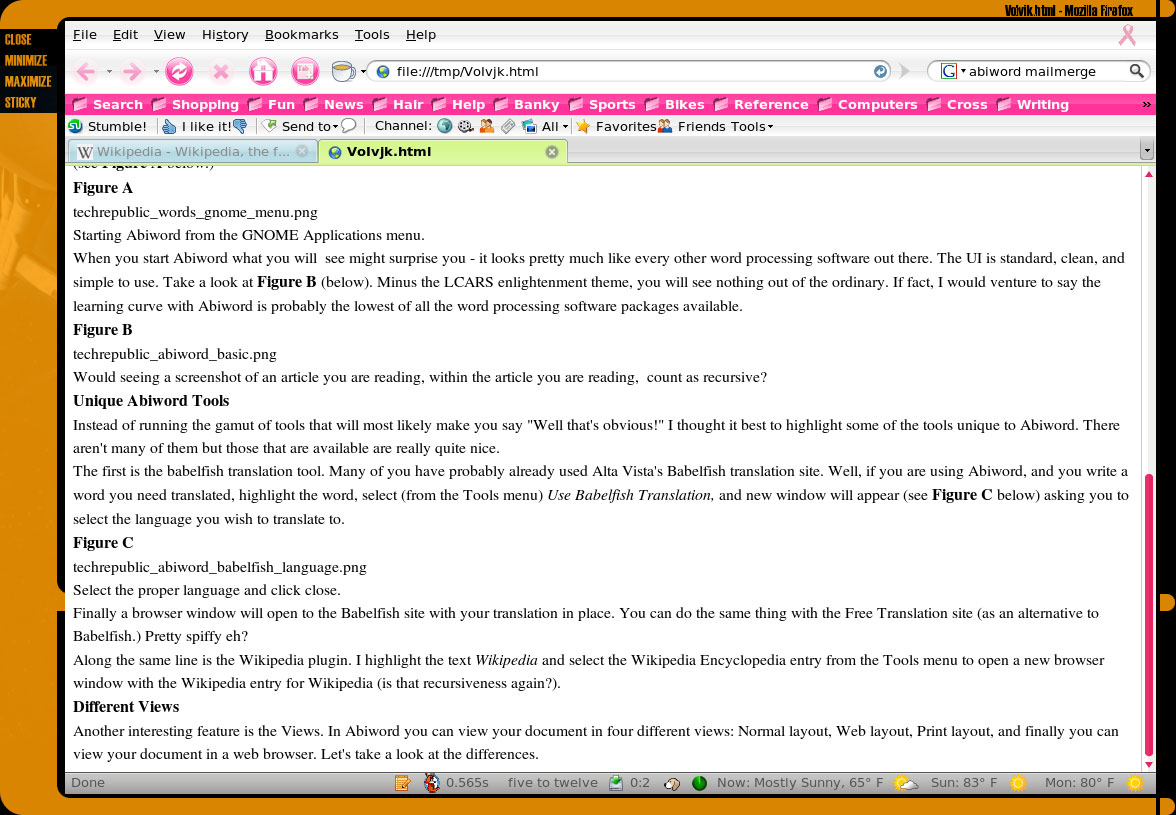 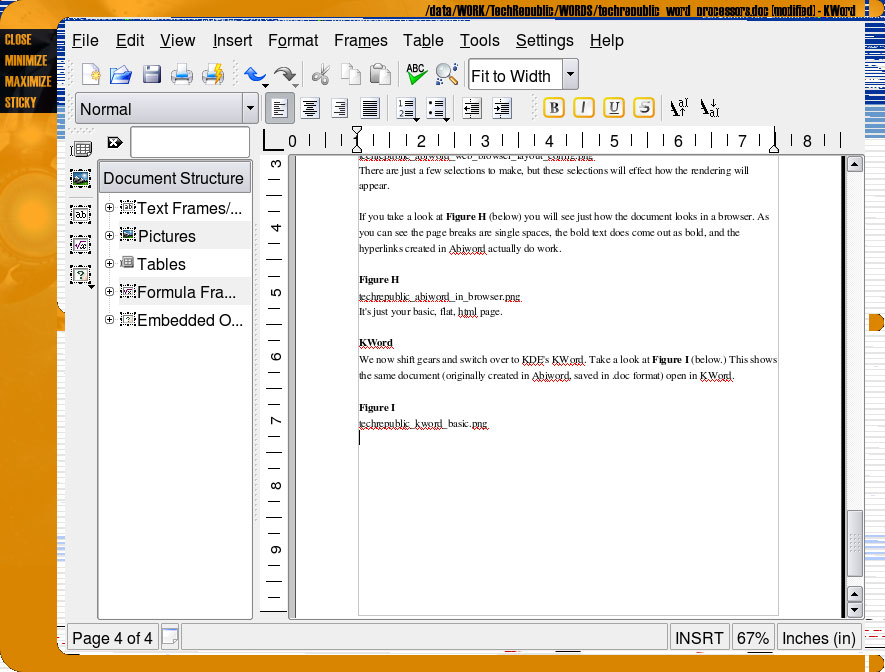 As you can see, KWord
is one busy application.

KWord doesn’t have your everyday UI.
Instead of the basic elements, KWord offers up not only the standard window but
also the Document Structure window, which illustrates all elements included in
your document. This can be useful if you’re working on a more complex document,
but for a basic text document, this tool is unnecessary.

This is easily resolved by going to
the View menu and selecting Display Mode | Text Mode. This will get rid of the
Document Structure pane and leave you with the straight-up word processor, as
shown in Figure J. 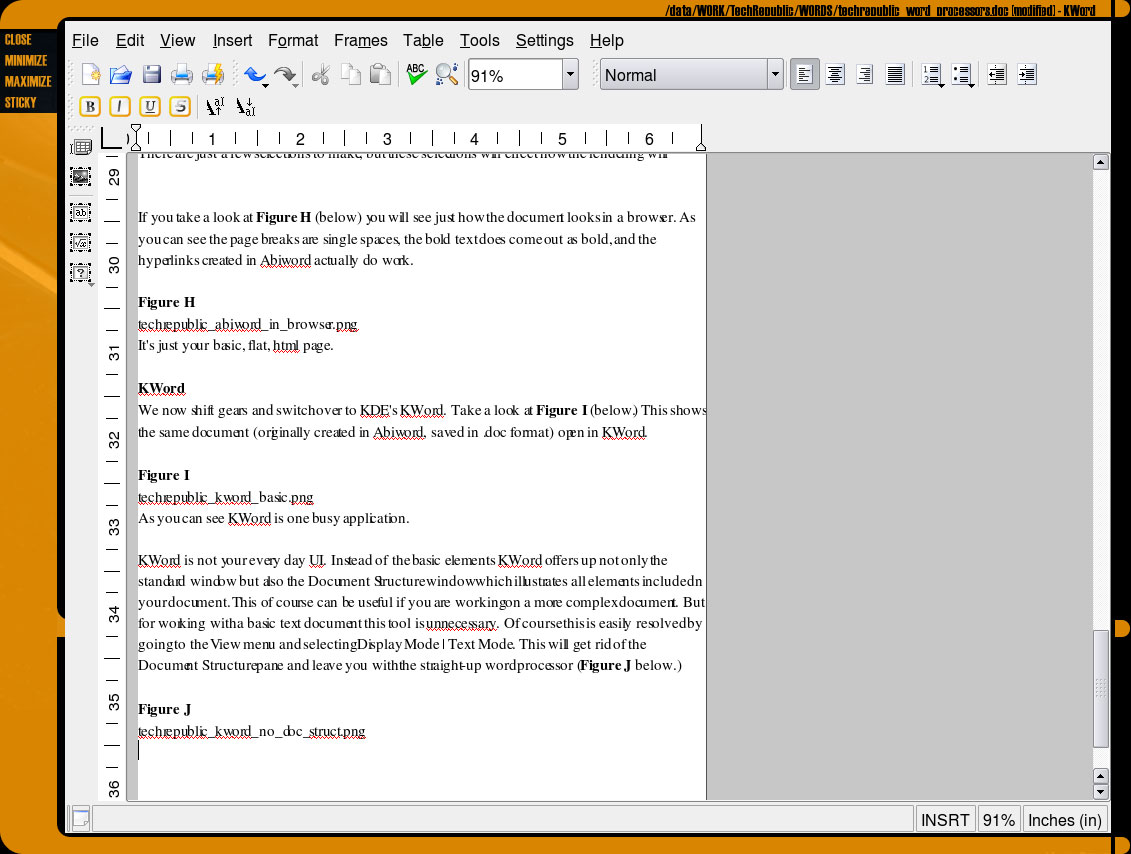 Basic word processing
is much easier without the clutter a more complex document might demand.

One of the nicer features of KWord
is the Personal Expressions. This tool allows you to save phrases that you
repeat and add them quickly. Suppose you’re writing documentation using the phrase ./configure | make |make install frequently.
Instead of having to type this over and over again, you can use KWords Personal
Expressions tool. To do this, go to the Tools menu and select Personal
Expressions. A new window will open where you can edit, add, and delete these
phrases, as shown in Figure K. 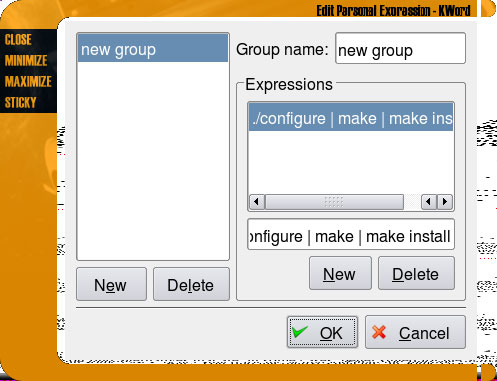 You can also create a
new group to make categorizing your expressions much easier.

Enter the phrase in the Edit window
and press OK. To add that phrase, simply go to the Insert menu, select the
Expression submenu, navigate to New Group, and select the expression to add.
You’ll see the screen shown in Figure L. 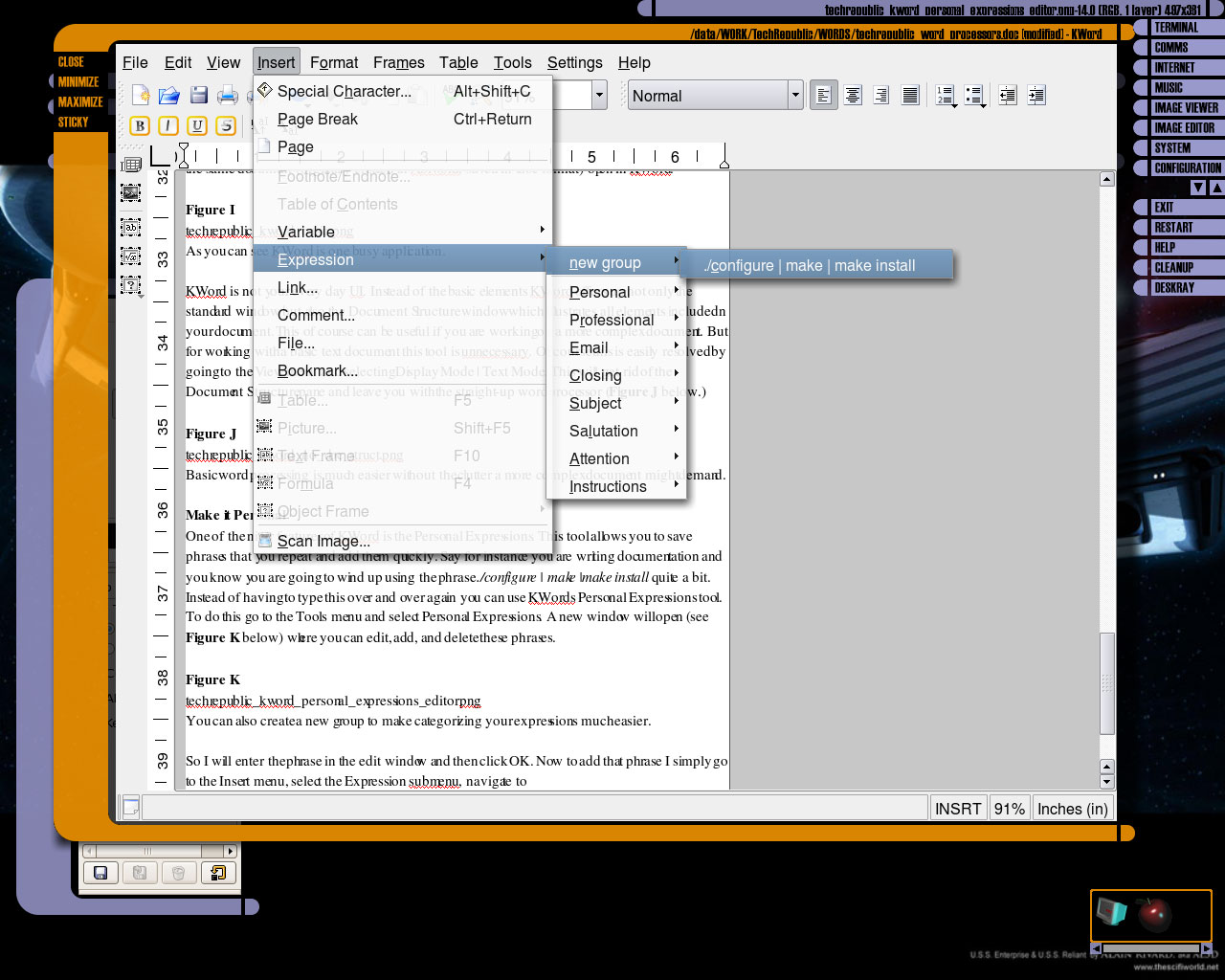 Grouping your
expressions will make your KWord experience much more efficient.

Bookmarks: not just
for browsers

Another outstanding tool included with
KWord is bookmarks. Especially when dealing with longer documents, adding
bookmarks at various points can help make your work more efficient. 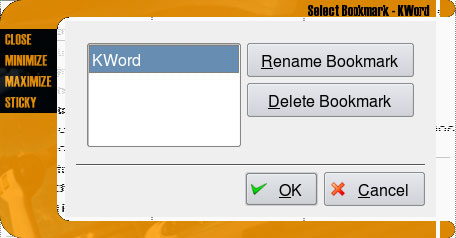 You can also delete
and rename bookmarks from this window.

One of the issues I’ve known about
for quite some time is the discrepancy in word counts between the various word
processors. To test this, I saved and opened this very document in three tools.
The word counts were quite different.

It’s interesting to note that
OpenOffice.org couldn’t initially determine the word count. This is most likely
due to an issue with saving in the .doc format. After a couple of saves, however,
OpenOffice was able to capture a word count. OpenOffice.org and AbiWord were
fairly close in their counts.

This brings up another issue: compatibility.
Opening files between applications brought me little problem, in general.
Outside of OpenOffice not being able to count words, the only other issue was
KWord having letter spacing problems.

One issue that I was happy to not have to deal with was fonts. For
years, I’ve struggled with getting various applications to locate the many
fonts I have on my machine for graphic design purposes. This time around, both
KWord and AbiWord used the fonts installed for OpenOffice: TrueType fonts,
located in /usr/lib/openoffice.org2.0/share/fonts/truetype.

I have to confess to being a big fan
— and frequent user — of OpenOffice.org. However, in a pinch, or on a lesser
system, either of these word processors make an
outstanding alternative. Both tools read and write in many formats with little
or no discrepancies, but where both of these tools shine — especially AbiWord
— is on systems lacking beefy hardware. So if you want to resurrect an older
machine and know you’re going to need word processing, take a look at either of
these tools. You’ll get your work done efficiently and cleanly.

Share: SolutionBase: KWord and AbiWord offer word processor alternatives for Linux users
By Jack Wallen
Jack Wallen is an award-winning writer for TechRepublic, The New Stack, and Linux New Media. He's covered a variety of topics for over twenty years and is an avid promoter of open source. For more news about Jack Wallen, visit his website jackwallen.com.