With nearly one-million SonicWALL security appliances distributed worldwide, it's important that IT professionals understand the fundamentals of working with the SonicWALL OS. In this article, Erik Eckel introduces the different SonicWALL products you may encounter.

SonicWALL routers and firewalls are proving capable and
effective devices within small and medium-size offices. Even enterprise
organizations are deploying SonicWALL equipment in increasing numbers. However,
many information technology administrators and support professionals have
concentrated on building their Windows desktop and server skills. When it comes
to network security, many of those same IT professionals have familiarized
themselves with Cisco equipment or hardware from other manufacturers.

With nearly one-million SonicWALL security appliances
distributed worldwide, though, it’s important that IT professionals understand
the fundamentals of working with the SonicWALL OS. Further, IT pros need to be
familiar with SonicWALL’s different products lines and models, should the need
arise to deploy SonicWALL equipment to connect remote or branch offices, power
a small business site, or protect a large network. In this article, we’ll take
a look at the different SonicWALL products you may encounter.

In this first installment of a series, I will review
SonicWALL’s product lines and explore the features and capabilities the company’s
most popular models possess. In future installments, I’ll walk through the
basic setup of a SonicWALL device, review wireless configuration and explore
installation and configuration of SonicWALL VPN connections.

SonicWALL, like most any manufacturer, constantly changes,
tweaks, and refreshes its product lineup. The company’s product lines can be
broken into eight groups:

This article series will focus specifically upon the UTM /
Firewall / VPN category. It’s within this space that most of the hardware
devices IT professionals will encounter will likely be found. SonicWALL’s
popular TZ and PRO series appliances, which provide high-speed deep packet
inspection capacities and integrate automated and dynamic security controls,
live within the category.

Among the gateway-provided security services that both the
TZ and PRO series offer are antivirus, antispyware, intrusion prevention, antispam, and content filtering protections. Both platforms
support SonicWALL’s Web-based administration interface.

The PRO 1260, like all PRO series appliances, has no node
limitations. It ships with five VPN client licenses (with a max of 50),
supports up to 10,000 connections, and boasts 27 Ethernet connections. The
model includes a SonicWALL Security Processor that delivers 90 Mbps stateful packet inspection (SPI) firewall performance and
30+ Mbps 3DES and AES VPN throughput.

The SonicWALL 2040 includes three Ethernet interfaces (as well as a WAN
port).

SonicWALL’s PRO 3060 appliances possess the same features as
the PRO 2040, with the following upgrades. The PRO 3060 includes 25 VPN client
licenses (with a max of 500) and support for 128,000 connections. The PRO 3060’s
main processor and cryptographic accelerator boost SPI firewall capacity to
300+ Mbps and 3DES and AES VPN throughput to 75 Mbps.

SonicWALL’s PRO 4060 model boasts the same features as the
PRO 3060, with several important upgrades. In addition to including ViewPoint Reporting Software as a full feature, the PRO
4060 ships with 1,000 VPN client licenses (with a max of 3,000), supports a
half-million connections and includes six Ethernet ports. The PRO 4060 also
boasts load balancing and WAN ISP failover support. The 4060 also delivers 300+
Mbps firewall capacity, but 3DES and AES VPN throughput is improved to 190
Mbps.

The PRO 4100 increases the free trial period for the gateway
antivirus, antispyware and intrusion prevention services to one year (from 30
days on lower models), boosts client VPN licenses to 1,500 (with a max of
5,000) and supports up to 600,000 connections. Also notable on the PRO 4100 is
its interface configuration. The appliance includes 10 gigabit Ethernet ports.
The 4100’s firewall stateful inspection capacity
increases to 700 Mbps, while its 3DES and AES VPN throughput improve to 350
Mbps.

The PRO 5060 includes the same feature set as the PRO 4100, with
the following improvements: support connections increase to 750,000, and the
unit ships with 2,000 VPN client licenses. The PRO 5060 also includes six
gigabit interfaces.

The SonicWALL TZ 150 ships with a 30-day free trial of the
gateway security ser vices, support for 10 nodes, five Ethernet ports, secure
802.11 b/g WPA wireless (on the model’s wireless version) and support for 2,000
connections. The TZ 150, however, ships without VPN client licenses (although
client VPN connections are supported through an optional upgrade). The TZ 150’s
firewall performance is rated at 30+ Mbps, while its 3DES and AES VPN
throughput is rated at 10+ Mbps.

The next model up, the TZ 170, includes the same features as
the TZ 150, while increasing the number of nodes to 10, 25, or more (depending
upon the specific SKU/model purchased). The TZ 170 also kicks up the number of
supported connections to 6,000, while boosting the number of Ethernet ports to
7. You can see this unit in Figure B. 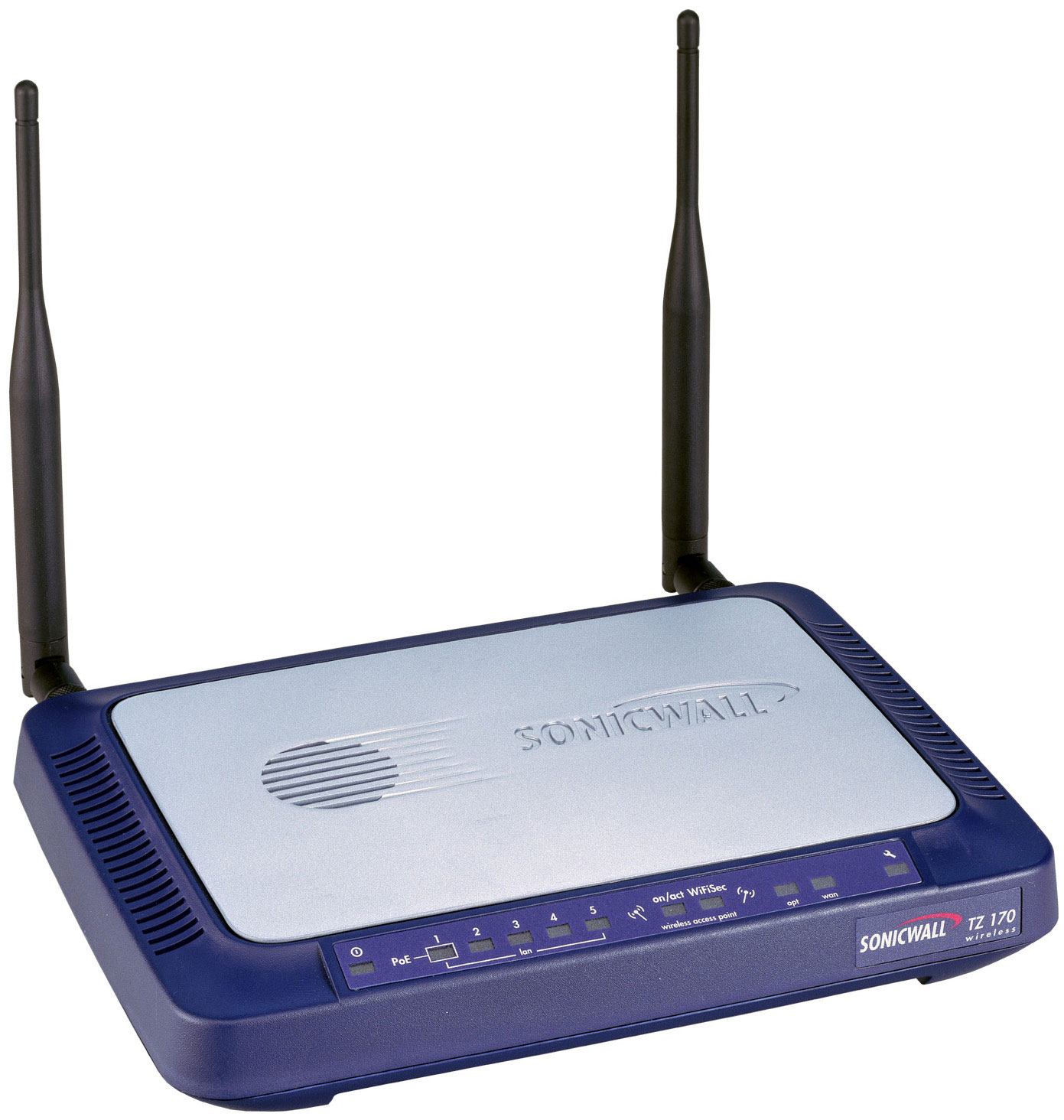 The SonicWALL TZ 170 can be placed on a desktop.

The TZ 180 possesses the same performance ratings and
supports 10 or 25 nodes (depending upon which series model is purchased). The
10-node model can be upgraded to support up to 10 client VPN connections, while
the 25-node device includes one VPN client license (with a max of 25). Also notable
is the fact the TZ 180 increases the term of the gateway antivirus,
antispyware, intrusion prevention and content filtering services to one year
(from 30 days on lesser models). The TZ 180 also includes ViewPoint
Reporting Software that provides real-time and historical views of critical
network security information, while boosting wireless security to WPA2.

The device is notable for its design, which enables
delivering secure network connectivity even in locations where fixed broadband
connections are not available. The TZ 190 supports both GSM and CDMA 2G/3G
networks. The device includes a port for inserting one of approximately 20
wireless PC cards (from such service providers as Cingular, Sprint, and Verizon
Wireless), while continuing to provide the services and features supported by
other TZ Series devices.

SonicWALL devices aren’t typically purchased off store
shelves. Instead, TZ and PRO models must be purchased from authorized
resellers. Authorized resellers abound on the Internet, and online purchases
are typically easy to complete.

Support contracts, too, are available online, as are gateway
security subscriptions. When working with proprietary software, I always
recommend clients purchase support contracts. When trouble arises, and issues
inevitably arise (particularly when it comes to network appliances and
routing), clients and organizations almost always end up saving money as a
result of having support contracts in place.

While not inexpensive, these contracts absolutely assist in
accelerating repairs and shortening outages. For example, one advertised price
places one-year, 24/7 support for the PRO 2040 at $378.