The world's most popular Web server should be able to support secure Web browsing through the use of SSL certificates, right? Without much effort, you can get Apache running with SSL quickly. Scott Lowe gives the details.

As the world's most popular Web server, you would expect Apache to be able to support secure Web browsing through the use of SSL certificates. If this is your expectation, you're in luck; without much effort, you can get Apache up and running with SSL in no time at all.

As with most open source software, you can opt to either build your installation from source files or you can locate the appropriate software packages for your Linux distribution and use your distribution's native tools to handle installation. Since Apache supports a multitude of installation options, I'm going to use the build from scratch method to install Apache with SSL support for the article. For this article, I'm using Fedora 7 for my operating system.

A nice thing about Apache 2+ is that you don't need to do a lot of messing around in order to get SSL working. With older versions of Apache, you had to separately download and configure mod_ssl. For Apache 2 and 2.2 -- I'm using Apache 2.2.4 in this article -- you just need to provide some additional configuration information.

To get started, download the Apache 2.2.4 (or the most recent version) source, which is available for download from the Apache Web site. As of this writing, the latest version of Apache available is 2.2.4. I've saved the file -- named httpd-2.2.4.tar.gz -- to a folder named /usr/src on my server. I like to save installations in this location so I have them for the future.

The next few commands are entered from a command line. I've put them, in order, in Table A.

When you're done with the steps in Table A, browse to your new server. You should get a "It works!" message, as shown in Figure A.

Before you do too much, you should configure Apache to automatically start when your system boots. The steps to make this happen depend on which Linux distribution you're using. Please refer to your system docs for more information. Until you take the steps necessary to get Apache starting automatically with your server, use the "start" command in the last part of Table A.

When you install Apache using the above method, a couple of things happen:

Now, browse to your site using https to see if things work. In this case, I'll browse to https://www.example.com. You will get a certificate error, shown in Figure B, indicating that the certificate may not be valid. This is true for self-signed certificates. Bear in mind that the purpose of SSL is to protect your personal information. If anyone could create self-signed certificates that appeared 100 percent valid, the Internet would be a whole lot more dangerous. A warning message is a good way to tell users to be wary. 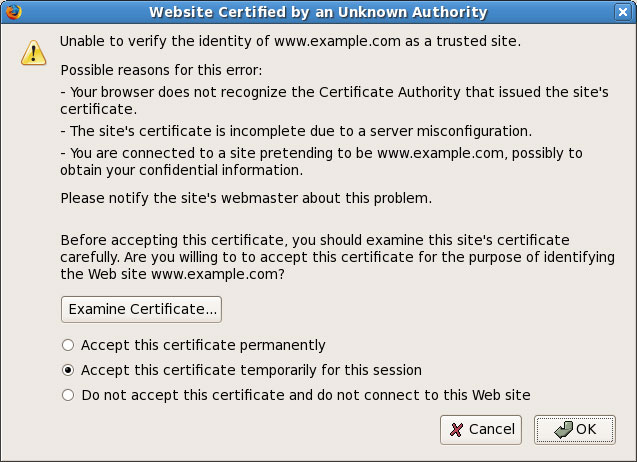 Press the Examine Certificate button to get more details about the certificate. You'll see a screen similar to the one in Figure C. 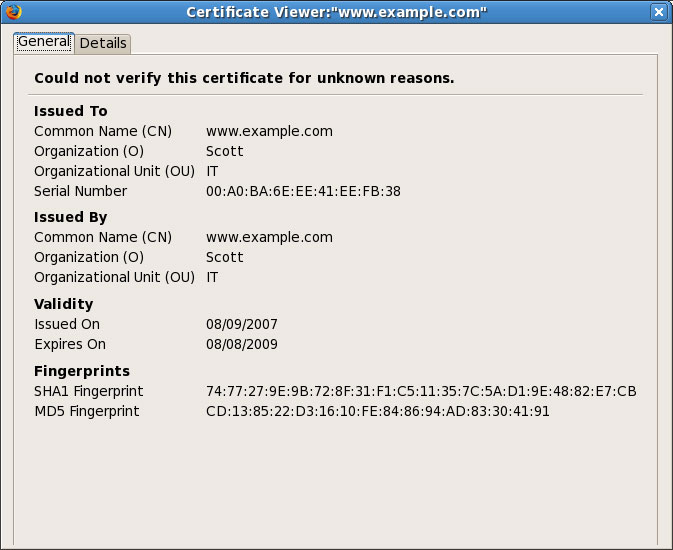 Once you're at your page, note the lock in your browser indicating that you have a secure connection with the site. Again, you still need to make sure you trust the site, but at least the information is encrypted.