Featuring more than 300 updates and improvements, the new Mac OS X Leopard packs several significant enhancements. Erik Eckel takes a deeper look at some of the many new features and enhancements Apple is putting into Leopard.

Featuring more than 300 updates and improvements, the new “Leopard”
release packs several significant enhancements. In addition to including a new
Time Machine automated backup utility, the updated operating system boasts
Spotlight search capability across multiple systems, the Front Row and Photo
Booth applications introduced with Tiger on Intel-powered systems, virtual
desktop “Spaces” that enable users to maintain multiple desktop with
specific applications running simultaneously, the addition of RSS, stationery
and other new features to Mail, and much more. Here’s a deeper look at some of
the many new features and enhancements Apple is putting into Leopard.

The new Apple desktop is designed to “showcase”
user’s photos and graphics as desktop backgrounds. A newly redesigned Dock
features greater transparency, so as to not distract from user’s desktop
images, which enjoy a cleaner desktop.

Mac’s Finder, equivalent to Windows Explorer or My Computer,
is treated to a new iTunes-like interface designed to
simplify data access. Whereas the Cover Flow view in iTunes
displays the cover image of an album (with the album’s musical contents
beneath), the new Finder will present preview views of files within the same
space that iTunes displays cover images. As a result,
users can now flip through file preview images when seeking specific documents,
spreadsheets, presentations, and other files. Figure A shows what the
new Finder looks like in Leopard. 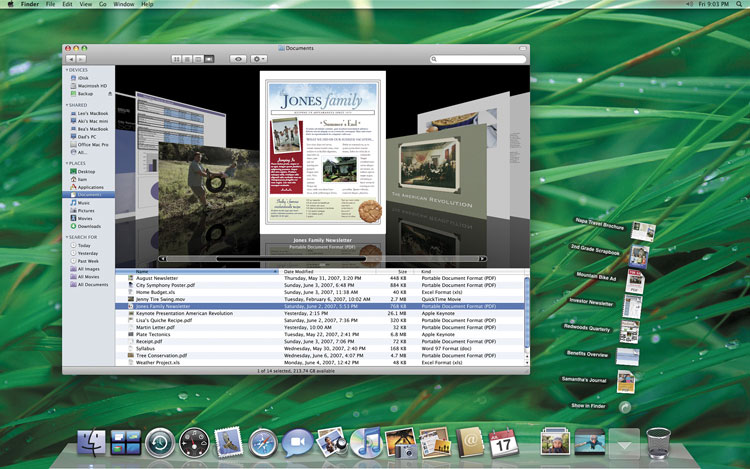 Leopard introduces a
refined Finder view (shown in the large active window), new Stacks (the
collection of icons emanating from the Dock), an enhanced Desktop, a more
translucent, less obtrusive Dock, and other changes.

iCal, the Mac’s default calendar
tool, receives several updates with Leopard’s release. Boasting a new interface
that focuses on a clean and uncluttered look just like the new Mac desktop, a
new iTunes-like sidebar assists Mac users in navigating
calendar items. Sharing files with attendees is as simple as
dragging-and-dropping files into respective events. When e-mail invitations are
forwarded to attendees, any added files are included as attachments. Keep in
mind that this functionality is similar to that found in Microsoft Office,
whereas iCal is the default calendar tool included with Mac OS X and doesn’t
require an additional license.

Also new in iCal is support for group calendaring, in which
meetings can be scheduled for multiple users, resources (such as meeting rooms)
and even equipment (such as LCD projectors) can be booked directly from within
iCal. Based on the CalDAV standard, an iCal Server is
required to power the group calendaring functionality. With an iCal Server in
place, however, users can also browse other staff’s schedules to review
available free time necessary for scheduling new meetings.

Users that rely upon iChat to
power instant messaging sessions will find Photo Booth integration within Mac
OS X version 10.5. Users can apply Photo Booth effects to chat sessions, or
they can present entire Keynote presentations within the instant messaging
application. iChat sessions
can also be recorded (including capturing both audio and video) and saved for
later review.

In the past, Apple’s Mail application provided e-mail
functionality. With the new Leopard release, however, To-Do functionality is
added. Users can simply highlight wording within e-mail messages describing
tasks they need to perform (such as Prepare quarterly report), right-click the
highlighted text, and create a To-Do item. Since the To-Dos are stored within
e-mail, users can access those tasks from any Internet-connect Mac or PC as
well.

Apple’s new Quick Look feature enables viewing a file’s
contents before opening the file. Similar to the Flip 3D feature in Windows
Vista that permits users to view the contents of multiple open Windows, Quick
Look permits Mac users to view the contents of files (including documents,
spreadsheets, presentations, PDFs, and even videos)
without having to open each file. Thus, these short “sneak peek”
glimpses make it much easier for users to find specific files they seek more
quickly on a Mac hard disk.

Apple’s Web browser, Safari, receives an upgrade in Leopard:
Safari 3.0 is loaded by default within the next Mac OS X release. Providing
improved performance, additional security controls (such as a private browsing
feature that disables caching of personal data, among other information),
inline PDF support, and more, the browser provides Mac users with a more
reliable and consistent Web browsing experience.

Apple’s new Stacks feature is among new Desktop enhancements
designed to add to the Mac’s stunning visual appearance. As the Desktop often
serves as the location in which documents, spreadsheets, programs, and other
files are stored, it quickly becomes cluttered. Apple’s designers worked to
help consolidate such files and clean the Mac’s desktop appearance in the
process.

The result is Stacks, which enables users to collect similar
objects in “stacks,” or folders that live on the Mac’s Dock. When a
new item arrives (such as an e-mail or document) within a Stack, the Mac
signals the user the file is present. To view the item, users need only click
the relevant stack icon and a graceful animated arc displays the contents of
that stack.

For example, an employee working from home might wish to
create a work-related Space in which their VPN connection is active and
work-related applications are up and running. A second Space might be dedicated
to sending personal e-mail and surfing the Web, while yet a third Space could
be devoted to music or entertainment-related activities (such as viewing a DVD
movie).

Navigating between Spaces is simple. Leopard places
placeholder icons on the Dock for each Space.

Time Machine is among one of the most important upgrades
Leopard features. The new backup application simplifies data protection.
Whenever a compatible backup device is found (such as a simple external USB
drive), by stating one wishes to use Time Machine, Mac OS X version 10.5
automatically configures backup operations.

Unlike Windows, which requires users to specify which files,
folders, and drives should be backed up, when the backups should occur, what
type of back operation should be run (Normal vs. Differential vs. Incremental),
Leopard simply backs everything up. Everything from programs and applications
to accounts, system preferences, and other data is backed up automatically.

Further, Time Machine provides a feature similar toWindows Restore, enabling users to return to specific
system configurations as they existed on a specific date. However, unlike
Windows, Leopard enables returning an entire system to a specific date,
recovering a copy of a single file from a specific date or restoring a folder
or folders to a specific date. Using Time Machine, Mac users can also encrypt
backups and specify storage limit settings to help manage the amount of disk
space dedicated to backups.

Leopard includes bolstered accessibility features, too.
Besides adding a new voice that speaks more naturally at a faster pace, support
has been added for Braille displays and note-taking devices. Further, voice-over
commands can now be associated with numeric keypad keys using NumPad Commander.

Other accessibility improvements include expanded
closed-captioning support within QuickTime, more applications (including iChat) that “speak” on screen text and VoiceOver support for .Mac online Internet and e-mail
accounts.