Takeaway: The Alienware Area-51 7500 with an overclocked Intel Core 2 Extreme QX6700 Quad CPU and the NVIDIA GeForce 8800 GTX is just about as fast and as powerful as a personal computer can get, at least for right now. But more importantly, purchasing this Alienware desktop in May 2007 will put you well ahead ...

The Alienware Area-51 7500 with an overclocked Intel Core 2 Extreme QX6700 Quad CPU and the NVIDIA GeForce 8800 GTX is just about as fast and as powerful as a personal computer can get, at least for right now. But more importantly, purchasing this Alienware desktop in May 2007 will put you well ahead of the average personal computer curve and keep you there for a long time.

Before we get started, in the interest of full disclosure, I would like to state for the record that I am a PC gamer and I like fast, powerful computers. I am also the proud owner of two Alienware desktop PCs. With that being said, I will also add that I have very high expectations of Alienware and the products they sell and I would be the first to tell you if the company was not living up to those expectations.

I am reviewing the Alienware Area-51 7500, which is probably the company’s most popular line of desktop PCs. The review machine has these specifications:

All of the technical information can be summed up as fast and powerful. Figure A shows you how Windows Vista categorizes the performance. Typical of my experience with Alienware, the way the cables are laid out and tied down inside the case is a work of art. Check out the previously published gallery for a detailed look. 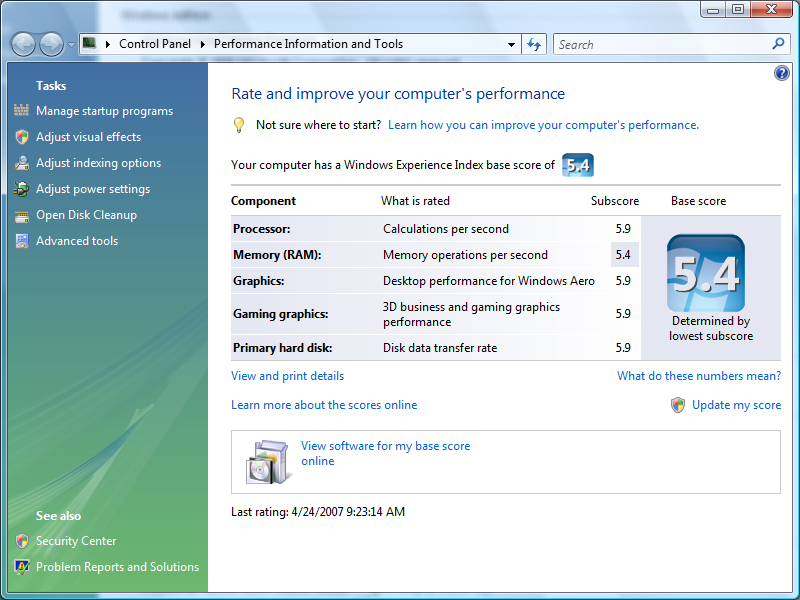 To put some numbers behind the concepts of fast and powerful, I ran the standard set of FutureMark’s 3DMark06 benchmarks available in the free downloadable version of that performance-testing suite. The composite result of 12043 (Figure B) does not disappoint. The Alienware Area-51 7500 was the 34th fastest machine reported to the FutureMark Web site so far (Figure C). A little overclocking of the graphics card and it would no doubt reach into the top ten. 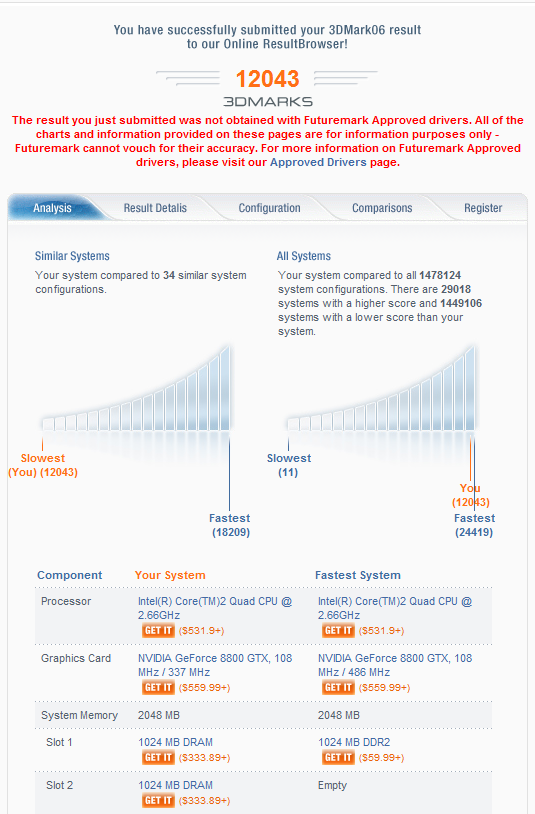 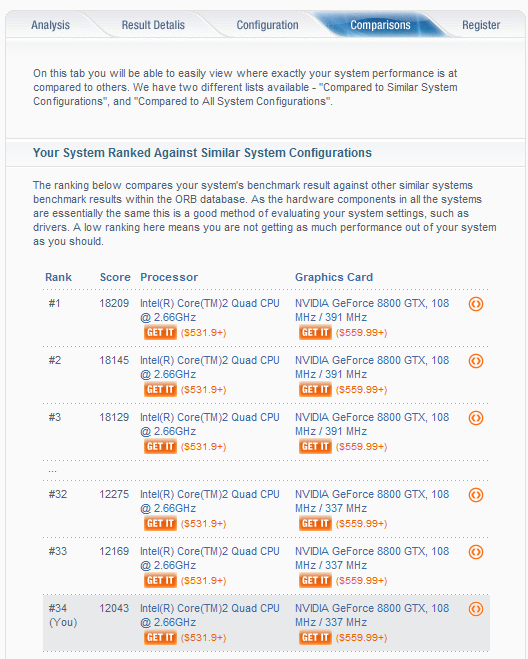 The screenshot show in Figure D is taken from the 3DMark06 benchmark series of graphics tests. Notice the lighting effects with the sun burst reflection on the water below, the shadow effect on the sea monster, and the particle effects from the mist created by the monster jumping from the water. There is a lot of graphical information being processed yet the frame rate remains over 30 per second. 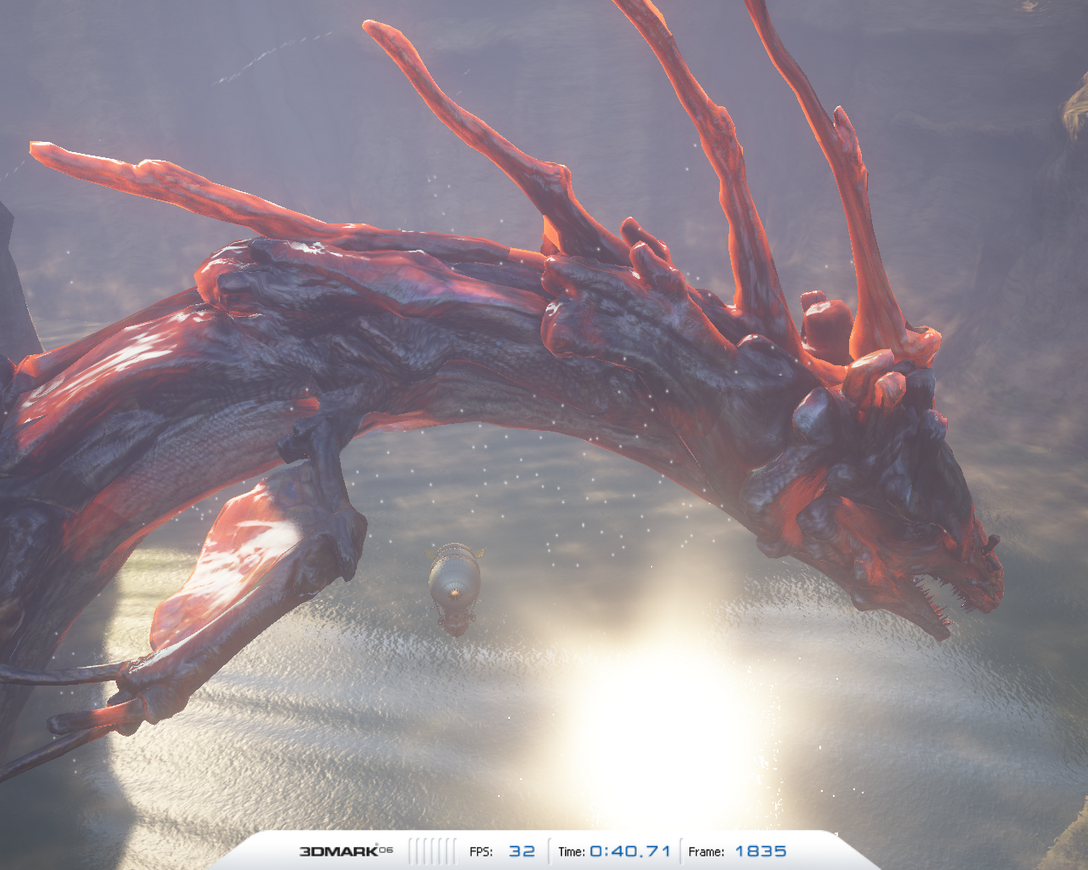 The Alienware Area-51 7500 is DirectX 10 compatible, and while there aren’t any games selling at the time of this review that take advantage of DirectX 10, there are a few demos floating around the Internet. One of the cutest ones is called Froggy (Figure E), where you not only get to see a cute amphibian you also get to poke, prod, and stretch him. Froggy is a free download sponsored by NVIDIA. DirectX 10 should see a marked improvement in the way textures are rendered on screen. In Froggy’s case, you can see he is wet just by looking at him. You can tell his skin has texture and depth. As game developers start to create environments and objects that take advantage of this new leap in technology, you’ll start to see games with an increasingly deeper level of immersion. 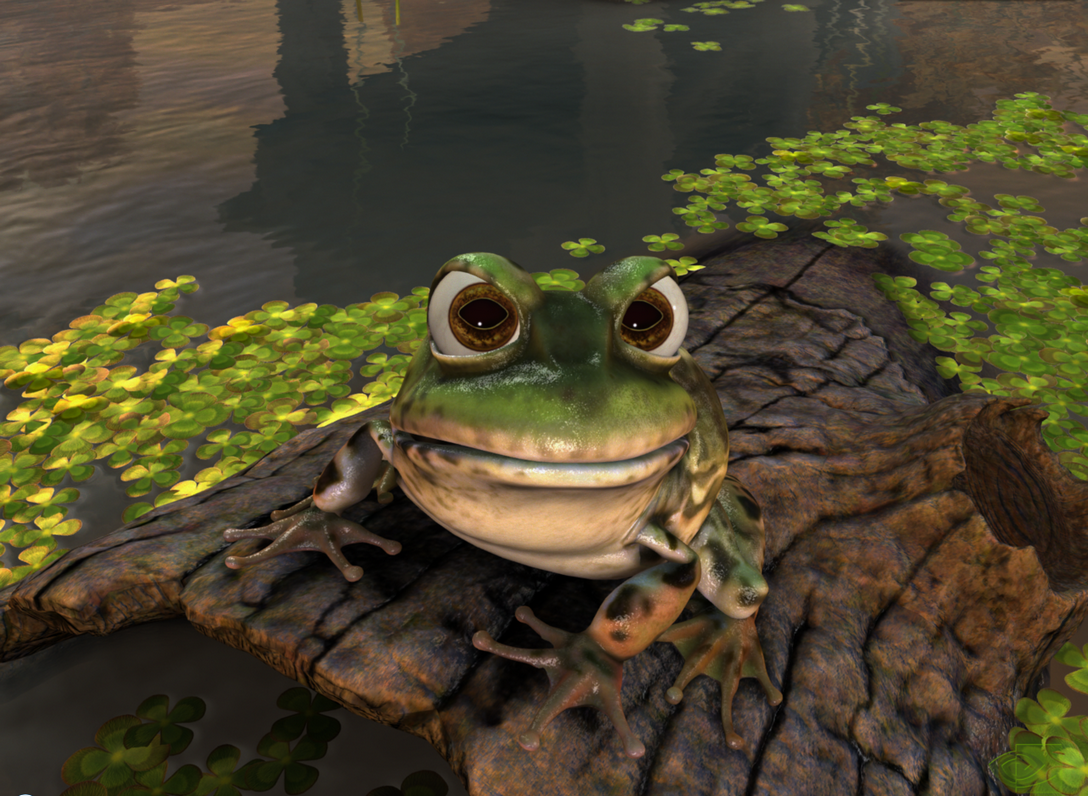 Also showing off the power of DirectX 10 and the 768MB NVIDIA GeForce 8800 GTX is a game demo of Lost Planet: Extreme Condition from CAPCOM (Figure F). This screenshot also gives you a good example of lighting effects. The monsters are highlighted with directional lighting. 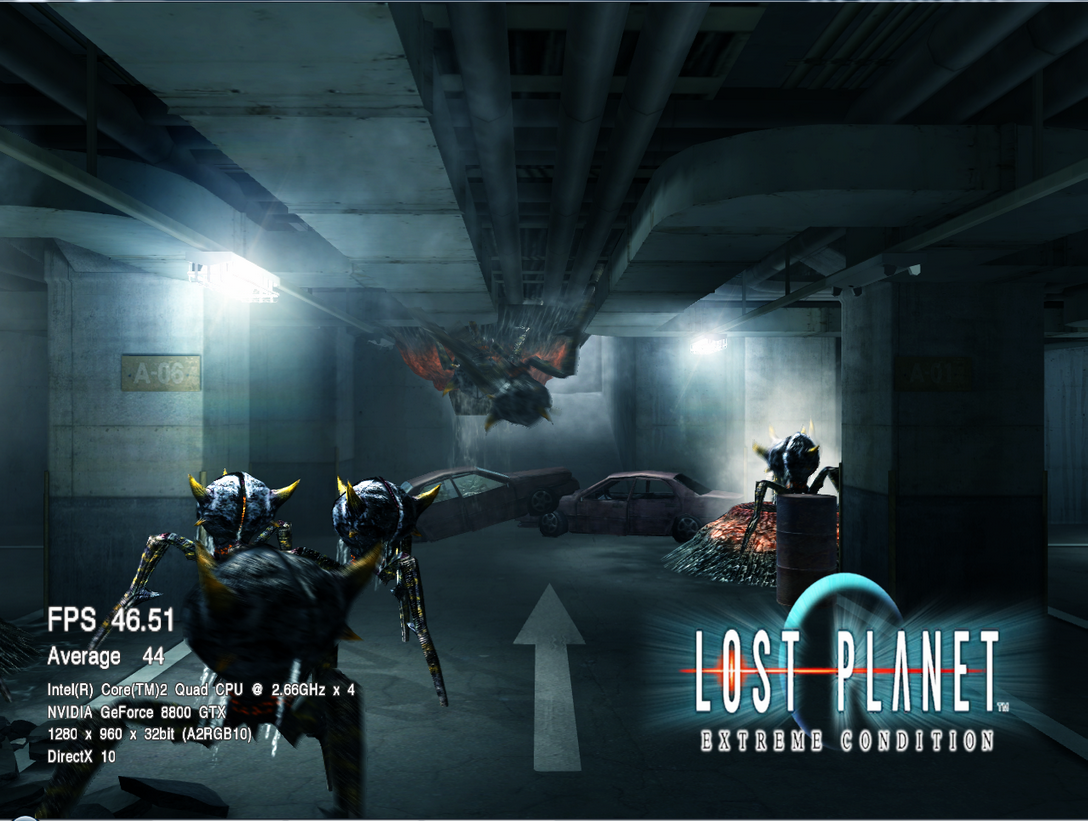 Beyond the outstanding graphic capabilities of the Alienware Area-51 7500, the on-board sound is exceptional. The audio chipset and accompanying software are from Realtek and the inclusion of audio on the motherboard makes a separate sound card unnecessary. (A fact that upsets Creative Labs to no end I’m sure.)

The RAID 0 hard drive setup is okay, but personally I find it complicates upgrading in the future. I know, you’d think 500GB or so of storage would be plenty, but it always seems to fill up somehow. If, and when, it comes time to upgrade you’ll have to upgrade the RAID array, not just an individual drive. It may never come to that, but I like to have flexibility if it does.

The Logitech G5 gaming mouse and the standard Alienware keyboard are fine. The G5 mouse is one of my favorites when it comes to precision, but I prefer a mouse with more programmable buttons. The less time my hands spend on the keyboard the more effective my gaming.

While is very difficult to find negative aspects to the Alienware Area-51 7500, there are a few caveats you should consider before purchasing one of these for yourself.

The first thing you will notice when you take this desktop PC out of the box is that you don’t have a big enough desktop anymore. The Area-51 is a huge machine and measures at least one quarter-length longer then the average desktop PCs. It is quite possible this machine will not fit where your current desktop fits so well.

The next potential negative to note is noise. Even with liquid cooling, as we saw in the First Look gallery, there are some very large fans in the case. Moving air through the case is still paramount to keeping the system running smoothly.

Some might also consider the price to also be a drawback, but if you are one of the people considering the Area-51 you are probably not so concerned by the price tag of around $5,000 for the reviewed model. Enthusiasts buy Alienware PCs because of what they are and the price is not a primary concern. I have been looking to buy one myself for the last few months — I’m willing to pay for a solid PC, especially if I know it is going to be a viable gaming machine for at least three years. The configuration I would order is currently about $4,000. That does not seem extraordinarily expensive to me, but I can see how it might seem that way to you.

One other interesting caveat to consider is the Intel Core 2 Extreme QX6700 Quad CPU — there are no games currently available that will even recognize all four CPU cores. In some cases, the Core 2 Duo will actually run older games faster than the Quad. The Quad CPU is an investment in the future. Games are being developed that will take advantage of all that computing power, but we are talking about these games coming to market in 2008.

Of course, in situations where the four processors are recognized, you can really see the processor shine. Figure G is a screenshot showing three movies running simultaneously and the impact they are having on performance measured by Windows Vista’s Reliability and Performance Monitor. All of the movies ran at the same time with no glitches or hiccups. 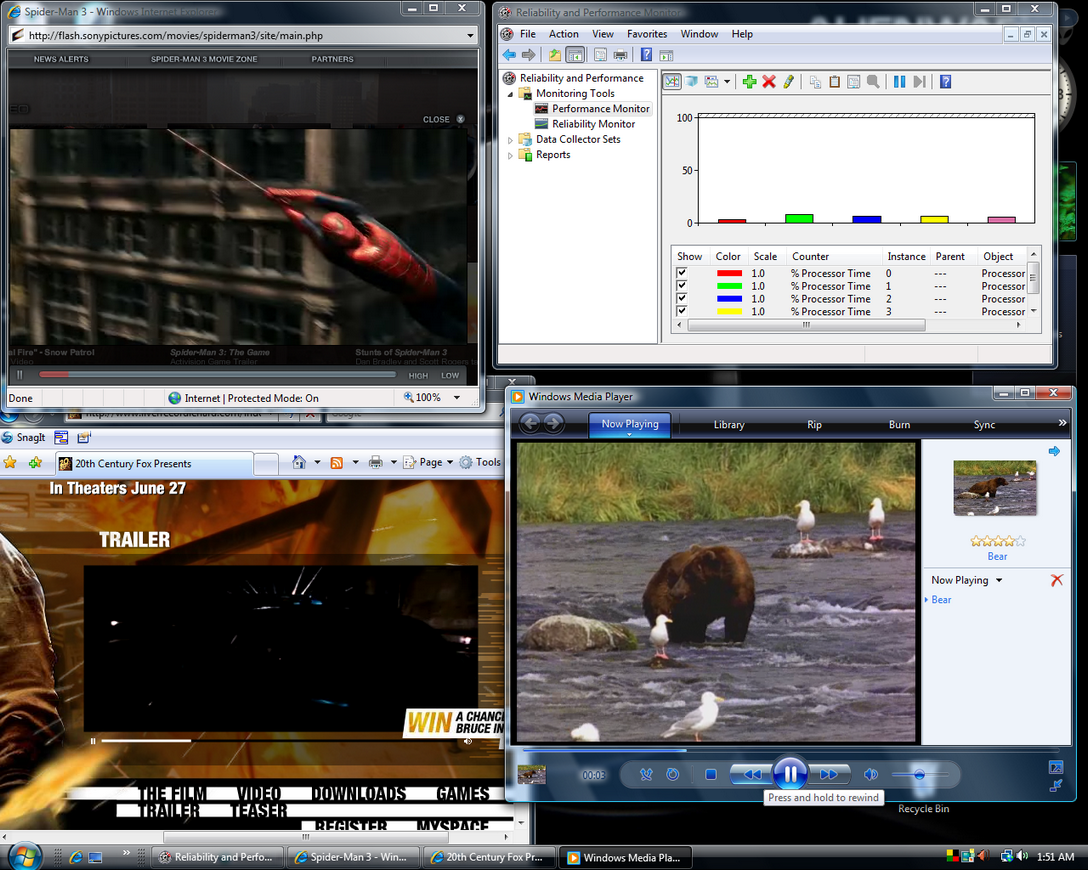 The Alienware Area-51 7500 is a PC gaming enthusiast’s dream machine. This desktop PC is about one year ahead of the average PC curve (maybe more than that) and should be a viable gaming platform for years to come. If you are looking forward to DirectX 10 games with graphics that knock your socks off, this is the PC for you.

But the Area-51 is not for everyone. It is powerful, but it is also big and kind of loud. It has a large price tag. And there are no games currently available that take advantage of all its power. But if those small quibbles don’t bother you, you can’t go wrong with the Alienware Area-51 7500. I have been planning to buy a new Alienware Area-51 myself and reviewing this PC has only strengthened my resolve and increased my desire. I just have to find a place to put it — my desk is not big enough.

Share: Speed and power to grow on with the Alienware Area-51 7500
By Mark W. Kaelin
Mark W. Kaelin has been writing and editing stories about the information technology industry, gadgets, finance, accounting, and tech-life for more than 25 years. Most recently, he has been a regular contributor to BreakingModern.com, aNewDomain.net, and TechRepublic.com.