Stop unfairly comparing Vista to its predecessor and its successor

Microsoft Windows Vista is the current operating system everyone loves to hate. The argument against Vista is that Windows XP is better or that Windows 7 will be better. Greg Shultz recalls hearing similar arguments in the past and wonders if history is repeating itself.

It seems like everywhere you turn on the Web these days, there’s another article bad-mouthing Microsoft Windows Vista and telling you to stay with Windows XP — arguing that XP is the greatest Microsoft OS ever. It also seems like there are just as many articles praising Windows 7 as our OS savior — and it’s barely even a twinkle in Bill Gate’s eye at this point. While reading these types of articles recently, I began to recall other points in the history of Microsoft operating systems and to draw parallels with what happened then with what is happening today with Vista. In this edition of the Windows Vista Report, I’ll explore some of these parallels.

As you know, Windows XP has been around quite a long time now. In fact, if you calculate the duration between the official release date and the date on which Microsoft officially stopped general licensing to OEMs and terminated retail sales of the operating system, you get six years, eight months, and six days. These dates and the other milestones in between are shown in the timeline in Figure A.

While this timeline looks rather short, a lot can happen in six years, eight months, and six days. If you can remember that far back, you know that in between the original release date and the SP1 release date, Microsoft caught a lot of flak for Windows XP’s flakiness. When Microsoft released SP1 and touted it as a vast improvement, many users reported major problems with the update. (Don’t remember? Just Google “XP SP1 Problems.”)

In between SP1 and SP2, malware popped up everywhere, and Microsoft caught a lot more flak for Windows XP’s inadequate security mechanisms. When Microsoft released SP2 and touted its enhanced security features, such as the Windows Firewall, which was enabled by default, there was a major uproar as the firewall seemed to “break” a ton of applications. (Don’t remember? Just Google “XP SP2 Problems.”)

In between SP2 and SP3, the majority of the problems with SP2 were worked out and other improvements were added to the OS as patches and fixes delivered by Windows Update. In that time, Windows XP became the great OS that it is today — the OS that many people swear by. It didn’t happen overnight; in fact, it took a little over four years.

The point that I’m trying to make is that I think that it is unfair to compare Vista at this early point in its lifecycle to XP, which at this point in its lifecycle is an extremely mature OS. All the kinks have been worked out, and it is able to hum along perfectly. If you really want to compare today’s Vista to XP, then compare it to XP SP1. When you do, you’ll see that Vista has gone through the same type of growing pains that XP went through and that Vista’s growing pains at this stage really aren’t as major as XP’s were.

Furthermore, if you take a look at Vista’s timeline and calculate the duration between Vista’s official release date and the proposed SP2 release date of April 2009, you get about two years, three months — shooting at April 30 as a potential release date (Figure B). 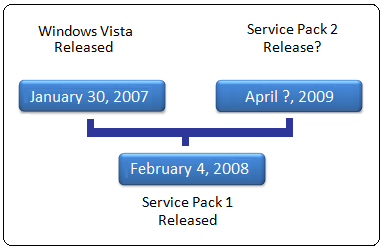 If you compare this Vista timeline to the calculated duration between XP’s release date and the SP2 release date, you get two years, nine months, twelve days. That puts Vista about six months ahead of XP at this stage of the game. And if the relatively mild disruptions caused by SP1 are any indication of how well SP2 will go, then Windows Vista will eventually become a great OS too. It won’t happen overnight, but it will be closer to three years as opposed to the four or so years that it took XP.

When it comes to Windows 7, I’m reminded of the story of Microsoft’s first attempt at a GUI windowing system, called Interface Manager. In their 1992 book titled Hard Drive: Bill Gates and the Making of the Microsoft Empire about Bill Gates and the making of Microsoft, James Wallace and Jim Erikson describe that in 1981 Microsoft first began working on Interface Manager. After about a year and a half into the development of Interface Manager, Gates realized that other software companies were developing similar GUI programs for the IBM PC. One such product was called VisiOn from VisiCorp.

Not wanting to lose out to VisiOn, in January of 1983, Gates let it be known to the computer press that Microsoft would ship its product before VisiCorp could ship VisiOn. However, the back story was that Gates had made this promise weeks before a prototype of Interface Manager had even run on an IBM PC. Even so, the story goes that Gates spent months selling computer manufacturers and software developers on his vision of the GUI. Somewhere along the line Interface Manager became known as Windows.

In October of 1983, VisiCorp announced that it planned to start shipping VisiOn, and at around the same time Quarterdeck announced that it was building a GUI called DESQ. To steal some of the thunder back, Gates immediately orchestrated the formal announcement of Windows — even though that actual product was not really ready. Apparently Gates had learned from IBM that one way to prevent potential customers from moving to a competitor’s product was to announce that your company was working on something even better. Soon afterward, the term “vaporware” was coined by the folks at InfoWorld to describe this marketing technique of announcing a product before it actually exists.

Now, we’ve all read stories about the promise of Windows 7 and we’ve seen some very nice screen shots; but is Windows 7 real? Sure, Microsoft is working on Vista’s successor, but is it just vaporware at this point it time? Is the Windows 7 announcement just designed to prevent us from defecting to Apple and to keep us hanging on to Windows while Microsoft fixes up Vista SP2? Based on the story about Interface Manager, it is a very real possibility.

Regardless of whether Windows 7 is vaporware, Vista is real and I believe that based on the level of improvements that we’ve seen so far, Vista is going to get better and better, and before we know it, Vista will be a great operating system. And when Windows 7 does come out, chances are good that we’ll start this whole process over again — there will be lots of articles bad-mouthing Windows 7 and telling you to stay with Vista. Then, we’ll start hearing about Windows 8.

TechRepublic’s Windows Vista Report newsletter, delivered every Friday, offers tips, news, and scuttlebutt on Vista development, as well as a look at new features in the latest version of the Windows OS. Automatically sign up today!

Share: Stop unfairly comparing Vista to its predecessor and its successor
By greg shultz
My first computer was a Kaypro 16 \"luggable\" running MS-DOS 2.11 which I obtained while studying computer science in 1986. After two years, I discovered that I had a knack for writing documentation and shifted my focus over to technical writing.