Sun Tzu and the art of marketing: Oracle and Salesforce.com’s war of words

Ellison and Benioff get OpenWorld buzzing...

Let’s play a guessing game: what’s been the story that’s made the most buzz at this year’s Oracle OpenWorld? The launch of Exalytics? The general availability of Fusion apps? Or a row over whose keynote was going on where?

Of course it was the latter – the two men being Larry Ellison, CEO of Oracle and Marc Benioff, CEO of Salesforce.com.

Ellison delivered a lacklustre keynote on Sunday – a recap of Oracle’s recent doings with a new product announcement only briefly mentioned.

Benioff, scheduled to deliver his own speech at the event on Wednesday, had the slot cancelled because, he told The New York Times, “Sunday night was such a disaster. Larry was not prepared. The keynote was panned in the blogs and in the Twittersphere. There was concern that we would put on a better presentation. You don’t have somebody over to your house to tell better jokes than you.” 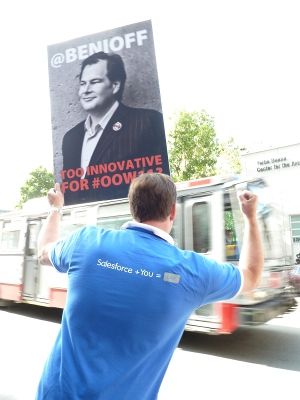 Benioff’s keynote was bumped – first apparently cancelled, then rescheduled for Thursday “when the conference was over”, as Benioff put it.

Benioff petitioned to be allowed his space on stage, he told journalists, pleading with Oracle’s CMO at 11pm to be allowed to give his speech – pleas that were rebuffed.

Benioff moved the party elsewhere, hiring out a restaurant over the road from the conference and giving his keynote regardless. One-nil Benioff. The event was oversubscribed, queues snaked around the block and Salesforce.com staff had an impromptu faux-demonstration on the pavement outside the restaurant, handing out doughnuts and badges, waving placards saying ‘Marc Benioff: Too innovative for #OOW11?’ and encouraging drivers to “honk if you love the cloud”. The odd, presumably confused or SaaS-crazed, driver did exactly that.

Hundreds of delegates ditched Oracle OpenWorld for Benioff’s rival shindig. And what did he have to tell the faithful? Very little new – a rehash of speeches given at Salesforce.com’s own Dreamforce and Cloudforce conferences, to the effect that social and cloud are changing the way we do business and companies have to keep up. So far, so familiar.

A little ironic, then – having mocked Ellison’s keynote, which contained but a single new announcement among a sea of rehashing past achievements, Benioff did almost exactly the same thing.

Benioff himself admitted “no one would have cared about what I had to say” had this furore not kicked off. As it was, he stole the thunder from Oracle to generate a huge amount of column inches, free publicity and buzz for nothing other than having his schedule rearranged.

Ellison is, after all, one of the original investors in Salesforce.com, and Benioff a former Oracle VP.

And it was precisely what Ellison did do, using his closing keynote to deliver jab after jab to Salesforce.com, calling it a “roach motel” with a “bad security model” and the “ultimate vendor lock-in”, among other criticisms.

Ellison is – was? – Benioff’s mentor. “I’m just trying to be a good student,” Benioff said of the scrap, “and do what [Ellison] would have done.”

Benioff is not just a good student, he’s an excellent one – and Ellison is evidently still an excellent teacher. This spat between the two, real or imagined, gave the conference its favourite story and journalists choice quote after choice quote from the pair.

Share: Sun Tzu and the art of marketing: Oracle and Salesforce.com’s war of words
By Jo Best
Jo Best has been covering IT for the best part of a decade for publications including silicon.com, Guardian Government Computing and ZDNet in both London and Sydney.