Due to scheduled maintenance on Dec. 1 - 2, the ability to log into accounts and make purchases is temporarily disabled.

As a hybrid tablet/laptop, Microsoft Surface Pro makes a bold pitch to reinvent the portable PC, but a few big caveats get in the way. Read TechRepublic's product preview.

Over the past six months I’ve asked a lot of IT professionals, business folks, and technophiles what they think about Microsoft Surface. I asked them whether it could be the kind of work tablet they’d want to use, and whether they expect it to be more friendly to business and IT than the Apple iPad and Android tablets. The responses have been surprisingly optimistic. Very few people have been dismissive of Surface, even though it’s fighting from behind in the tablet race.

As I dug deeper with the people who were excited about the Surface, I quickly realized that most of them had very little interest in Surface RT — the less expensive, ARM-based version of Surface that can’t run traditional Windows apps. By far, the most interest — especially from IT pros and techies — was focused on Surface Pro, the Microsoft tablet running a full version of Windows 8 on an Intel processor.

As a result, I’ve been looking forward to taking one for a spin and reporting to the TechRepublic crowd on how it performs. With Surface Pro officially launching on Friday, I can report that I’ve been trying out a Surface Pro and I can share some of my early observations and conclusions.

As a frame of reference, I’ve also been using the Surface RT since its launch in October and I’ve been regularly using the Nexus 7, iPad, and iPad Mini in recent months. In the past I’ve been pretty skeptical about the usefulness of tablets for general computing. I think tablets have their place for specific tasks and functions and as companion devices, but I think most knowledge workers find that using a tablet as their primary system involves too many compromises.

Of course, Microsoft set out to change that with the Surface. Just in case you get distracted and don’t finish reading this post then I’ll give you my two quick takeaways on the Surface Pro: It feels like a much more complete version of Surface RT and I can say without hesitation that Surface Pro is capable of doing more than other tablet on the market.

Does that mean I’m ready to make Surface Pro my next laptop, or that I would recommend it as a viable PC alternative for business professionals? Not quite yet.

I’m not going to get into all of the specs for the Surface Pro or compare its details to the Surface RT or the latest iPad. We do all of that in the full review on ZDNet. Suffice it to say, the Surface Pro is far more powerful than its RT brother, and the iPad, and virtually all Android tablets. But, the tradeoff is an $899 base price and battery life that is much more like a laptop than a tablet. For now, let’s veer away from the numbers and feature lists and focus on user experience and how well this thing really works as a product.

The first thing I noticed as soon as I unboxed the Surface Pro is how thick and heavy it is (even thicker and heavier than the Surface RT). We’ve gotten pretty spoiled in this regard, especially by Apple and Samsung and what they’ve pulled off in slimming down their products. The weight and thickness of the Surface Pro is much closer to the 11-inch MacBook Air and most 11-inch Ultrabooks than to iPad and Android tablets. Otherwise, it looks and feels very sturdy and has the premium finish of a high-end product. 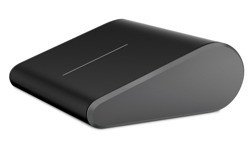 Both the Touch Cover and the Type Cover that I already had for the Surface RT snapped right into place and started working just as well on the Pro as they do on the RT. With the Surface Pro, I also tested Microsoft’s Wedge Touch Mouse (right) since the Pro is a full-blown Windows 8 machine. I was glad I did. It’s a handy little mouse (I especially liked the one-finger touch scrolling) and like most Windows operating systems Windows 8 works best when you have quick access to a right-click button.

Once I logged into the Surface Pro with a Windows Live ID, I immediately got many of the settings, accounts, and files that I had already set up on Surface RT. The SkyDrive integration is the highlight of the services experience. It’s nearly as simple as Dropbox and has a lot more options.

Surface also attempts to do some social integration with Twitter, Facebook, Linkedin, and a few other services, but the experience is a mixed bag. There are some things that are nicely streamlined, like replying to Facebook comments and Twitter mentions from within the People Hub, but other things like the ways it mixes up social network streams and notifications is a bit awkward. I kept wanting to just see my raw Facebook and Twitter feeds (displayed in Windows 8’s minimalist text style), but couldn’t find an easy way to do that and so I gave up.

Once you dig in to do some work, that’s where Surface Pro really shines. There are native Windows 8 Metro apps for Evernote and Dropbox — two of the most popular consumer apps that business professionals love — and you have the whole library of standard Windows apps to draw from and install in Desktop Mode.

Metro apps are very visual and highly usable and I wish there were a lot more of them. If there were, I think it would make the Surface a much more attractive option for average workers. The ability to work with the large catalog of traditional Windows software helps soften the blow, but hardly any of that stuff works well in a multitouch interface. For that reason, I found myself relying pretty heavily on the Type Cover keyboard and the Wedge Touch Mouse for most of the time that I was using the Surface Pro.

That said, one of the most pleasant surprises was how effective it felt to move between the Type Cover/Wedge Mouse and the multitouch screen. There are some things that are faster and more effective with touch — like scrolling to a specific part of a page or flipping through images — and there are some things that are more efficient with keyboard and mouse — like long typing and right-clicking for options — and the Surface Pro was the first device that gave me the feeling that the future of business productivity will likely include both.

The digital pen for the Surface Pro also works beautifully. It’s the most accurate and precise digital pen that I’ve used. It can draw really thin lines and it draws on the screen precisely where it’s supposed to. I’ve never been a huge fan of pen computing, but this one gave me a sense that I could use this to annotate some stuff and do virtual whiteboarding that could actually be useful as part of my daily work.

That was my biggest lightbulb moment with the Surface — seeing how it combines a traditional mouse and keyboard experience with multitouch and pen computing in a way that works naturally and integrates the value of all three.

I have other thoughts and observations but I’ll sum up them up into a list of the kudos, caveats, and needs. Then, I’ll sum up my initial analysis about the Surface Pro.

Surface Pro flirts with greatness, but its caveats could become show-stoppers for a lot of users.

The product brilliantly weaves mouse and keyboard with multitouch and pen computing in ways that feel very effective and useful. When you compare it to other tablets, there’s simply a lot more you can do with Surface Pro because of its triple-play interface and its ability to run the full version of Windows 8 in desktop mode.

What makes tablets like the iPad and its top competitors useful is their ease-of-use, portability, battery life, and big catalog of third party tablet apps. Surface Pro fails most of those criteria. Its dual personalities of Metro and Desktop Mode are powerful but complicated. It’s nearly as heavy as three iPads. Its 4-5 hour battery life means it won’t ever make it through a full day without a charge. And, while Surface Pro has all of the native Windows apps, it doesn’t have many touch-friendly tablet apps. Even if the Windows 8 tablet platform becomes a developer favorite, it will likely take a couple years to get a critical mass of productive tablet apps.

So, what about thinking of the Surface Pro as more of a laptop replacement? After all, under-the-hood it’s more like a MacBook Air or an Ultrabook than a tablet. That’s how I spent most of my time with the Surface Pro thinking about it. However, from that perspective, it’s a laptop that won’t sit in your lap properly (the kickstand tips over). The trackpad on the Type Cover is nice for a tablet but doesn’t match the spacious trackpads on the MacBook Air or the best Ultrabooks. And, even some Ultrabooks now offer mobile broadband and much longer battery life than the 4-5 hours you get with Surface Pro.

I can’t help thinking that if you want most of the benefits of the triple-play UI and full Windows 8 in Surface Pro then you’d be better off with a product like the Lenovo ThinkPad Tablet 2, which has 10 hours of battery life, mobile broadband, an integrated pen, and laptop and desktop docks. The hardware isn’t quite as polished, the screen isn’t quite as impressive, and the accessories aren’t quite as slick, but it starts at $679 and overcomes several of the Surface Pro’s shortcomings.

The Surface Pro is one of the most ambitious products I’ve reviewed. It’s trying to do a lot — ultimately, a little bit too much. But, even if it doesn’t sell well, I expect that Surface Pro is going to be remembered as the product that showed us how keyboard/mouse, multitouch, and pen computing can work together in smart and useful ways. And, either Microsoft will fill the gaps in version 2.0 or other products will run with the triple-play UI.

Share: Surface Pro preview: Triple-play UI is its best innovation
By Jason Hiner
Jason Hiner is Editorial Director of CNET and former Editor in Chief of TechRepublic. He's co-author of the book, Follow the Geeks.