The world of work is starting to understand the power of fun...

The rise of tablets in the enterprise shows that the world of business is changing in a fundamental way: it’s starting to realise the power of fun, says silicon.com’s Natasha Lomas.

Anyone with even half an eye on technology will have noticed the full-blown tablet frenzy we are living through. The iPad may have kick-started this rectangular revolution but the contenders to Apple’s crown are lining up. In recent weeks we’ve heard about the HTC Flyer, the LG Optimus Pad, the Motorola Xoom and the Samsung Galaxy Tab 10.1, to name a few of the iPad’s Android-based competitors.

Then there’s HP’s webOS-based TouchPad, and RIM’s QNX-based BlackBerry PlayBook. And let’s not forget the iPad 2 – Apple’s second-generation tablet is due to launch in the UK on 25 March but has already hit shops across the pond.

The tech world is also swallowing an awful lot of tablet-based predictions. Can the reality of tablets live up to the hype? Analysts don’t pretend to have all the answers but they are betting on a few things: more tablets will be sold this year than next, and some of those sales will dent netbook and laptop purchases. Analyst house Canalys is predicting 52 million tablets will ship worldwide this year compared with about 17 million last year. For every 10 tablets sold this year, it reckons five netbooks or laptops will remain on the shelves.

Apple’s iPad 2, demoed at the UK launch earlier this month, is part of a flood of new tablet devices in 2011Photo: Natasha Lomas/silicon.com

As predictions go, these are pretty safe bets. More tablets are going to flood into the market in 2011 – helped by Google preparing a tablet-focused version of its Android smartphone OS: Android 3.0, or Honeycomb. Expect Honeycomb to do for tablets what Android has done for smartphones: usher in plenty of shiny new hardware.

RIM will also be hoping it can persuade BlackBerry users to keep it in the family by buying its PlayBook slate instead of any rivals. Trailed since last September, the PlayBook is slated for launch in the US soon, and elsewhere this year.

It’s no great leap of faith to believe tablets will eat into sales of netbooks and laptops. Most slates don’t run a full desktop OS but smartphone OSes can do many of the tasks people use their desktops for: email, internet browsing, word processing, watching videos and so on, not to mention apps. Tablets also often make these tasks quicker and – dare I say it – more fun. A tablet might therefore be just the upgrade your old PC is looking for, offering the chance to take a portion of work away from the old warhorse without retiring it altogether.

There are some distinct usability advantages to tablets versus desktops too. Portability, of course. Boot-up times are also generally faster. And touchscreen interfaces can speed up the process of scanning documents and flicking through emails. There’s also the aforementioned fun factor. Don’t underestimate fun: engaged workers are more productive workers so fun really is a business benefit, as gamification shows.

Where does fun come from? In a nutshell: reduced complexity. Having fewer barriers to use makes using anything more natural. Technology especially benefits from fun since it has so often historically been the opposite of fun to use. Tablets get all this. They are the next generation of computers – leaner, literally, and meaner in UI design so users aren’t kept at arm’s length by badly designed systems.

What’s another word for fun? Intuitive. Tablet OSes have to be…

…more intuitive than desktop OSes because mobile users are time-strapped. More intuitive also means more fun – the interaction between user and software is more natural. Layers of complexity have been stripped away. Tablets are simply nicer to use.

Whether it’s finger-based touchscreen interactions – tapping, pinching, prodding – or toggling through OS functions that have been pared back to icons and swipes, with perhaps just the one reassuring physical button, tablets are winning hands-down on the fun factor. Desktop OSes have improved over the years but compared with tablets they still get a big fat fail. They are functional at best, not fun.

Not everything is easier on a tablet of course – doing lots of typing on a touchscreen is not for everyone. As someone who does a lot of writing, I still prefer using a physical keyboard. But there are other speed and efficiency gains that tablets can bring which may balance out their lack of physical keys for lots of business users and uses.

As an aside, not all tablet OSes are equal. And it remains to be seen whether RIM’s pairing of its tablet and smartphone by requiring PlayBook owners to fire up a Bluetooth link to access their BlackBerry email, calendar and messenger services on the slate will be fun or functional. We’ll just have to wait and see. 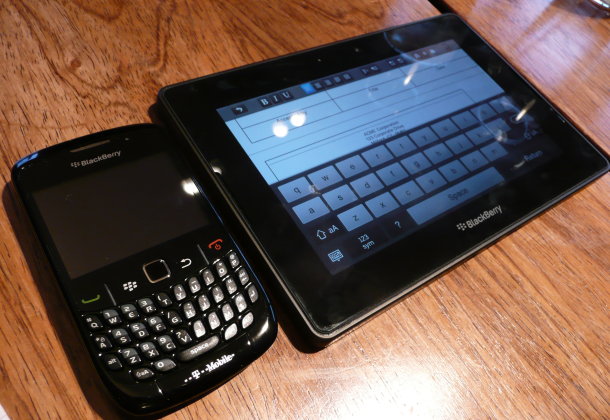 Owners of RIM’s PlayBook tablet have to use a Bluetooth link to a smartphone to access BlackBerry emailPhoto: Natasha Lomas/silicon.com

It’s still early days for tablets but there is a growing sense they are going down particularly well with businesses. Late last year, Gartner predicted slates will find their way into 80 per cent of enterprises by 2013. Canalys is forecasting tablet sales growth of almost 5,400 per cent in the enterprise this year, versus a consumer growth rate of 200 per cent. Earlier this year, a Morgan Stanley study polled CIOs and found that half expect to buy tablets for employees this year. A fifth had already done so.

What are businesses using tablets for? Things you’d expect – presentations, in meetings, for tasks that fall into categories such as general productivity, sales and management. A survey of iPad-owning business users by global professional recruitment and IT outsourcing group Harvey Nash found popular uses for the tablet included a presentation tool, for browsing digital magazines and for taking notes in meetings. In short: for getting stuff done. It’s not the tasks themselves that are revolutionary, it’s how they are being done.

Customer-facing businesses are already plugging tablets straight in. Whether it’s InterContinental Hotels using FaceTime on the iPad 2 to talk to guests, or Australian airline Jetstar Airways test-driving iPads as in-flight entertainment hubs, or retailers using iPads in store displays to show off their full product range on a device that shoppers are already familiar with. Businesses are already putting the fun factor to work for them.

Even the House of Lords is eyeing tablets as an alternative to paper notes used by speakers in the chamber. You can almost hear the digital winds of change ruffling the dusty tradition of ages. It may not be a revolution quite yet but it’s pretty darn close.

Apple talked up business and vertical industry uses for its iPad during the launch of the iPad 2 earlier this month – with schools, hospitals and Salesforce.com CEO Marc Benioff all featuring in a promo video. Benioff was gushing in his praise of the tablet. “This device is how we are going to run the future of the enterprise,” he said.

Polled for their verdict, silicon.com’s CIO Jury was…

…a little more measured. Asked whether slates will completely replace desktops and laptops for “most business users” in the next five years, seven CIO Jury members voted no, five voted yes. The prevailing view from the panel of UK IT chiefs was that tablets can do some things well but not all things, and therefore that tablets make sense for some types of – typically more mobile – workers but not all workers.

That’s fine. For tablets to be a disruptive force in business they don’t need to replace desktops and laptops entirely. If the most mobile executives in your business can be more productive with a slate under their arm, it matters not a jot that the spreadsheet-heavy finance department is still slogging away with breeze blocks under their desk.

CIO Jury members identified the tablet as a particularly good fit for mobile-working senior execs – opening up the possibility of a two-tier office where status is measured not by having your own office or assistant but by how shiny and keyboard-less your work PC is.

“Tablets will certainly be the preferred device for executives but for desk-bound employees the laptop-desktop will be round for quite a few years to come,” predicted Andrew Clarke, group IT director at Arcadia.

“I think it’s fair to say that a dockable tablet will increasingly replace the traditional laptop-desktop environment for enterprise users with some sort of mobility requirement,” said Stephen Potter, CIO at World-Check.

“The tablet is a very good format for media consumption, portability and some kinds of input, but is certainly not a panacea,” added Gavin Whatrup, group IT director at Creston.

“With the right infrastructure in place, the tablet can be used to great effect but it cannot do everything,” said Jeff Roberts, group director of IT Norton Rose LLP.

It’s interesting to note that IT chiefs’ reservations about tablets mainly focused on concerns about newfangled hardware not new software: the lack of a physical keyboard, the limited screen size and the light-touch processing power – rather than the slimmed-down OSes.

New form factors may take a bit of getting used to but considering office workers used to hammer away on mechanical typewriters or dip quill pens into ink wells and make marks on parchment, the shift from desktops to tablets is going to be child’s play. Tablets can easily be docked when at rest, as World-Check’s Potter notes – just add a keyboard and monitor and the stationary slate is effectively a nippy little desktop PC. And there’s plenty of opportunity for hybrid tablet-cum-laptop form factors to help ease the transition, as other CIO Jury members noted.

On the power front, mobile chipsets are gaining ground, with several dual-core tablets in the pipeline or in the market. Apple has beefed up the iPad from a 1GHz processor to the iPad 2’s dual-core 1.2GHz chips. Mobile chipsets are never going to be enough for some power users but many business users have reasonably modest performance needs. Speed and ease of use are what count.

Why, for instance, has software giant SAP rolled out thousands of iPads to its staff? Easy access to information – the ability to speedily scan data. I’ll say that again: speed and ease.

For businesses and business users, tablets hold out that simple promise: fast, easy access to data on the move. We all know data will keep on growing, we all know people aren’t going to stop moving. So yes, tablets are coming. It really isn’t rocket science.

Is your business already using tablets? Are you planning a switch from desktops to tablets? Let us know by posting a comment below.