How entrepreneurs in a corner of East London are gearing up to compete with Silicon Valley...

Q: Why did the East London hipster burn his mouth?
A: He ate the pizza before it was cool.

For many Londoners, the east of the capital – the area around Shoreditch and Hoxton – is associated with a tribe of hipper-than-thou kids wearing shoes with no socks, glasses with no glass in them, and riding bikes with no gears.

It used to be a grubby part of London, and as cheap rents attracted an art, fashion and digital community, start-ups moved to the area. The tail wagged the dog, the galleries, the bigger businesses and technology heavyweights followed.

Nowadays, the area around Silicon Roundabout still plays home to tens of digital start-ups, working in disciplines including design, mobile apps, social media, analytics, consultancy and more. However, it has of late been joined by some more long-standing technology companies – including BT, Cisco, Firebox, Intel and Twitter (through Tweetdeck). Even Google recently took out a lease on a property in the area – along with a handful of professional services firms aiming to serve the growing digital community.

This recent influx is in some part down to the government spotting a bandwagon rumbling past and jumping aboard. PM David Cameron last year announced a government-backed investment programme to encourage established and start-up tech companies to set up there, with the aim of establishing a technology hub – known as The East London Tech City – in the area from Shoreditch and Old Street to the Olympic Park.

And along with encouraging the big names to open offshoots in the area, the Tech City announcement brought promises of financial and intellectual property advice for start-ups and links with local universities, boosting the area’s credibility further.

Digital production company Somethin’ Else has been in the Tech City area for some 20 years, long before it became known as Tech City. 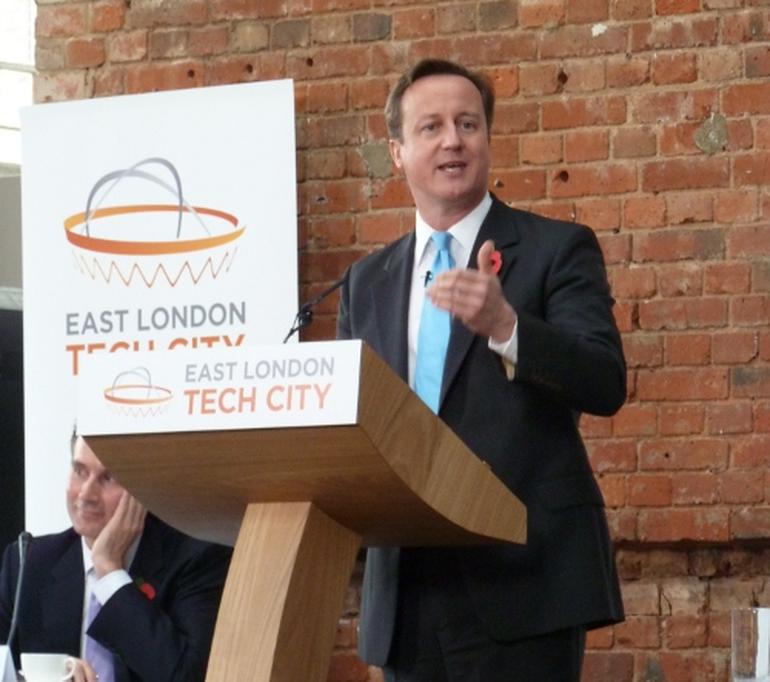 According to Eric Van Der Kleij, CEO of the Tech City Investment Organisation, the number of start-ups in the area has spiked since the government’s involvement: “It has more than doubled in less than eight months,” he told the Wall Street Journal in an interview earlier this year.

Many of the East London tech companies have been around since before Tech City was a glint in a politician’s eye, established by individuals who liked the area’s feel and didn’t want to travel too far to work.

Entrepreneurs and digital types moved in, set up their businesses from their bedrooms, ran them from coffee shops and, when they found the company growing to such a size an office was necessary – well, why look too far from home?

Julian Erhardt, business development manager of ustwo – a user interface design company that’s been housed in Tech City since 2004 – summed up the pull of the area as: “Work here, live…

As companies went from start-up to stalwart, a scene developed and gave businesses in the area even less reason to find an alternative home.

Somethin’ Else has had four moves in its life as it expanded and its office space grew accordingly: “We like it round here – we just don’t want to move.”

“What we do get is that all our friends are around here, like minds all over the place and collaborations are easier and idea swapping is easier and generally meeting people,” he added.

For many small businesses and start-ups in the digital arena, it’s the community that’s appealing – the area acts a business dating service, encouraging serendipitous meetings between organisations.

Apps for Good is an offshoot of digital inclusion charity CDI Europe – an organisation which runs a programme for schools, training them how to teach their pupils to build simple mobile and web apps. While the organisation didn’t start off aiming to be a Tech City business – rather it ended up in the area because that’s where it was initially given office space – it still sees a benefit to having its home in the area.

“This whole East London quarter is the area to be – we wouldn’t want to be doing this in West London or Marble Arch,” Apps for Good’s head geek – a very East London job title – Daniel Morris said.

“There’s a community here as well. It helps to be able to call upon people in lots of different ways,” Morris said.

The visibility that being in the area gives the organisation – and the density of digital businesses nearby – serves Apps for Good too. On the hunt for mentors for its programme, chance meetings must serve in place of a business development team.

…upswell in people wanting to give back,” Morris said.

A screenshot from one of the apps made by schoolchildren on the Apps For Good courseImage: Apps for Good

“Companies see other companies talking to us… we’re not a huge team to have a salesperson,” Adizah Tejani, Apps for Good’s communications manager, added.

PC accelerator software company 360 Amigo specifically picked East London as its base due to the community of digital companies in the local area, moving into local co-working – and networking – space TechHub.

“We wanted to be [in the area] just because of the clustering and TechHub was the obvious place. It’s mainly for touching down, meeting people, going to the parties and just for being part of the scene, I suppose,” Rupert Cook, one of 360 Amigo’s founders, told silicon.com.

“I was there for the [TechHub] first year party and met all sorts of interesting people. It was really useful to be able to discuss everything from hiring issues to their experience of the freemium business model. It is just useful to be able to have those sorts of conversations with lots of people at the same time – I must have spoken to 20 different companies in that evening, all of whom are going through the same sort of issues,” he added.

For those that want to network, East London isn’t short of meet-ups – such as the Silicon Drinkabout or the numerous events at TechHub – but for most businesses, the Tech City designation has brought a more straightforwardly useful sort of footfall.

Thanks to the government sticking a pin in a map, calling it Tech City and throwing some UK Trade & Investment (UKTI) promotional muscle behind it, potential customers and investors have woken up to the digital companies working in the area.

“It’s nice having government backing for the area and the UKTI and others focusing on the area. In terms of our international profile, that’s been really useful. There’s definitely a greater profile for what the area’s about,” Somethin’ Else’s Bennun said.

ustwo’s Erhardt has also seen more buzz, meetings and exposure post-Tech City. “It’s been fantastic for us, increasing visibility for our studio,” he said.

“When the government talked about [Tech City] and labelled it, it led to a lot of people from the corporate world and state sector starting to pay attention and…

“It’s doing a lot of good – we see a stream of people from corporations, overseas businesses, government,” he said.

An example of the power of branding, by giving East London’s digital heartlands a new name, it seems the government has been able to generate interest in, and business for, the area.

An outside view of the Trampery in London’s Tech City, home to Trampoline SystemsPhoto: Jo Best/silicon.com

The labelling of Tech City has had, according to Trampoline Systems’ Armstrong, a “magic effect” – he cited OECD research that found that simply having a government label something a cluster, even if it does nothing else, leads to a significant increase in inward investment.

Aside from a lot of cheerleading – even the Duke and Duchess of Cambridge have promoted the initiative – what else is the goverment doing for businesses in Tech City? It’s putting its hands in its pockets to the tune of £2m, with the Technology Strategy Board calling for proposals from SMEs and micro-businesses for innovative R&D projects in and around Silicon Roundabout, which it will fund with a series of £100,000 grants.

It’s worth noting that the grants are only available as matched funding – that is, those awarded the money will have to find another backer to put in the same amount before the grant can be claimed – so how much of that will actually end up in the hands of start-ups is unknown.

“We want to draw investment and people into the area, and to encourage networking and collaboration to strengthen the cluster. We are therefore looking for projects that may be too risky for companies to go for alone or that may take them into new areas, and where the majority of the project activities will take place within the Tech City area,” the Technology Strategy Board said.

But the growing interest and number of organisations set up in the Tech City area is bringing its own problem to the same start-up community it’s seeking to bolster. Thanks to the increasing popularity of the area, rents are rising – potentially putting them beyond the reach of nascent businesses and entrepreneurs without investment.

“Anecdotally, [start-ups that can’t afford offices] are jogging between people’s homes and cafes. The biggest risk for Shoreditch is …

…that the success has led to a rapid rise in property prices,” Trampoline Systems’ Armstrong told silicon.com.

Along with Trampoline Systems, Armstrong has also set up The Trampery – an office space and co-working environment for start-ups looking to base themselves in East London, which now plays home to 14 of the area’s digital businesses.

The first Trampery opened in May 2009, with 15 seats. Ten more were added, then a further five. Demand continued and in May this year, the Trampery moved to larger premises with 50 seats, double the square footage, a roof garden and an events space – and it’s now at capacity.

Armstrong is planning to open a bigger Trampery-style offering – a 500- to 1000-square-feet open-plan workspace – aimed at organisations of up to eight people later this year.

“We’re really keen to take the recipe we developed here [at the Trampery] and fill in the gaps and expand it,” he said. “We could be doing 10 of these and we still wouldn’t be meeting demand,” Armstrong told silicon.com.

“Lots more software start-ups wanted to be here and I was hearing from a lot of people they couldn’t find that first rung on the ladder.

There’s no place like gnome: inside the TramperyPhoto: Jo Best/silicon.com

“It’s the starter home syndrome – that first step is the hardest,” he said.

The Tech City cluster grew up unaided, as start-ups were drawn to the area by the low rents and the like minds at hand. Now, the cheap rent has long gone as bigger companies, and those with better funding, come to join the party, and the kind of small businesses that kick-started the area are being driven out of it, no longer able to afford East London’s overheads.

The government’s flag-waving for the UK’s tech scene can only be applauded – but could there now be a risk of it becoming the victim of its own popularity?

Share: Tech City: Inside London’s digital start-up hothouse
By Jo Best
Jo Best has been covering IT for the best part of a decade for publications including silicon.com, Guardian Government Computing and ZDNet in both London and Sydney.