The complete guide to a Windows 8 clean installation

Greg Shultz documents the entire Windows 8 clean install procedure so we have a roadmap to follow and know what to expect.

When the download was complete, I was contemplating installing Windows 8 in a dual-boot configuration, but decided to sleep on it. After weighing my options, I decided against a dual-boot configuration thinking that if I could easily access Windows 7, it would turn into a crutch and I would find myself frequently returning to the familiar environment just because I could. Instead, I decided to blow away Windows 7 along with all the partitions, and perform a clean install of Windows 8.

As I was formulating my plan, I thought that I would document the entire procedure so that those of you who decide to go the clean install route will have a roadmap to follow and know what to expect.

Of course, before you get started, you should back up your data. You can use Windows 7’s Backup and Restore to create a backup or you can simply copy your data files over to an external hard disk. You might even want to do both operations. After all, you really can’t have too many backups, can you?

After booting from the DVD that I created from my download, the first thing I encountered was the new light blue Windows logo on a black background, as shown in Figure A. This image remained on the screen for a few moments while Setup was initializing. I was kind of hoping that the flag would be animated, but the only animation was the dots spinning in a circle. 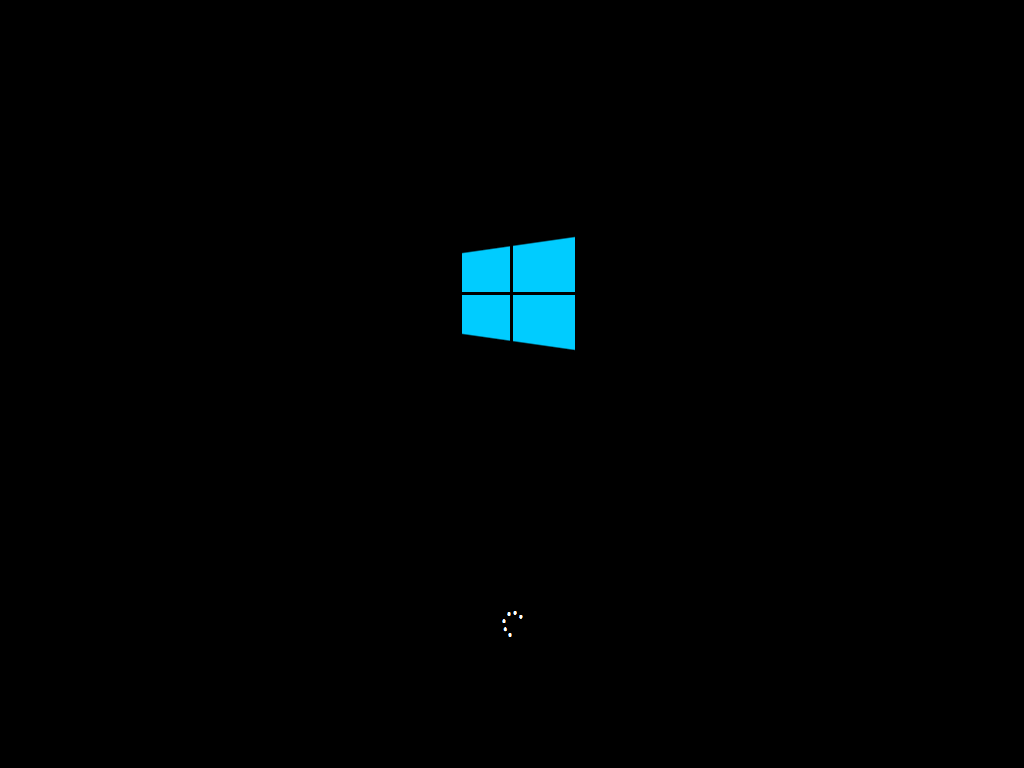 After a few minutes, you’ll see the Windows Setup screen shown in Figure B and you will specify your language settings before clicking Next. When you do, Setup will perform some more initialization tasks in the background. 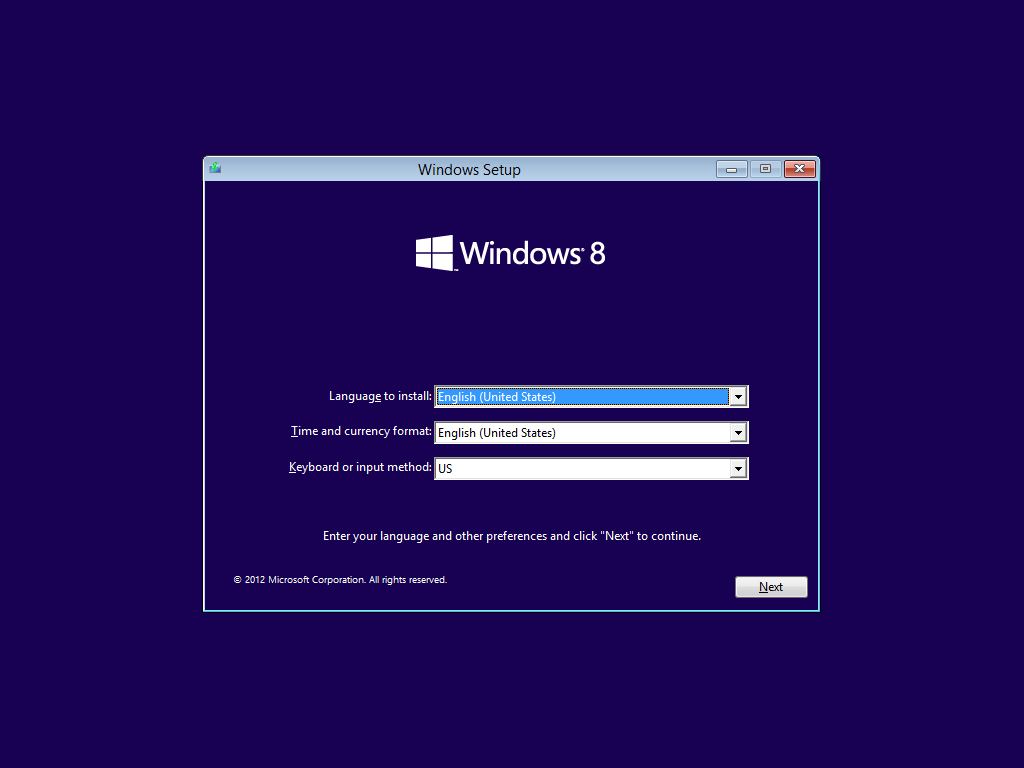 As soon as the initial steps are taken care of, you’ll see the Windows Setup screen shown in Figure C and will click the Install Now button. 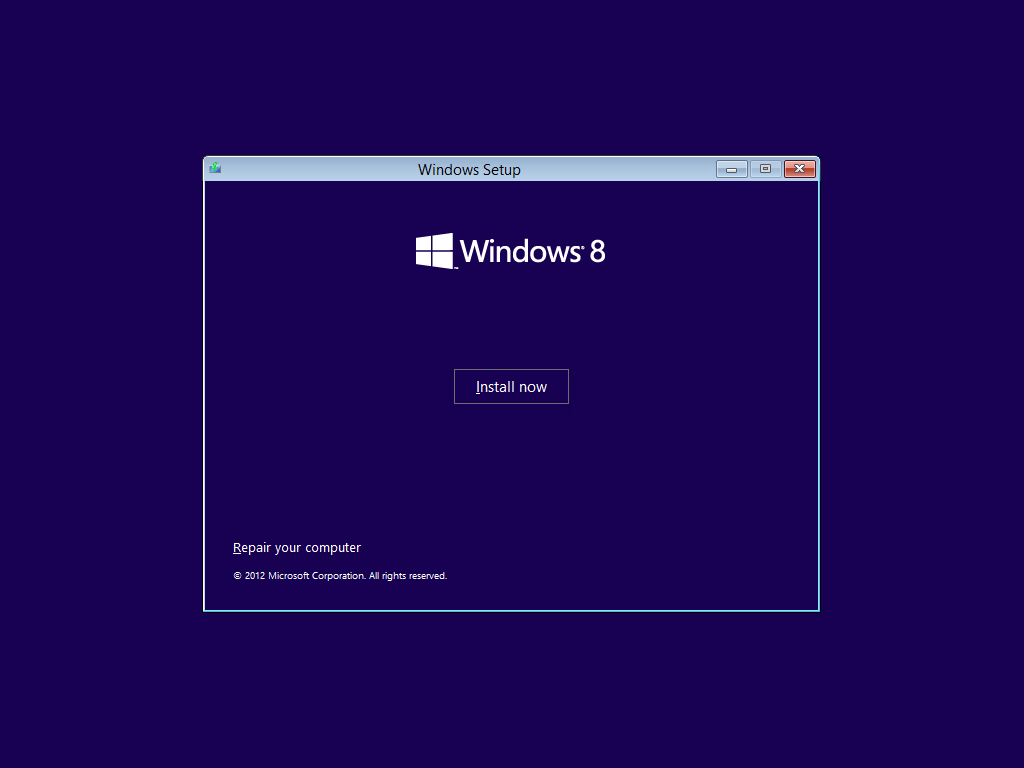 To get started, just click the Install now button.

Once you click the Install now button, you’ll see the beginning of the information collection phase of the installation procedure. As you can see in Figure D, the first step here is to input the Windows 8 product key. 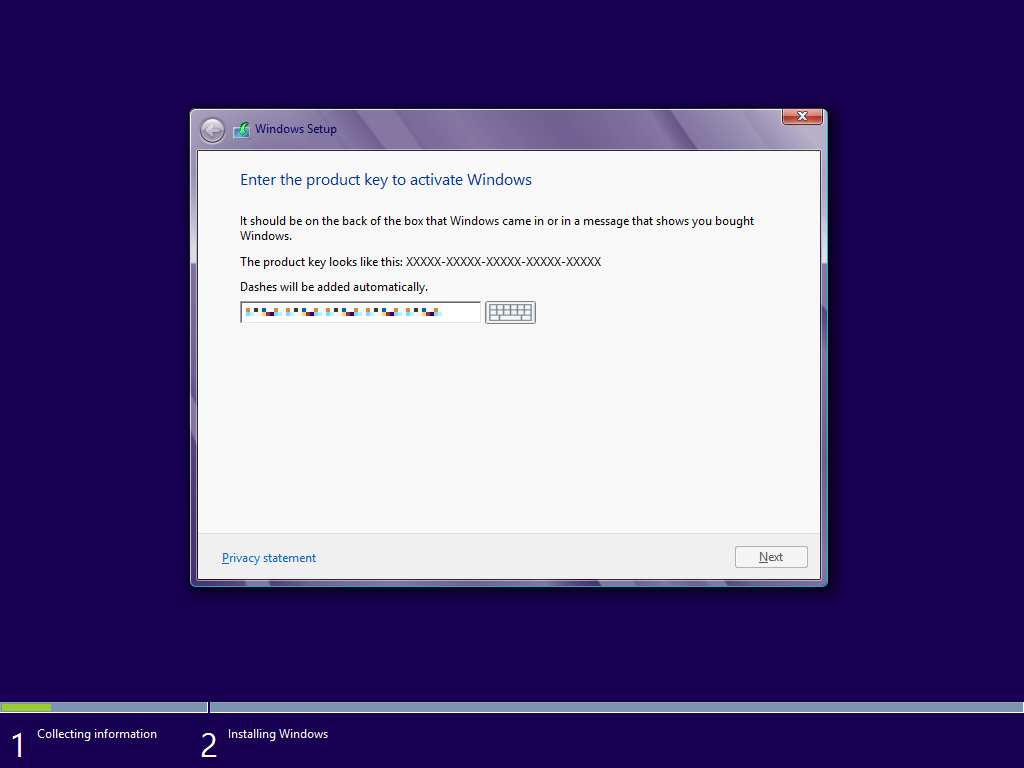 You’ll enter your product key to start the information collection phase of the installation procedure.

The next step is to acknowledge that you accept the license terms, as shown in Figure E. If you take the time to read through them, you will see that Microsoft has indeed radically overhauled EULA as Ed Bott over at ZDNet wrote about in a recent column.

Even if you don’t take the time to read the license terms during the installation, once you have installed Windows 8, you can find the Microsoft Software License Agreement in the Windows Help and Support system – just search with the term License. Not only is the license shorter in length, but it is also much clearer and easier to read. 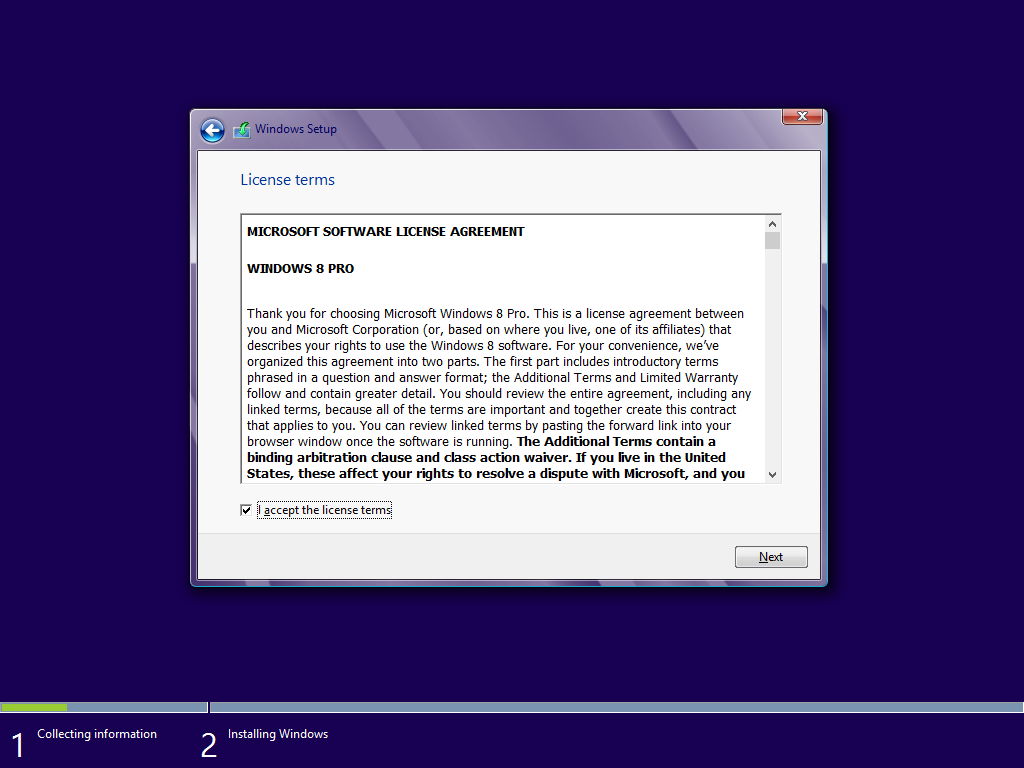 The new EULA is much easier to read that previous versions.

When you are prompted to choose which type of installation you want to perform, as shown in Figure F, you’ll choose Custom: Install Windows only (advanced) type in order to perform a clean install of Windows 8. 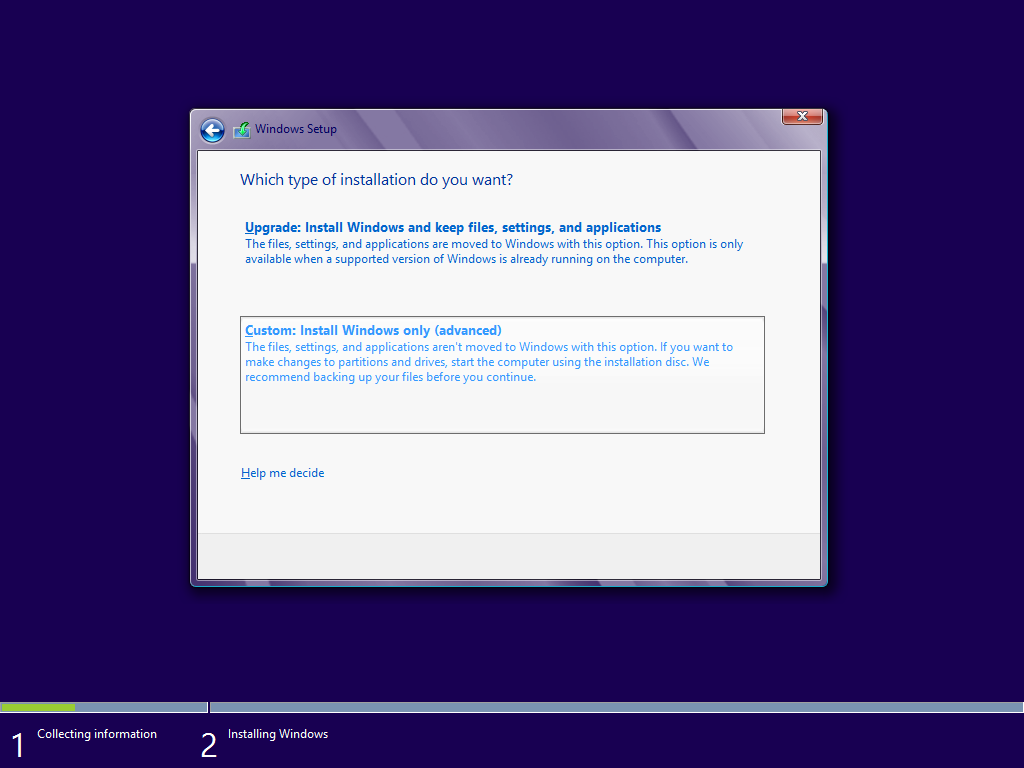 In order to perform a clean install of Windows 8, you’ll select the Custom option.

When you are prompted to choose where you want to install Windows, as shown in Figure G, you’ll see a list of any partitions that are currently on your hard disk. As you can see in my example system there are actually four separate partitions. You may have a different combination depending on your system.

As I mentioned, performing a clean install means blowing away all existing partitions. The first partition in this list is labeled System Reserved and it was created automatically during the Windows 7 installation. A new System Reserved partition will be created by Windows 8, so you can remove existing one. The partition labeled Recovery contains the OEM recovery for Windows 7. I created the recovery DVDs soon after I got the new system. It won’t do me any good going forward with Windows 8 anyway, so I will remove that partition too. The partition labeled WIN7 contains the Windows 7 installation that I am replacing, so it is definitely going. The partition labeled DATA contains all of my data that I copied to an external hard disk, so it is safe to blow that one away too. 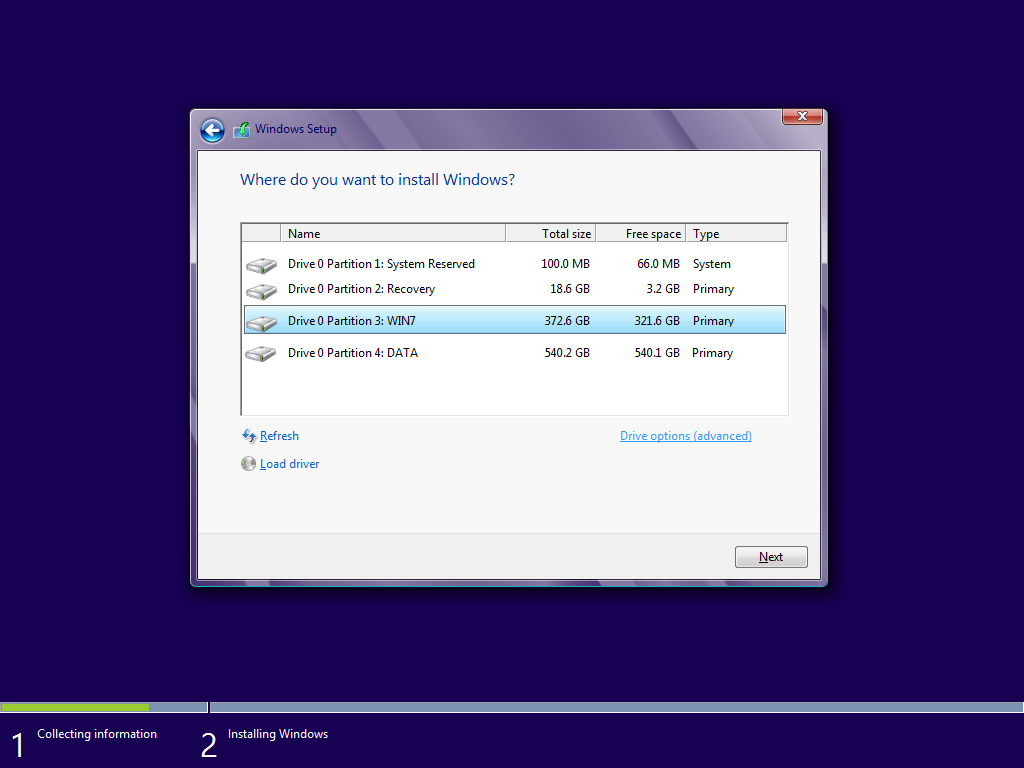 On you example system there are four partitions that I will be blowing away.

To begin blowing away partitions, you start by clicking Drive options (advanced). When you do so, you’ll see a list of commands for managing partitions, as shown in Figure H. 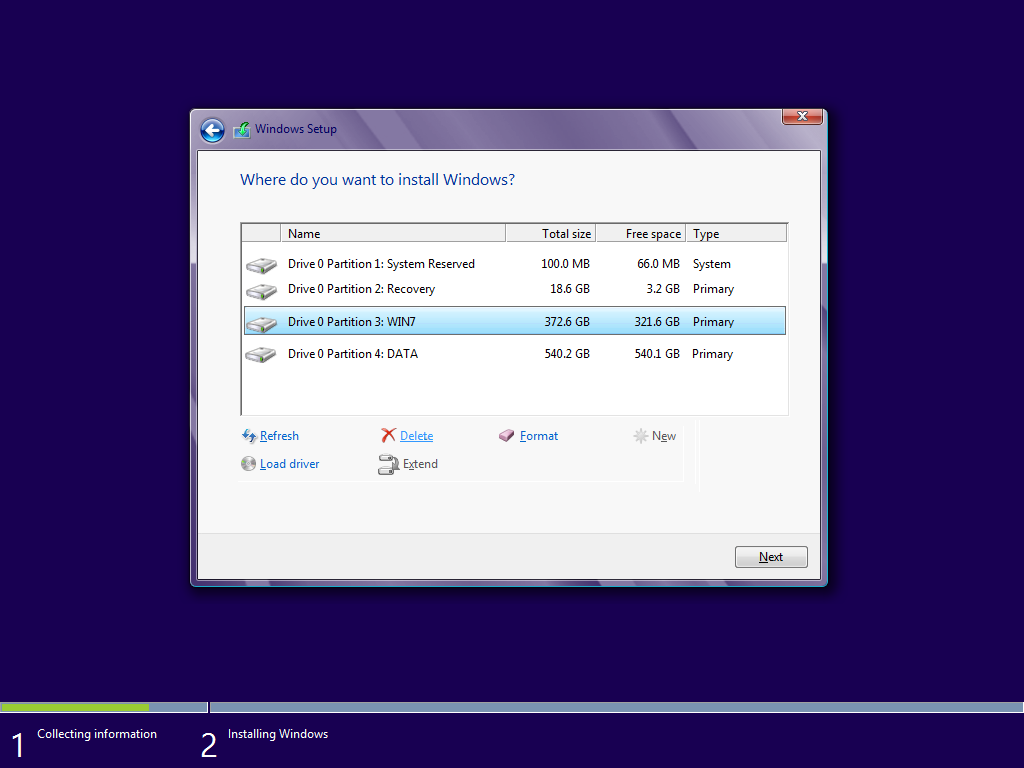 Now, you’ll select each of the partitions, one by one, and select the Delete command. When you do, you’ll see a confirmation prompt like the one shown in Figure I. Just click OK to delete the partition. 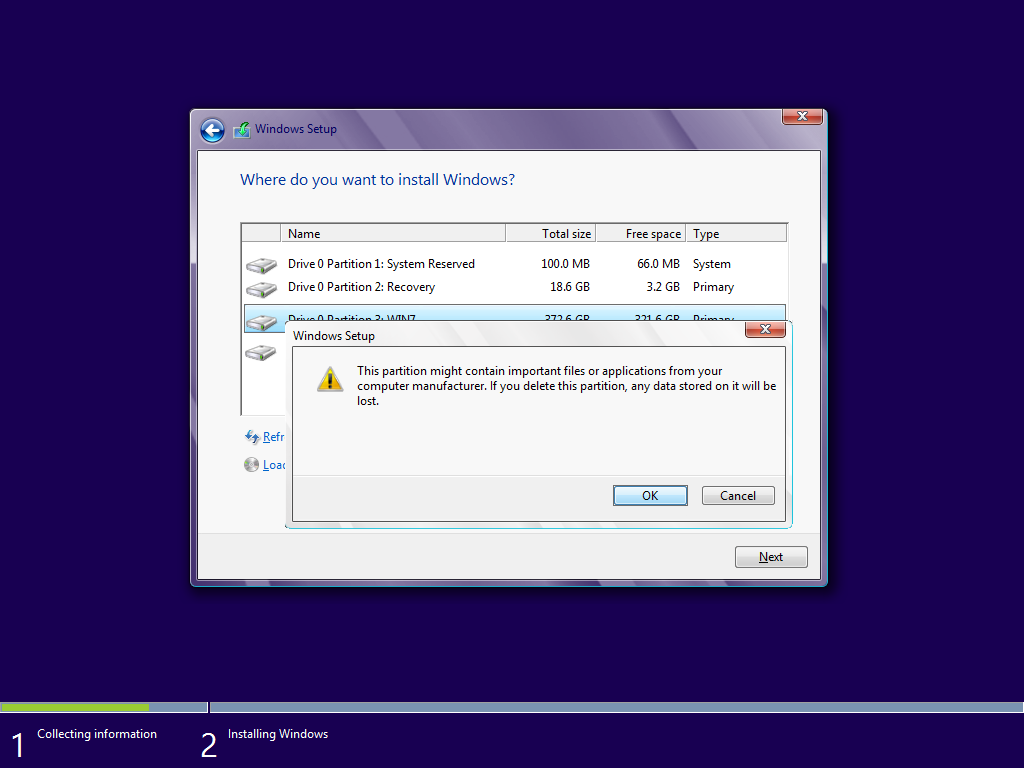 As you delete each partition, you’ll be prompted to confirm the operation.

Once you delete each of the existing partitions, you’ll see that all of the space will be combined together in one chunk labeled Unallocated Space, as shown in Figure J. While you could create a new partition and format it, you don’t have to. Windows 8 will automatically take care of that in the next step. So just go ahead and click Next. 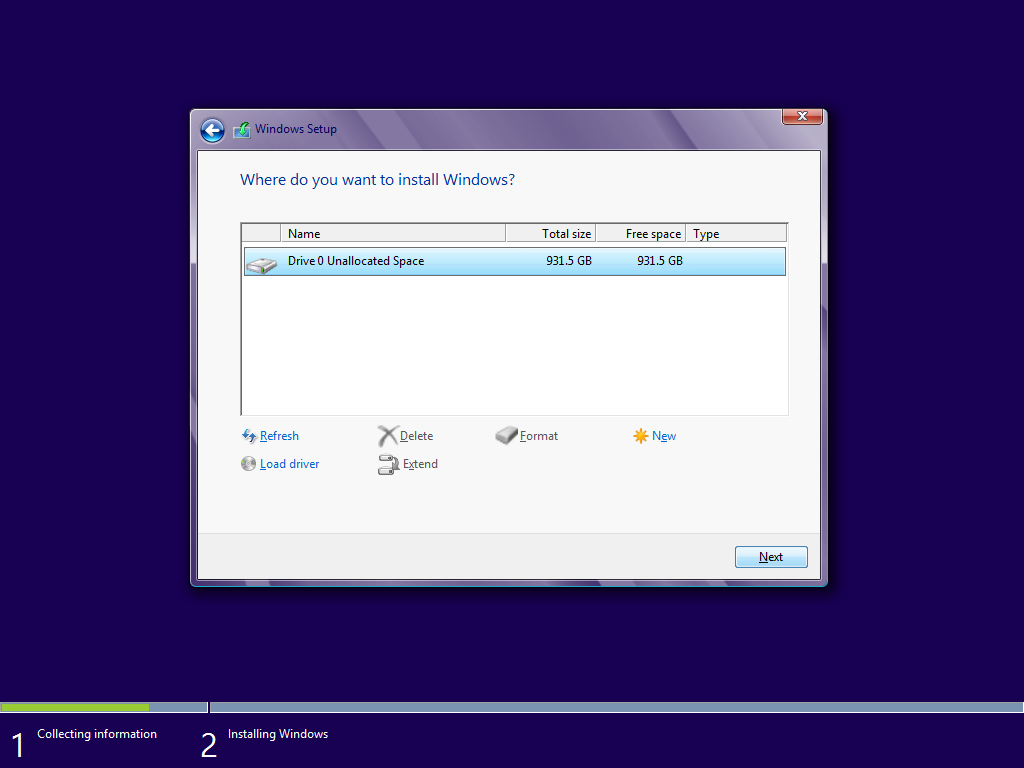 All of the space will be combined together in one chunk labeled Unallocated Space.

When you click Next, Setup creates the partition, formats it, and then instantly moves into the Installing Windows phase which begins with copying and getting files ready for the installation, as shown in Figure K. This process will take a while to progress though, so you can sit back and relax a bit. 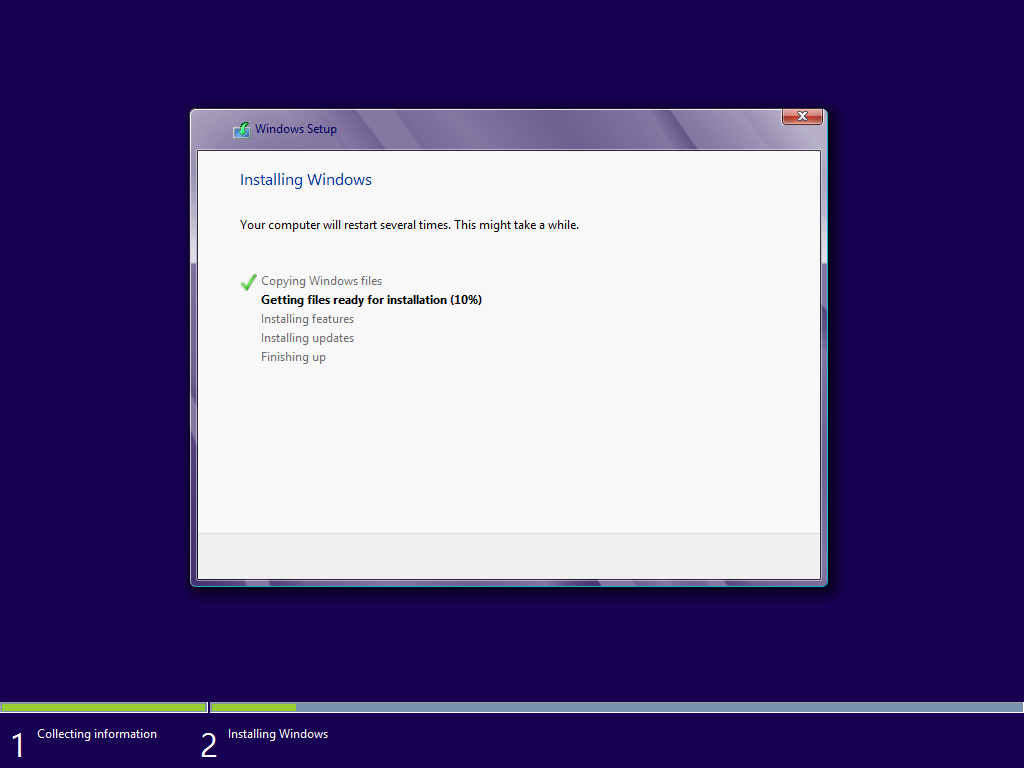 The Installing Windows stage begins with copying files from the DVD to the hard disk.

When this phase of the process is complete, Windows will alert you that it is going to restart in order to continue, as shown in Figure L. If you are really impatient and really quick, you can click the Restart now button. 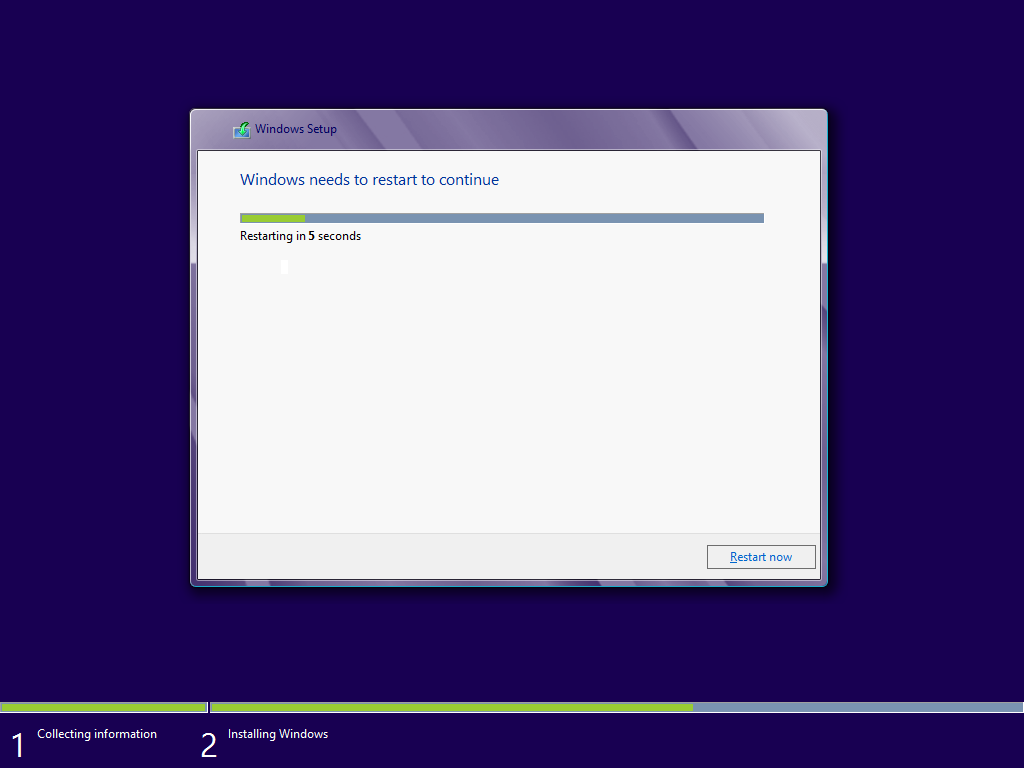 Windows will restart after the first part of the process is complete.

Upon restarting you’ll see the black screen with the blue Windows logo and see that Setup is getting devices ready, as shown in Figure M. As soon as that part of the process is complete, Windows will alert you that it is going to restart again, as shown in Figure N. 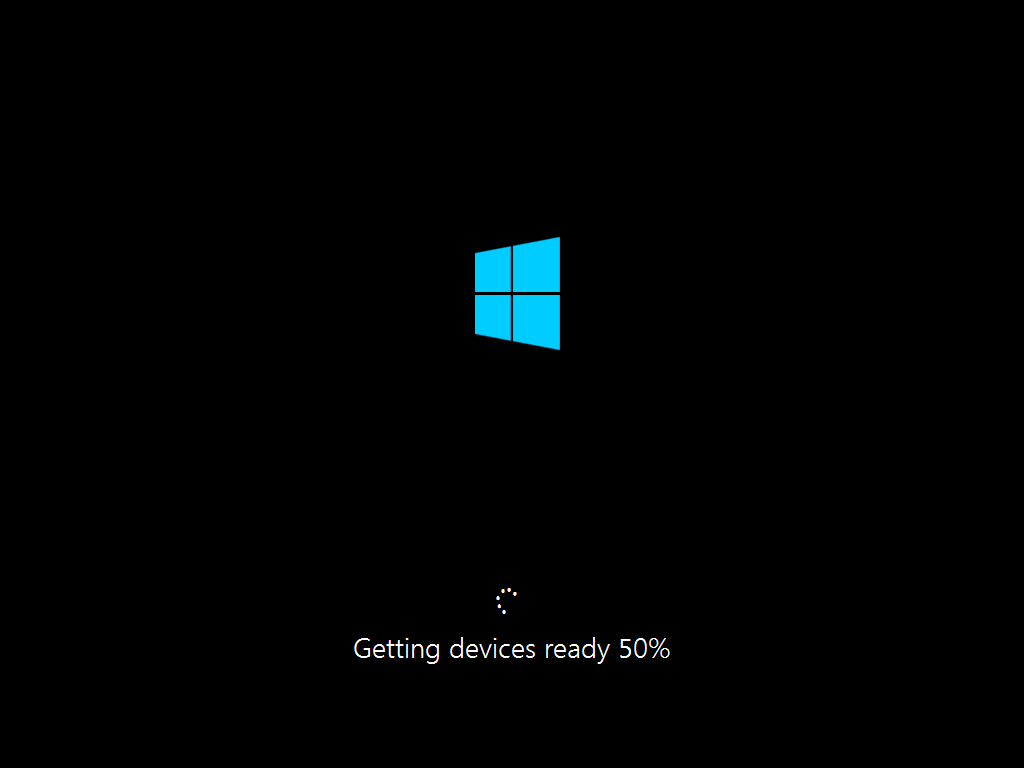 Windows Setup will get all installed devices ready to work with Windows 8. 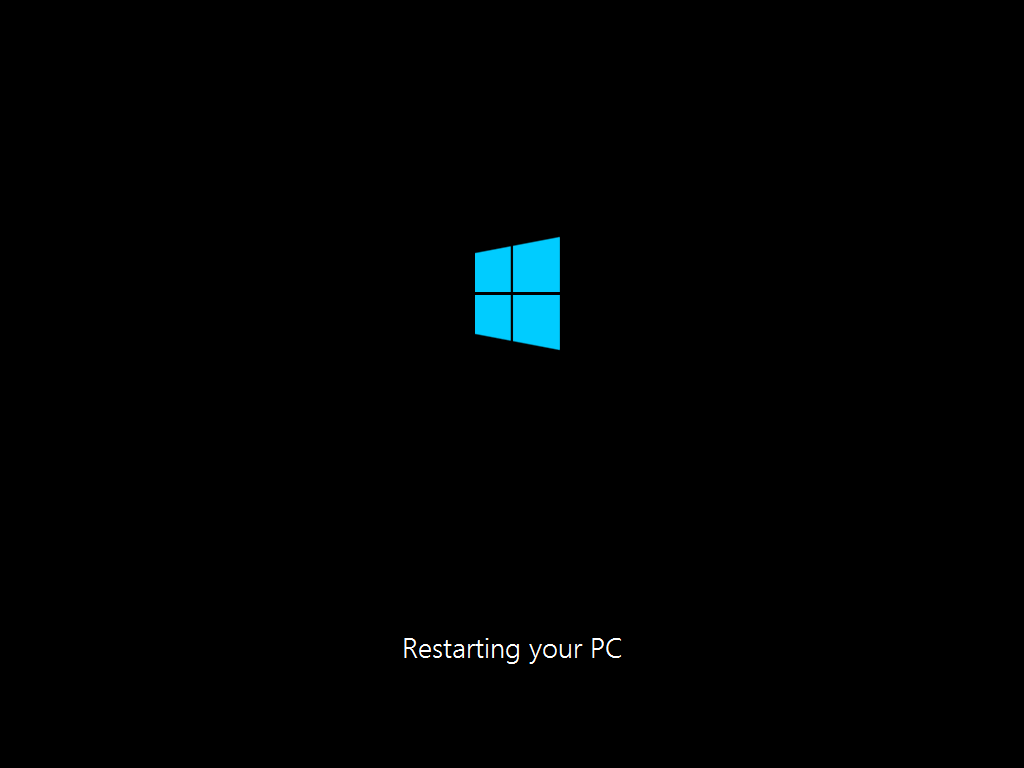 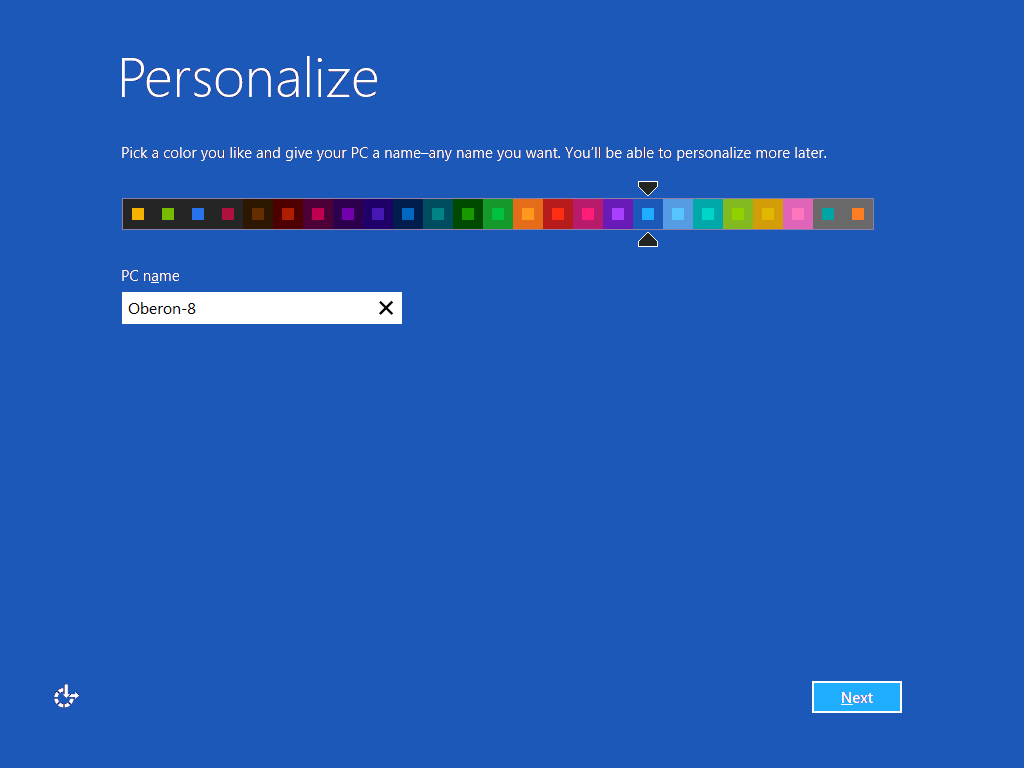 You can choose a color schema and name your computer. 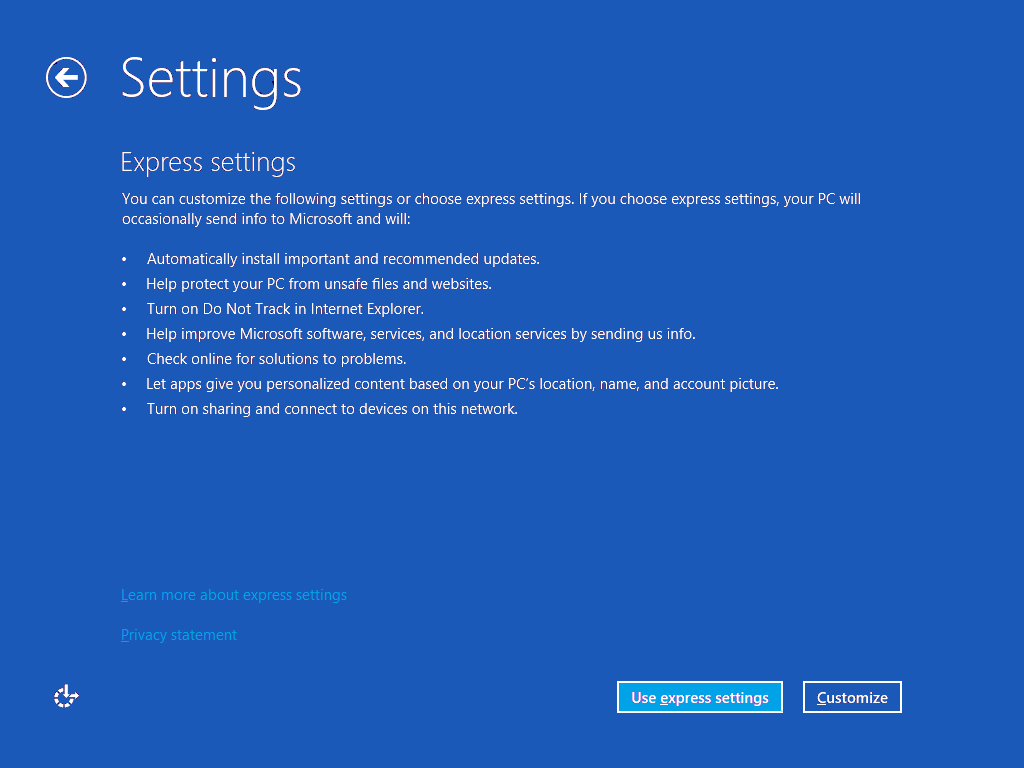 You can customize the settings or just go the express route.

On the next screen, you’ll choose how you want to sign on to Windows 8, as shown in Figure Q. While you can choose to sign in with a local account, I would recommend that you use an existing Microsoft (email) account, such as a Hotmail.com or a Live.com account. If you don’t have a Microsoft account, you can sign up for one or you can use any email address that you want and Windows 8 will create an account for you. 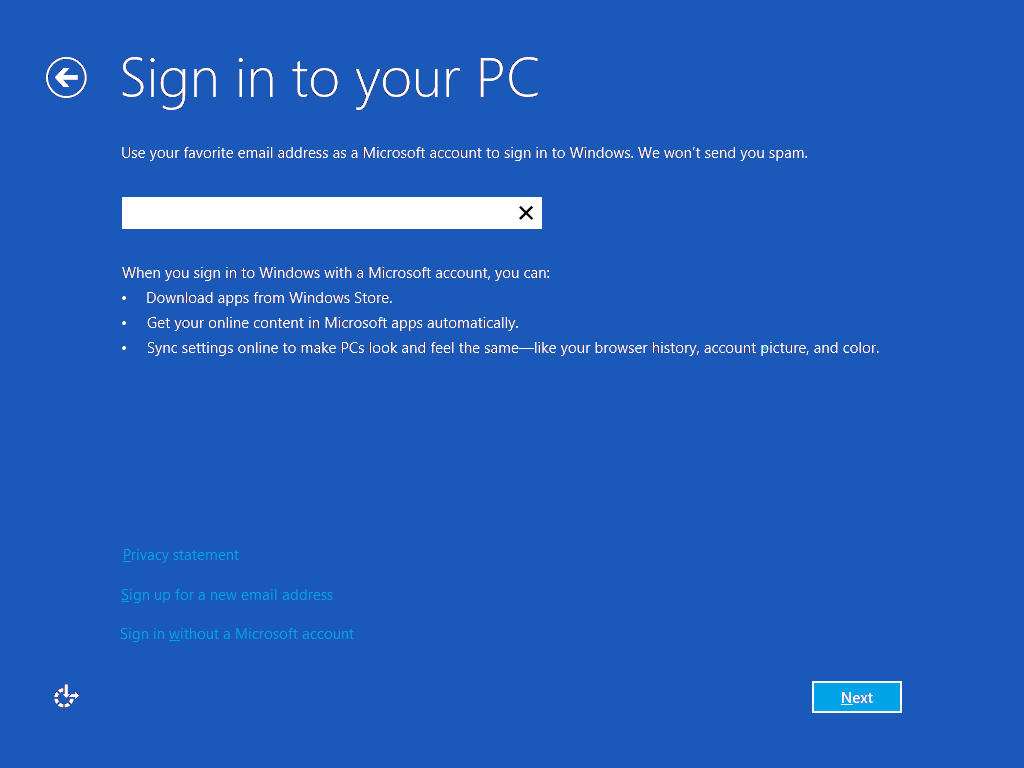 It will be to your advantage to use an existing Microsoft account or to create one.

After filling the details of your account on the next couple of screens, you’ll eventually see a screen that changes color as it alerts you the Setup is getting your PC ready. The green version of this screen is show in Figure R. 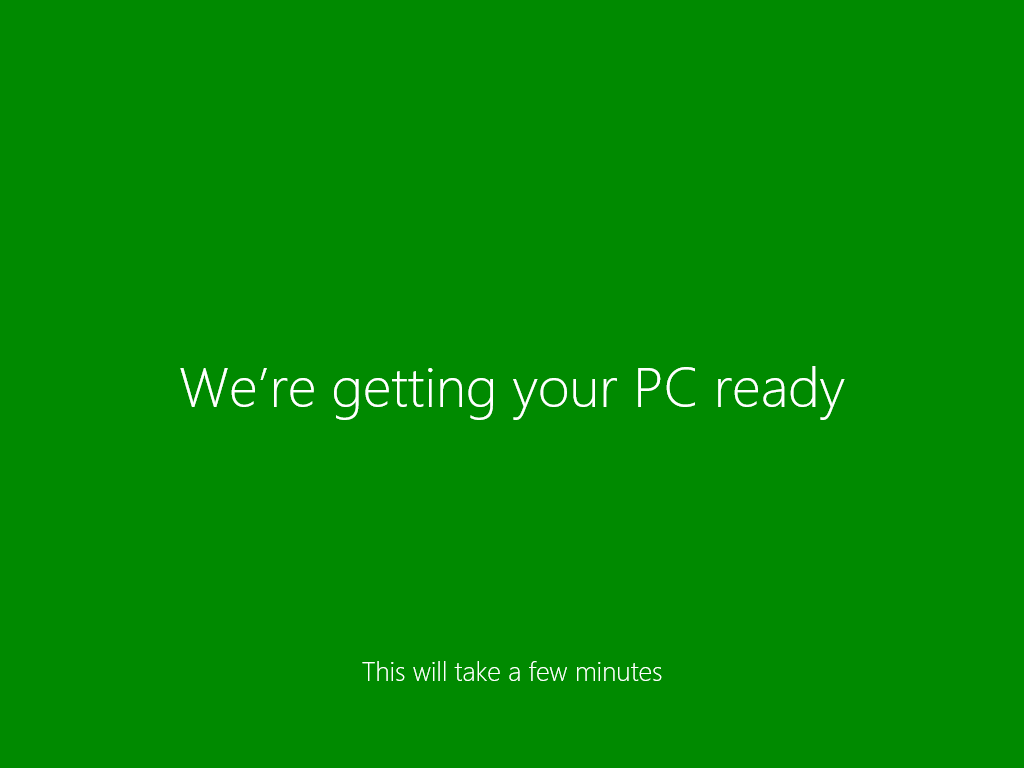 While this screen changes color often, it will remain for a few minutes while Setup works in the background.

As you may know, Windows 8 comes with a host of native apps for the Start screen interface that replace and add to the group of applications that used to come with previous versions of Windows. The screen shown in Figure S indicates that Setup is installing those apps. 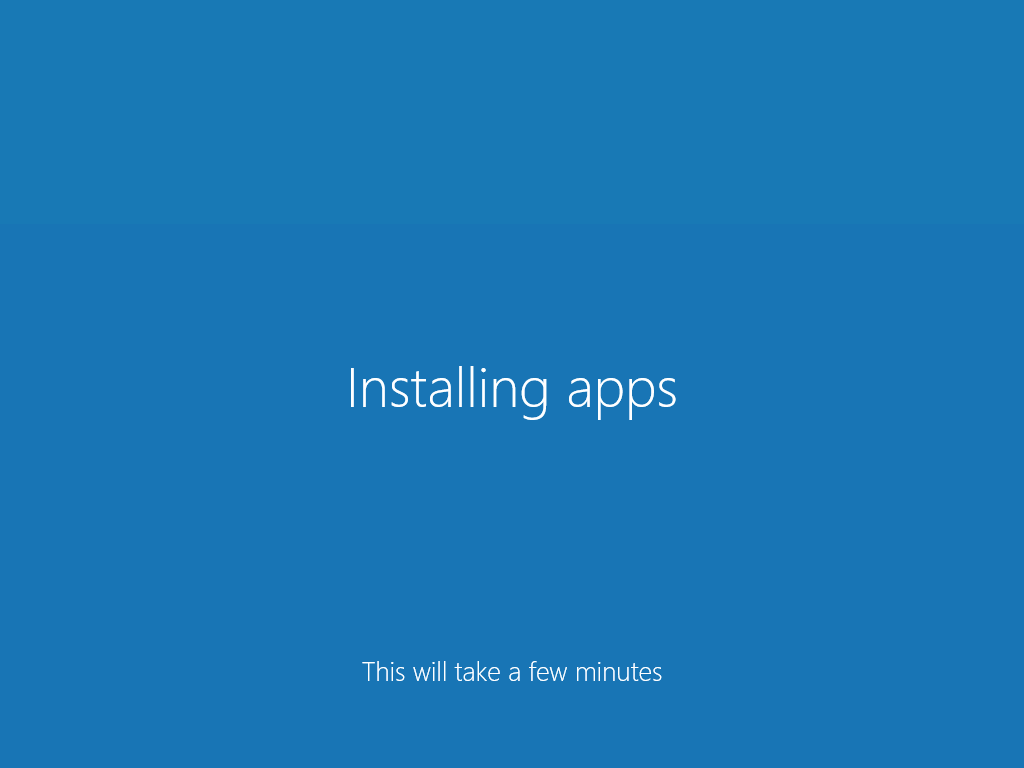 As the last step in the installation, Windows 8 installs its set of native apps.

Once the apps are installed, you’ll see the Start screen, as shown in Figure T, and can begin using Windows 8. 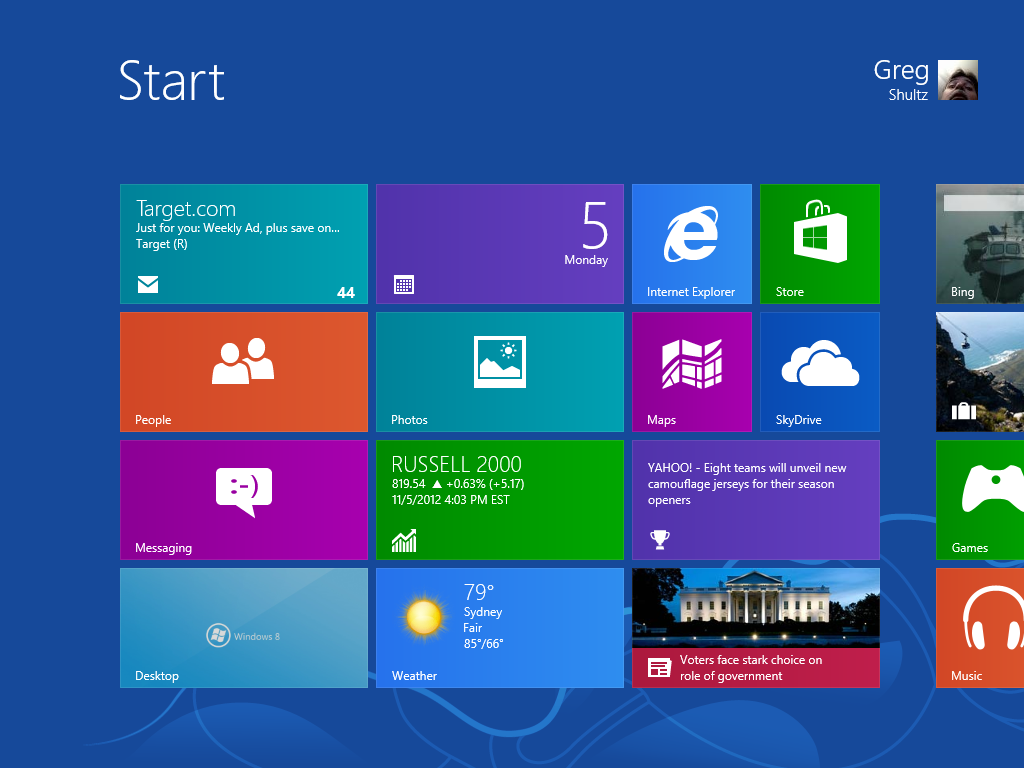 The Start screen appears when the installation procedure is complete.

Are you planning on performing a clean install of Windows 8? As always, if you have comments or information to share about this topic, please take a moment to drop by the TechRepublic Community Forums and let us hear from you.

Share: The complete guide to a Windows 8 clean installation
By greg shultz
My first computer was a Kaypro 16 \"luggable\" running MS-DOS 2.11 which I obtained while studying computer science in 1986. After two years, I discovered that I had a knack for writing documentation and shifted my focus over to technical writing.