As you may remember, on October 5th, 2012, at the Advertising Week convention in New York, Keith Lorizio, VP of U.S. Sales and Marketing at Microsoft said in an interview with Beet.TV that the company planned on having 100,000 apps in Windows Store within 90 days of the launch. His exact statement was:

“We’re expecting to aggressively pursue 100,000-plus apps over the first three months.”

He then went on to say that to make that happen, Microsoft was working closely with its partners and providing ample funding.

“We know that we have to have a very healthy ecosystem of apps, and we’re putting millions of dollars against the effort and working with publishers in order to get their apps live as quickly as possible,” Lorizio said. (You can see to the entire interview on the Beet.TV site.)

After I heard this prediction, I was both excited and a bit skeptical. On the one hand, if Microsoft was pushing for 100,000 apps in the Windows Store within 90 days, then there would truly be some great apps from which to choose. But, on the other hand, I had heard great predictions from Microsoft before.

Since, Windows 8 was launched October 26th, I figured that Microsoft was shooting for 100,000 apps by January 24th. Therefore, I decided that I would monitor the Windows Store and keep track of Microsoft’s progress.

In order to get a good gauge on the initial push, I decided to begin my countdown to 100,000 apps on October 24th. I figured that on the day of the Windows 8 launch, there would be a big surge and that by starting two days before the launch I would get a good baseline. So I created an Excel spreadsheet and tallied up all the Apps in each category. On each Monday since that day, I connected to the Windows Store and checked how many apps had been added to each category.

As you can speculate from the title of this blog post, Microsoft didn’t reach Lorizio’s prediction. Even so, the data that I gathered over the last 90 days provides an interesting look at the progress that Microsoft has made so far. Let take a closer look.

Keep in mind that my focus here is on the number of apps in the Windows Store. In no way am I favoring or highlighting any one app category over any other.

(It’s important to keep in mind that this data is only accurate as of January 28th, 2013. Between this date and the current date, Microsoft will surely have added more apps to the Windows Store.)

The Windows Store has 20 categories for its apps. The categories are as shown in Table A.

Alright, now let’s take a look at the graphs and see what we can see. The first graph, (Figure A) shows the total number of apps in the Windows Store each week. On October 24th, there were a mere 4,427 apps in the Windows Store. Three days after the official launch of Windows 8, that number had jumped up to 6,045. As you can see, in the first six weeks there were some pretty significant jumps. Then over the next seven weeks, things slowed down until they reached the 26,645 total on January 28th. 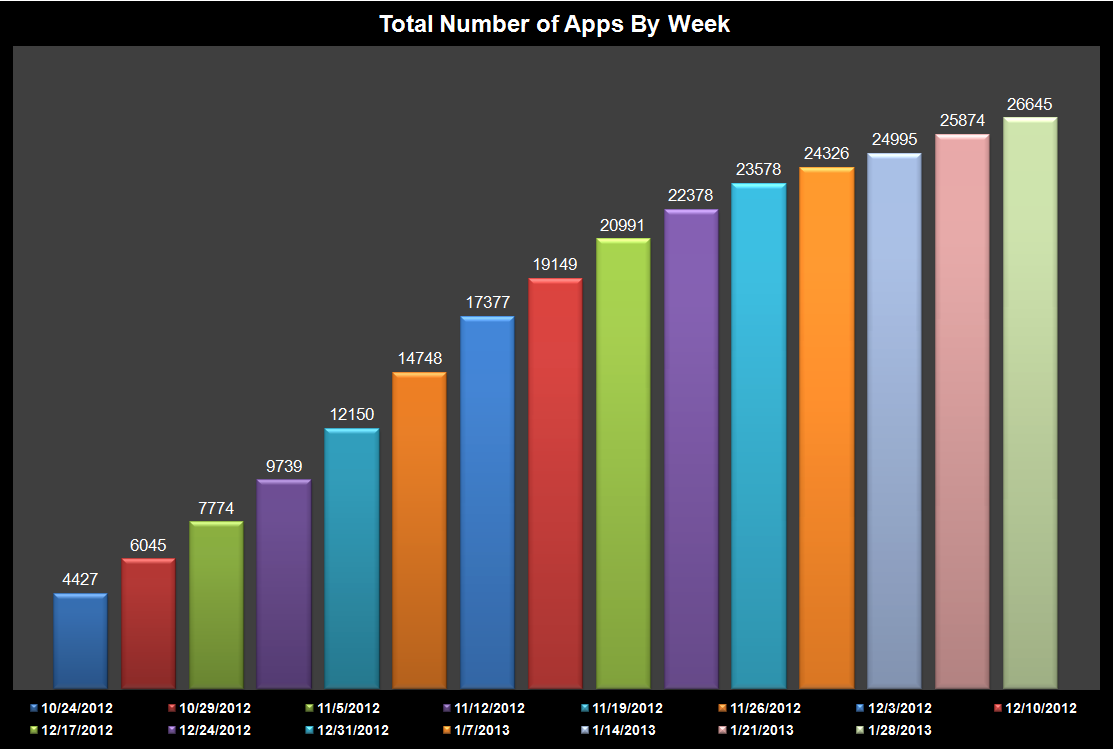 The total number of apps in the Windows Store each week. 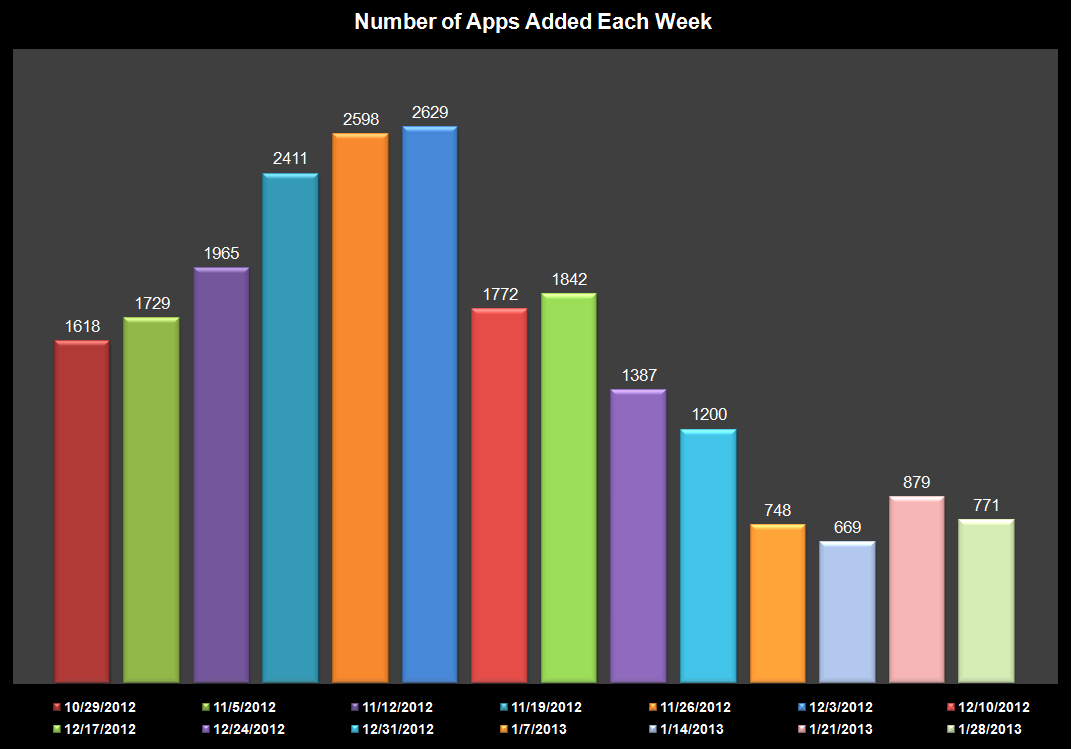 The number of apps added to the store each week

Now that we have taken a look at the totals, let’s take a look as the breakdown by category. Figure C shows the total number of apps in each category on January 28th. It is no surprise the category with the most apps is Games with a total of 4,116. The Education category, with 3,564 apps, just barely edged out the Entertainment category, with 3,355 apps. Books & Reference has a good showing with 2,926 apps as does Tools with 2,363 apps. With only 105 apps, Government came in last place. 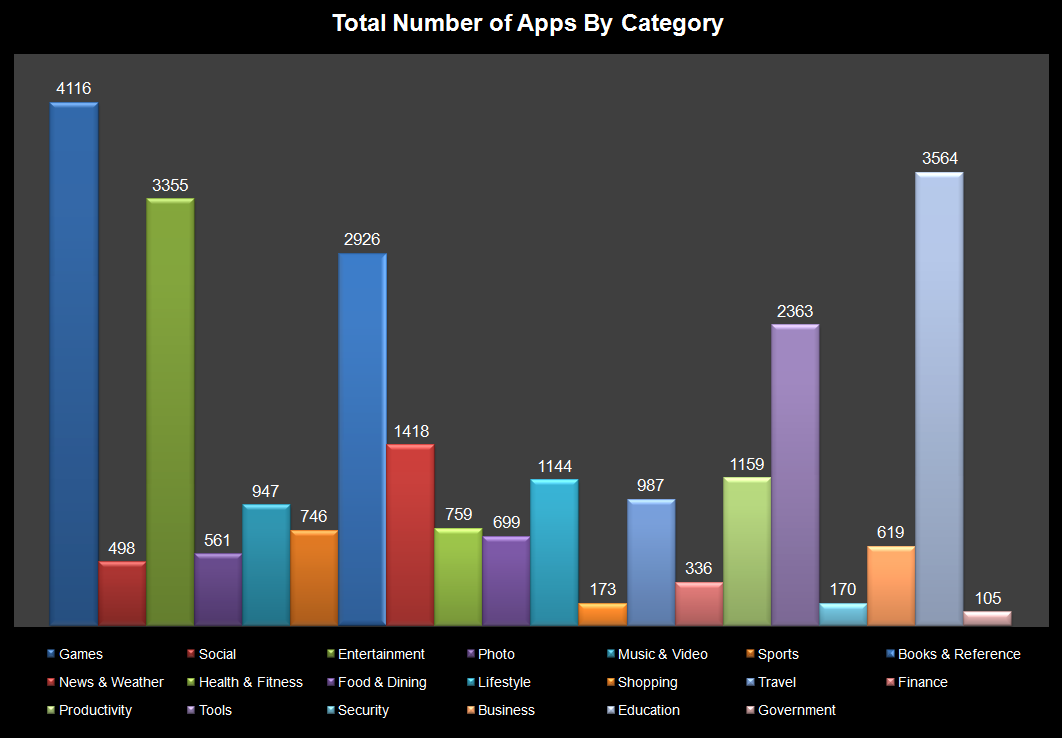 The total number of apps in the Windows Store on January 28th, by category.

Now, I also graphed out the number of apps added to each category each week, as shown in Figure D. As you can see, this graph begins with my 10/24 baseline, shows the increase in the first five days, and then begins the weekly tally between 10/29 and 11/5. While this graph is very busy, it shows that the top categories shown in Figure C consistently got big increases each and every week. 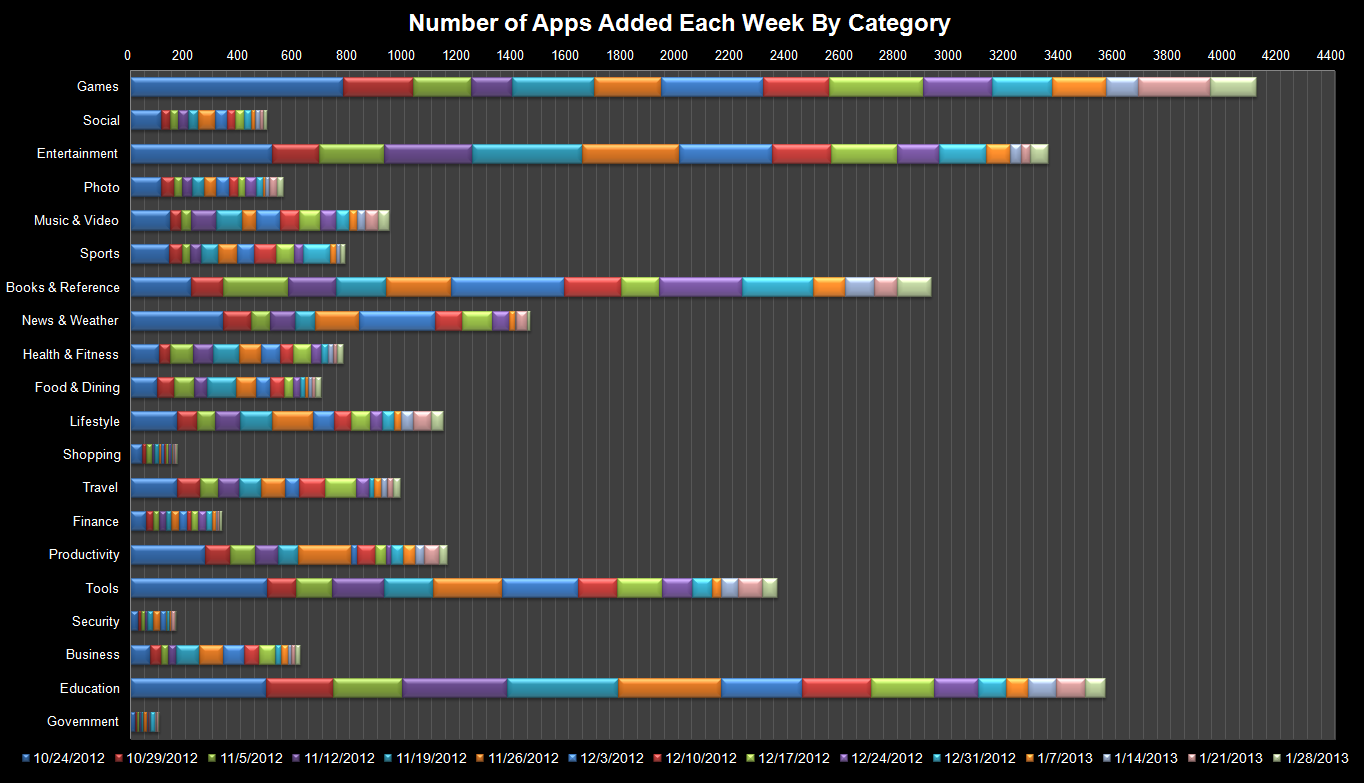 This graph shows the number of apps added to each category each week.

Did you think that Microsoft would have been able to spur the developer community to 100,000 apps in 90 days? Or were you a skeptic? As always, if you have comments or information to share about this topic, please take a moment to drop by the TechRepublic Community Forums and let us hear from you. (I intend to continue keeping track of the number of apps in the Microsoft Store and I will present a follow up once Microsoft does reach 100,000 apps.)

Share: The countdown to 100,000 Windows 8 apps falls short
By greg shultz
My first computer was a Kaypro 16 \"luggable\" running MS-DOS 2.11 which I obtained while studying computer science in 1986. After two years, I discovered that I had a knack for writing documentation and shifted my focus over to technical writing.