The personification of the periodic table’s elements

Wally Bahny reviews the English translation of the book Wonderful Life with the Elements: The Periodic Table Personified. Find out if he thinks it's worth a read. 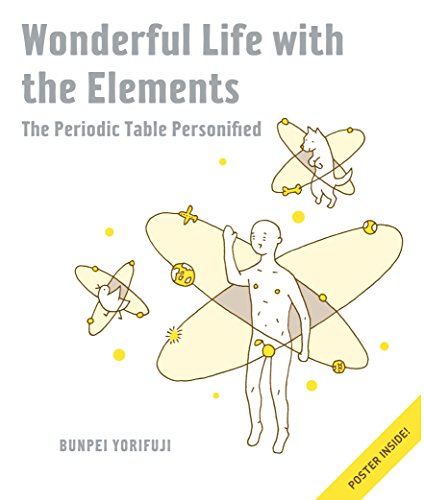 I recently read Wonderful Life with the Elements: The Periodic Table Personified by Bunpei Yorifuji. (Disclosure: I received a review copy by the book’s publisher No Starch Press.) This book takes the boring old periodic table and enhances it, giving the elements a life and spirit of their own all while teaching readers about those elements.

The book’s most prominent feature is the personification of the elements. The author uses various aspects of a person’s appearance, such as hair style, facial hair, body size, and clothing to convey the element’s family, length of time known, relative atomic weight, and usage area, respectively.  Also, three different lower-body designs convey the three different natural physical states: legs for solid, melted or liquid for liquid, and a genie-like bottom half for gas.

The author spends a large portion of the book dedicating between one-quarter and two full pages to each element. These profiles give details about the element’s state and basic information using the physical features of the elemental “people” and then continues to give other known details and some interesting trivia. Here are some examples of the personal features.

Hydrogen entry in Wonderful Life with the Elements. Image used with permission from No Starch Press. (Click the image to enlarge.)

Wonderful Life with the Elements was originally written for a Japanese readership in 2009 and was later translated to English; some of the examples are not translated well into English, such as some of the foods in the chapter on “How to eat the elements.” Even so, this book helps to make the 118 elements and the periodic table in general much more understandable and easier to learn. If it weren’t for some cartoon nudity in the bodies of some of the elements (which the author never describes the reason for), the book would even be a good learning tool for children. Either way, adults can learn a great deal about the elements in the world around them by reading this book.

For more information, take a look at the official web page at No Starch Press. The book and ebook combo retails for $17.95 US, but can be found the book for a discount at Amazon.com at the time of this writing.

Share: The personification of the periodic table’s elements
By Wally Bahny