With Start Menu Reviver you get the traditional functionality of the Start menu, but with a Windows 8 Modern UI look and feel.

Like many keyboard and mouse Windows 8 users, I wished that Microsoft had not completely removed the Start Menu from Windows 8. However, up until recently I have resisted the temptation to just install one of the many Start Menu replacements as I sought to really give the Windows 8 interface a chance. While I have had some feelings of success in this endeavor, I always seem to encounter a certain level of frustration using the Start screen or any of the workarounds that I have developed.

Recently, I decided that enough was enough and began experimenting with some of the available Start menu replacements. I’d install one, use it for a while, uninstall it, and then install another one.

I initially tried Classic Shell and found that while did a very nice job of putting the old Start Menu back where it belonged, it just felt so, well, classic. I really liked Stardock’s Start8 as it provided everything that I was used to plus more. I then tried IObit’s Start Menu 8 and found that it was a really nice Start menu replacement. However, the more that I used these and some of the other Start Menu replacements, the less that I felt like I was using a new operating system.

Then I discovered Start Menu Reviver from ReviverSoft and was immediately impressed with the truly unique approach! With this app you get the traditional functionality of the Start menu, but with a Modern UI look and feel, as shown in Figure A. Beyond the look and feel, Start Menu Reviver is easy to use and has a very nice set of features that make the program very versatile and extremely useful. And, it’s FREE.

In fact, Start Menu Reviver is such a great melding of the old and new user interfaces that if Microsoft had put something like this in Windows 8 from the get go they sure would have saved themselves a lot of grief. If they had put something like this in Windows 8.1, they would have been able to salvage the new operating system in the eyes of enterprise IT professionals. 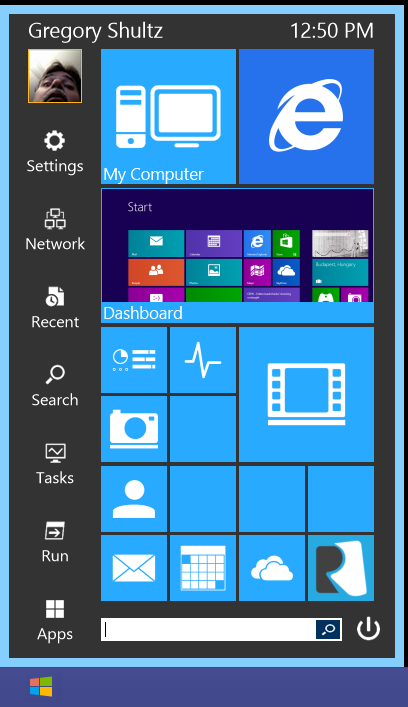 Now, I know that after reading this article some of you are going to think that I have gone off the deep end in my emphatic praise for this tool, but I can’t help myself. Start Menu Reviver has really revived my excitement about Windows 8! So much so that if I were a Microsoft executive, I would seriously be looking to acquire ReviverSoft and incorporate this product into the operating system. Let’s take a closer look.

Once you download Start Menu Reviver (.exe), installing the program is relatively easy. Just run the executable file, respond to the User Account Control prompt, and follow along with the onscreen prompts. The installation begins with a wizard interface and ends with a very nice set of video tutorials, as shown in Figure B. 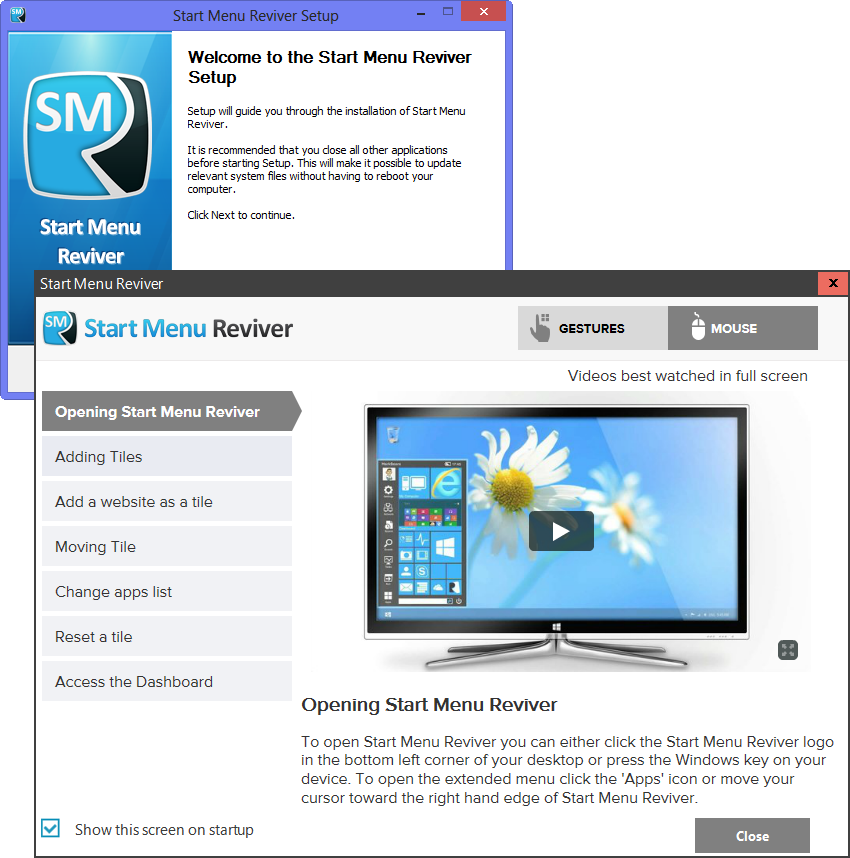 The video tutorials are quick and effective demos of the product’s main features.

As you can see, there are tutorials for mouse and gestures. While I primarily use Start Menu Reviver on a system with a mouse, I’ve found that the tile based design of this menu works equally well on a touch based system. This is particularly true since the menu can be configured to display in three sizes Small, Medium, and Large, with the latter working very well for tablets.

When you begin using Start Menu Reviver, you’ll quickly discover how versatile the program is and marvel at how well it integrates into the new operating system’s user interface with a minimum of interference. I said it earlier, but I’ll say it again, Start Menu Reviver provides a great melding of the old and new user interfaces.

The program also has the ability to show the Desktop on startup – in a roundabout way. When you choose the option, the system will boot to the Start Screen and then switch to the Desktop. Not exactly what I expected, but it occurs very quickly and the ultimate result is the same.

In a fashion similar to the All Programs flyout menu on Windows 7’s Start menu, Start Menu Reviver has the Apps flyout menu that can show Desktop Apps, Modern Apps, or both. With the flyout showing, you can pin Apps to the menu’s tiles with a simple drag and drop. In addition to showing Apps, the flyout can also show recently accessed items or the contents of My Documents. There’s also a Search box associated with the Apps flyout menu and it works just like the Start Search box in Windows 7’s Start menu.

If the menu’s default color scheme doesn’t mesh with your desktop wallpaper and window colors, you can change it. Just delve into the Color Scheme tool and change the colors of five distinct items with access to the full spectrum of colors in Windows color palette.

Now that you have a good idea of some of the features in Start Menu Reviver, let’s take a look at how you add items to the menu’s tiles.

As I mentioned, the Apps flyout menu, which you can access at the click of a button or configure to automatically expand on hover, can show Desktop Apps, Modern Apps, or both. So, just click the Apps button and you can drag items from the menu over to the tile squares. As you can see in Figure C, I’ve replaced the majority of the default tiles with my own desktop apps. In fact, if you look closely, this image shows me placing Word in a tile using simple drag and drop. 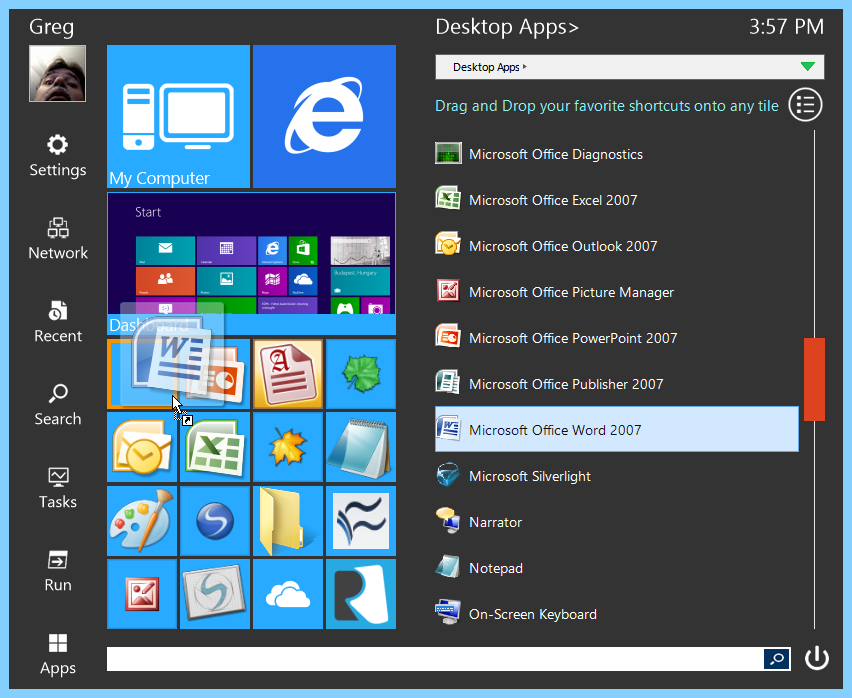 Pinning apps to the menu tiles is facilitated by the Apps flyout menu.

If you compare the examples shown in Figures A and C, you’ll note that each big square can contain a single tile or four smaller ones. Once you have four tiles in a square, you can move them around to arrange them how you like. They will move around just like the tiles on the Start Screen. To remove app tile, just right click and select Reset tile.

As you will notice, the flyout menu in Figure C is showing Desktop Apps, but there is a drop down menu from which you can display Modern Apps as well as files and folders. While his makes it easy to pin shortcuts to the menu tiles you can also easily launch any application, access any folder or any file right from the flyout menus. Accessing folders and files from the flyout menus can be a real time saver, because you don’t have to first launch File Explorer.

And speaking of files and folders, they too can be pinned to the menu’s tiles with drag and drop. This comes in quite handy when you’re consistently working with the files and a specific folder. You can also pin Web sites to menu tiles as well. Looking back at Figure C, you can see that I have a folder tile and a TechRepublic tile on the menu. To add a Web site, just right click a tile and select the Add tile command. You’ll then see the Add tile dialog box, as shown in Figure D, and you can configure the link and the tile. 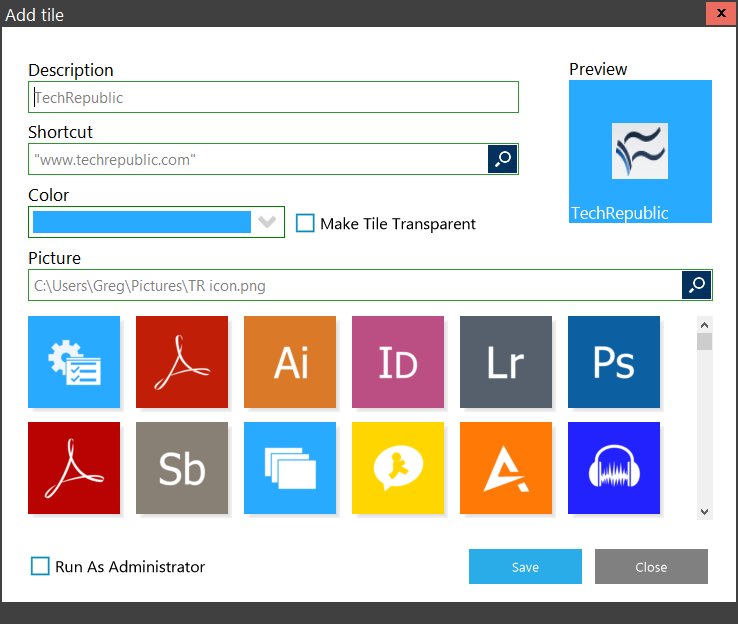 In addition to apps and folders, you can pin Web sites to the new Start Menu.

If you want more tile space, the My Computer and Internet Explorer tiles can each become four smaller tiles and Start Screen/Dashboard can become eight smaller tiles.

While having a Start button and a menu full of tiles to launch apps is Start Menu Reviver’s main function, there is a lot of peripheral functionality that you’ll want to take advantage of. In Figure E, I’ve numbered the items which I’ll describe in Table A. (In the screen shot, I’ve blurred the tiles to make it easier focus on the other items.) 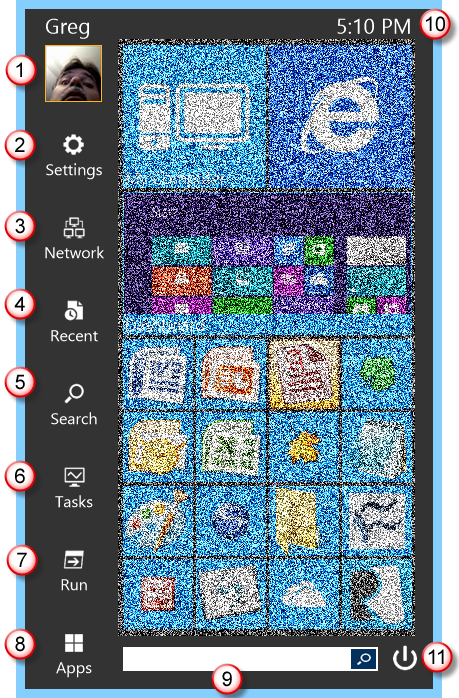 Beside the tiles, Start Menu Reviver has a lot of other functionality.

The brief context menu allows you to exit the program as well as launch Windows/File Explorer. 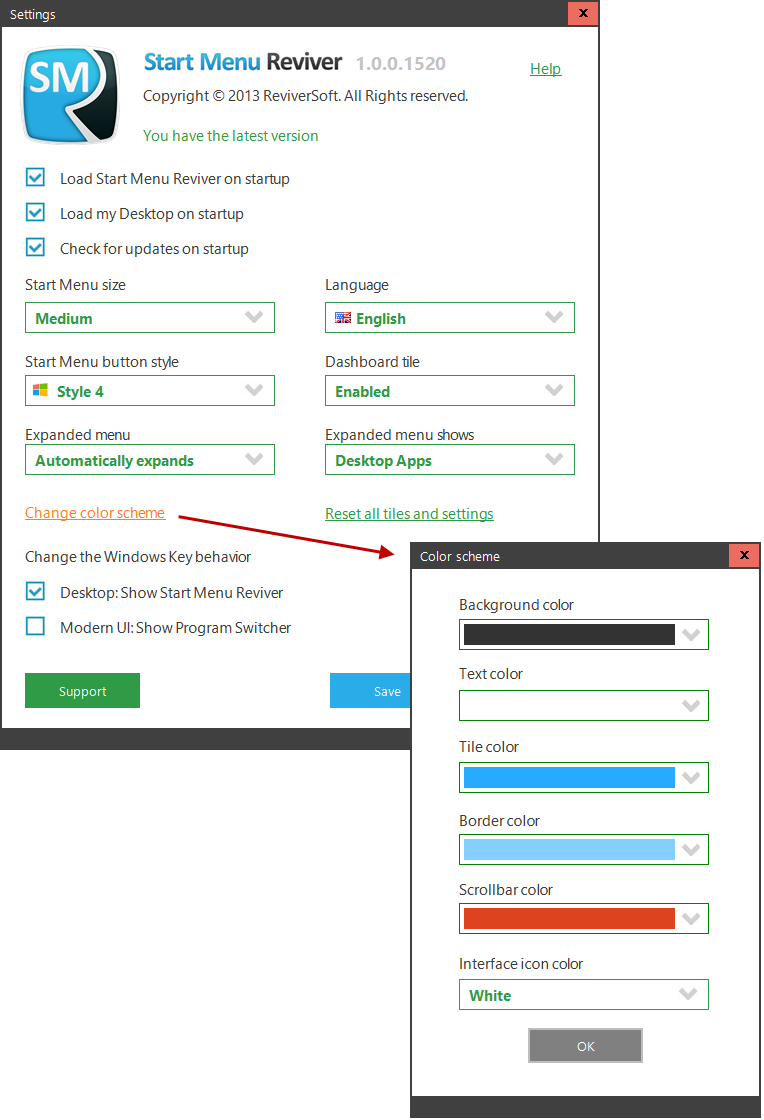 You can configure all of Start Menu Reviver’s options from Settings.

One more thing – when it comes to software, I know the folks at ReviverSoft are consummate professionals, but I should point out that their marketing folks are really good too! Just take a look at the Start Menu Reviver commercial. Remind you of another company’s commercials?

Share: The Windows 8 Start Menu reimagined and reinvigorated
By greg shultz
My first computer was a Kaypro 16 \"luggable\" running MS-DOS 2.11 which I obtained while studying computer science in 1986. After two years, I discovered that I had a knack for writing documentation and shifted my focus over to technical writing.