Ubuntu Unity: Keyboard shortcuts key to ease of use

Ubuntu Unity is a very good desktop entry, but for some users keyboard shortcuts might be a necessity. In this how-to article, Jack Wallen demonstrates not only some of the common keyboard shortcuts, but how to create unique shortcuts that can help to make your work even easier.

I’ve been using Unity now for a week or so and I still stand behind what I stated in my last blog. Ubuntu Unity is a winner and, I believe, will help to make users focus more on the work at hand and less on the desktop. But there is one issue with Unity that might slow down a few types of users. If you’ve worked with Unity much, you know that getting to some of the settings and/or administration tools can be a hassle. Instead of just clicking System | Administration, now it’s required to click on the Applications launcher, and then either search for the tool you want, or select the System category and then search through the list of installed System tools for the desired tool. That can be a pain, especially if you are either in a hurry or frequent those administration tools.

Here is a list of some of the more common keyboard shortcuts for Ubuntu Unity:

There are also some tricks you can do with your mouse, such as:
But now, what about those user-configured keyboard shortcuts? Let’s create one for the Ubuntu Update Manager. Here are the steps: 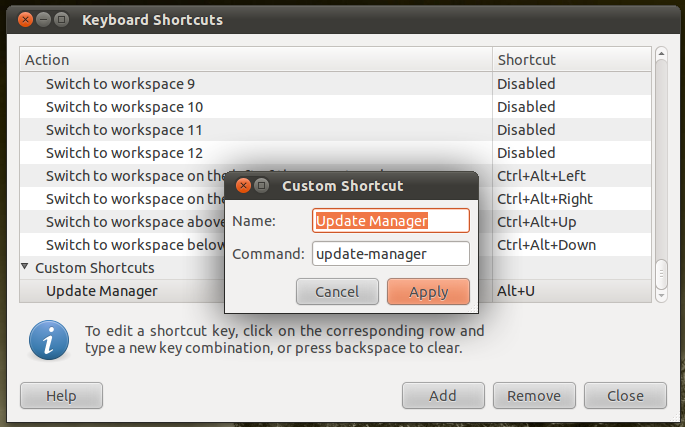 It’s not a perfect solution, but it’s one that will allow anyone using Unity to create keyboard shortcuts to get to tools that might not be so readily available. Of course, for the tools you use the most, simply create an icon for the tool in the launcher. How do you do that? Simple:
That’s it. You can do that with as many applications you need. Once the amount of applications has exceeded the size of the Launcher you will have to scroll through them.

Final thoughts
Much to the chagrin of the haters out there (of which I was one) Unity is actually a very nice desktop with features that will make work simple. And although keyboard shortcuts are not new to any desktop — by any stretch of the imagination — they will become much more of a necessity on this desktop than they might have been on your previous desktop.

Share: Ubuntu Unity: Keyboard shortcuts key to ease of use
By Jack Wallen
Jack Wallen is an award-winning writer for TechRepublic, The New Stack, and Linux New Media. He's covered a variety of topics for over twenty years and is an avid promoter of open source. For more news about Jack Wallen, visit his website jackwallen.com.