Mention drive-by malware to nefarious types and they smile, silently thanking the invisible iFrame. Ever wonder why? 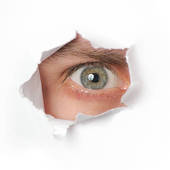 During a seminar about drive-by malware, the speaker briefly touched on iFrames; mentioning they’re invisible, difficult to detect, and the reason why drive-by malware is so successful.

As I listened, I realized I didn’t know how iFrames worked, and what she meant by invisible. As one who subscribes to “Know thy enemy,” that’s not good. Right then, I resolved to change that.

First thing I discovered: millions of websites incorporate iFrames, but they’re visible. By definition, an iframe (Inline Frame) is an HTML tag that allows an HTML document to be embedded inside another. The IFrame element inserts content from another source, such as an advertisement, into the web page containing the iFrame. Here’s an example:

That code inserts the following:

OK, but how does one make the iFrame invisible? For that, I asked André M. DiMino, well-known security analyst and founder of DeepEnd Research, for help:

Here is what an actual (live at this writing, but de-fanged) invisible iframe looks like:

There is no malware within the iframe itself, just a link to another
site that will attempt the exploit.

I asked Andre’ if the user had to activate the iFrame:

No, the exploit can install and execute the malware without any user knowledge. Simply visiting the web site will initiate a connection to the redirect site. Once the redirect is made, the exploit installs by leveraging a vulnerability in the user’s browser or plug-in.

I now get how iFrames become invisible. What I don’t get is how an iFrame gets positioned. I mentioned this to Lenny Zeltser, veteran security professional, author, and SANS instructor. He offered the following explanation:

Attackers can create a malicious website, but then they need to bring visitors to that website. This can be done in many ways. For instance, the attacker might use aggressive SEO techniques to show the malicious site in search results.

Another approach involves placing malicious advertisements. The attacker’s ad could include code that instructs the victim’s browser to visit the malicious website.

Anything we can do?

I asked André and Lenny if there was anything we could do to prevent drive-by malware? They came up with the following suggestions:

André also mentioned tools like NoScript should be of some help. That was all I needed. I’ve been meaning to see if Giorgio Maone, creator of NoScript, was feeling better. Here’s what Giorgio had to say:

NoScript does protect against this because permissions given to a certain page are not cascaded to its inclusions and embeddings (including iFrames) from different origins. Therefore, even if the compromised site is in your whitelist, the third-party site under the attacker’s control is still blocked.

I’m often asked why the “Allow all this page” NoScript command needs to be repeated multiple times before unblocking all sources. That’s because NoScript only gives permission to the resources you see in the menu when you issue the command, rather than giving a free pass to content with unknown origins.

This way you’re always given a chance to examine every origin before allowing it (e.g. by middle-clicking its “Allow xyz.com” menu item), and permissions can never be given blindly.

What does it mean?

The goal of drive-by malware is to take temporary control of a target’s web browser; then force it to download and execute a malicious application all without the victim knowing. Fortunately, the entire operation hinges on invisible iFrames. If we can uncloak them, the whole process falls apart.

I’d like to take a moment and thank the three gentlemen for their help. I’ve known each for a while now and their expertise and willingness to help is appreciated.

Delivered Weekdays
Sign up today
Share: Uncloaking invisible iFrames
By Michael Kassner
Information is my field...Writing is my passion...Coupling the two is my mission.