The Untangle open source gateway is one of the more attractive free SOHO products. Version 6.0 has been released with new features and fixes. Rick Vanover showcases them in this blog post.

The Untangle open source gateway is one of the more attractive free SOHO products. Version 6.0 has been released with new features and fixes. Rick Vanover showcases them in this blog post.

I’ve covered various features of the Untangle gateway, such as QoS, Spyware control, Active Directory authentication, and the new Re-Router product, in different posts here on the TechRepublic network blog. On December 1, Untangle has released version 6 of the open source router product. Version 6 has been released for the traditional product, the full install appliance that is installed by the Untangle .ISO image. Untangle also offers a few pre-installed servers for sale with the gateway software configured.

Here are some of the key features of version 6.0 of the Untangle appliance:

-New Web-based user interface — The Java Swing client has been replaced with the new Web 2.0 interface.

-Appliance branding options — Now the Untangle appliance can have your own logo and names used throughout the appliance.

The 6.0 version of the gateway currently exists as a new installation only. Currently, there is not a direct upgrade from a version 5 installation. There are plans to add that functionality, however. The installation and configuration is straightforward as was the prior version. One of the new features for the 6.0 version that is the most notable is the new Web 2.0 interface; it contains the applet within a browser in lieu of the previous Java applet. Figure A shows the new interface. 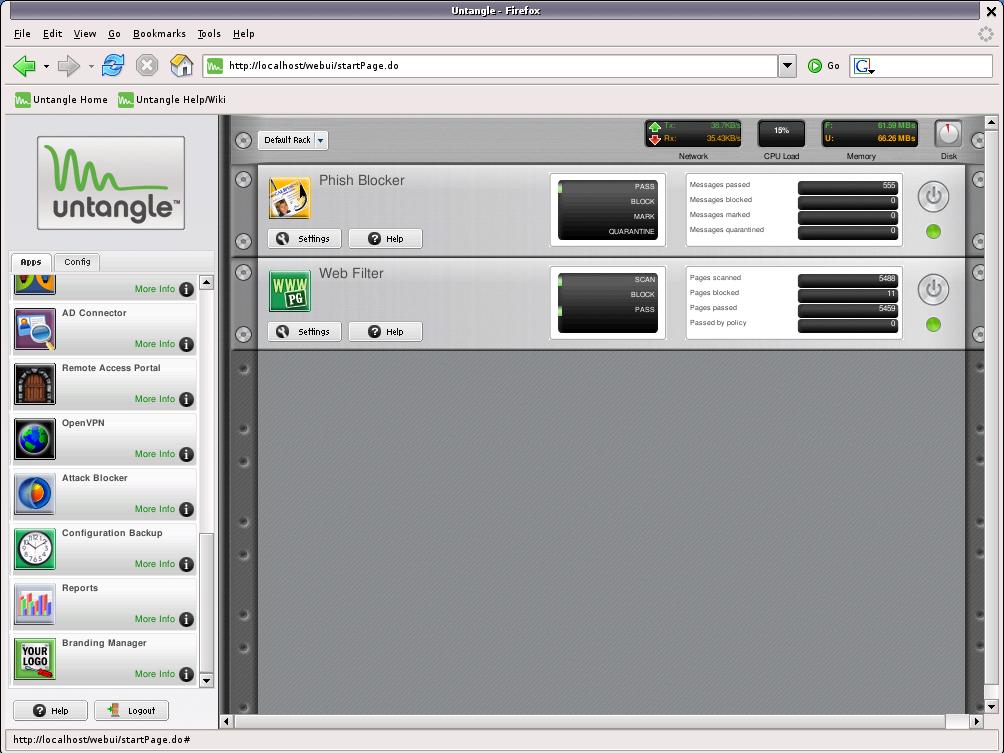 While most configuration tasks can be performed in the Web interface from any client, some operations must done on the Untangle console. This includes downloads of free or commercial add-ons that populate the virtual rack. The Untangle router remains a free download and is available from the Untangle Web site.