Greg Shultz walks you through the entire procedure of using Windows 7 Anytime Upgrade to upgrade to Windows 7 Ultimate.

The other day I was discussing with a friend the benefits of dual-booting Windows 8 using a VHD (Virtual Hard Disk) as I wrote about in the article Dual-boot Windows 7 and Windows 8 using a VHD. My friend has Windows 7 Home Premium installed on his computer and was saying that he would give anything for a way to add the Bootable VHD feature to his system so that he could experiment with Windows 8 and keep his Windows 7 setup intact. (As you know, the ability to boot from VHD is only available in Windows 7 Ultimate and Windows 7 Enterprise.)

When I told him that there was a way he could do so, he was all ears. When told him that it would cost him about $140, he was still open to the idea saying that if it would allow him to install Windows 8 on a VHD, it would be worth it.

Even though the Upgrade will not alter any of your data or other configuration settings, I recommend that the first thing that you’ll want to do is create a System Image from within Windows 7’s Backup and Restore. When you do, you’ll end up with a complete image of your hard disk. That way, if anything out of the ordinary were to occur as you follow the steps for performing the Windows Anytime Upgrade, you will be able to return to your current configuration.

Furthermore, I recommend that you also create a separate backup of your data. Maybe just make copies of all your data files on CD/DVD or on an external hard disk. While it may sound like overkill, having an extra backup will give you peace of mind.

Once you have Backup and Restore up, select the Create a System Image option and choose your backup location. As you can see in Figure A, I used a DVD-RW drive on my system. 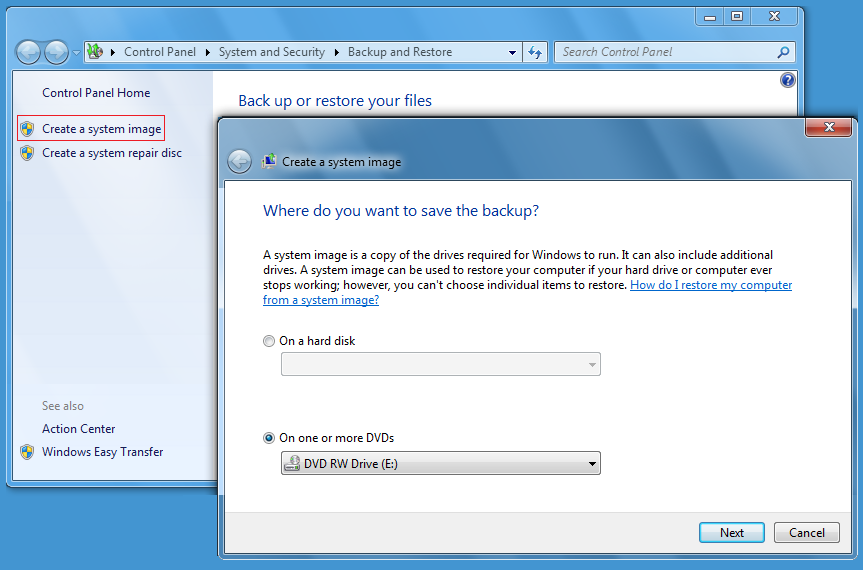 On my test system, I’ll use DVDs to create my system image.

As you can see in Figure B, on my test system all the partitions on the drive are selected by default. To initiate the operation, just click Start backup. On my test system with a 500GB hard disk, it took over an hour and required eight DVDs. 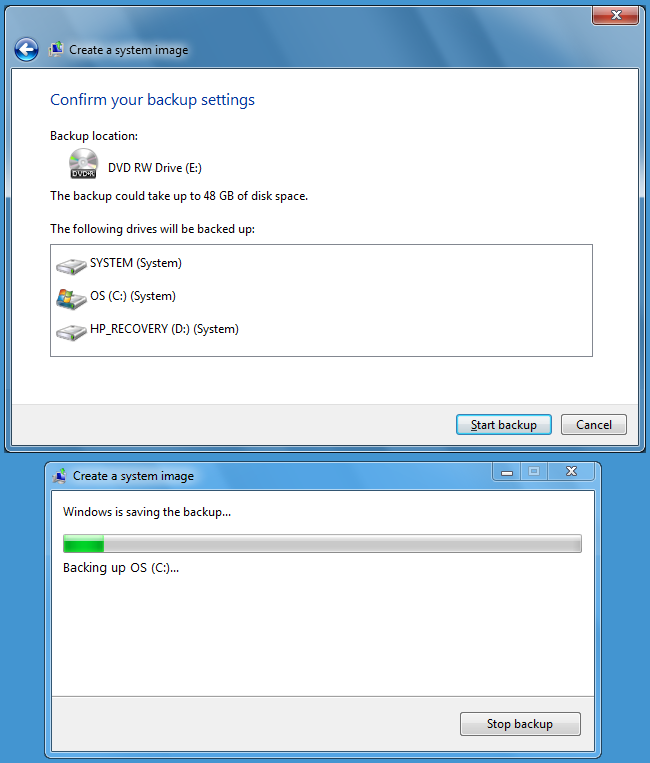 Creating a System Image on DVDs takes a little while. 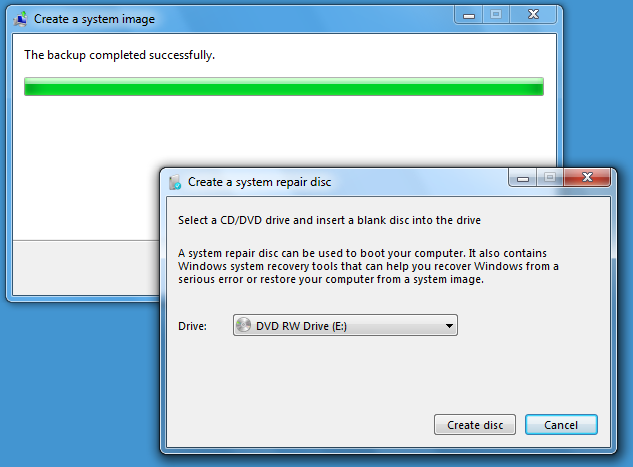 As soon as the System Image is complete and before you begin the Windows Anytime Upgrade procedure, I recommend that you reboot your system to make sure that you have a clean slate.

Getting a Windows Anytime Upgrade key 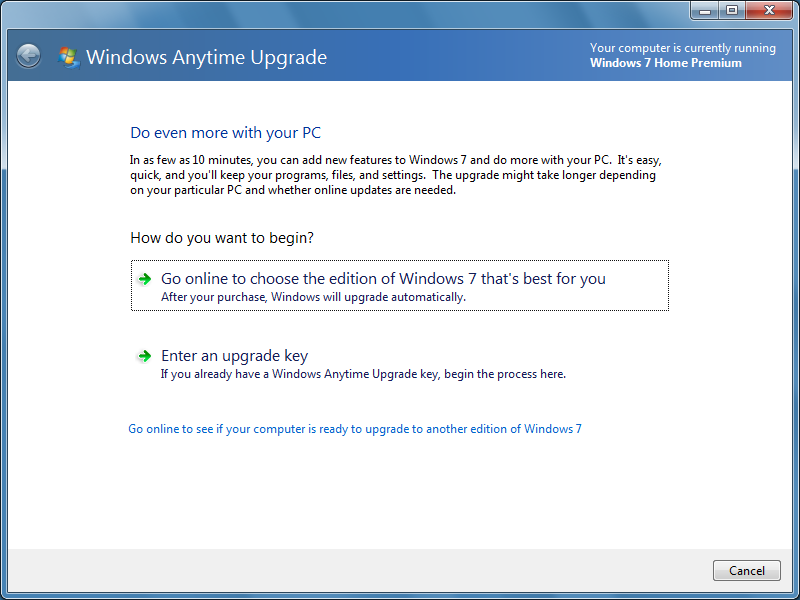 The Windows Anytime Upgrade feature is built into Windows 7.

When you click the Go online button, you’ll see the next Windows Anytime Upgrade window, shown in Figure E, and will click the Buy button under the Ultimate heading. Once you work through the steps, you’ll instantly receive the Windows Anytime Upgrade key and the upgrade will begin immediately. (Don’t worry, you will have the opportunity to print out a receipt and a copy of the receipt will be sent to you via email.) 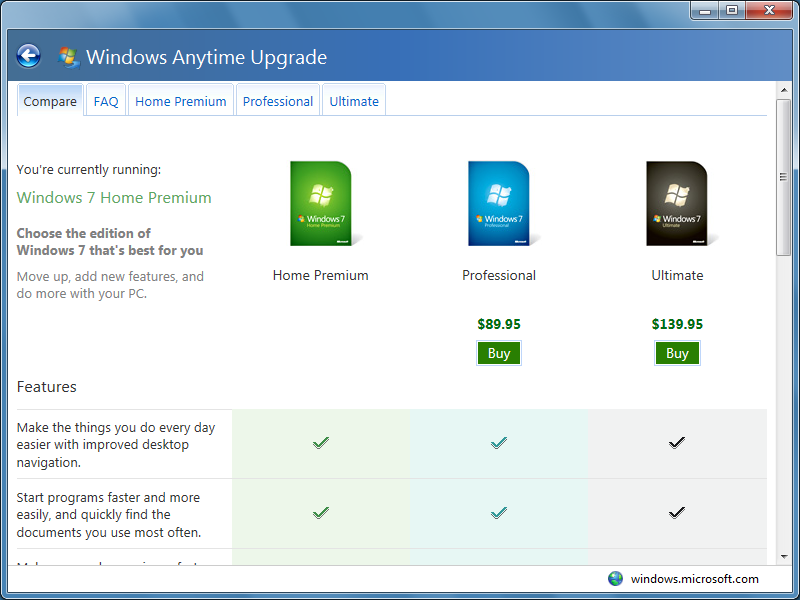 You can go online to the Microsoft site and purchase a Windows Anytime Upgrade key. 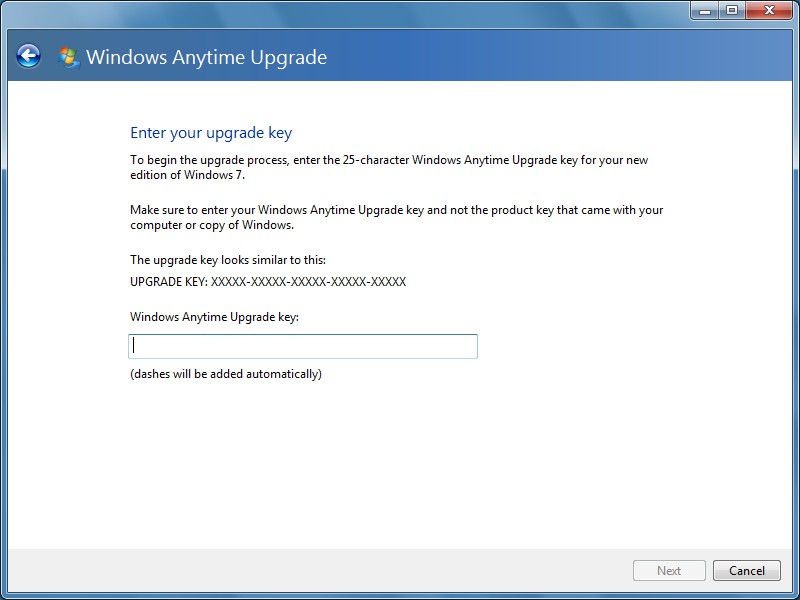 If you purchase a retail version of Windows Anytime Upgrade, you’ll have to manually enter the 25 character alphanumeric key.

After you enter the key and click Next, Windows Anytime Upgrade will verify that the key that you entered is valid, as shown in Figure G. It takes just a few seconds to complete this step. 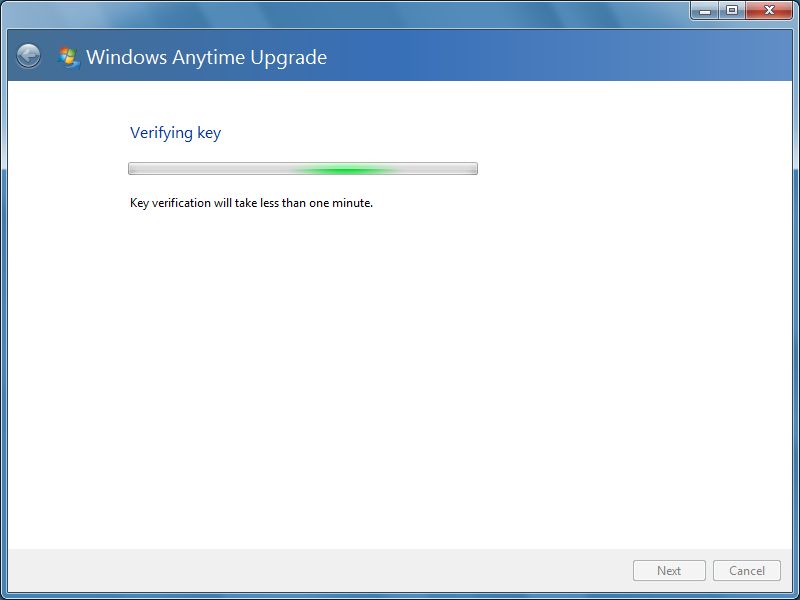 It will take a just a few seconds for the system to verify the Windows Anytime Upgrade key.

You’ll then be prompted to accept the license terms for the upgrade, as shown in Figure H. If you want all the details, just click the Microsoft Software License Terms link. 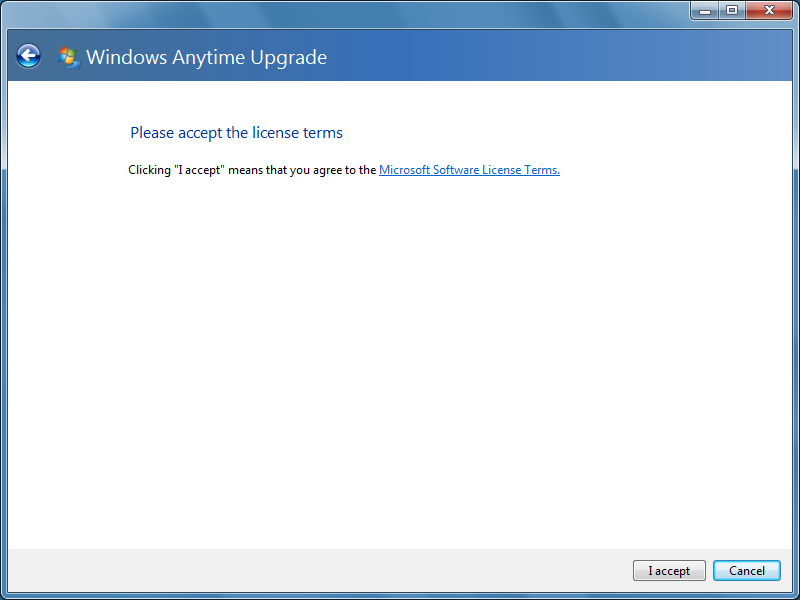 Of course, you have to accept the license terms.

As soon as you click the I accept button, you’ll see the next screen which prompts you to make sure all of your open programs are closed, as shown in Figure I. To begin the procedure, just click the Upgrade button. 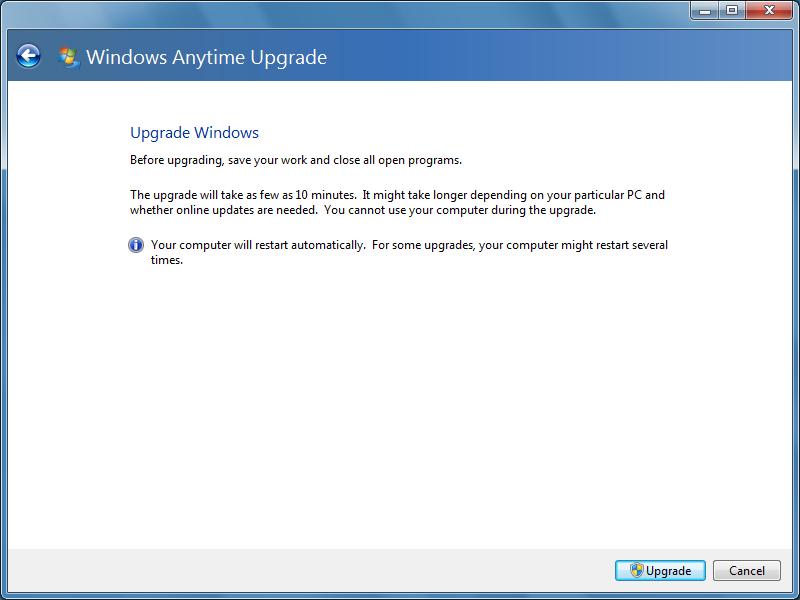 Before the actual upgrade begins, you’ll be reminded to close all open programs.

Once the Upgrade begins, as shown in Figure J, it will take anywhere from 10 to 20 minutes depending on whether updates are needed. On my example system, only one update was needed. 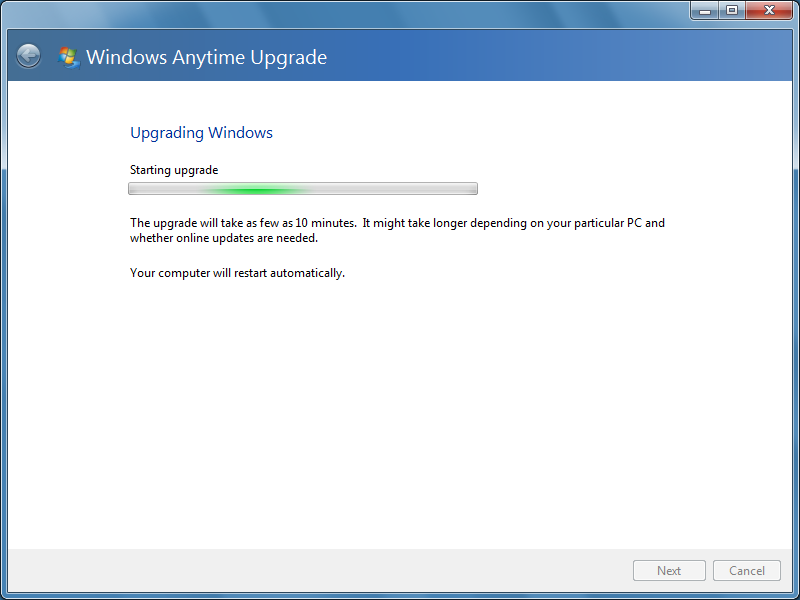 The upgrade will take about 10 minutes to complete.

During the Upgrade your system will reboot several times. I noticed that after the first reboot, you’ll see a screen like the one shown in Figure K, which shows that at this point the operating system is still Windows 7 Home Premium. 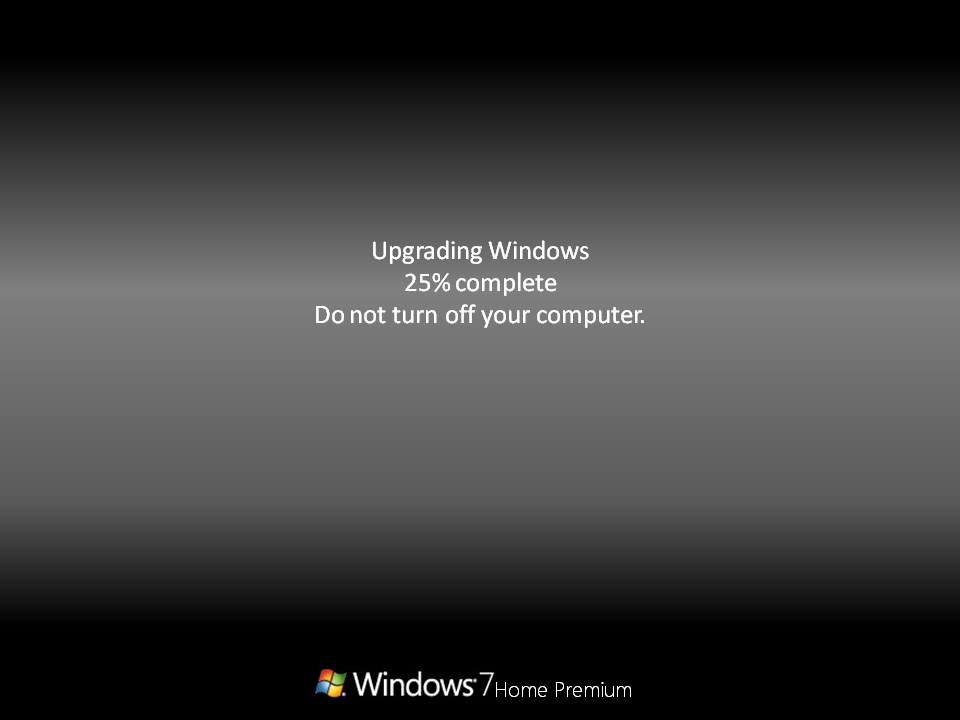 At this point the operating system is still Windows 7 Home Premium.

However, after the second reboot, you’ll see that the screen is showing that the operating system is now Windows 7 Ultimate, as shown in Figure L. 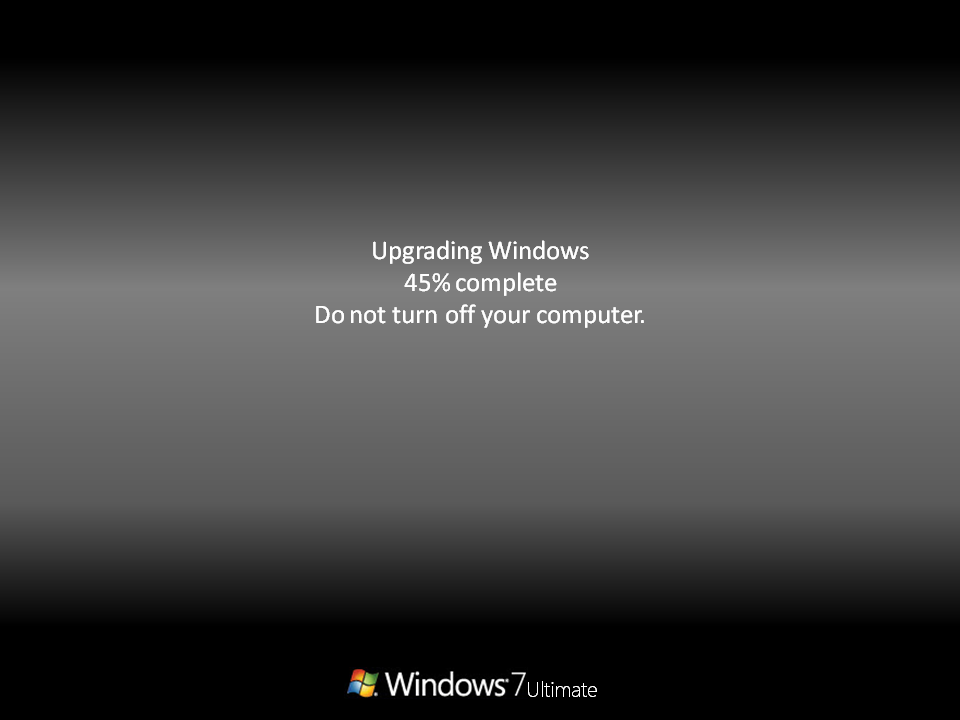 After the second reboot the operating system is now Windows 7 Ultimate.

After the upgrade’s final reboot, you’ll see that the Logon screen now shows the operating system as Windows 7 Ultimate. When you log on for the first time, you’ll see the last screen in the Windows Anytime Upgrade procedure, as shown in Figure M. To complete the operation, just click Close. 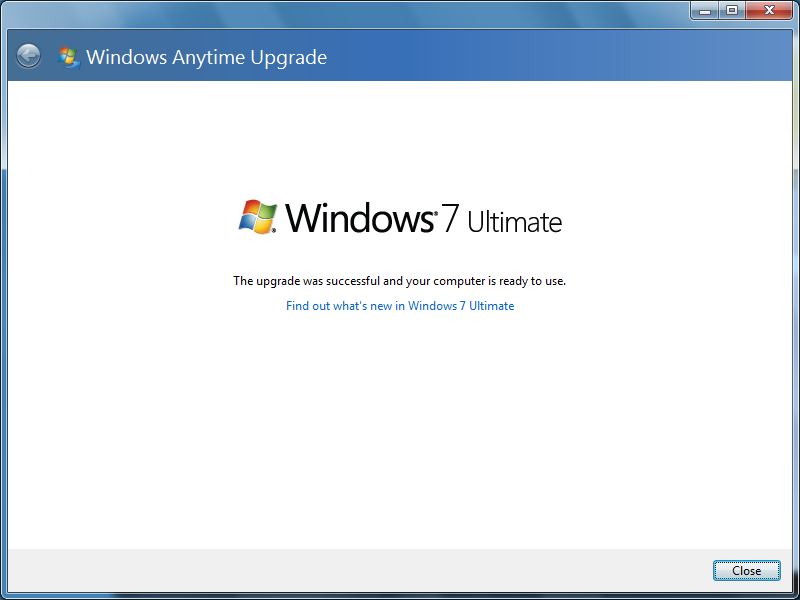 The last screen in the Windows 7 Anytime Upgrade procedure will appear on the screen when you log on to Windows Ultimate for the first time.

At this point, you can read my article Dual-boot Windows 7 and Windows 8 using a VHD and take advantage of the Bootable VHD feature in Windows 7 Ultimate.

Are you running Windows 7 Home Premium? Would you like to set up a Windows 7/Windows 8 dual boot system using a VHD? Will you take advantage of Windows Anytime Upgrade to move from Windows 7 Home Premium to Windows 7 Ultimate? As always, if you have comments or information to share about this topic, please take a moment to drop by the TechRepublic Community Forums and let us hear from you.

Delivered Weekdays
Sign up today
Share: Upgrade to Windows 7 Ultimate with Anytime Upgrade
By greg shultz
My first computer was a Kaypro 16 \"luggable\" running MS-DOS 2.11 which I obtained while studying computer science in 1986. After two years, I discovered that I had a knack for writing documentation and shifted my focus over to technical writing.